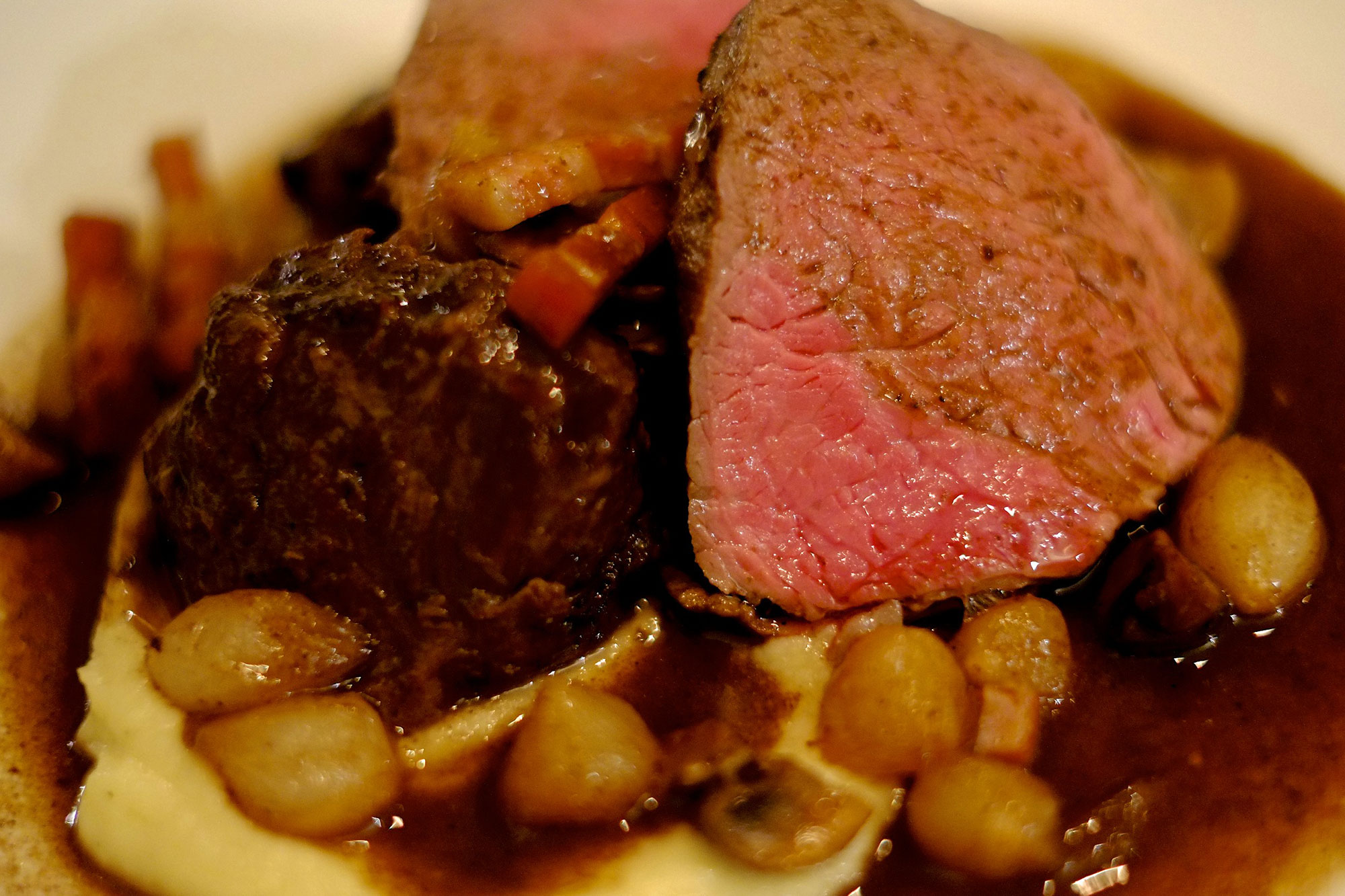 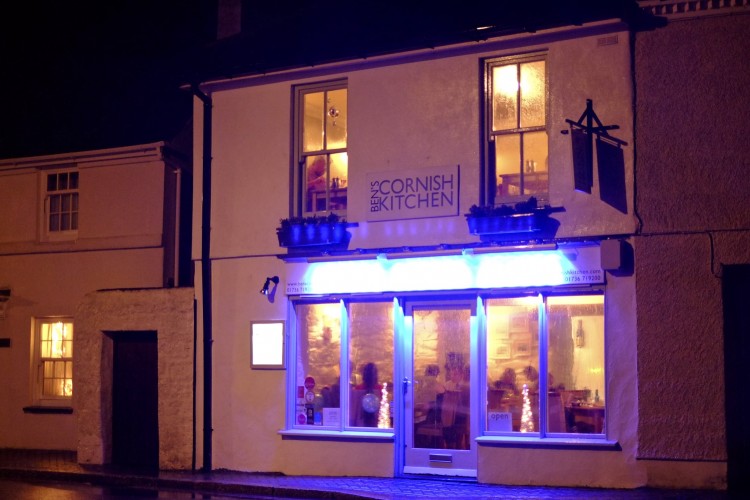 I was told a long time ago by a writer far more experienced than myself to never start any piece of creative writing with ‘It was a dark and stormy night’.  As sensible as this suggestion is (and I have heeded the advice until now) there is no other way to accurately describe the evening we travelled to Ben’s Cornish Kitchen during some of the West Country’s worst weather for a fifty years.  I would like to state that I take my work very seriously and would never cancel a review unless I absolutely had to.  I was tempted to call it off but I am really glad we decided to battle against the tempest that tried its best to prevent our journey that night.  After a hair-raising drive we made it to Marazion in South West Cornwall. I felt we had travelled to an island and we had crossed a tumultuous sea to its welcoming shore. 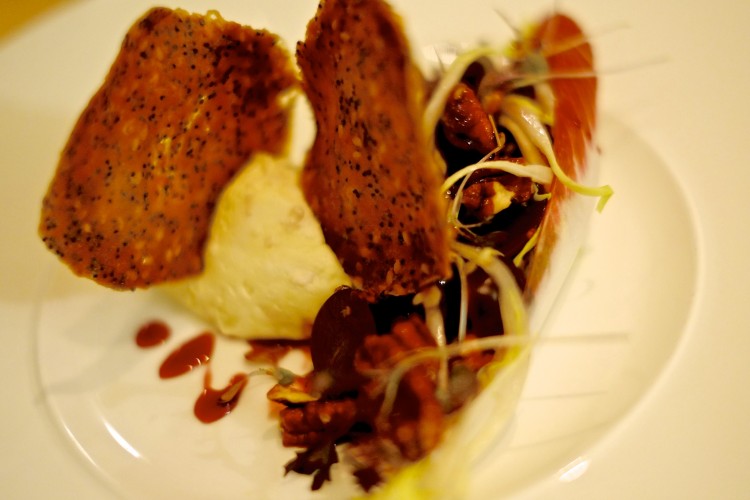 I met Ben last year while having a working lunch with fellow Cornish chef Fiona Were of Mullion Cove Hotel fame.  The food was great but I felt I had only touched the edge of Ben’s cooking.  I wanted to see and try more, so decided to revisit just after New Year.  A good time to really test a restaurant, have they run out of steam after Christmas?  Can they provide fresh well-cooked food in January?  It might sound odd to ask these questions but this part of Cornwall is fairly isolated at this time of the year, it takes stamina, perseverance and creativity to maintain standards. 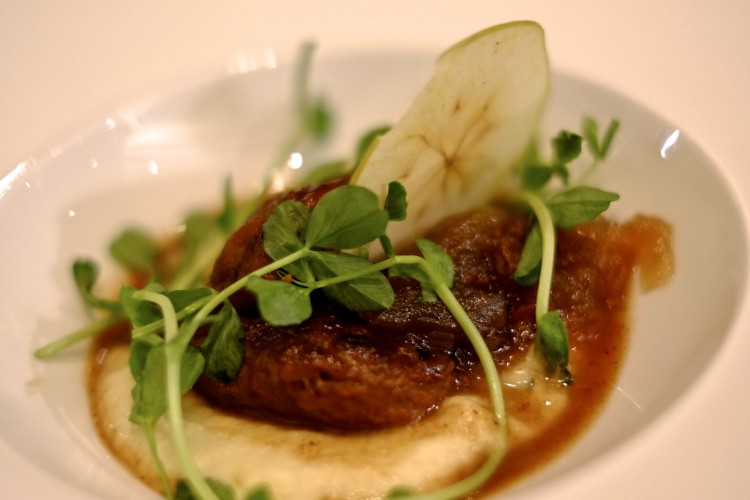 The first thing to report is that it was over half full.  On a night that most people would not go further than their wheelie bin let alone the 30 miles we drove through rain, hail, a little bit of sleet and wind speeds of over eighty miles an hour says something about the Ben’s food and his restaurant. 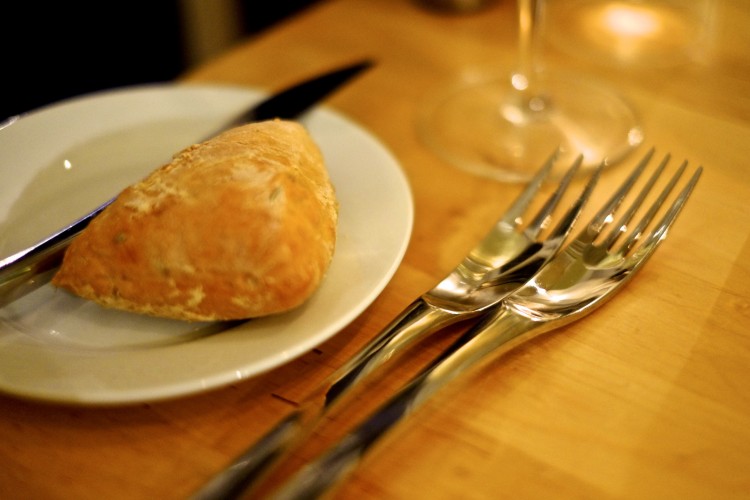 As we opened the door a calm descended on us both.  A large birthday party looked over and all smiled as if to congratulate us on getting there and then looking down at their food in front of them they smiled again.  We were shown to our table upstairs via a spiral staircase.  The second level is new and looks great.  Rush matting, simple square tables and comfortable rattan chairs all in gentle hues.  We both thought it looked very comfortable and homely which is exactly what it was, Ben’s home until he converted it last year to create more space. 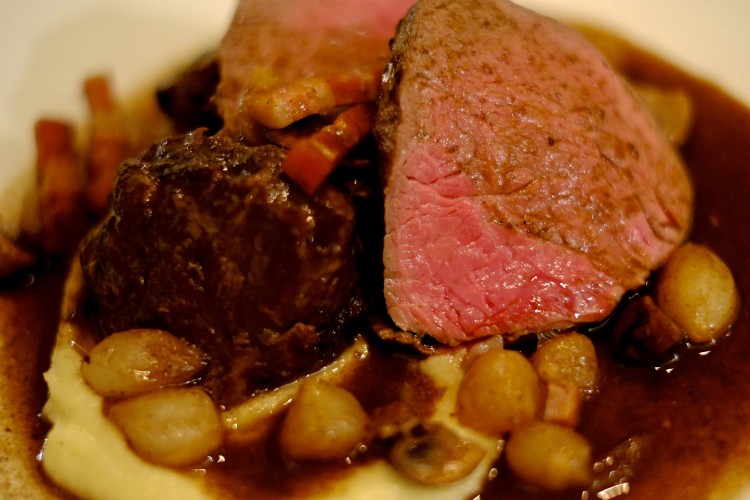 The menu is wonderfully simple, five starters, mains and desserts.  This is refreshing, it fits on one page and as if that wasn’t great enough it also has an optional suggested wine for each dish.  It recommends a reasonably priced drink for every plate.  The most expensive is £10 and the cheapest £5. 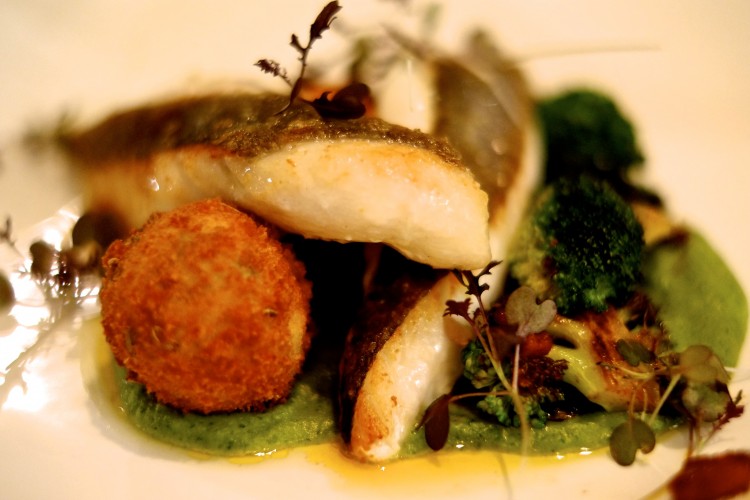 The staff are without question top notch.  Looking after us with just the right amount of attentiveness and they smiled a lot.  There was nothing on the menu I wouldn’t have eaten, which doesn’t happen very often in my job.  There is always a dish or two lurking in the shadows that you know will be frozen or worst still some disastrous car crash mash up of a dish that the chef thought would work but has never tried it themselves.

M was feeling the cold and needed warming up.  She chose very wisely and had a classic combination: slow braised cider pork cheek, celeriac, apple and golden raisin chutney with apple crisps (that were so thin you could see right through them) and pea shoots.  This was a warm, hearty and perfectly concocted plate of food, absolutely on the money in every way.  I chose really for reasons of curiosity Ragstone goats cheese mousse with pickled grapes (lovely, recommend you try them) spiced pecans, chicory, seed tuille, all with a lovely red wine reduction which I would have liked in a jug so I could have had more.  This was a complex dish of texture and sharp and bitter with sweetness playing its role. 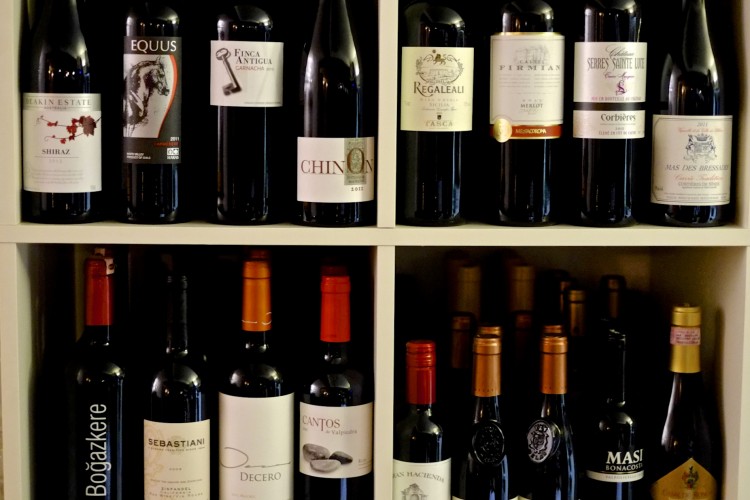 It’s worth pointing out that Ben has learnt his craft mainly by watching other people cook.  He spent a few years as a bar manager then worked in a couple of restaurants travelled a bit then moved to Cornwall.  A few years cooking in various kitchens and then following in his grandfather’s footsteps (he had a hotel in a neighbouring village) he set up his own place.  A lot of the flavours he creates come from the wines they sell.  The wine list is good here but I was so impressed with the recommended choices for each dish I went with those and was not disappointed.  Most of the food here is classical in technique which is all to Ben’s credit as he has no formal training. 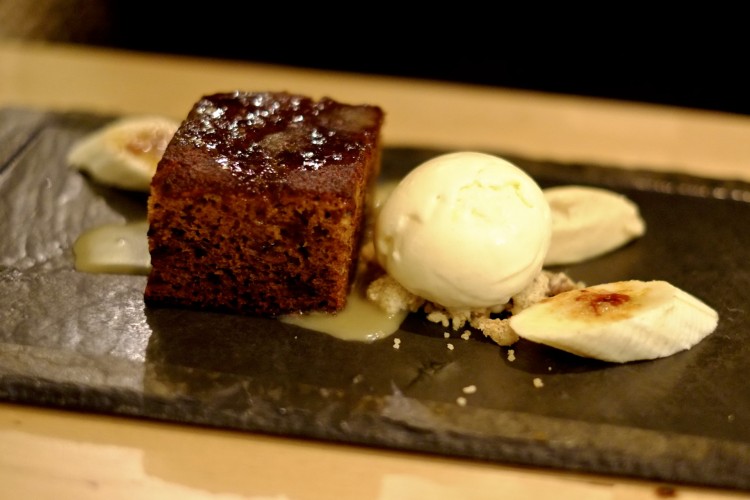 My main had winter written all over it.  Roast fillet of beef, ox cheek, celeriac mash, sprouting broccoli and a rich sauce of pancetta and caper butter.  This was the best of both worlds, a rich densely flavoured ox cheek that felt like it had been cooking for days such was its tenderness and a prime piece of fillet cooked medium rare sitting on top.  A tasty, seasonal dish that was full of character.  This is something that Ben (and his brother who also works in the kitchen) has a good eye for.  The food is so eloquently presented but is trumped by flavour.  You can’t get better than that in my view.  M’s pan-fried John Dory with a smoked fish bonbon; chorizo, roasted broccoli and roasted garlic custard had a delicacy and perfect texture to the fish.  It was full of balance, not too much chorizo and the smokey bonbons were crunchy and bursting with the controlled kick of strong fish.

Having completely forgotten about our treacherous journey and only the odd reminder in the form of a creaky swinging sign outside (it sounded like one of the spaghetti westerns when the whole town is waiting for the gunmen to ride in) we turned to desserts.  M was still feeling the weather was a personal attack on her Christmas holidays so needed (she said)! A warm sticky toffee pudding, clotted cream (which was the excellent Rodda’s – zero food miles there) that came with butterscotch sauce and caramelized banana.  This put a huge grin on her face.  The sponge was exemplary and the bananas the ‘icing’ on the sponge.  It was light and fluffy while not disappointing on the taste front, another balanced hit.  M absolutely loved it! 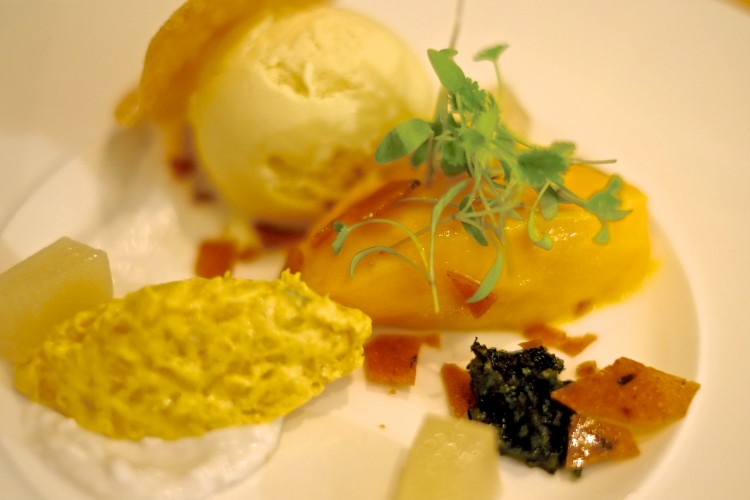 Ben had mentioned to me that he had tried to move the dessert I had chosen off the menu several times but was greeted with cries of derision from his regulars such is their loyalty to it.  It’s called sweet curry plate this does not really do it justice.  You get an assortment of goodies consisting of mango curd, spicy rice, coconut puree, spiced caramel, ginger jelly, cardamon ice cream (subtle and sublime) coriander and a poppadom.  Now this might sounds like one of those mash ups I mentioned earlier, it is not.  This is a very clever dessert that plays with your preconceptions of what dessert should be.  It is sweet in part but also spicy, you only get a little of everything so nothing overpowers.  The best part for me was the coriander, which had sugar infused in it.  Something I had never tried before but simply gorgeous. 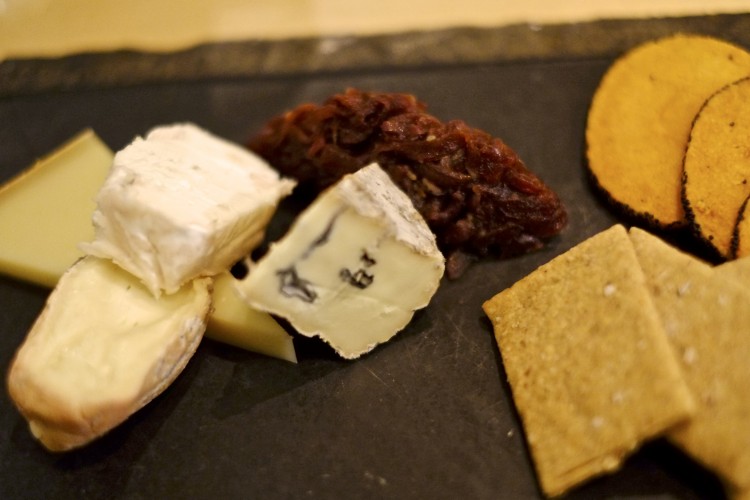 I ordered some cheese because I could believe they wouldn’t do a grand job of that as well (and I just wanted to carry on the experience of being there a bit longer).  The board did not disappoint; Helford White, Helford Blue, Ragstone, Comte served with homemade biscuits.  The biscuits were made with parmesan and had been rolled in black pepper then sliced very thinly, a brilliant way to bring a bit of cutting heat to the plate.  I loved them in fact I didn’t have a bad mouthful at Ben’s Cornish Kitchen all evening. 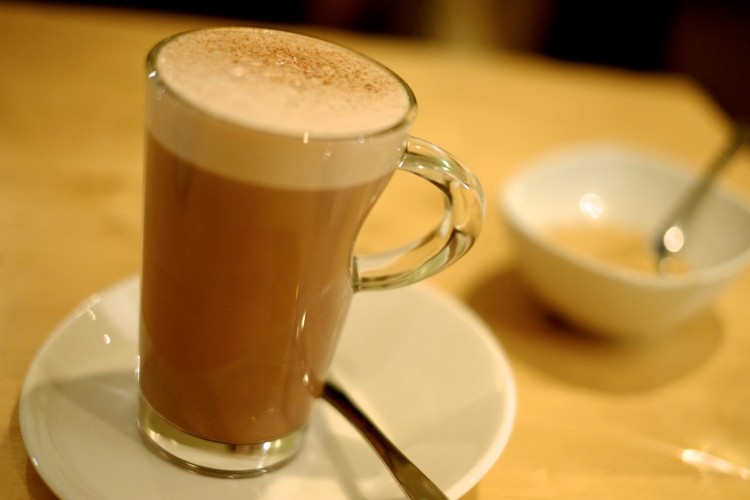 Ben, like Shakespeare’s Prospero is a talented magician conjuring ingredients into plates that sparkle.  This is a restaurant to find, book a table at and then congratulate yourself on your wise decision, it’s that good.

As the meteorological conditions failed to prevent our journey home I was reminded of a quote from The Tempest “Hell is empty and all the devils are here”.  The weather should have stopped us but it didn’t.  Was this a portent to allow me to write about this marvelous little restaurant where Ben rules over his ‘island’ as Prospero? I’d like to think so.