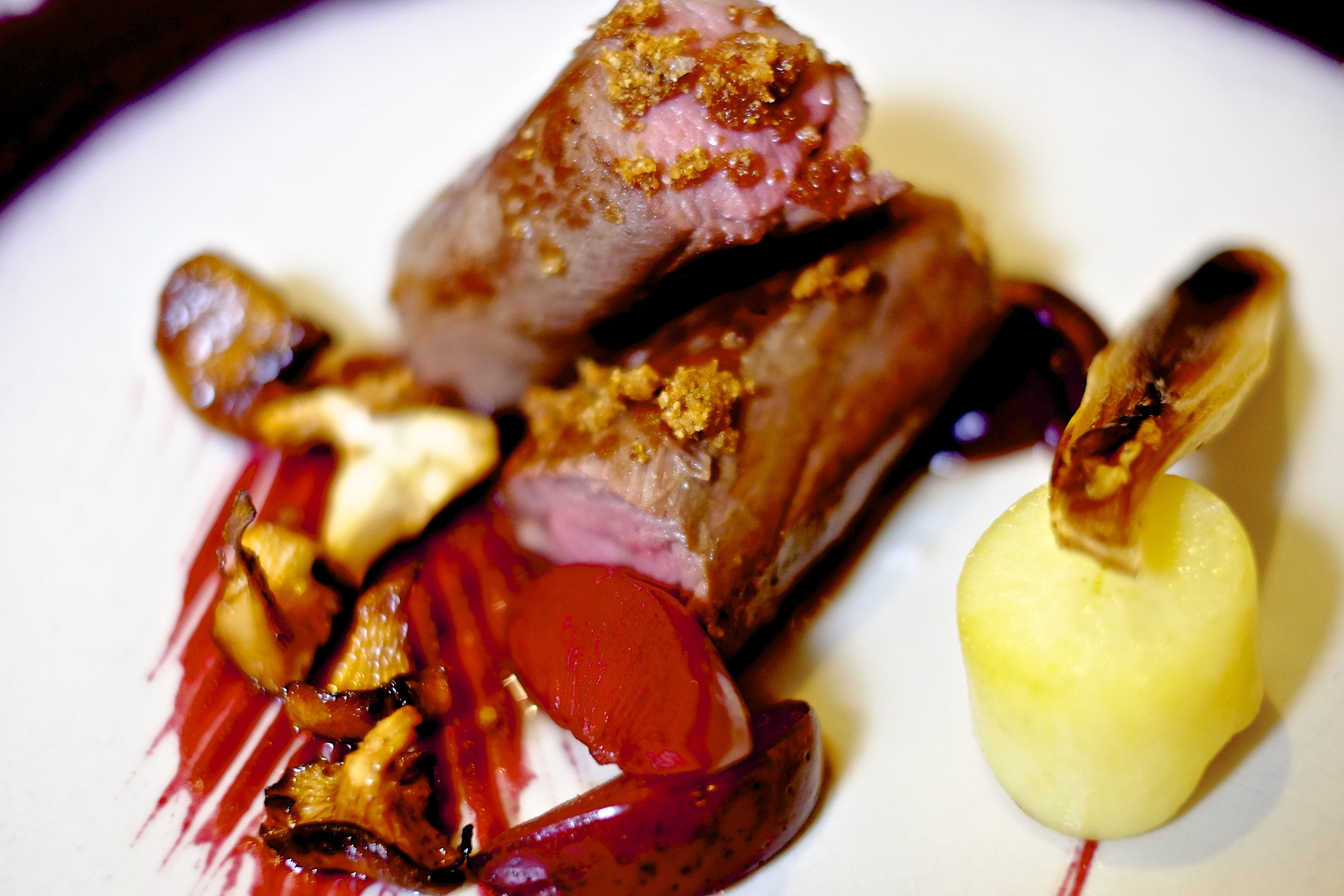 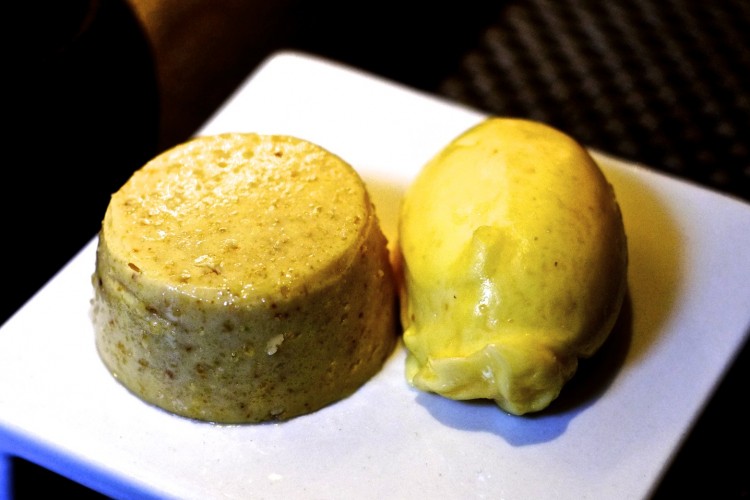 The Caxton Grill has lured me back again.  Partly because I have never had a bad meal there and mostly because it’s one of the hottest tables in town right now, Head Chef Adam Handling is, as I write riding high in TV’s most testing food challenges; the BBC’s Professional Master Chef.  What’s more this prodigious culinary auteur is only 24 years old. 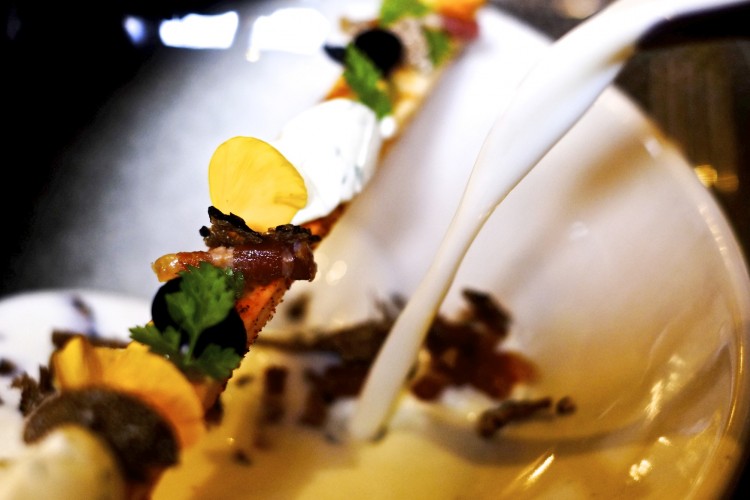 My companion for lunch and fellow foodie is sometimes known as A Lady in London, an Anglophile from California firmly ensconced in our capital, and I know her as J.  J has had afternoon tea at St. Ermin’s Hotel before which is served on the beautiful confection of a balcony above the hotel reception, The Caxton Grill brings fine dinning to the hotel by cunningly having two entrances, one through the hotel as you’d expect for guests and an independent one the corner of Caxton Street.  I’ve written before about St. Ermin’s Hotel’s history with spies and espionage so it only seems fitting that there is always an escape option if you need it. 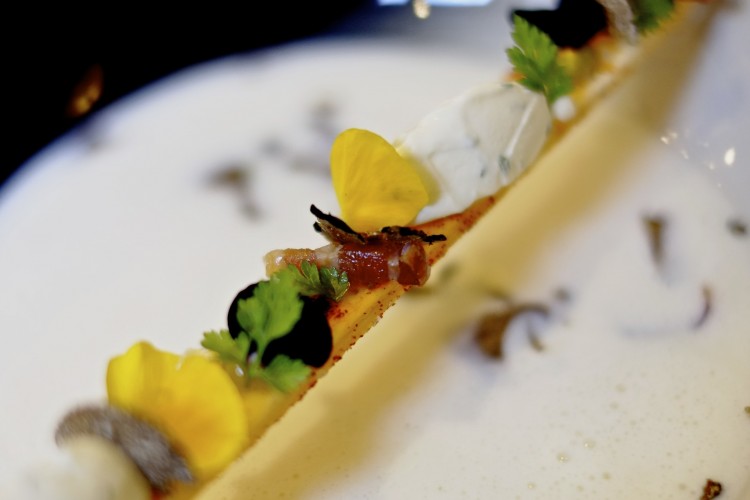 We started to catch up, this always takes time with J as she is the most travelled person I know (visiting over 100 countries), her next venture was to go horse riding somewhere in the Cotswold’s.  Which is rather tame compared to where she has been recently. 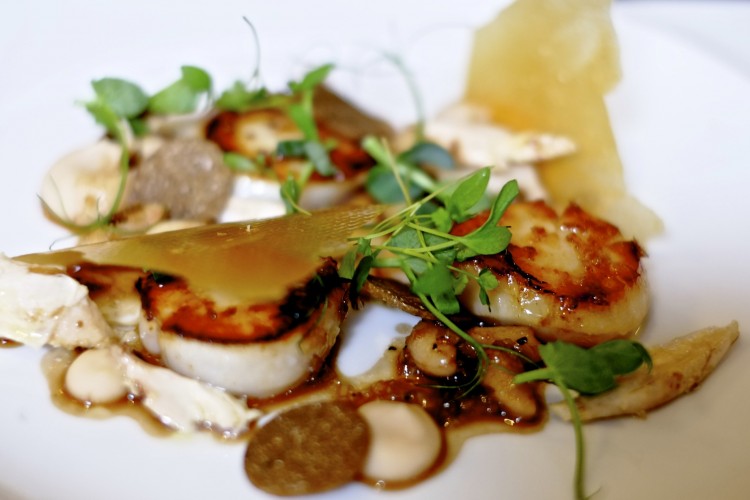 We were served some good in house bread and two unusual butters, pancetta and a chicken, both tasting subtly eponymous.  Clever chap Adam, it’s a moot point when to hold back on big flavours he did it here and it was the right thing to do, the bread was all about texture but the butter, well that was just the icing. 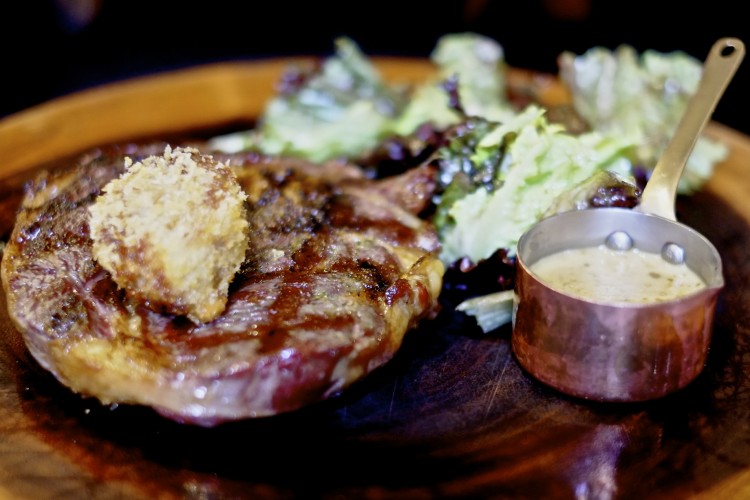 J opted for Orkney hand dived scallops, she is planning a return trip to California for Christmas and I don’t think they have the same quality out there so she felt the need to get her quota in before her journey home.  A prettier plate of food and sweeter scallops would be hard to find.  It was just perfect really, the look, the taste, the feeling of ‘I wish I’d ordered that’.  But then I received mine, Truffle Jerusalem artichoke veloute, which was poured in front of me.  I smiled as I watched the summer truffle slices dance around the bowl as the hot veloute enveloped them.  This was another outstanding effort from the kitchen.  The little bridge of pastry crossing the bowl with pancetta and micro herbs with a flower garnish was just as pretty as J’s.  It tasted silky smooth as well. 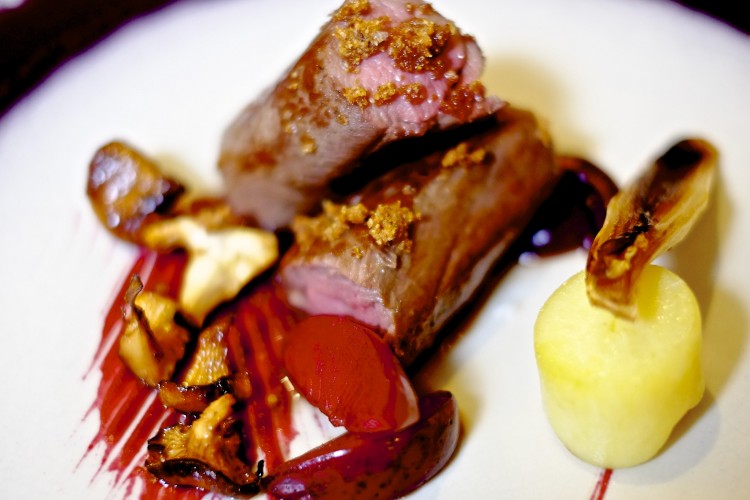 J’s travels had recently taken her to four countries in Africa where she took safaris, a tiny aircraft (that she was scared stiff of), fine dining and wine tasting in South Africa.  The weather in London is quite cold today which made her exploits even more glamorous.  We talked of the various things they eat in Africa and the nearest exotic food could come up with on the menu was Muntjac venison which I had ordered as my main.  Although from South Asia the muntjac or barking deer was introduced to this country nearly a hundred years ago.  Our now indigenous population sprung from escapees from Woburn Abbey in 1925.  They are now a prolific part of our countryside populating nearly every county in the UK. 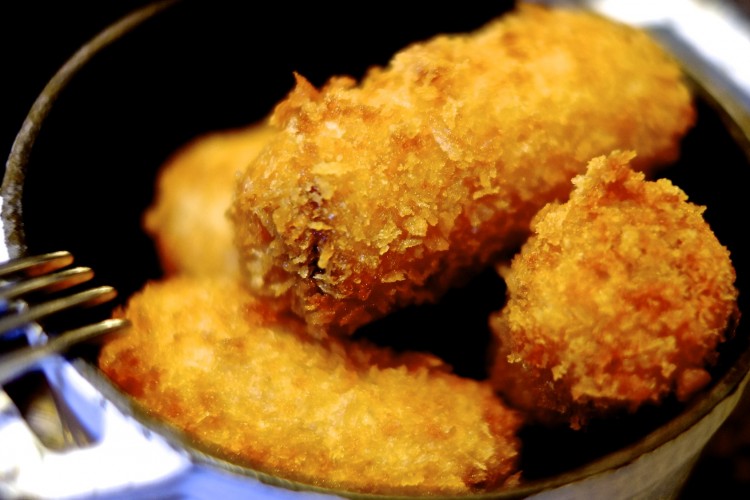 J had ordered from the Caxton’s Josper Grill a kind of high temperature indoors BBQ that seals meat quickly keeping in all the flavour.  My venison was outstanding, it was served with plumbs, potato and chard.  The meat was soft and rich while pink and again a pretty plate of food.  J’s vintage 35-day rib eye had wonderful flavour but was a touch on the fatty side.  Not a problem for many as that’s where the taste is.  Our sides were of a high caliber, the chorizo croquettes were crunchy and almost brittle with a burst of taste inside and a smoked mash.  The mash was in another league of tastes, a clean pure smoke that didn’t overpower.  Adam again has got the subtleties just right.

I tried but failed to impress J with my meager travels to Texas, Ireland, France and Italy this year.  She showed interest but I knew I couldn’t compete, then, I mentioned my trip on the Penzance Night Riviera Sleeper and held her attention – finally something she hadn’t done!  It is a great trip that I can recommend. 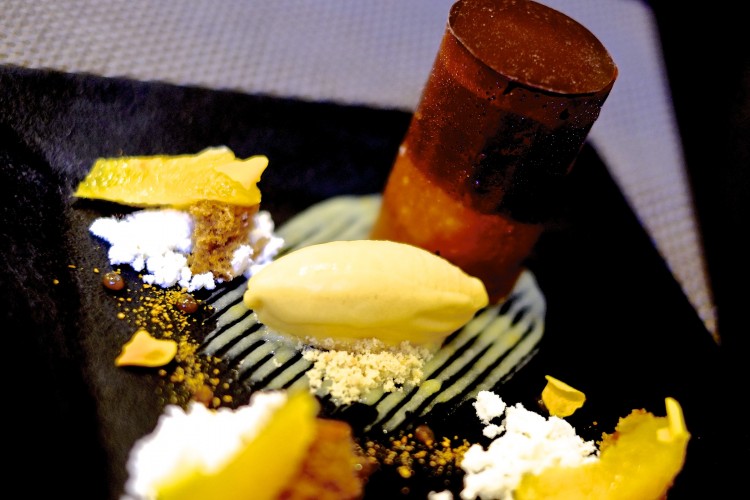 My third course was to be cheese.  The selection was a generous five pieces but I was little disappointed that there wasn’t a good solid blue on my board although the choices in other ways were quite unusual; Kilree, Nuns of Caen and Bluemin White among the samples.  J lucked out again with a triumph of gingerbread with warm chocolate mousse and orange ice cream.  That girl just picks well.  It was gorgeous, all its components individually and as a unity working well.  Another clever trick pulled off by Adam and his team.  He is man to watch, I have no doubt that Mr. Michelin and his bag of stars will come knocking on his door soon. 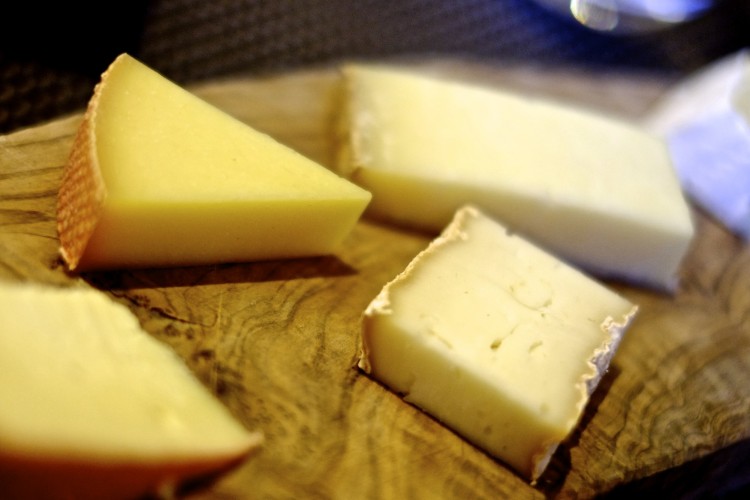 So my attempts at bragging and J’s dignified stance (she even offered at one stage to not mention any countries at all if it bothered me)!  Of course it didn’t worry me at all as I knew that that is her job and sis one of the most modest people I know and more to the point she had a riding lesson scheduled in a couple of days and had let slip that she hadn’t been on a horse for about ten years, her greatest fear was falling off.  Sometimes it really is better just playing it safe and stick to Shank’s pony however unimpressive that might be.