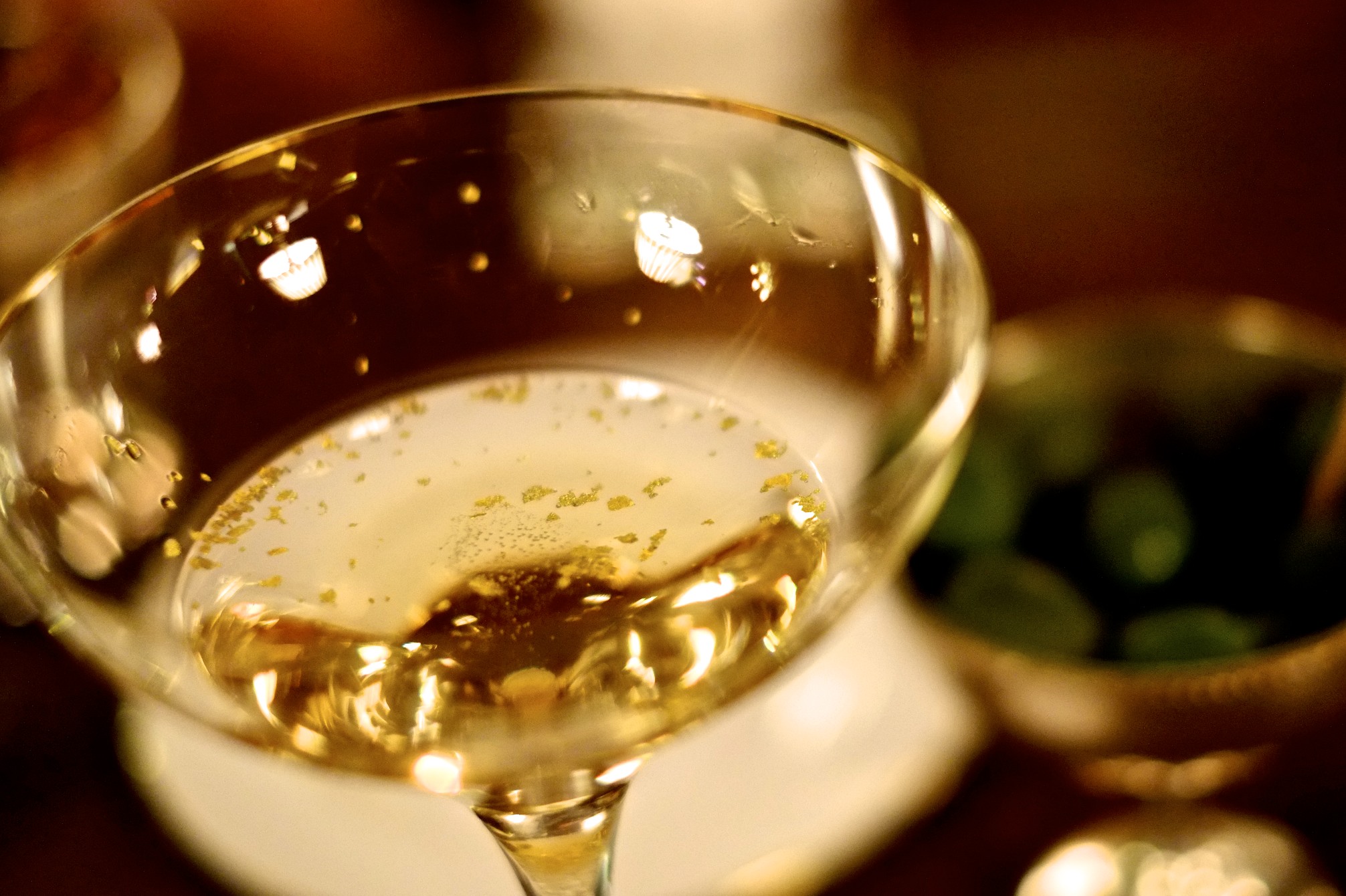 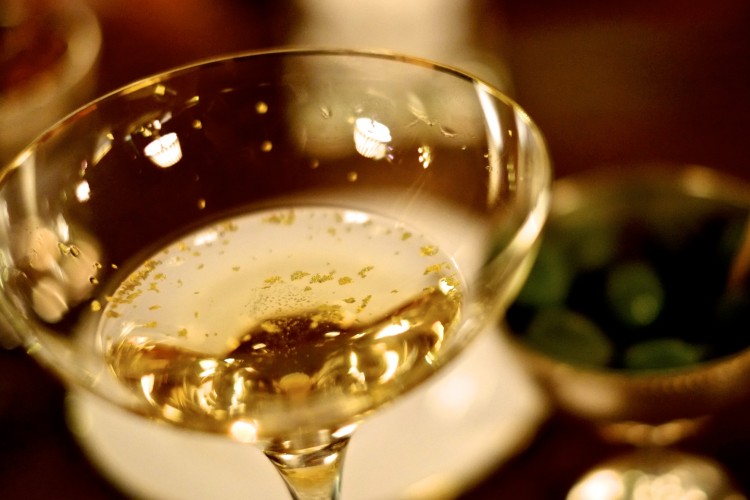 Most famously home to the Astor family Cliveden has its own special place in British history.  The Profumo Scandal that rocked the government in the early sixties started here.  Talk of wild parties and a cottage let by a certain Stephen Ward, osteopath to the rich and powerful ultimately led to the downfall of a government and maybe even the end of an epoch of glamour and privilege. 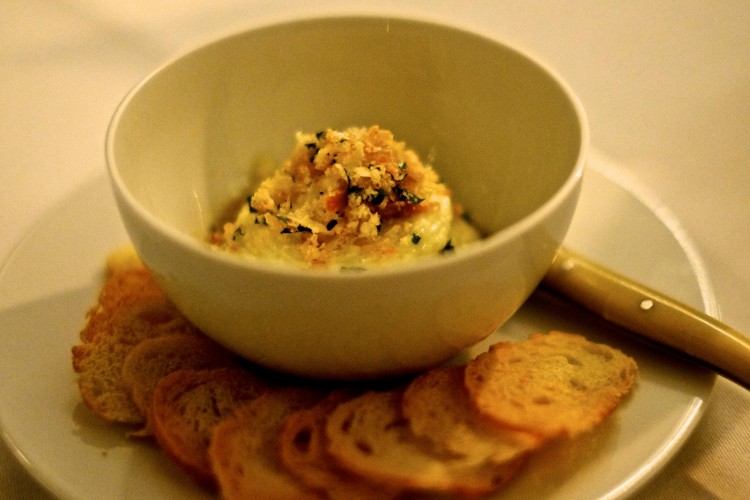 Cliveden is now run as a 37- room hotel, sitting in 376 acres of National Trust land.  The grade one listed building is Italianate Palladian in design, sitting high above the River Thames it commands a spectacular view across Berkshire and Buckinghamshire.  It is a splendid building that is so large it’s hard to imagine it was once a private house. 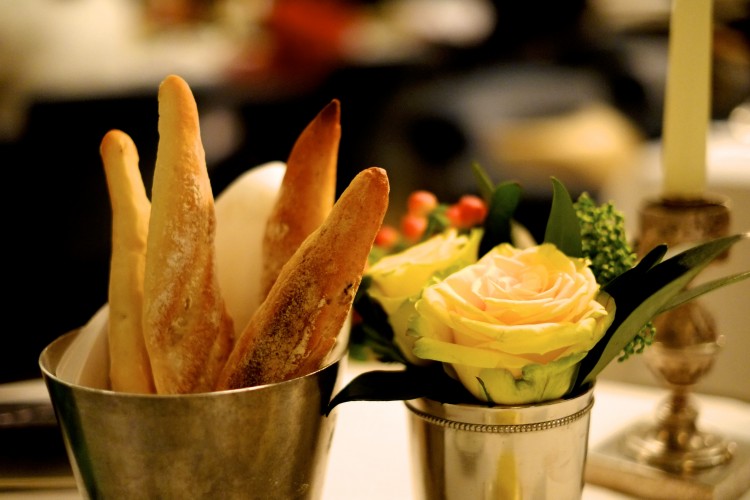 The reason for my visit is to sample the food of the much lauded new chef André Garrett.  Earning his spurs in a number of impressive ways through a Roux Scholarship and a Michelin star at The Orrery then onto Galvin at Windows.  He has recently joined Cliveden to weave his magic into the kitchens there. 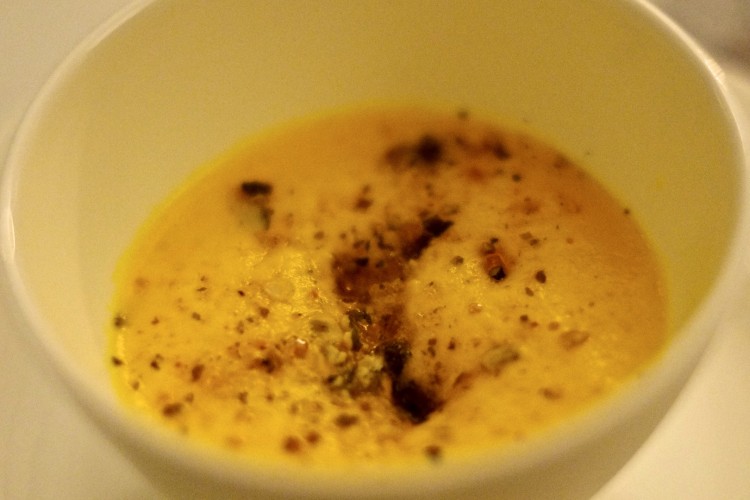 Before our dinner M and I sat in what must be one of the grandest halls I have ever encountered.  There is a giant French fireplace at one end and ancient tapestries hanging in the walls.  An impressive staircase with wooden carvings of previous owners on the newel posts at the other it stretches the length of a small football pitch.  The space is peppered with cosy couches and sofas where guests were chatting about their day.  The house cocktail has 24-carrot gold leaf as one of its ingredients.  Trying it out it immediately took me to another place, looking up at the Italianate carved wooden ceiling I could almost hear the chatter of past times; Charlie Chaplin, George Bernard Shaw and Winston Churchill were all regular guests at private parties here. 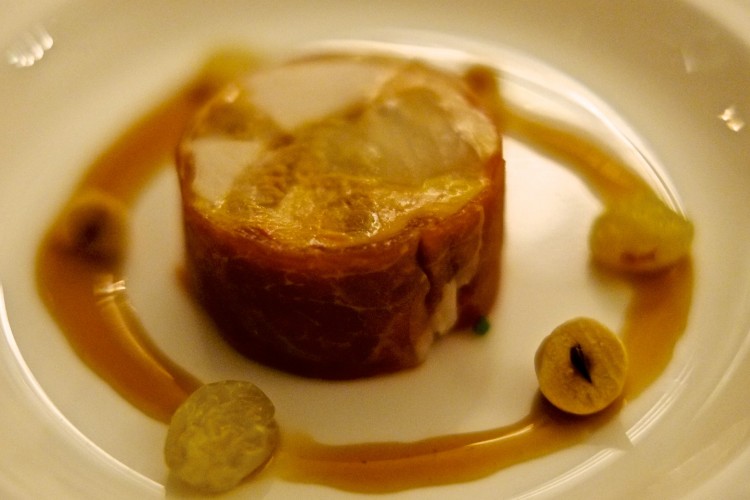 We sat at a window table in the newly refurbished dining room.  Once the main drawing room of the house, this is also on a giant scale but with clever seating it seems intimate.  The menu looked so good I was delighted to discover they had a tasting menu, which would avoid the agony of decision and ensure we would get the best from the chef. 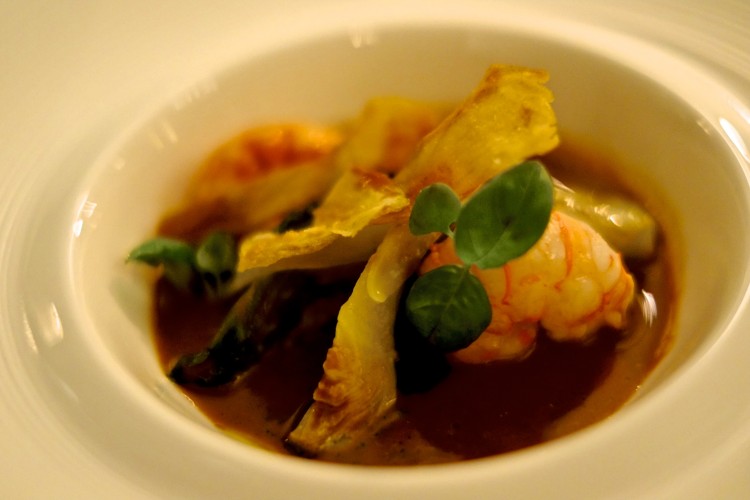 First of all before this eight-course menu started for real we were given a delightful amuse bouche, made of pumpkin and something sweet, it was a success.  The rest that followed was to say the least spectacular.  Every dish a picture and tasted fantastic.  The hand dived Orkney scallops were as sweet as could be and had that rarest of luxury, English Caviar.  The wine pairings suggested were spot on.  If one didn’t like the choices though there is an enormous cellar full of goodies to choose from.  With perfectly acceptable prices to lottery win level of quality it took me some time to read through. 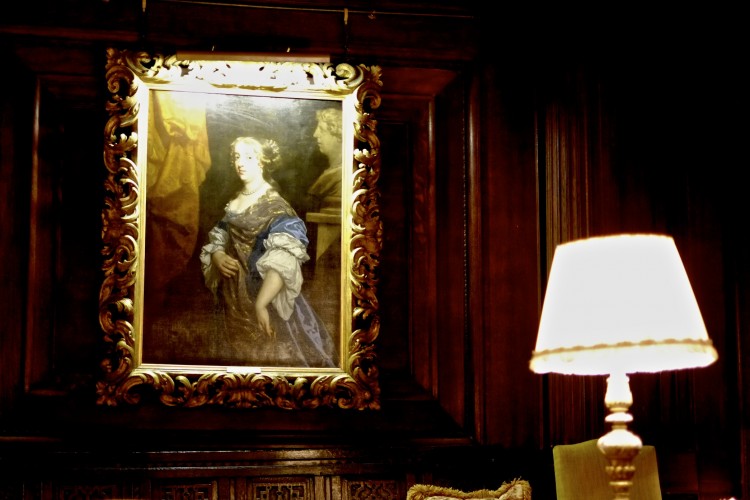 When you arrive at Cliveden the fun begins outside the grounds.  The electronic gate that our satnav directed us to looked ominous.  I wondered if we had arrived at the wrong place.  One press of the intercom and the gates opened majestically.  This simple piece of security enhances your arrival, as we drove up towards the house I saw two men with umbrellas (yes, it was raining again)!  They directed me to park outside the main porch.  As the car stopped both doors were simultaneously opened for us, we were greeted by name and then escorted to the house.  Assuring us that they would park the car and look after it (it might be worth giving your car a once over before you pass it on to their care) we had no idea this was part of our evening and certainly would have removed the considerable collection of Lego on the back seat our youngest had left behind. 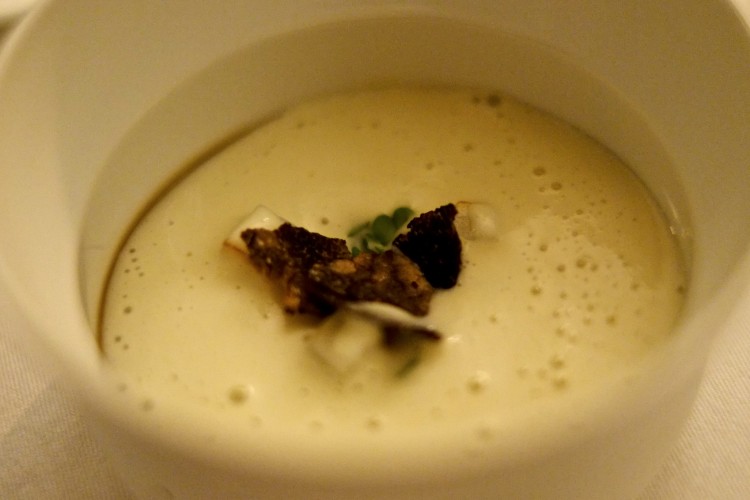 The Cliveden experience is all about them taking care of everything for you.  Nothing is too much trouble here.  A ballotine of foie gras and Cotswold white chicken was presented with ham, golden raisins and hazelnuts.  This was a thing of beauty visually as well as in taste.  The Vin de Constance South Africa 2008 was a sound match.  The head sommelier explains each choice and how it will work with the food.  This is not only interesting but heightens the expectation of both food and wine. 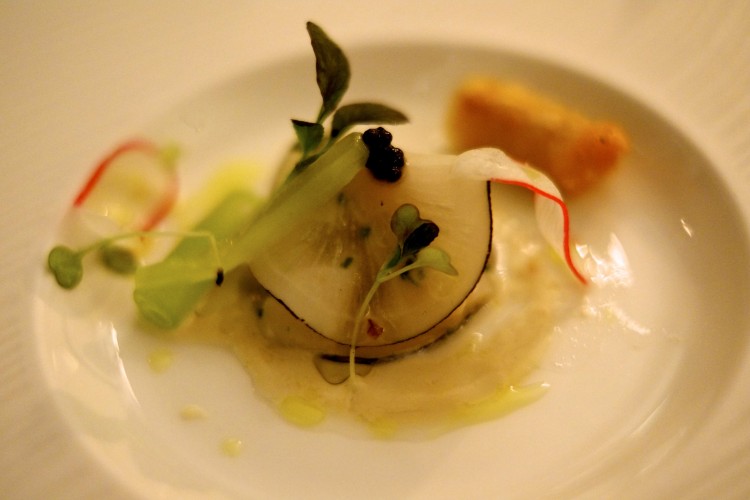 The roast game consommé turned out to be a set jelly that had Jerusalem artichoke cream pored over it at the table.  This was creamy and lush with the jelly providing a deep flavour.  The next dish was Scottish langoustine thermidor with a grilled baby gem lettuce and basil.  It is hard to describe the brilliance of this sauce; it took over my mouth and just sang for a few minutes, a mild heat that kept on giving.  I always think that a clever thought through meal like this has only succeeded when after every plate you wish you had had more of it only for it to be topped by the next one.  André is a chef who knows how to use his ingredients intelligently. 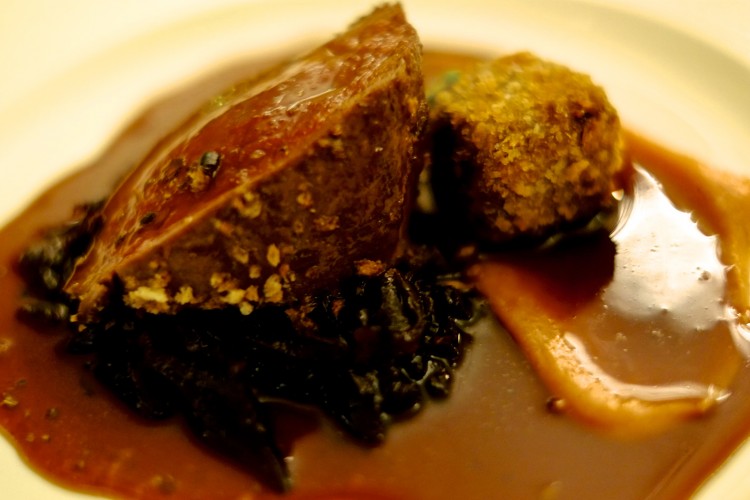 The vast gardens offer an escape from the humdrum of normal life.  You could of course just wander about the hundreds of acres at will or maybe follow the River Thames that meanders through the grounds.  The National Trust takes care of the gardens and all the buildings in them.  The Chinese water gardens are enchanting and as well as all the topiary and formal laid out lawns you can also find an amphitheatre where the first recital of “Rule Britannia” was played.  You can’t get more quintessentially British than that. 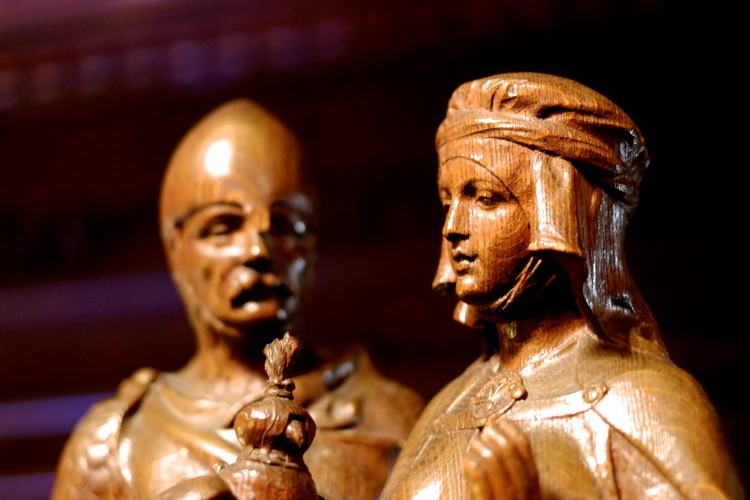 And British was next on the menu, saddle of West Country lamb venison to be precise.  Served with a croquette of braised shoulder, quince and red cabbage.  This was superb venison with a deep flavour and texture that melted away, one of my favourite dishes of the evening.  The wine chosen for the meat was Châteauneuf du Pape, la Crau Domaine du Vieux 2003.  I was warned about this wine, ostensibly the power of it.  It worked extremely well with the venison, bringing out new dimensions on my palate but it was so strong and robust it was almost impossible to drink on its own, a definite case of superior wine knowledge in action.  A perfect match. 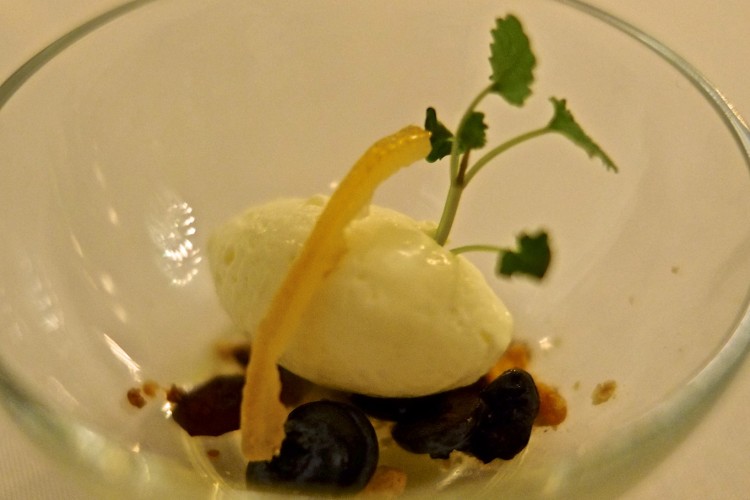 Next came cheese after a respectable gap.  This is where the only slip of the evening came and it’s down to preference really.  We were given a selection of cheeses but no biscuits, chutney or relish.  Now this might seem picky but I adore biscuits with my cheese and if there’s a relish as well then I’m an even happier man. 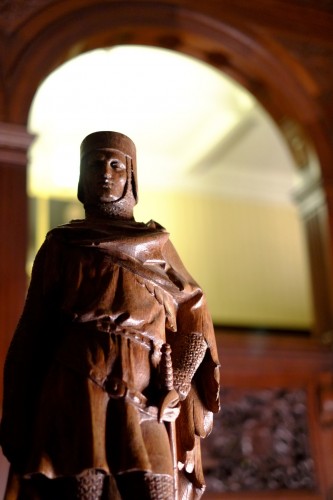 The last drop of my port gone and along comes a slow-cooked Cox’s apple with rosemary caramel, raisin purée and beurre noisette crumb, another outstanding plate of perfect food.  The coffee and chocolates seem a minor addition at the end of this feast but these also deserve a mention in dispatches.  You get to choose from a trolley of handmade delights including macaroons – one of my favourites.  M chose honeycomb one of her favourites.  We were certainly being spoilt.  In truth I didn’t want this evening to end.  Having such a carefully composed meal that lasted a good two hours is my idea of heaven. 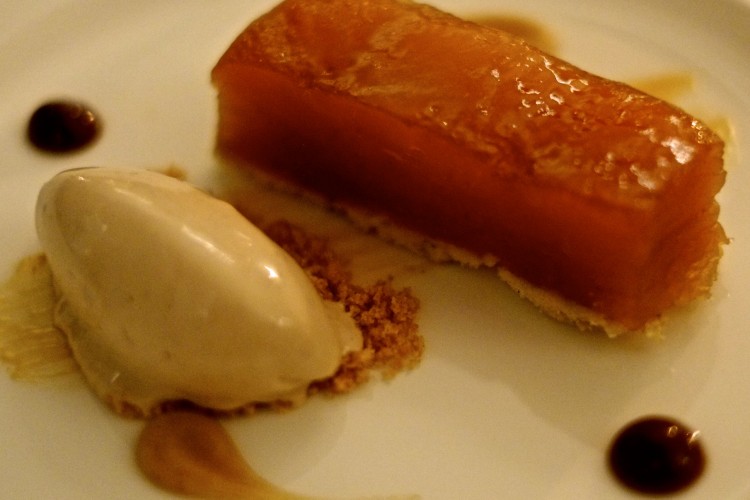 Maybe the link to Cliveden and politics has always been present.  Renowned Victorian architect Charles Barry, who designed the Houses of Parliament designed Cliveden in 1851.  It impossible not to be impressed by Cliveden, like a graceful Duchess she stands proud with the glorious backdrop of her garden augmenting her beauty and grace.  Manicured to within an inch of its life like the food it looks great from every angle. 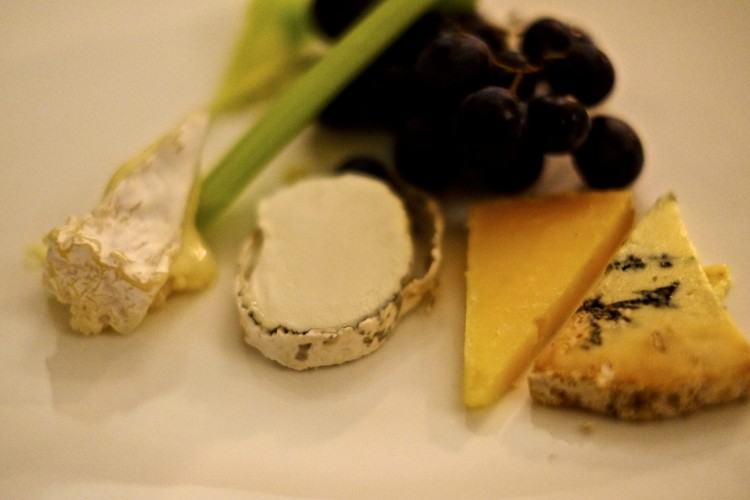 We did have to leave eventually, our coats were fetched and as we walked through the porch to the outside our car was waiting with the engine running and the doors open.  We hopped in and as we drove away I glanced back at Cliveden and then the back seat.  Those wonderful hosts hadn’t made anything out of the Lego.  Of course they wouldn’t but in a funny sort of way I wish they had it would have made it impossibly perfect.  I discovered later that the hotel has a motto (how many hotels have a motto)?  “Nothing ordinary ever happened here, nor could it” quite true and worth visiting to furnish your own memory with the simple luxury that is Cliveden. 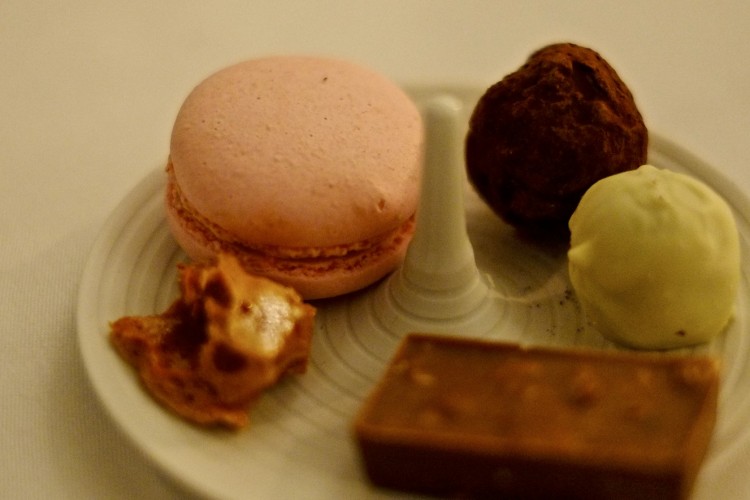 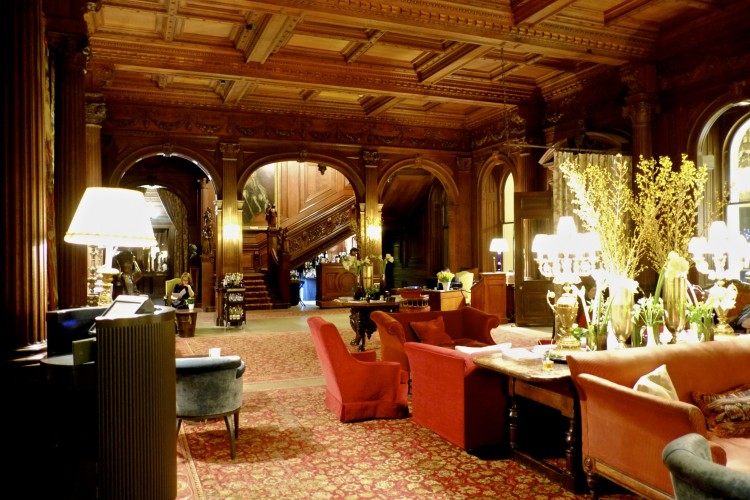 To read more of my reviews of discuss commissions go to 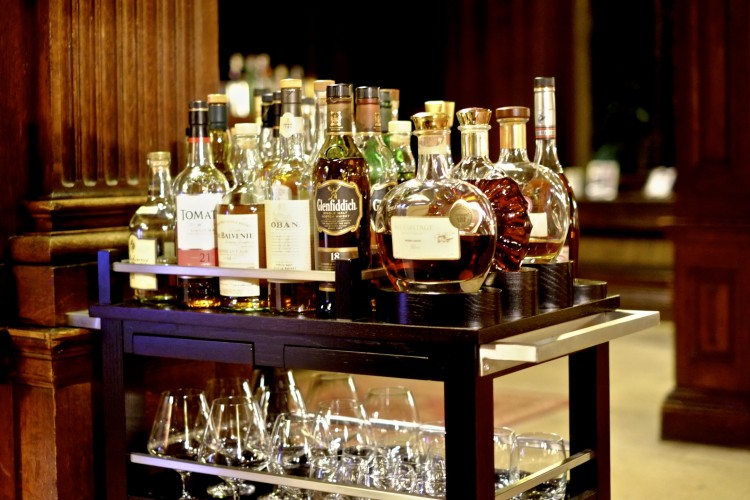