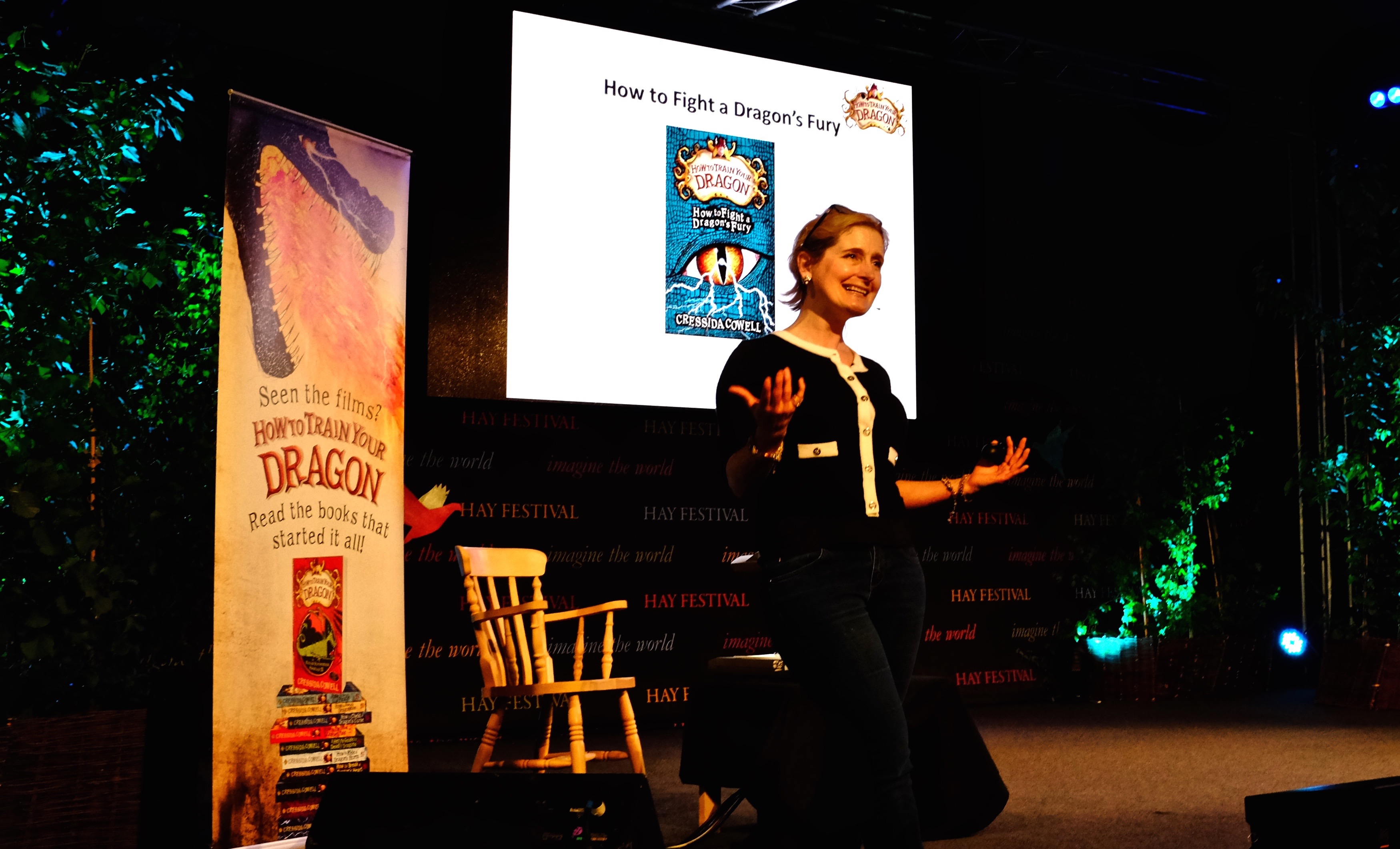 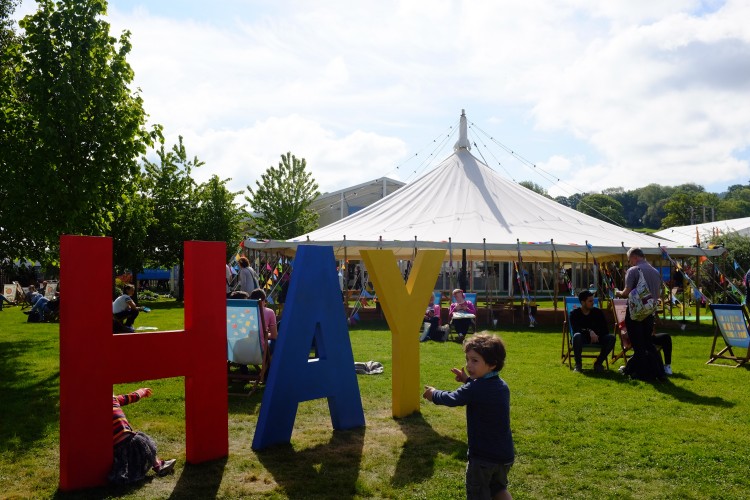 The Hay-on-Wye festival is something of an institution although it has not been around for very long, only 37 years. I felt it was time to check out what Bill Clinton called a Woodstock for the mind for myself. I planned to hear a few authors and check out some of the other fringe activities, I had also been invited to a private viewing of a local artist’s work displayed in her garden no less. 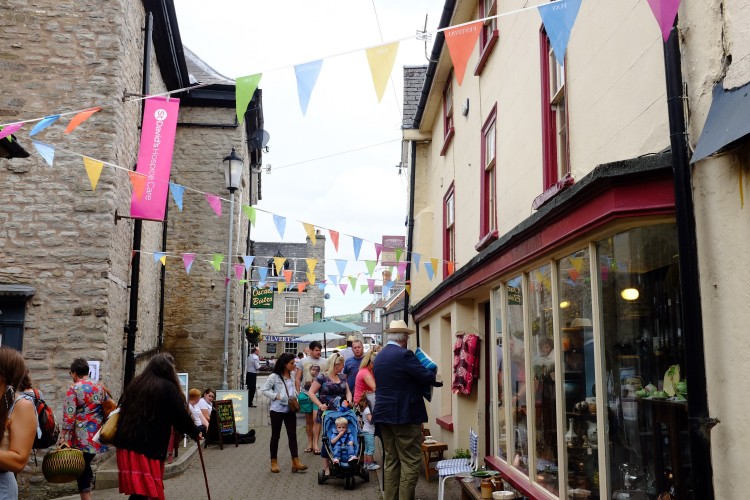 In a borrowed VW camper van (thank you brother-in-law D for the loan) I set off from London to Wales. I drove on a Saturday so hit a bit of traffic in all the usual places but the drive was pleasant enough sitting high in the van ate up the tarmac like a aniseed addicted child devours liquorice. 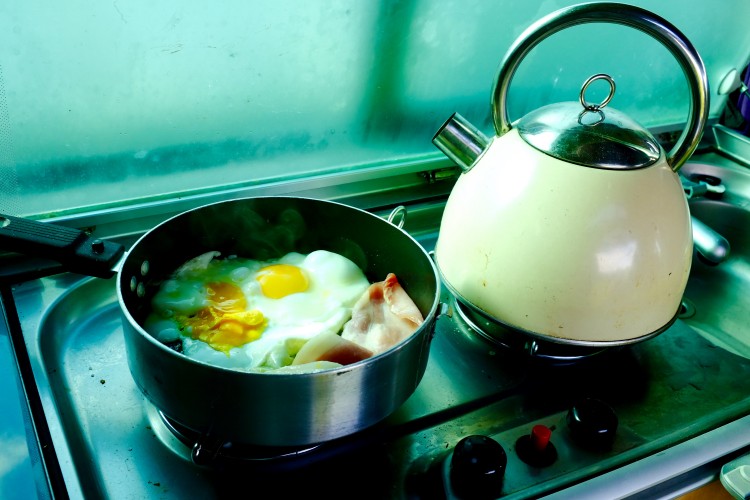 My campsite was just five minutes stroll from the festival site. Located on Gypsy Castle Lane I found level ground, superb showers and toilets that had a constant supply loo paper. Almost luxury. Any self-respecting camper van owner does one thing when establishing a base they make a cup of tea. D’s VW California has all the mod cons including a fridge and a two-ringed hob. Once holding my tea I surveyed my corner of Wales and enjoyed the fine weather of the late spring evening. 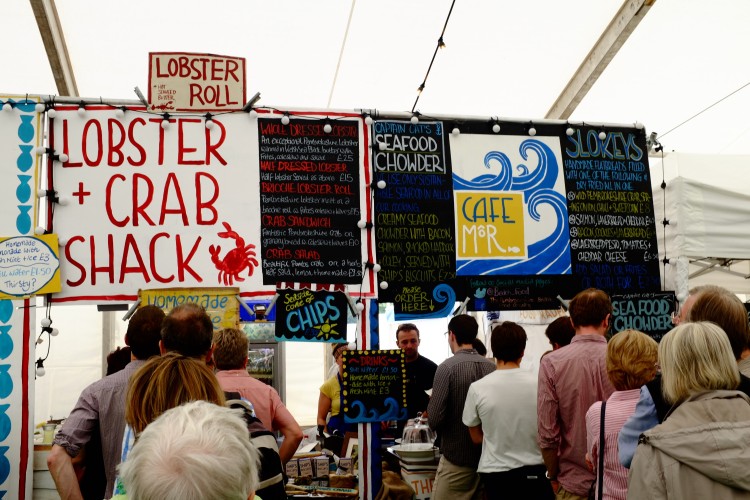 The price for all this luxury was an incredible £12 per night. As you might guess I’m not used to camping, it certainly has its benefits. After a splendid supper of two types of cheese (Welsh of course) and a couple of glasses of Chilean Merlot I made the bed and had an extremely comfortable night’s sleep. Years of travel staying in hotels don’t prepare you for the one thing those campers know all too well about. The dawn visit to the loo! You have to wear something and put footwear on (it’s surprising how moist the ground can get even in hot weather). 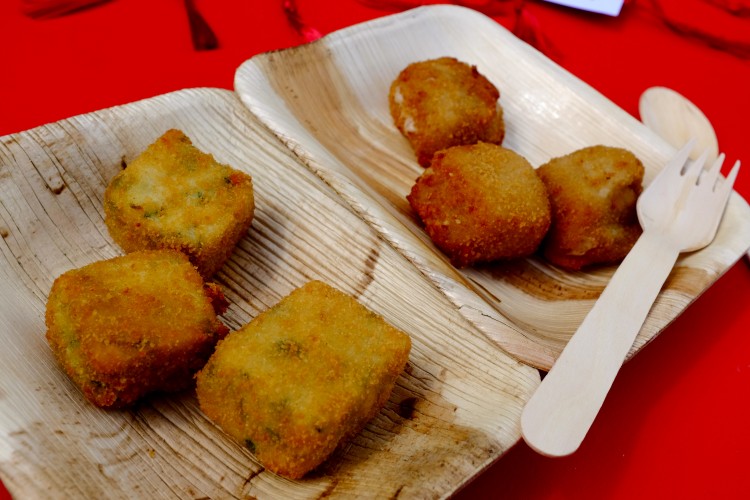 My breakfast of bacon and eggs with tea was totally scrumptious, probably down to the brilliant sunny weather and a certain amount of pride in managing to get it all cooking in my new ‘smaller’ surroundings. The thing about camper vans is you have to think one step ahead. If you need something from a cupboard under the foldout table you have to take everything off the table to reach it. Organisation is the key. One soon learns! 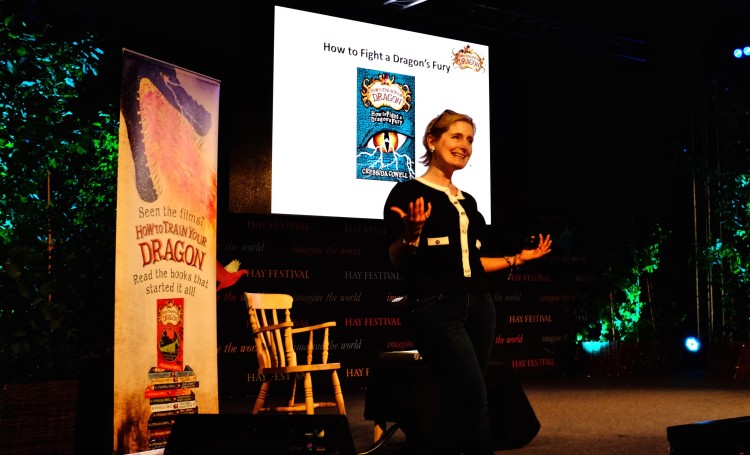 My first impression of the festival was that the site was very small, I was expecting something much larger. The size does add an intimacy that is appealing though. I went to see Cressida Cowell the author of the How to Train Your Dragon books. She’s about to publish her twelfth so had a large and enthusiastic following. The tent was packed with families all desperate to glean any information about the book and insights into her writing influences. Cressida is a hugely entertaining speaker, talking to the children as much as the adults. She was adored by the Hay audience who loved her recitals of the dragon language (which is very funny and has a way of using slightly naughty words to good effect). 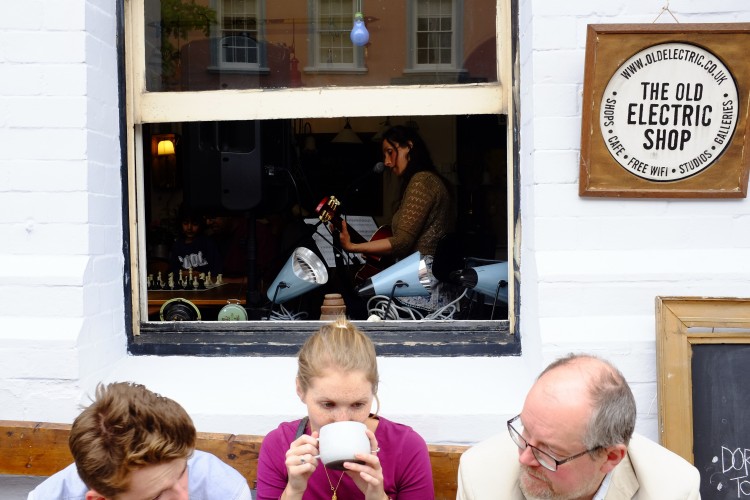 Her mission she told us was to get boys reading after growing up with a brother who wouldn’t read at all as a child. In the process of her writing the dragon books that brother has grown up to be philosophy professor – maybe Cressida had an influence that knows. Their childhood was full of adventure holidays on a remote Scottish island where they had basic provisions and lived by their wits. A kind of ‘Swallows and Amazons’ existence but further north. Discoveries of giant prawns and conger eels fuelled her imagination. 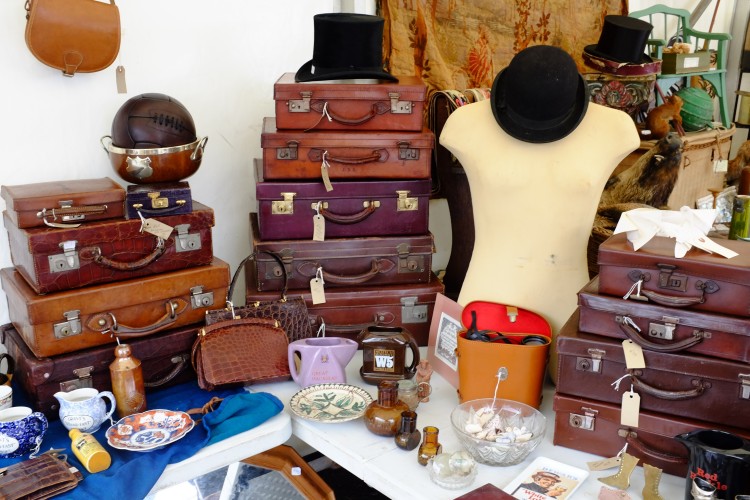 She has an enthusiastic way of encouraging children to read and relate to their own imagination. Unleashing true heroic qualities in her characters. Reading from her latest book How to Fight a Dragon’s Fury, I looked around and the audience was in almost painful attention. You could have heard a pin drop except that you couldn’t as we were in a field!

The stories are loosely based on the Norse invasions with clever little fact included such as the Vikings may have invented skiing. What an interesting idea! Drawing on her own childhood favourites like Peter Pan and Wendy, Treasure Island and Ronald Searle’s St. Trinians she has created a charming and believable world for many to enjoy. 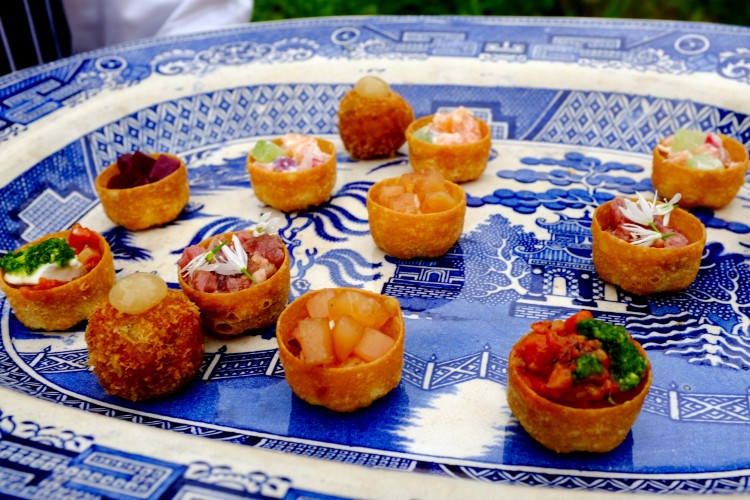 The food at Hay is certainly worth a mention as a few London eateries set up camp for the three weeks of the festival. I dined with a paper plate from the Spanish restaurant Hispania on a couple of tapas dishes. It certainly felt like posh camping. 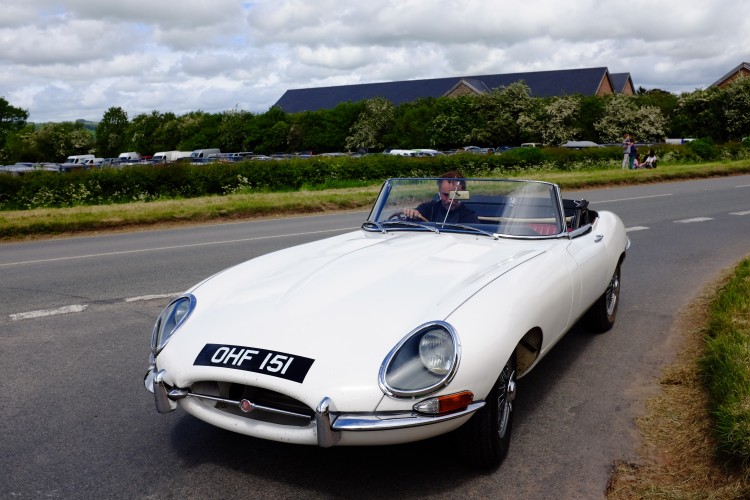 The afternoon took me to Hay-on-Wye. Antique shops, teahouses abound. I could have bought anything that afternoon from an ancient tin bath to a brace of stuffed swans! The town is full of festival-goers with a jolly atmosphere prevailing. There are some great shops like The Old Electric that sells vintage clothing and up-cycled bits an pieces and well as doubling as a bar and internet cafe with a live music act. I don’t think they could have crammed in any more if they had tried! 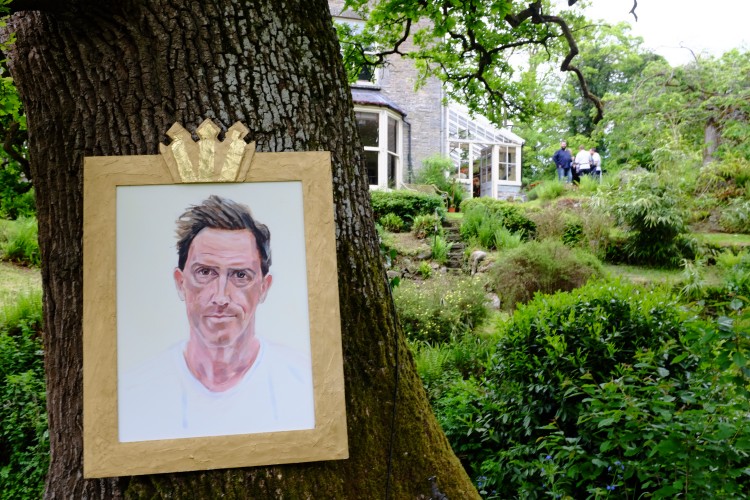 I had been invited to a private house party by the artist Janet Lance Hughs and her charming husband Tim. Their setting is enviable. It’s just a short stroll from the village (a word of caution here most houses don’t have door numbers just names so it’s easy to get lost). Their enormous rambling house is charming and has its own stream running through the large garden. The paintings were positioned around the garden gracing many easels. Strangely incongruous but actually fitting, as she is predominately a landscape artist it made for a stunning exhibition. There were also portraits from an ongoing project that is capturing Welsh actors. Unlike a gallery exhibition where you always seem to find yourself next to somebody (and their opinions) this was spaced out allowing one to ponder the pieces in one’s own space. The garden itself is has its own peculiarity in that half of it is in Wales and the other half in England. 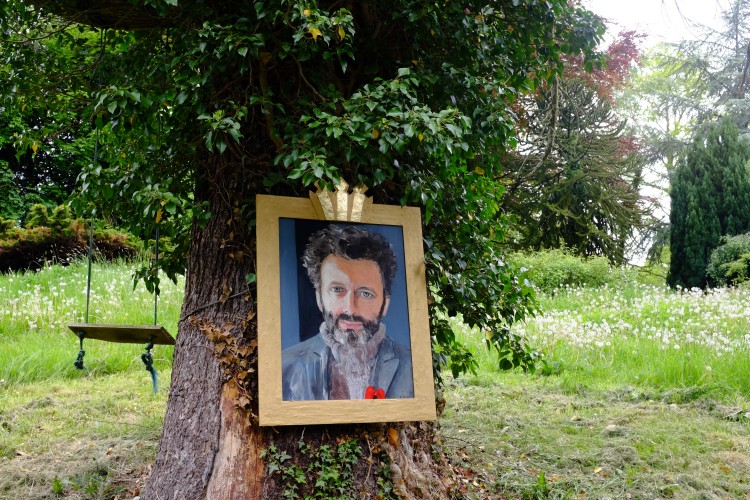 The selected guests were given some brilliant food by renowned local chef Stephen Terry and his team. He runs the famed Hardwick restaurant, much lauded by fellow chefs and diners alike. I think I will have to try it out as the crispy pork belly delights that I couldn’t stop eating left a lasting effect on my palette. 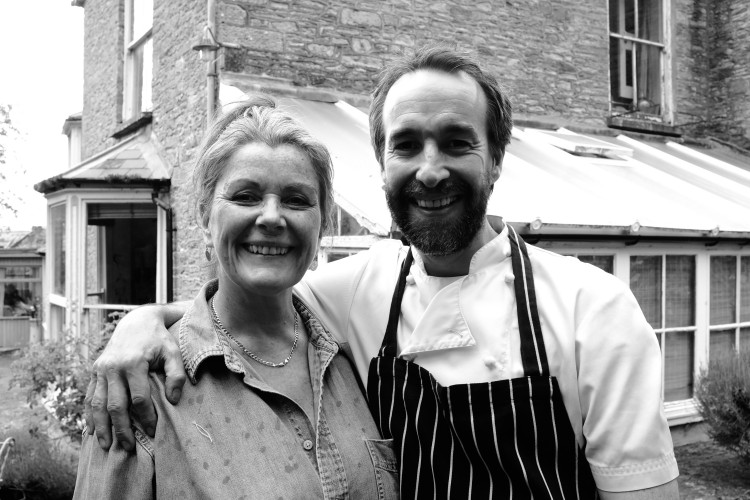 Among the guests was the playwright of the moment Laura-Jane Foley who has just had a sell-out run of her play An Evening with Lucian Freud which starred Cressida Bonas, Prince Harry’s ex squeeze. The play received rave reviews from the harshest of critics including the Daily Mail’s Quentin Letts no less. Laura-Jane is engaging company and there was talk of taking the play to off Broadway and her next project that I’m sworn to secrecy about. 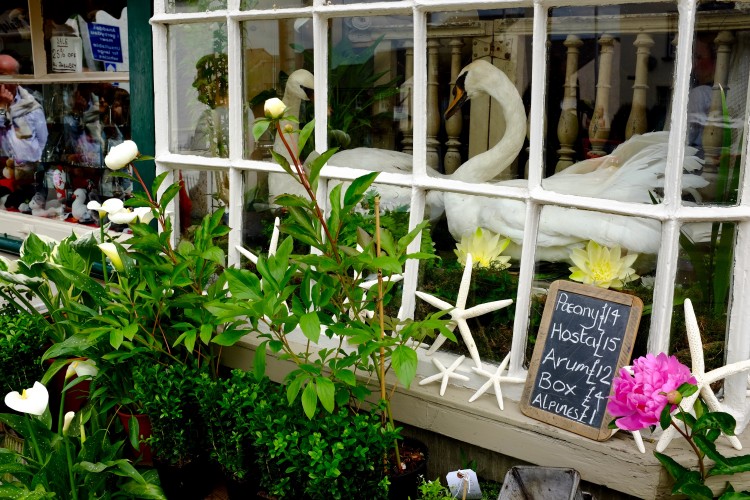 The following day I called in to see what Germaine Greer’s take on Shakespeare’s women was like. It was an amusing hour with Germaine who on the whole was on best behaviour and clearly illustrated her command of the subject. The lectures are sometimes what you’d like to see on TV but you know will never get commissioned, for that reason alone it’s worth the visit. 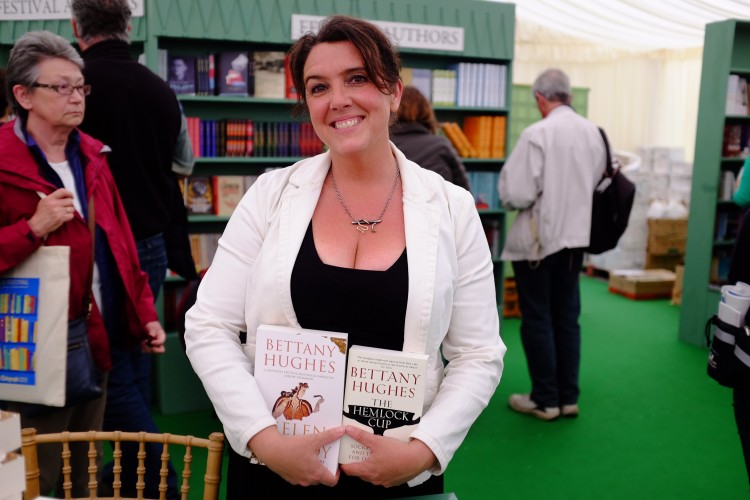 The festival offers so much for so many. Families are well catered for in the form of craft workshops, talks by children’s authors, the Starlight Stage, Make and Take and much more. Adults can indulge their every literary whim with lectures and talks with leading authors and progressive thinkers. The bookshop is amazing and Oxfam have a welcome presence with their second hand book emporium that offered real bargains. Oh and you might just get the chance to talk to your favourite author at a book signing, fun for all the family really.