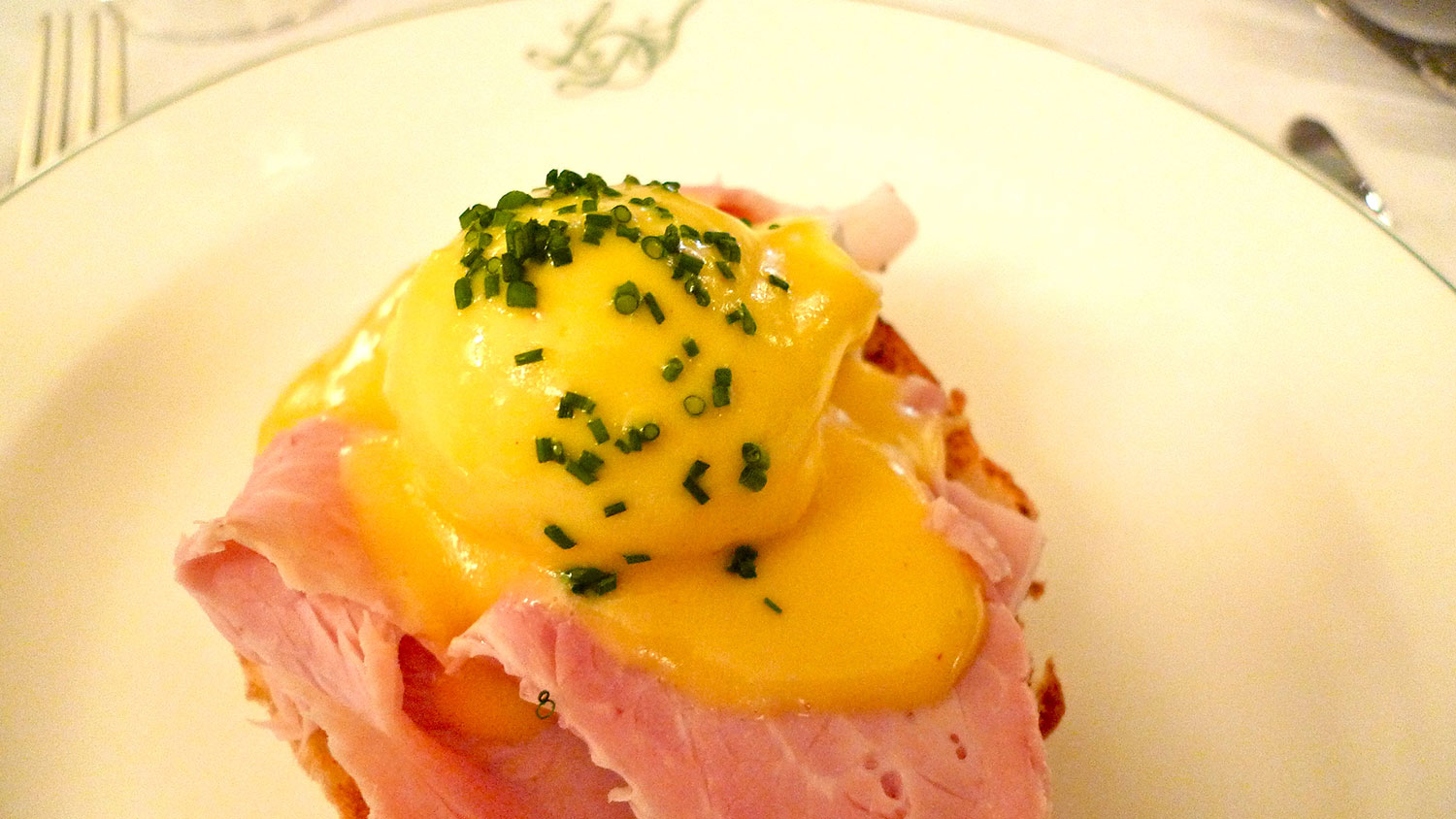 An autumn day in London is I think something to cherish, especially this particular day, as it was so wonderfully mild.  The leaves were fluttering around in the breeze with the sun catching the lighter ones creating a constantly changing astral portrait of Trafalgar Square.  It almost seemed a shame to carry out our plans.  We wanted to visit the Glamour of the Gods exhibition at the National Portrait Gallery – Hollywood portraits from the John Kobal Foundation.  And as enticing as the weather was we had to go, it was the last day.

Now to do this justice we wanted to be fed and watered, but not so stuffed that we couldn’t move with ease around the gallery.  So I was delighted to find out that only recently Les Deux Salons had started to provide a brunch menu and it was only just around the corner form the exhibition.

We arrived chatting about the stars of the silver screen we would see later, Clarke Gable, Jean Harlow, Joan Crawford nothing quite beats the glamour of that age in cinema captured in glorious black and white.  This was going to be a great afternoon I could tell, the cameras were still rolling.

The staff at Les Deux Salons could give lessons in courtesy to any restaurant in London.  Everybody but everybody was just delightful.  The restaurant in on two levels, we were seated downstairs on a very welcoming green leather banquette.  It has a lush feel to it, a sort of relaxed swish about it.  Effortless, stylish – behaves like it’s been there for years all at once.

But the history of Les Deux Salons is quite a short one, set up by the brains and flair behind the Michelin starred Arbutus and Wild Honey only a year ago, this I think is their most flexible venture yet.  It offers a brunch menu, a lunch menu, afternoon tea (with tiered cake stands and everything!) and of course evening dining as well.

The first thing to say about our visit was I had the most delectable freshly squeezed orange juice I’ve had in a long time.  I’m certain that it had spent no longer than 30 seconds out of the orange before it hit my lips, simply just the best way to start brunch on a warm day.  With movie stars clearly still in our minds we kicked off with some traditional fare and had a ‘James Stewart’ Eggs Benedict, trusty and reliable and a ‘Gloria Swanson’ of a French Toast – “I’m ready for my close up now” we looked at it and then we devoured it.  Both were good and yolk was lovely and runny and the ham strong in the ‘James Stewart’.  I was surprised though, not to see croissant on the menu – a ‘Bardot’ brunch staple I would have thought?  But there are plenty of other contenders we didn’t try, like a Full English or Belgium Waffles.  Now along came a ‘Marlon Brando’ of a Cheese Burger, bristling with pent up youthful rage or should that be just the right amount of salad and nice and pink inside?  He was good, it was very good.  There were chips in a silver cup as well, these were OK but a touch pale and didn’t have the ‘wild one’ crunch I like.  But they did taste of chips.  A ‘James Cagney’ of a Sunday Roast provided roguish roast potatoes and some stellar beef and other roasted vegetables that were like ‘angles with dirty faces’ all full of taste and criminality.

I was beginning to wonder if we needed to go to see the movie stars at all – they were appearing on our plates quicker than ‘a streetcar named desire’.

The next stage in this assured production was a delightfully cutting ‘Elizabeth Taylor’ of a Glazed Lemon Tart with Creme Chantilly.  Striking, sharp, splendidly crisp bottom with a slight wobble, yes everything you could possibly want from Elizabeth Taylor on a plate.  This was just brilliant, I loved every mouthful of it.  Three cheeky ‘Marx brothers’ joined us in the form of warm lemon curd filled Doughnuts with a ‘night at the opera’ Coffee mouse.  They made us smile.

The cinematic experience of Les Deux Salons might seem a bit far-fetched, but this is a place that just oozes class and style, just like the bygone era of film we were about to see. By the time you read this, the Glamour exhibition will be over, but take some solace in the quote from Metro – Goldwyn – Mayer: they promised “more stars than there are in heaven”.  There might be the odd ‘B’ movie, but most of them are sure-fire blockbusters, you can see them on a plate at Les Deux Salons.  The cost of this glamour was £60 for two.