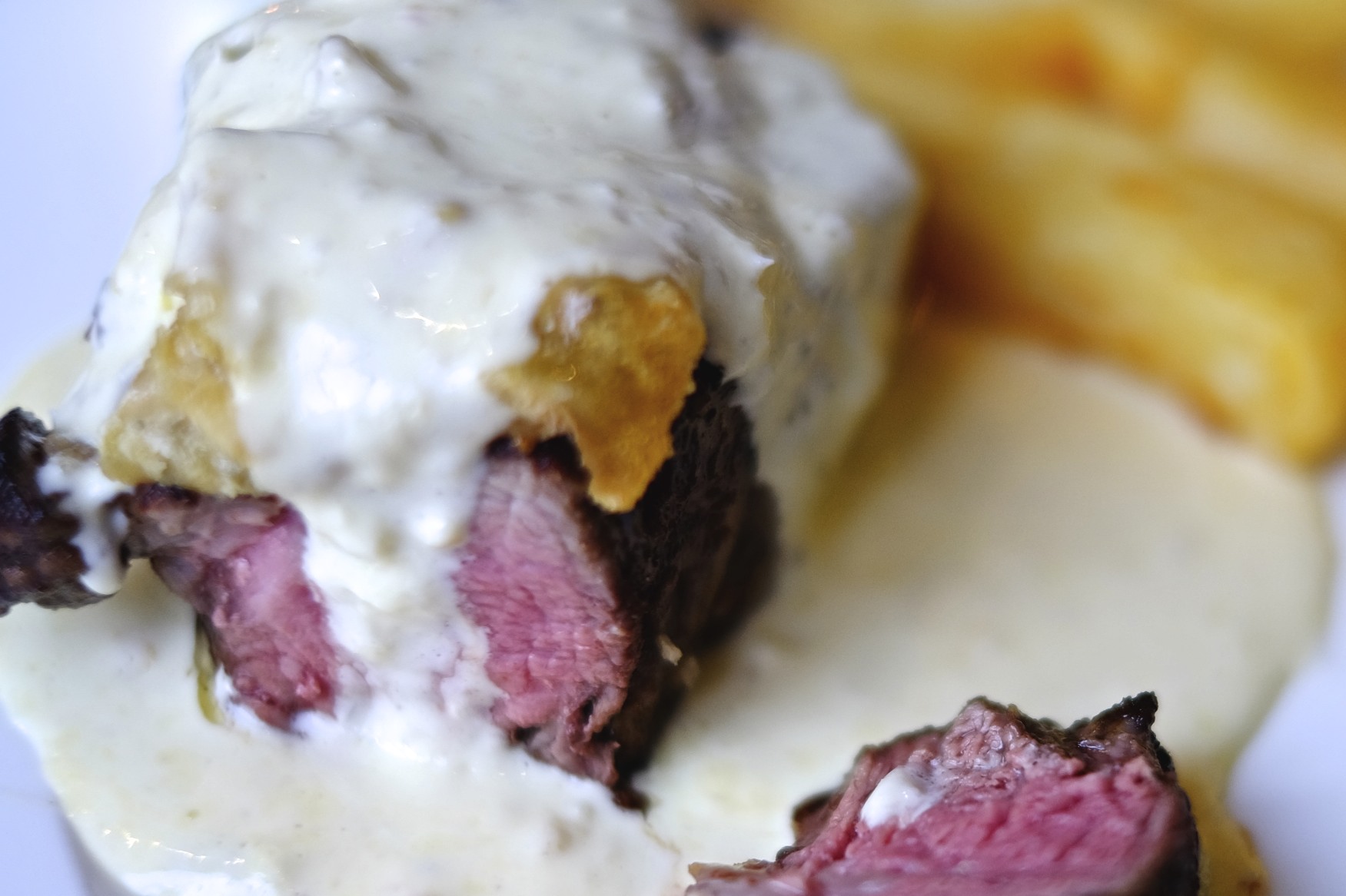 One of the pleasures of my job (some might comment isn’t your job total pleasure?) is that I get to take people out who don’t normally go out that often. In this case I’m talking about my favourite auntie B. Unashamedly Irish stock she has been married to her beloved T for over fifty years and is an absolute hoot to eat out with. 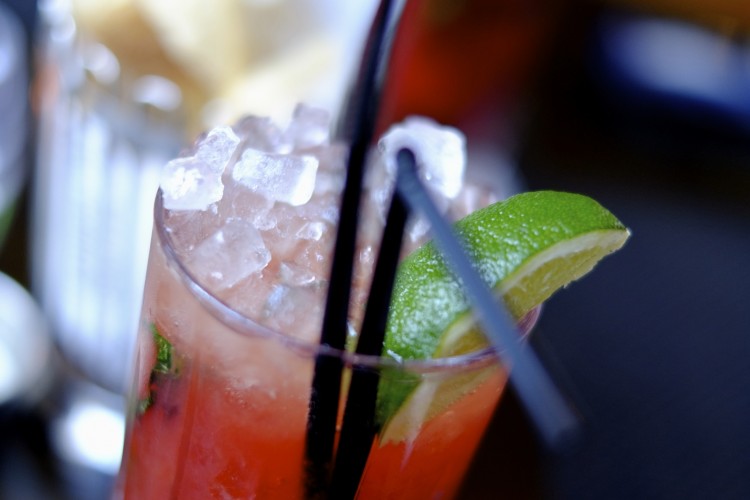 We met at the West India Quay Station, which was, rather brilliantly only 100m from the restaurant. Manhattan Grill sits underneath a giant hotel but as you enter from the quayside you’d never know. This area is now so sophisticated and thrusting with urban cool it’s hard to image the desolate wasteland depicted in the 1980’s British gangster thriller ‘The Long Good Friday’. In the film we see abandoned cranes and acres of crumbling buildings, Harold Shand the film’s protagonist is pitching to build for the proposed 1988 Olympics. Zoom forward 30 years and although it took a little longer for the Olympics to make it to London the place is unrecognisable. Except for a rather lovely touch, many of the original cranes are still there, preserved in dark grey paint watching like historic sentinels, keeping guard in silhouette. 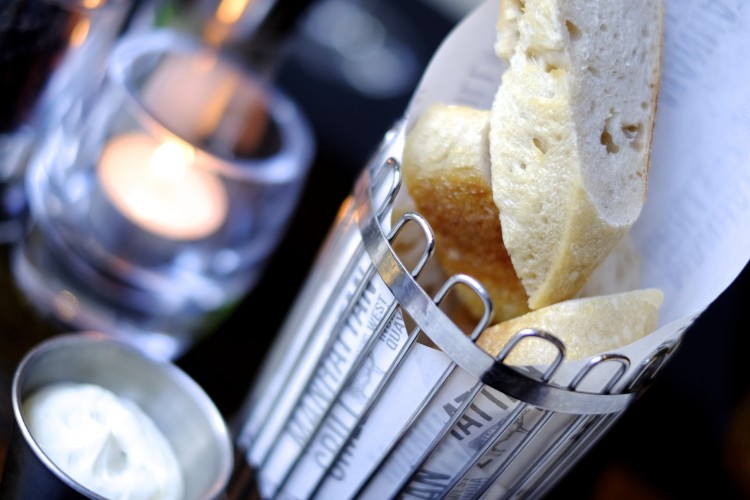 The space is big, really big because they designed it that way. There is plenty of room between tables and we were shown to a river view table with two of the sentinel cranes on guard. B had dressed up for the occasion but she needn’t have, it’s a smart casual place that has a relaxed feel from the off. But she looked very summery in matching yellow low shoes and yellow dress. 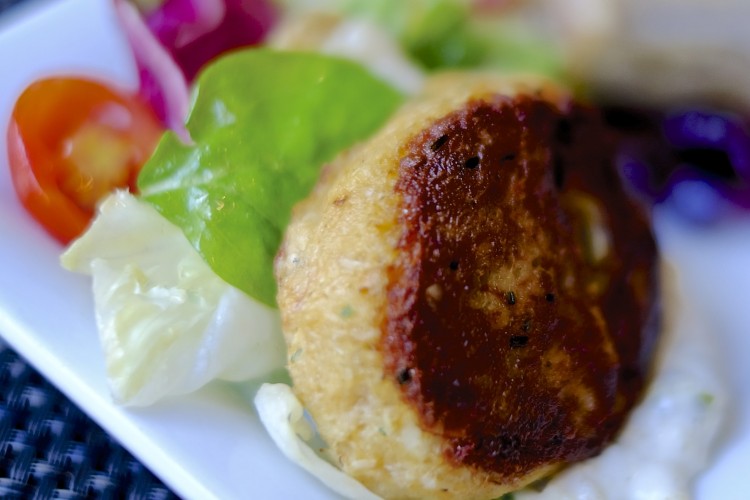 Manhattan Grill is essentially a steak house with a few other options thrown in for good measure. But there are steak houses and there are steak houses. One of the definite assets of this place was Cemal who looked after us. Half Turkish he has worked in the restaurant a while and is sure to go far. Nothing was too much bother for him, he was there when you needed him and he had a good knowledge of the wine list as well. My kind of guy and I think had she been a bit younger he would have been auntie B’s kind of guy too! 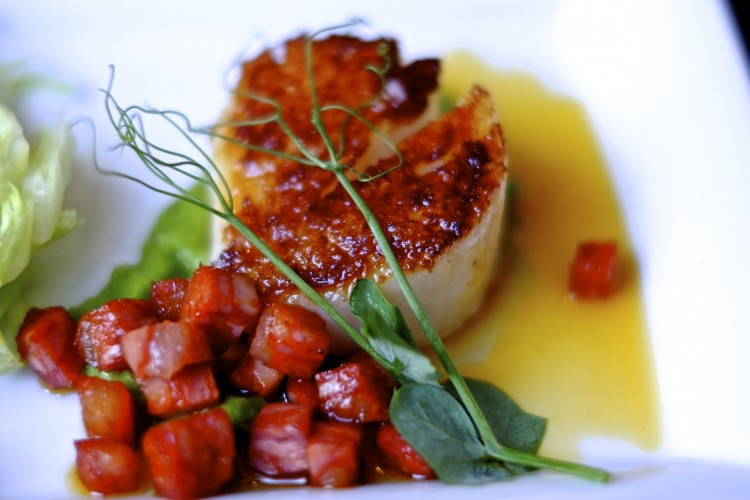 We enjoyed each a delectable raspberry mojito as we checked out the menu, this refreshing drink is rather tasty and definitely moreish. You have been warned! 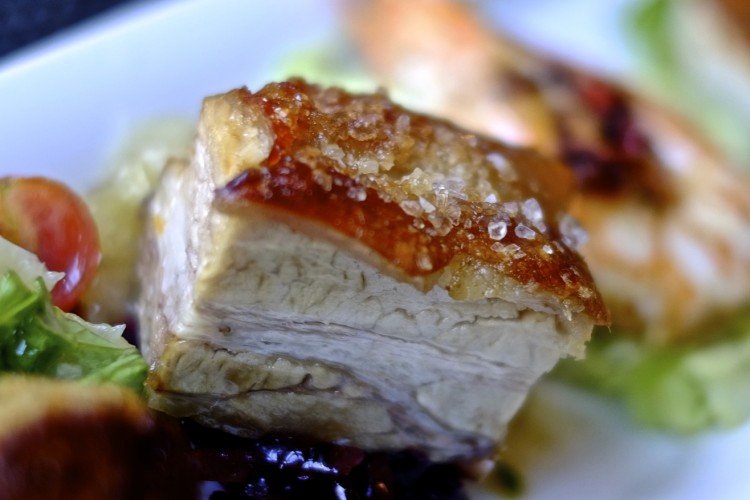 A selection of starters arrived and we tucked into seared Black Pearl oysters with a crispy chorizo and pea puree, this was a real winner, large scallops with just the right amount of chorizo not to overpower. Devonshire Pork belly with apple sauce and mustard cabbage was a generous portion and had more meat than fat; it was very tasty and was gone in no time. King prawns with a classic chilli butter sauce provided a spice and a crab cake made with both white and brown meat (not usually found) had real ‘bring me the sea’ feel to it. A very good start. B couldn’t decide which was the best between the crab and the scallop, I could, the scallop. I later found out the scallops are the most popular starter by far, no surprise there. 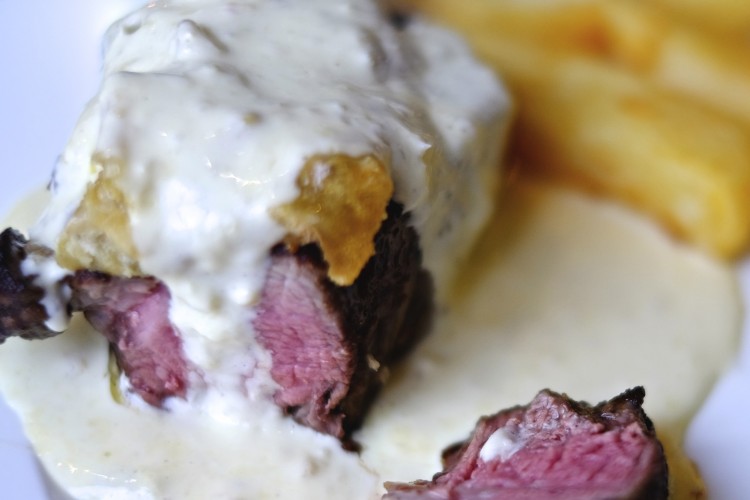 On to the meat of the matter, they offer Creekstone Kansas USDA Black Angus or Scottish Aberdeen Angus cuts here. For purposes of this review I chose American and B chose Scottish. My 8oz fillet was cooked well and tasted rich, they serve the meat with a crust of your choice as well as a sauce. For my crust I had blue cheese and sauce a creamy horseradish. Both were good, I rather liked the crust idea. B had a 10oz fillet (don’t know where she puts it all, she’d tiny) and a mushroom and hollandaise crust with a wine sauce. The crust was good but the wine sauce could have had a bit more depth. We tried each other’s steaks both professing a greater love of the others. The grass is always greener and all that. 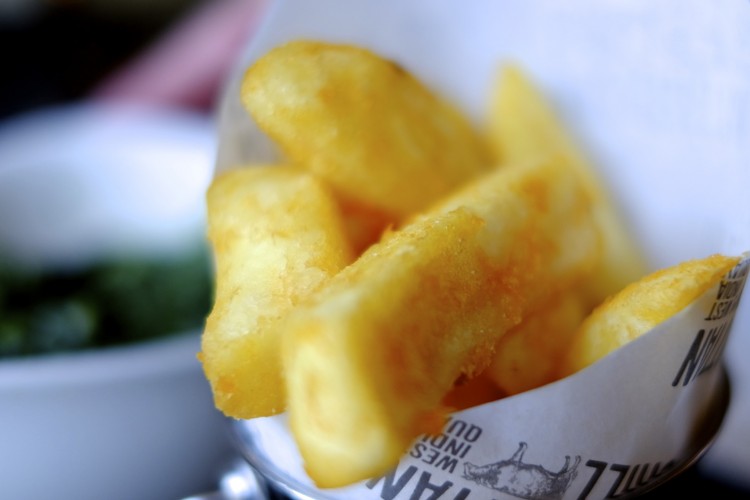 A few sides were ordered as well, some spectacular chips that get ten out of ten from me, and a few others that were fine but only luke warm. Not a deal breaker but they should be hot. A salad was a bit on the anaemic side. 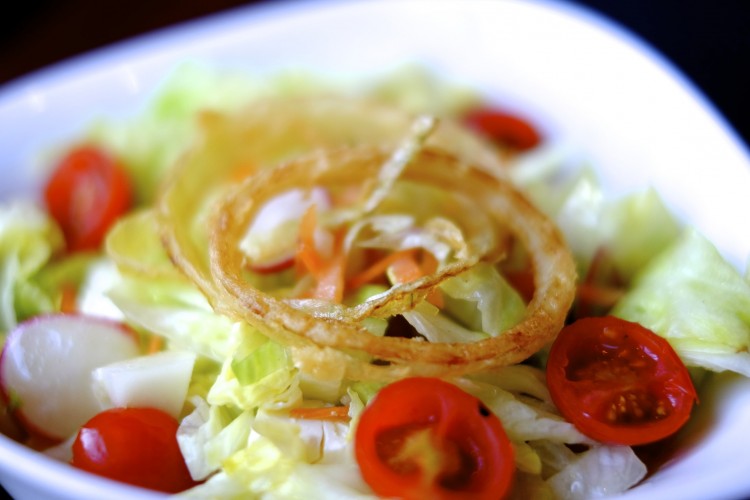 Cemal steered us in the way of desserts and in no time we ordered (but were quite full by this stage) an apple crumble for B and a Manhattan cheesecake for me. What were we thinking? The crumble had a strong cinnamon vein and the custard was laced with bourbon. It was really very good and robust with the bourbon adding just that little bit extra. My cheesecake was textbook perfect made in house it was served with a little fruit compote and finished me off. To wash it all down with a couple of glasses of Chateau Rieussec, Grand Cru Sauternes, Baron de Rothschild 2005, which did the job nicely. They hold a number of Rothschild wines here so if that’s your thing it’s worth asking what they have in as it changes. 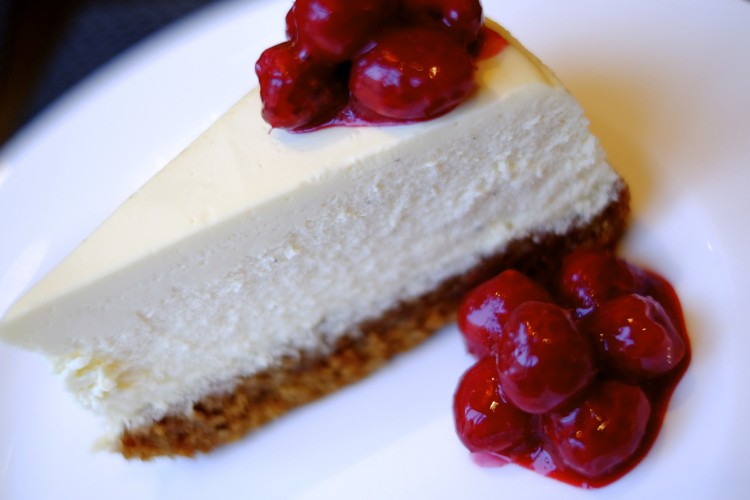 I’ve got to say the star of this evening was my auntie who always makes me laugh and has such a wicked sense of humour, but a very close second was the food and service. Cemal is a great asset to Manhattan Grill and should be looked after and nurtured. 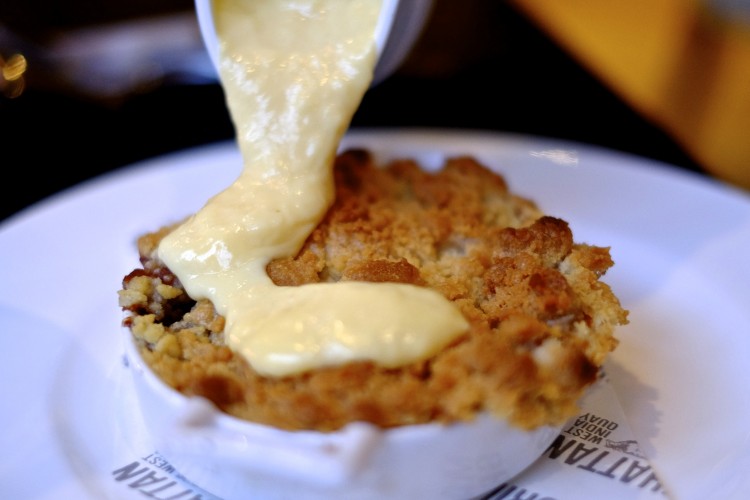 I see a lot of serving staff in my line of business and some work hard at it and some are born naturals Cemal is a natural who also works hard. I asked him how long he had been here and he instantly replied “Oh, I was born here”, I said “Sorry, I meant how long have your worked here?” “A couple of years” he cheerily replied. As far as I’m concerned it doesn’t matter where he was born but he could easily have been born in the restaurant he was so at home there. As for Harold Shand, he definitely would be eating here as well, if he was real. 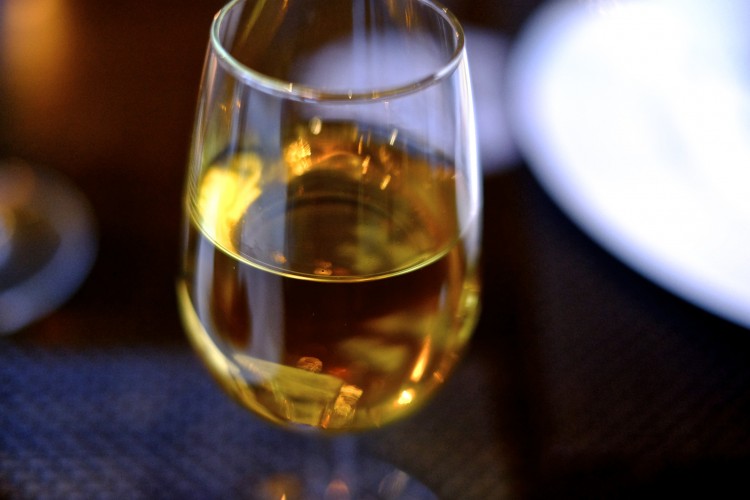 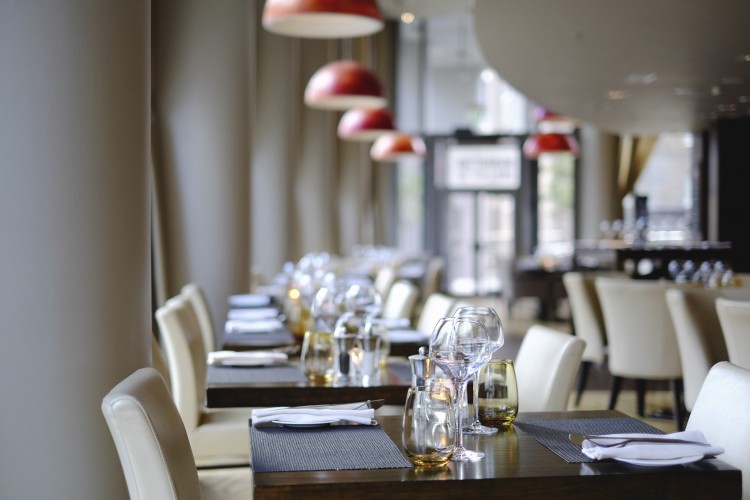