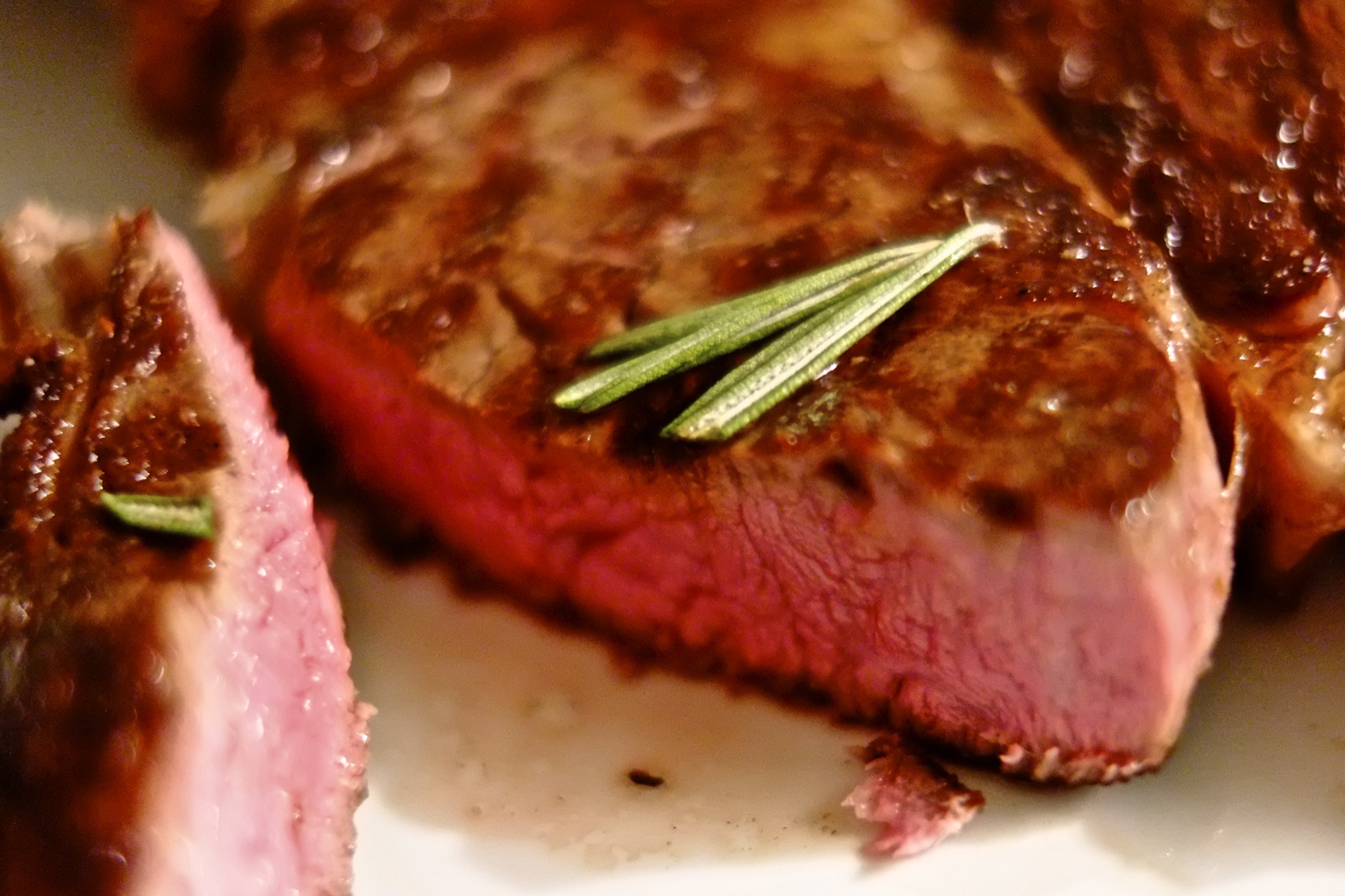 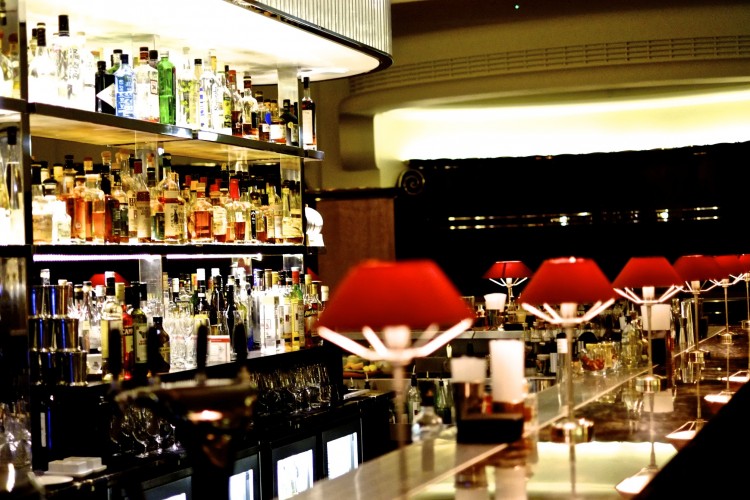 From an unassuming lobby on Brewer Street in Soho you descend a couple of floors to a glorious, decadent vast space cleverly divided into booths and plush banquettes.  This opulent room was once the Titanic restaurant of The Regent Palace Hotel.  Once the largest hotel in Europe, built in 1915 it closed a few years ago and has since had 4.5 million spent on renovations.  Every penny has been used wisely on MASH or modern American Steak House to give it its full name.  This is a smart sophisticated restaurant, which promises a lot. 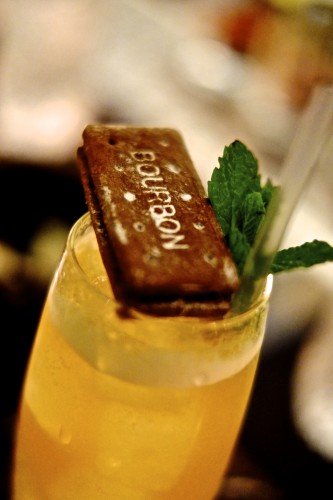 M and I are big fans of aperitifs, so it was with pleasure that we sat on leather-backed stools watching the bartender create a couple of beautiful cocktails for us.  M had enquired about non-alcoholic versions, as they were not mentioned in the extensive hardbound menu.  Quick as a flash he replied that he would make whatever M wanted with whatever she wanted.  She chose cucumber and apple.   A masterpiece from an experienced mixologist that continued with my bourbon based imbiber.    They cook all their own syrups, marinate all their own cherries, barrel age secret cocktails, and infuse with mint, liquorice and chilli.  It’s a real Willy Wonka philosophy on show here.  They don’t sell Scotch here just bourbons and rye whiskies and other spirits.  There is a lot of experience and knowledge behind this bar, worth a visit in itself. 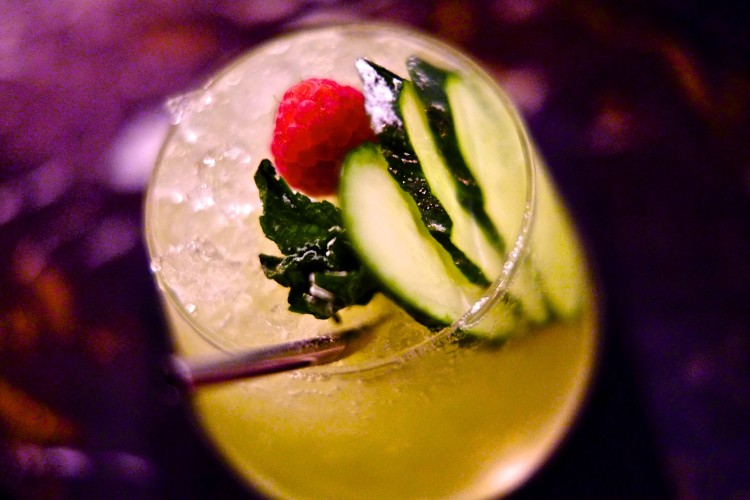 So down to the meat of the matter, or should that be the menu, this is unashamedly a celebration of beef from around the world.  Curiously, Modern American Steak House does not hail from across the pond but originated in Denmark where there are four branches.  Beef is what they take very seriously here.  You can choose from corn fed Nebraskan, Australian Wagyu, and Danish dry aged and Uruguayan cuts.  But I’m getting ahead of myself, starters first.  There is a good selection along the lines of an American brasserie in style.  M chose an enormous plate of perfect Serrano ham that had a deep sweet hit.  My scallops with soy sauce and mango was a delicate concoction of pasta with three Scottish scallops dressed with a beautiful sauce, very subtle and perfect as a starter for what was about to come. 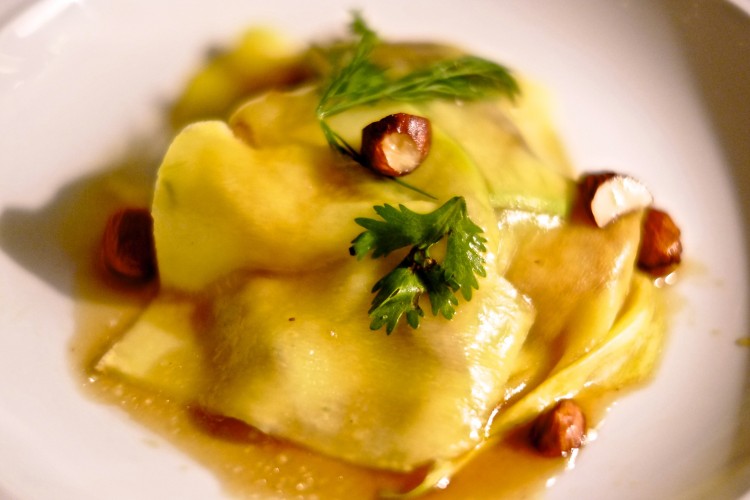 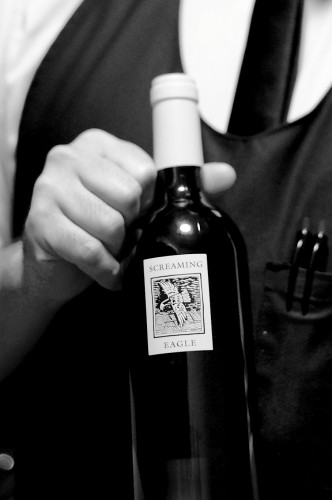 It worth mentioning that MASH takes its wine cellar very seriously as well as their meat, they have an enormous collection of American wines, perfectly looked after in the purpose built heat controlled walk in cellars, yes cellars.  One for red and one for white both kept at optimum temperature ready for drinking.  From the restaurant you can see the magnums and jeroboams through the glass walls just waiting to be opened, but don’t be put off they sell piccolo, demi and standard bottles as well.  The prices range from reasonable to ‘special’ occasion.  If you have your own preferred tipple then just bring it along on a Sunday evening and they don’t even charge corkage. 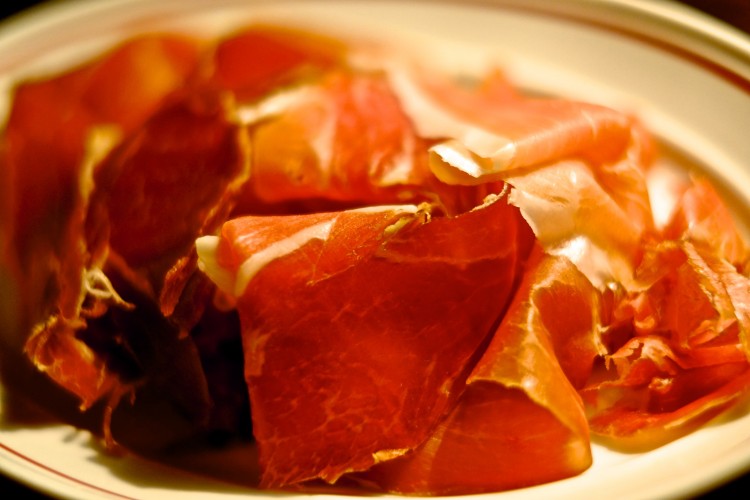 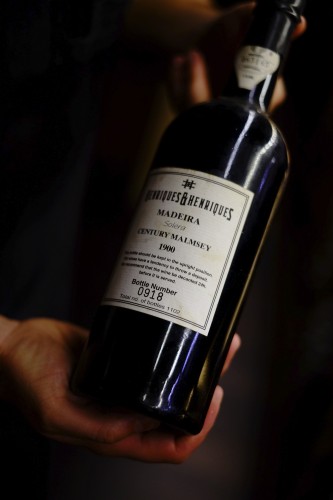 The main course with the sides were very good, M had an Australian Wagyu sirloin graded at 4.  This was tender and sweet and perfectly cooked.  The American 600g bone in rib eye I ordered was as you can imagine enormous and very good quality.  The care of meat is crucial to a restaurant like this and it shows here, it was packed with flavour.  Between the bar and the eating area are a couple of large display fridges with Danish meat hanging, part of the dry aging process.  This is in no way ghoulish just a testimony to how they care and pride about what goes on the plate. 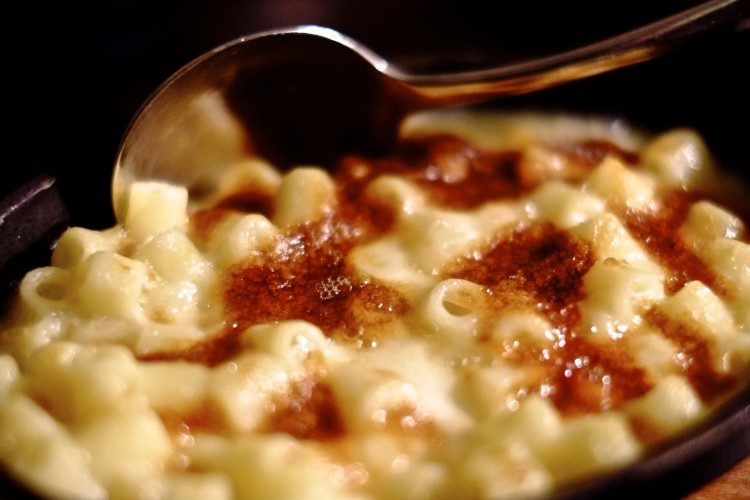 Recently I have become quite a fan of macaroni cheese as a side dish, it seems to appear in just about every American restaurant I have been to this year.  Here it was superb, a light sauce with melted cheese on top.  The fries were crisp and had chilli flakes on them but I didn’t really pick up any heat.  Creamy spinach was freshly made and was the only suggestion of green on either of our plates.  The steaks have a choice of sauces; we chose a classic peppercorn and a delicious garlic and thyme jus.  Both worked very well with the beef, my favourite was the garlic and thyme; it had a new depth in taste that added an extra dimension our plates. 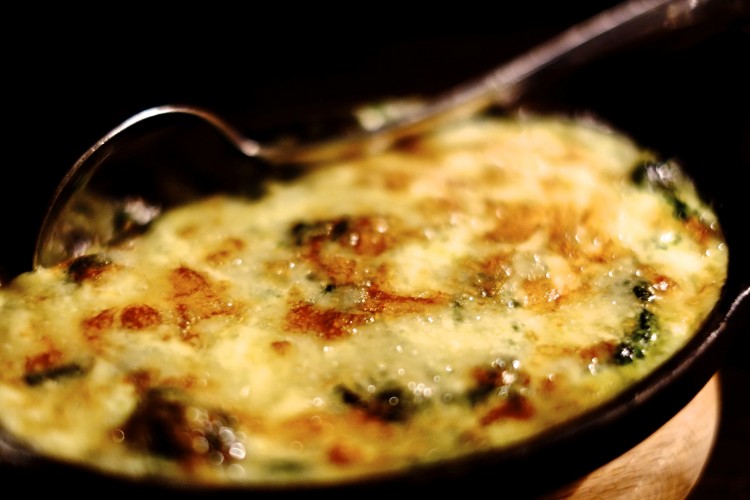 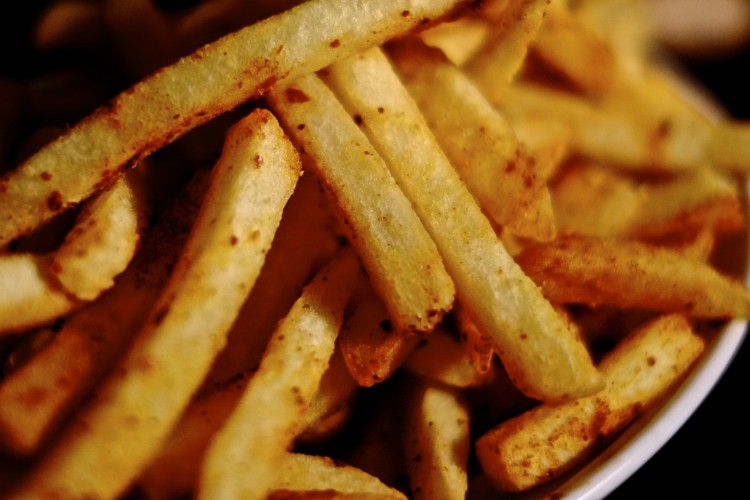 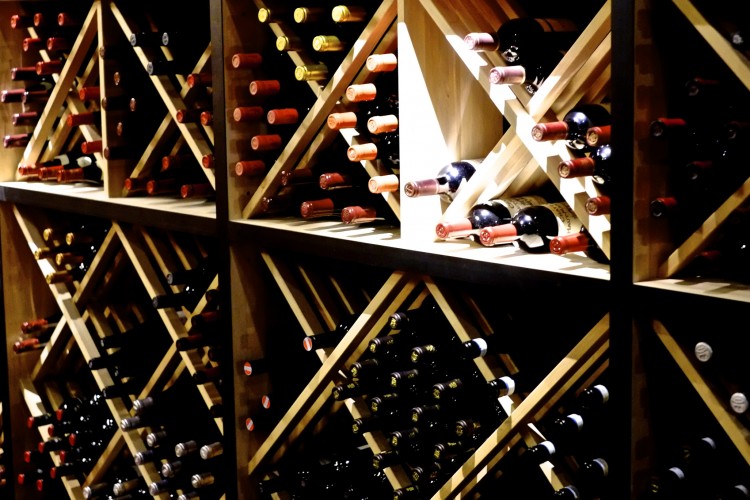 I couldn’t quite finish my steak, over a pound of beef had taken its toll.  But in the line of duty felt obliged to keep M company with a dessert.  M’s strawberries with meringue and a touch of vanilla ice cream was a good ending, sweet, fresh and quite sinful.  My profiteroles with a jug of warm chocolate sauce and ice cream initially seemed insurmountable in an Everest and Sir Edmond Hillary kind of way.  But with a steady and a sure-footed approach I made it to the summit and returned an empty bowl to the serving staff.  I think that the little glass of Cyprès de Climens, Sauternes probably helped as well. 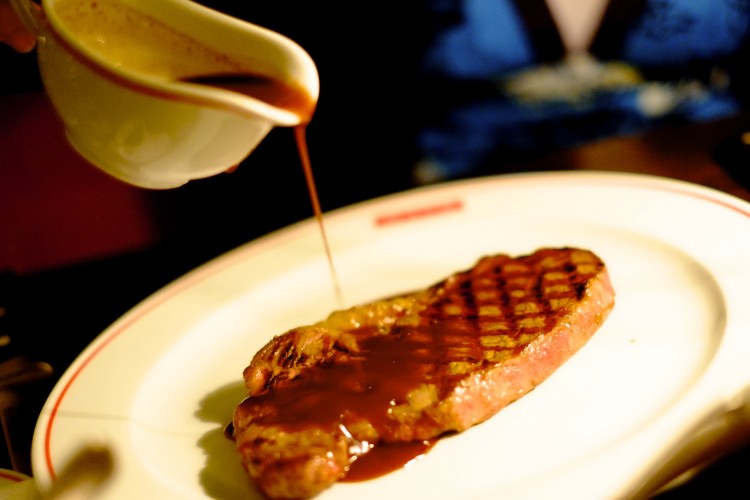 Mariann who looked after us picked up on the Hungarian part of our name (Vass which is pronounced Vash apparently) and revealed that she was also Hungarian.  It was as if we were long lost family, out came stories from the old country and recommendations about the menu.  Her warmth was an added bonus to a great meal. 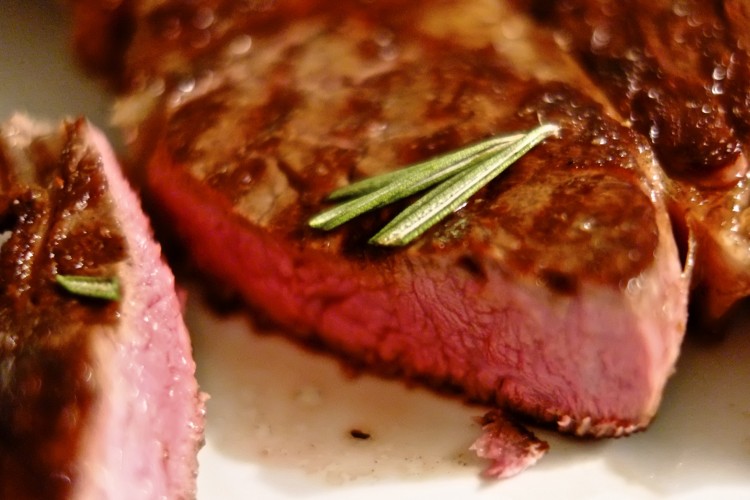 Eating in the subterranean MASH it is easy to forget the outside world above.  The space is large but at the same time intimate it also can accommodate private dining in a separate room.  The food is excellent and staff very helpful at explaining the complexities of beef from various countries and recommending wines to match.  This is what a top notch steak house should be, discrete and warm, somewhere to make you feel special.  From personalised cocktails, wonderful meat to an extraordinary wine list MASH has it all.  Such is its seductive qualities you should remember to ascend to reality at some point, but then again you might not want to, I didn’t. 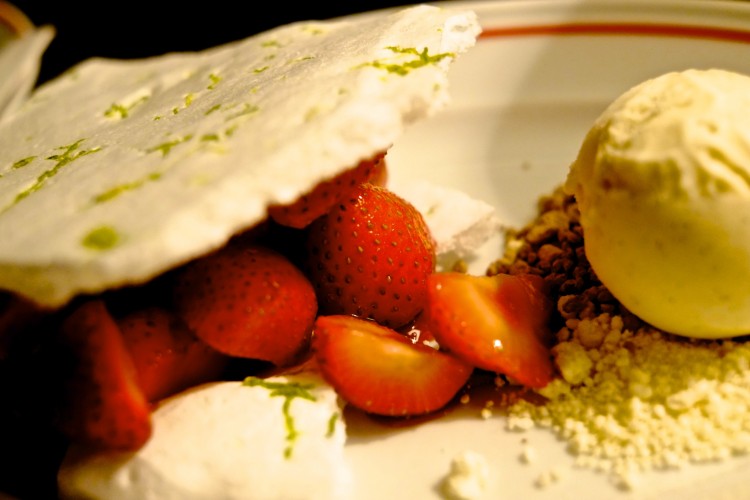 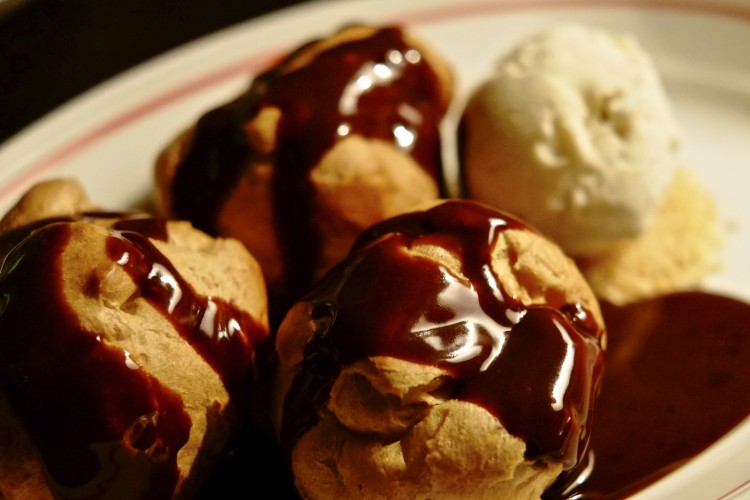 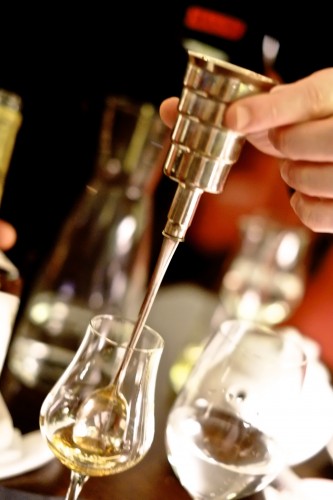