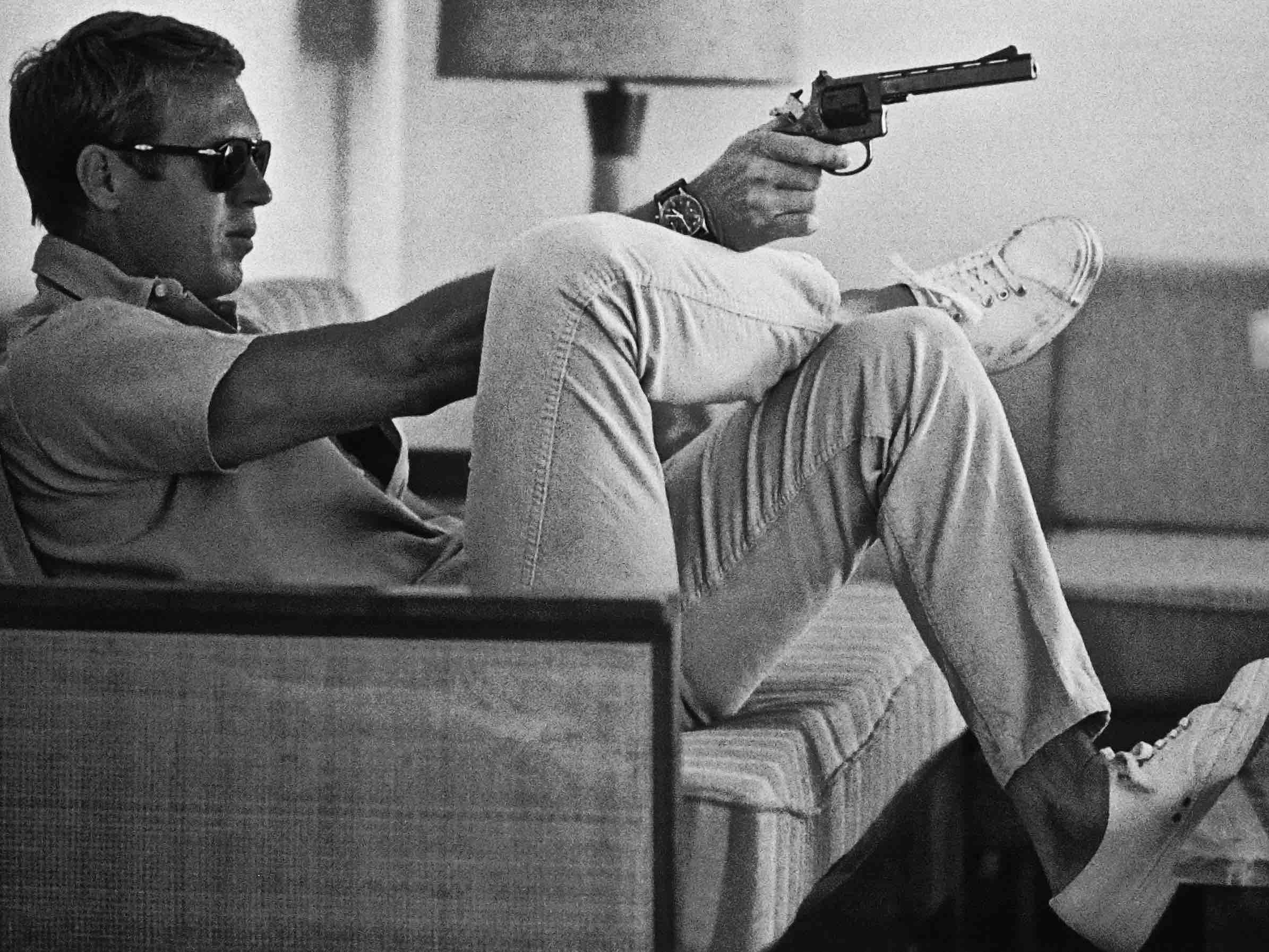 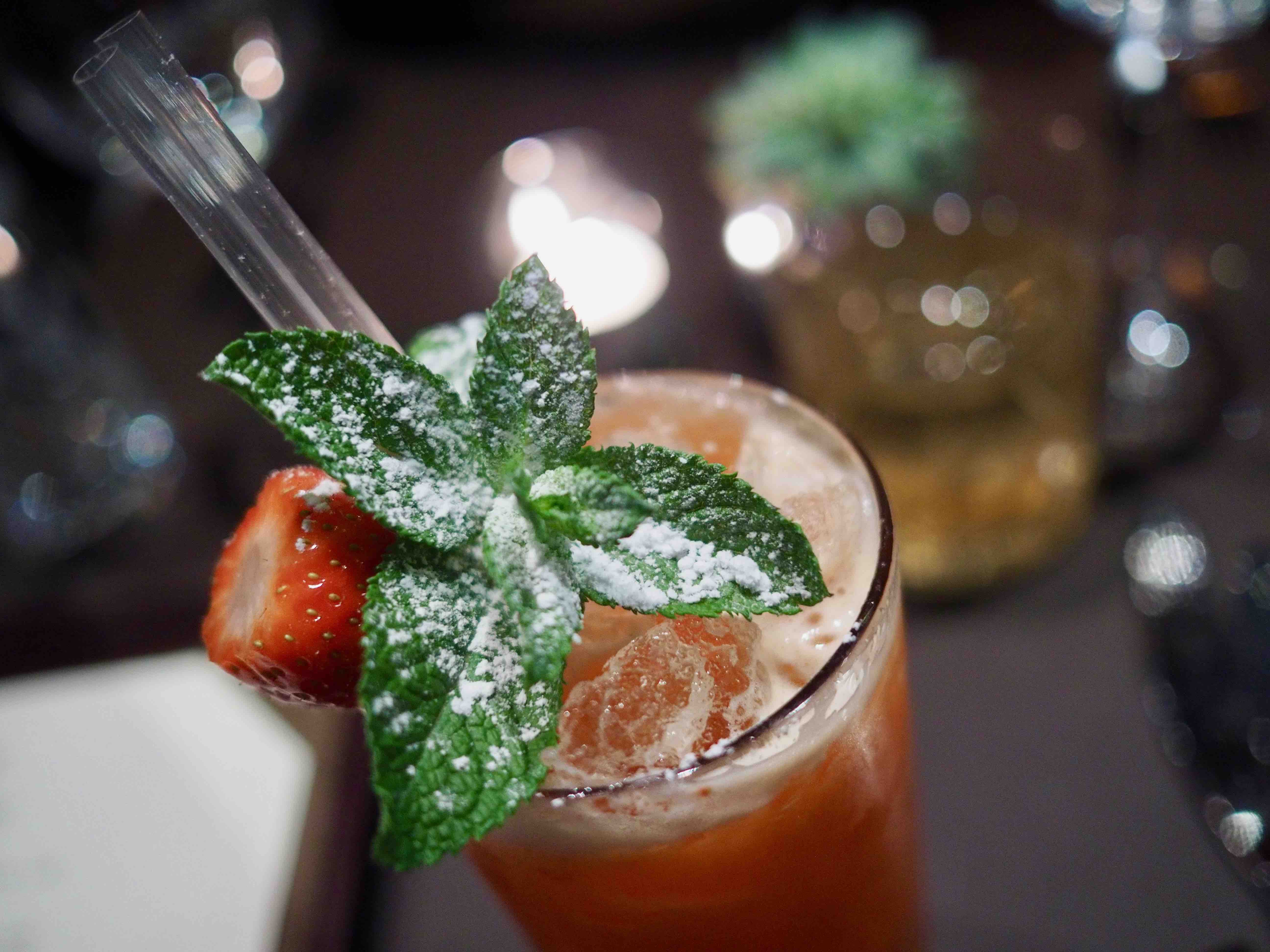 Can you see the connection between Somebody Up There Likes Me, The Blob or Nevada Smith? OK, I’ll make it a bit easier, can you see what links these, The Great Escape, Bullitt and The Thomas Crown Affair? That’s right they are all films that star Steve McQueen that American rough round the edges, but oh so cool actor. He has left his mark. His likeness appeared in a ‘remake’ of the Bullitt car chase scene advertising a Ford Puma in the late 90’s, you can buy McQueen International Barbour jackets or a TAG Huer watch on any high street. So it’s no surprise that there is a restaurant dedicated to Steve McQueen. 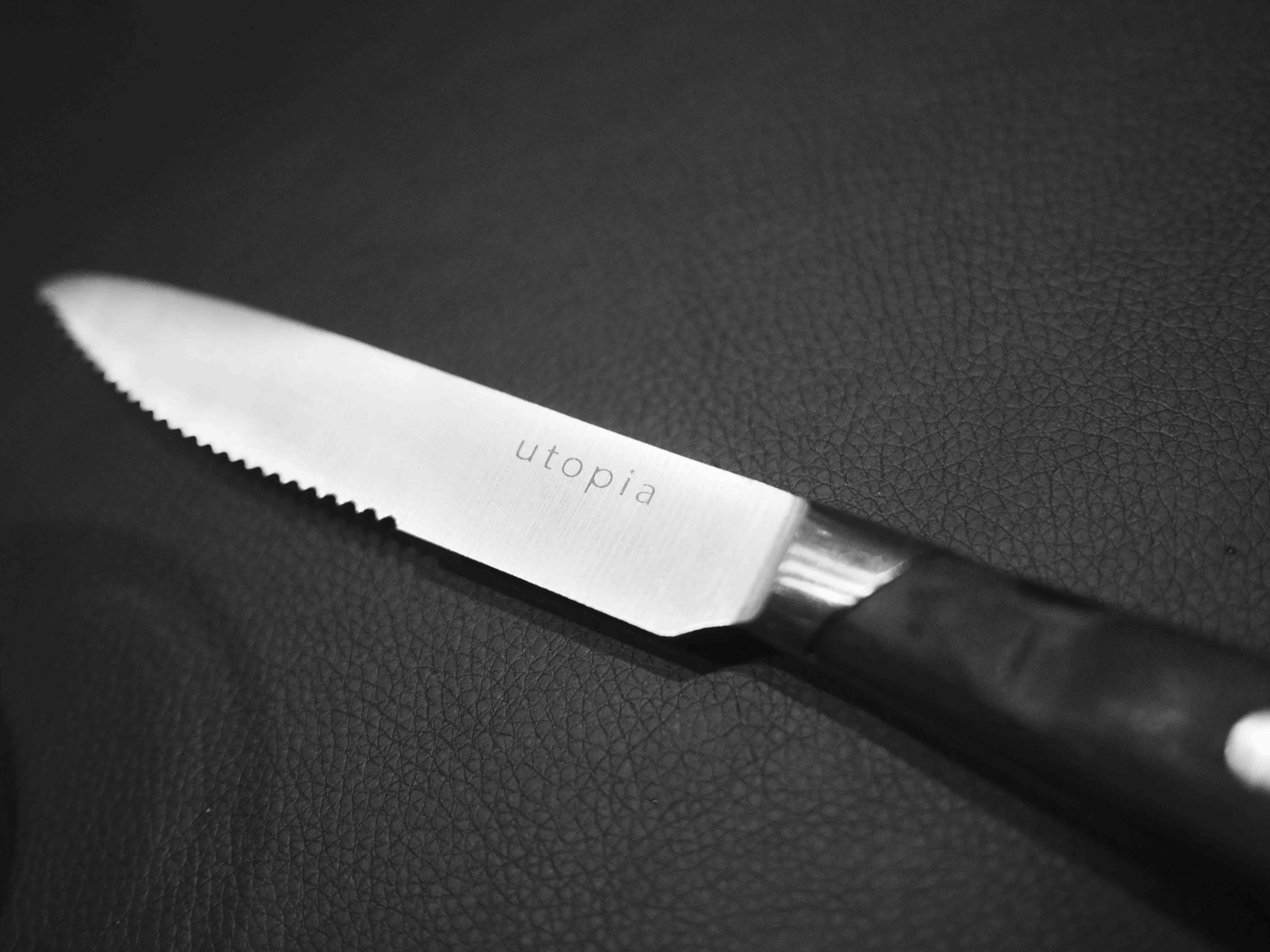 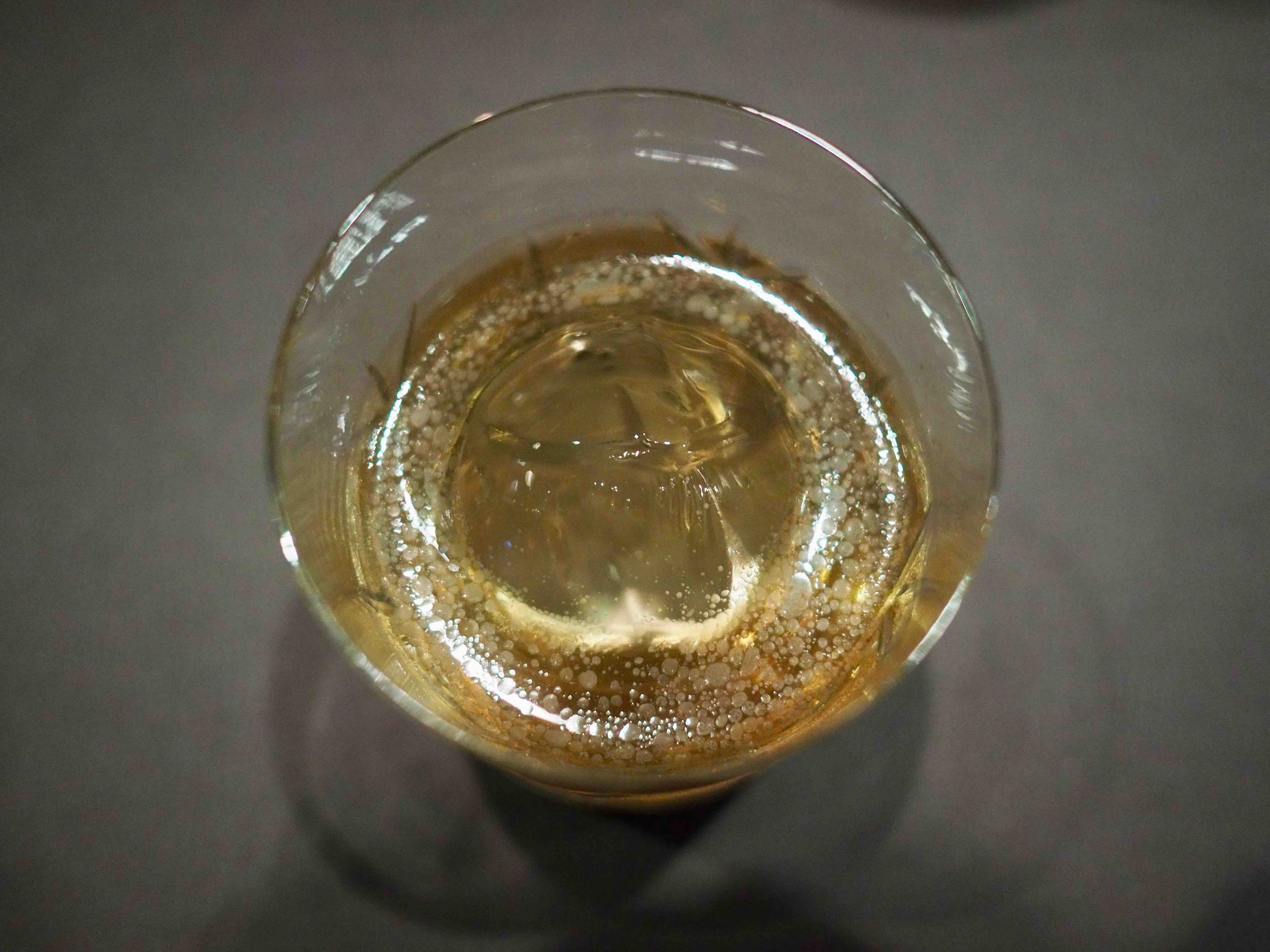 Fortunately this is a good thing as it could easily have been a themed pastiche of past glory. You can find it in London’s über trendy Shoreditch, which with its rough round the edges appeal, seems fitting for the screen icon. 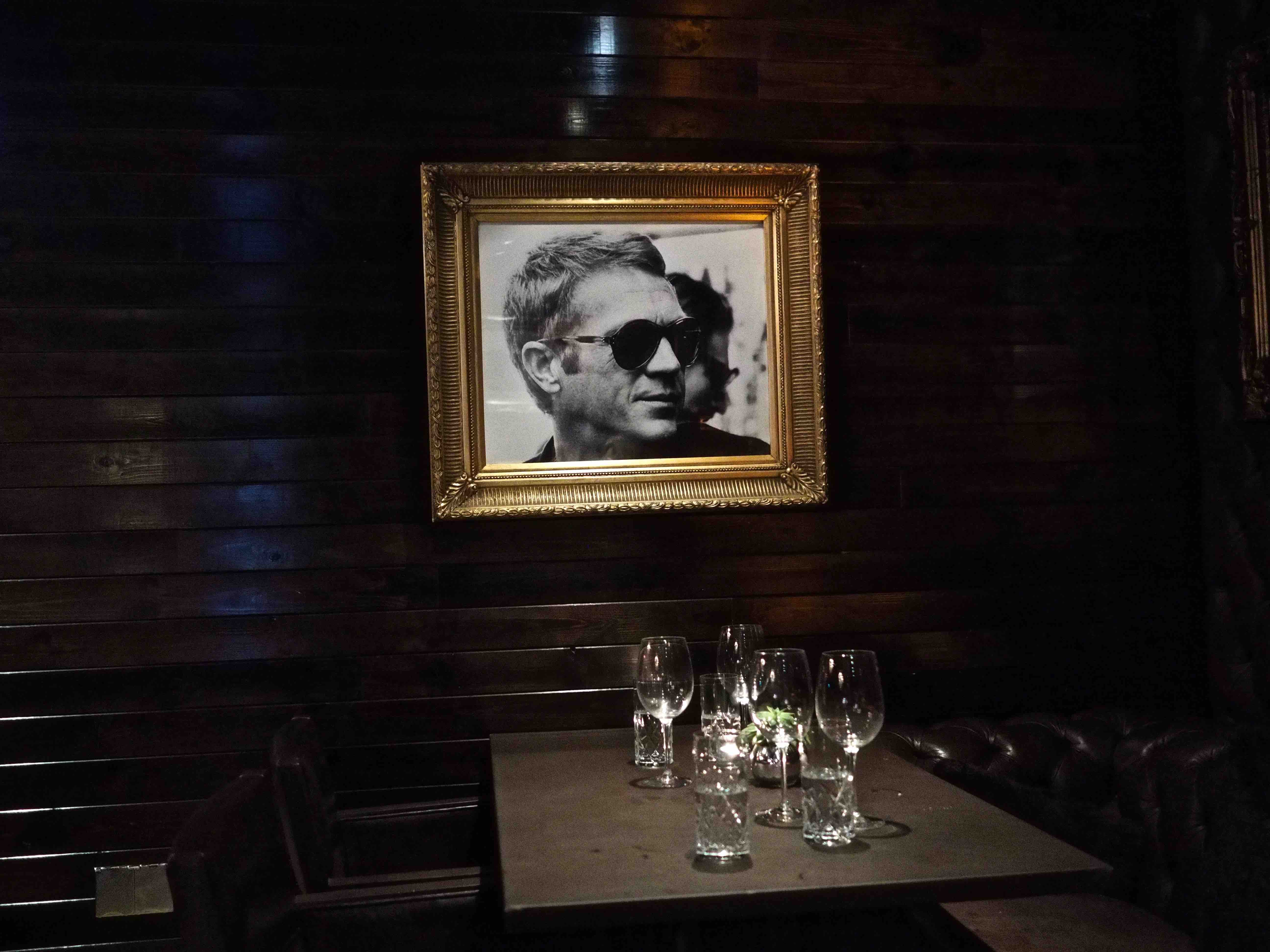 It’s a steak house so don’t expect molecular brilliance or the latest waffle or perfectly spiced Pho on the menu. But what you can expect is a very decent selection of starters and mains that deliver on every level that’s important: taste, value, appearance and enjoyment. 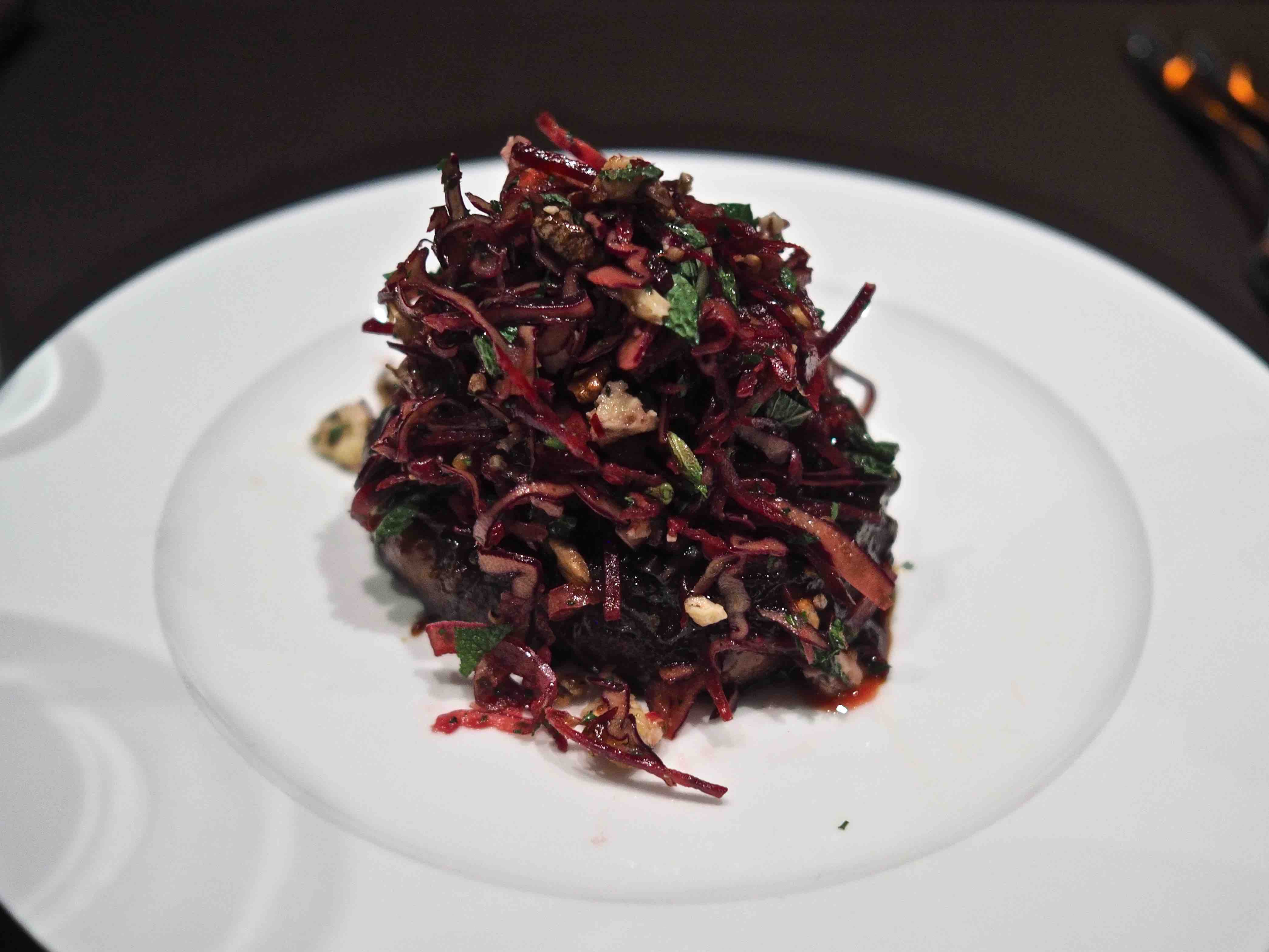 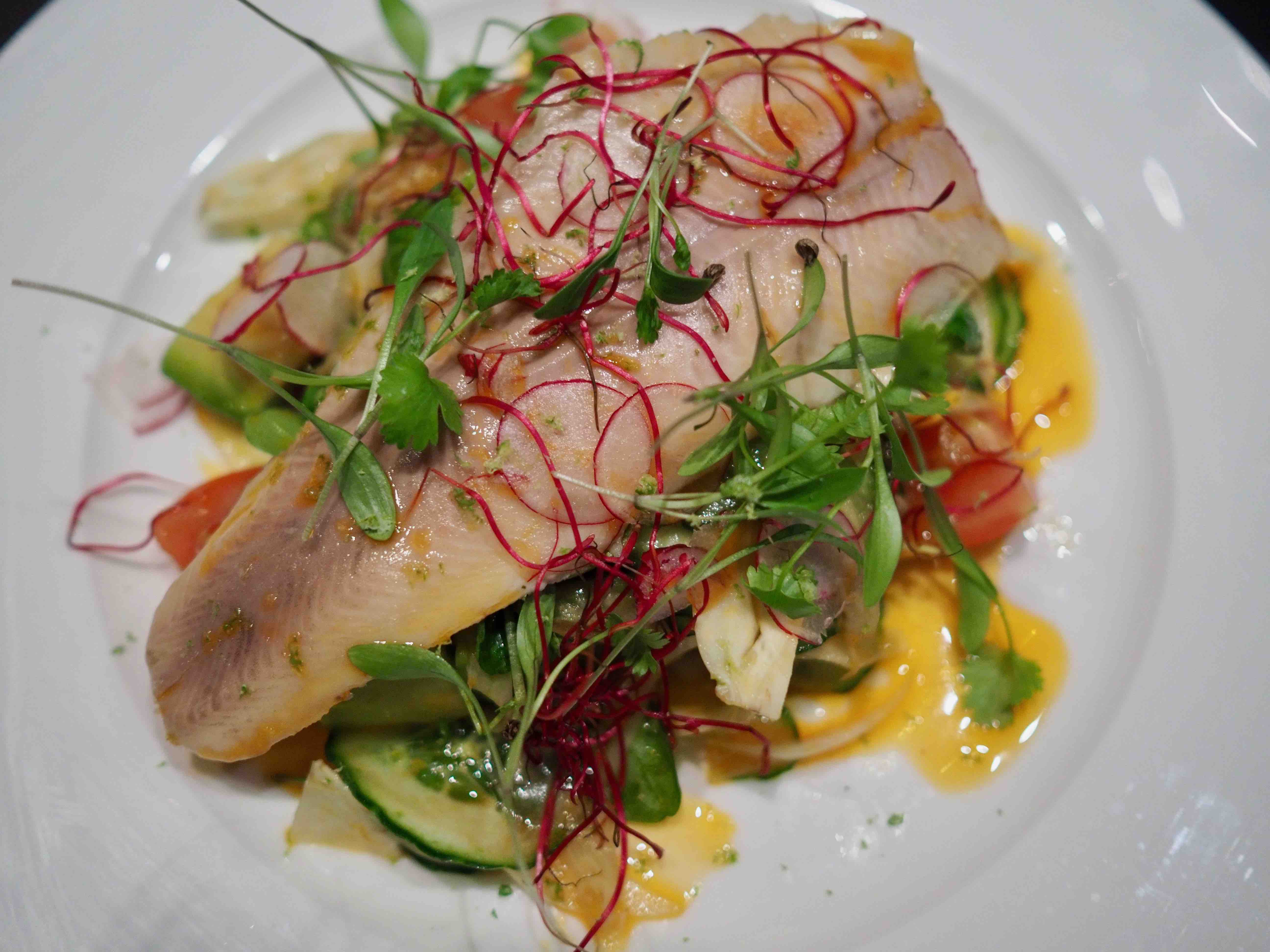 Then there’s the decor, it’s stylish, think leather Chesterfield sofas and leather banquettes. Oh and a few very classy black and white shots of McQueen in over the top gilt frames. It’s on a corner plot and as well as the grill there’s a bar, which really is a precursor to the night club downstairs. That part of the building was all dry ice and flashing lights so I left it alone. 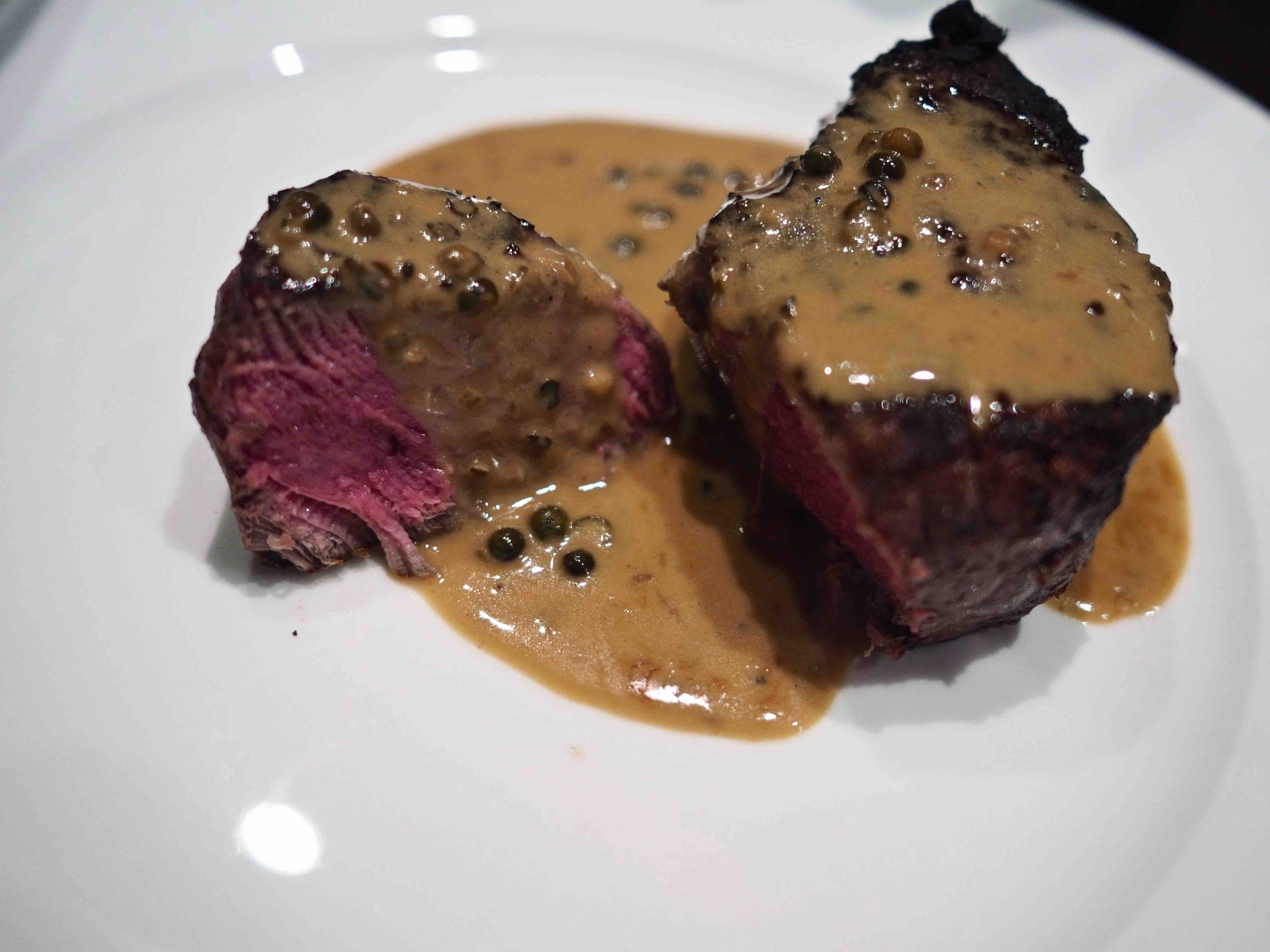 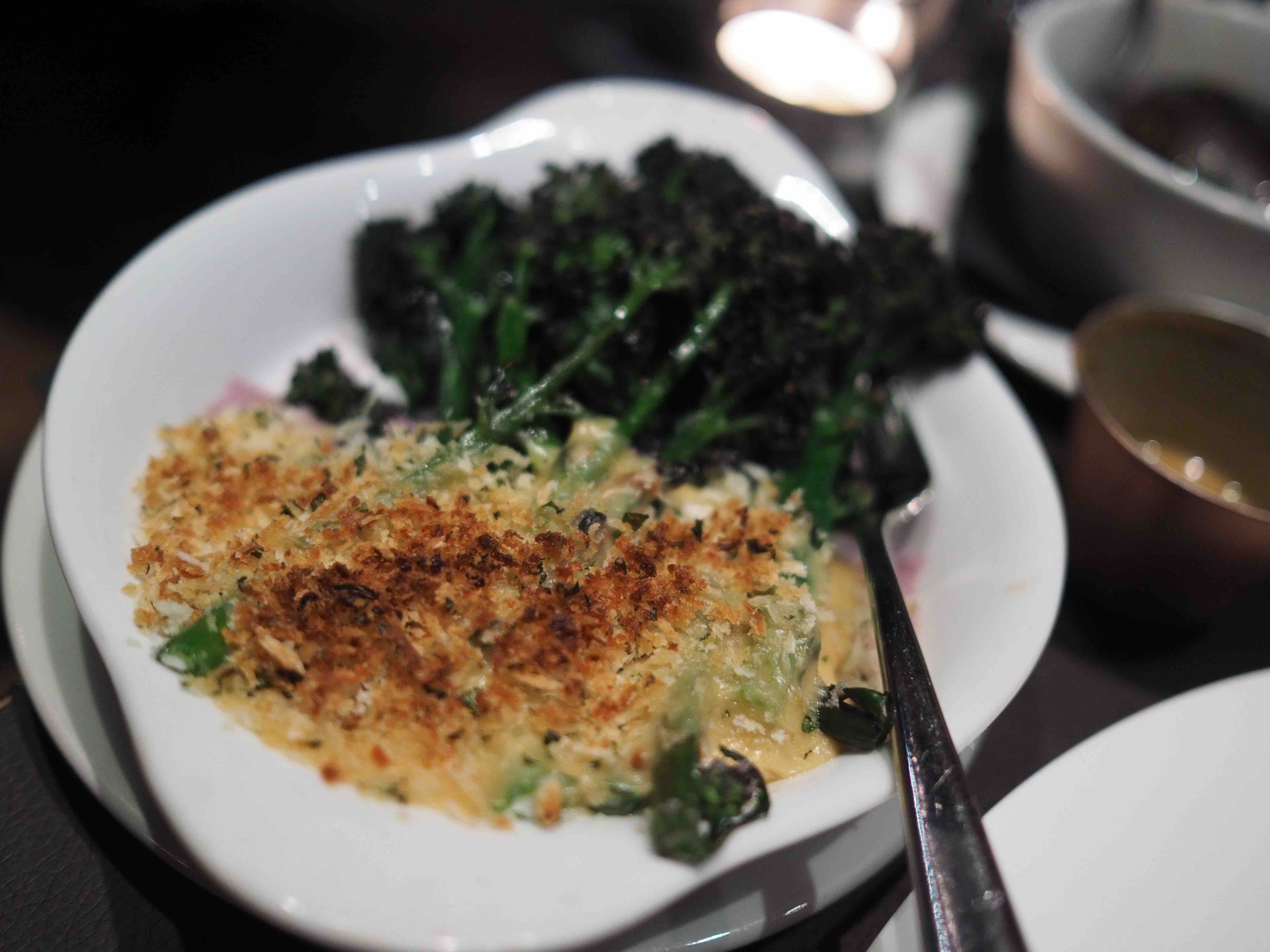 For the food try the BBQ braised pork belly with red slaw, Stilton and walnuts a generous portion of loveliness that melted in my mouth despite it being M’s dish (she did say have a taste). My London smoked salmon with dill cream cheese and salady bits was fresh and tangy. 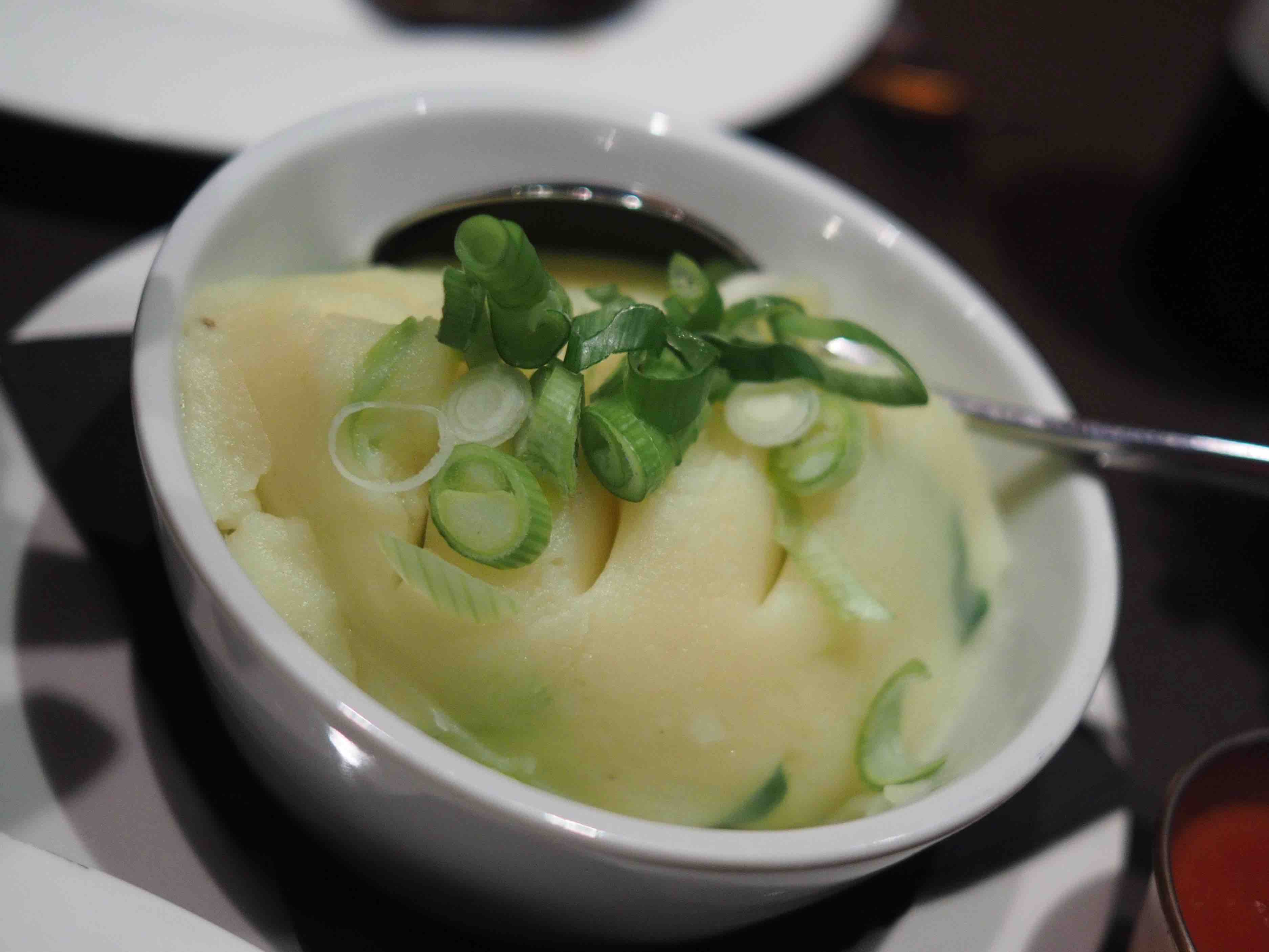 The service is tip-top here, everything came when asked for and all the food was hot (if it should have been). There’s also an added extra in the form of the cliental. In fact ‘extra’ is an appropriate word to use as we felt like extras on the set of EastEnders. The restaurant was populated by Guy Richie ‘geezer’ types, who knew how to treat a lady right and were doing the right thing. Lock, stock but thankfully not two smoking barrels. 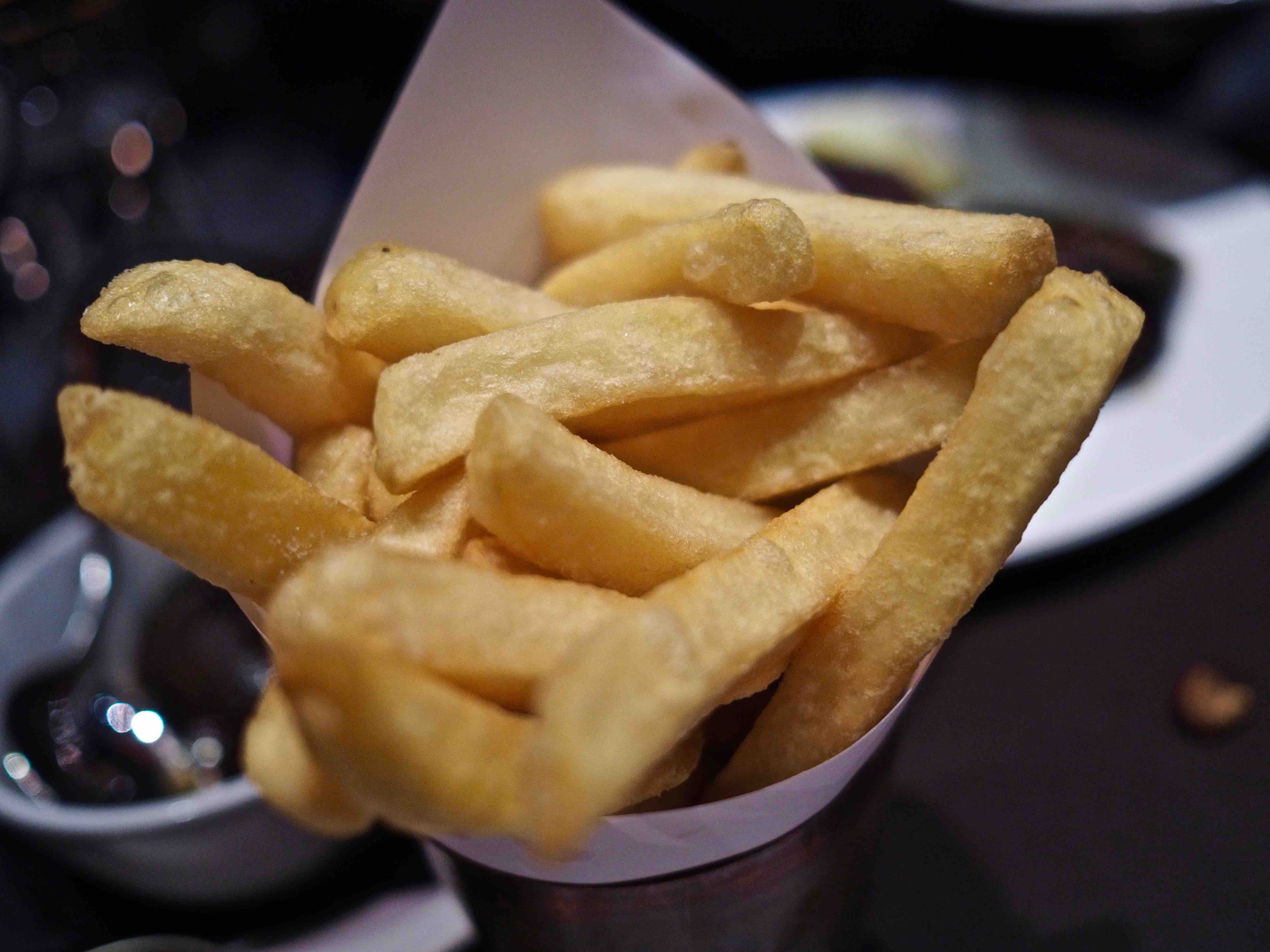 The main event was superb meat cooked exactly as we’d asked for with sides that were HOT. I hope all restaurants that offer ‘sides’ are reading this as I’m fed up with sides that are delivered a) after the main has been on the table for a while b) stone cold. This they have nailed at McQueen, everything was piping hot. In this day and aged beef (28 days since you asked) 300g was £33 and worth it, a damn fine steak. 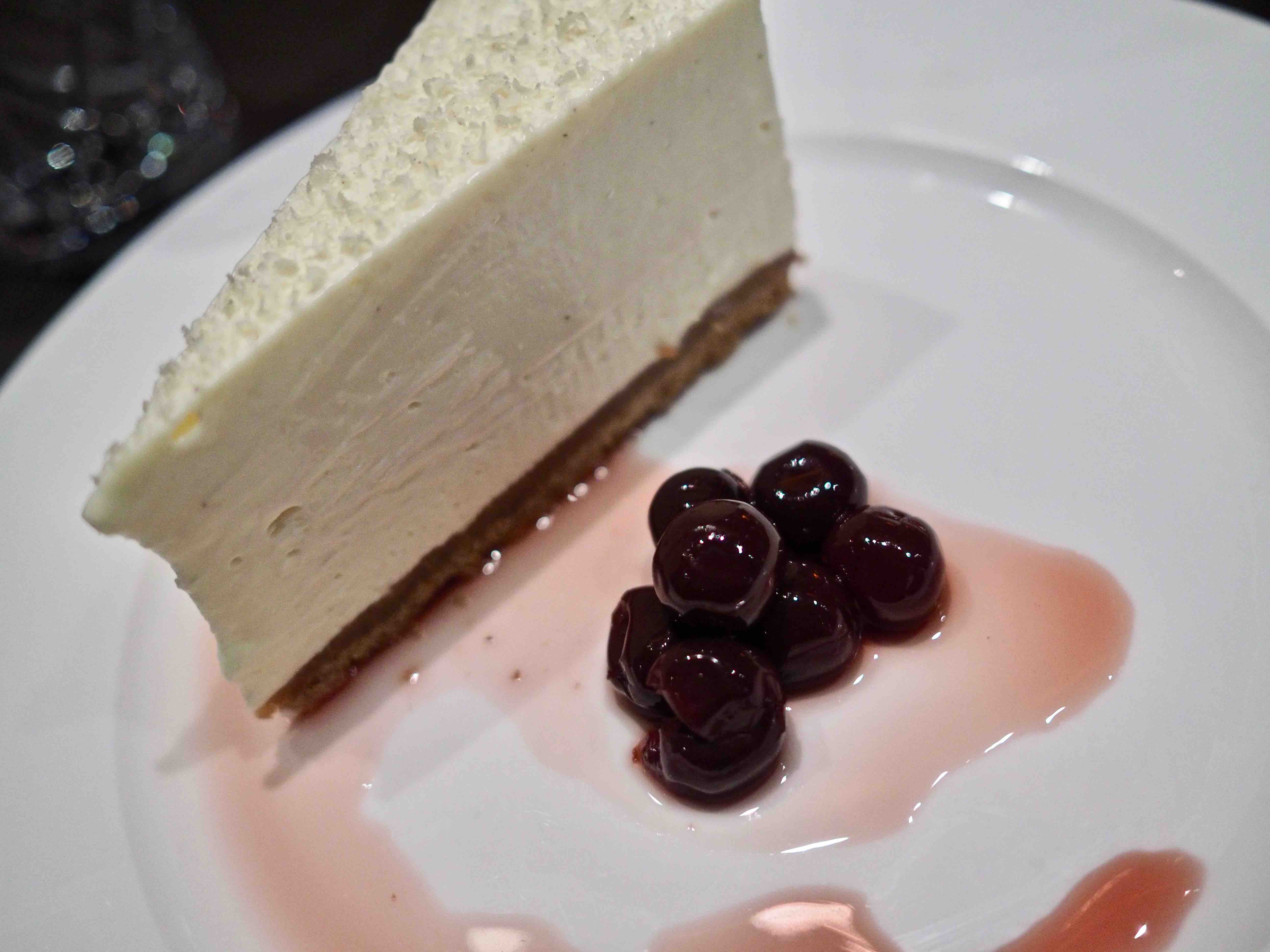 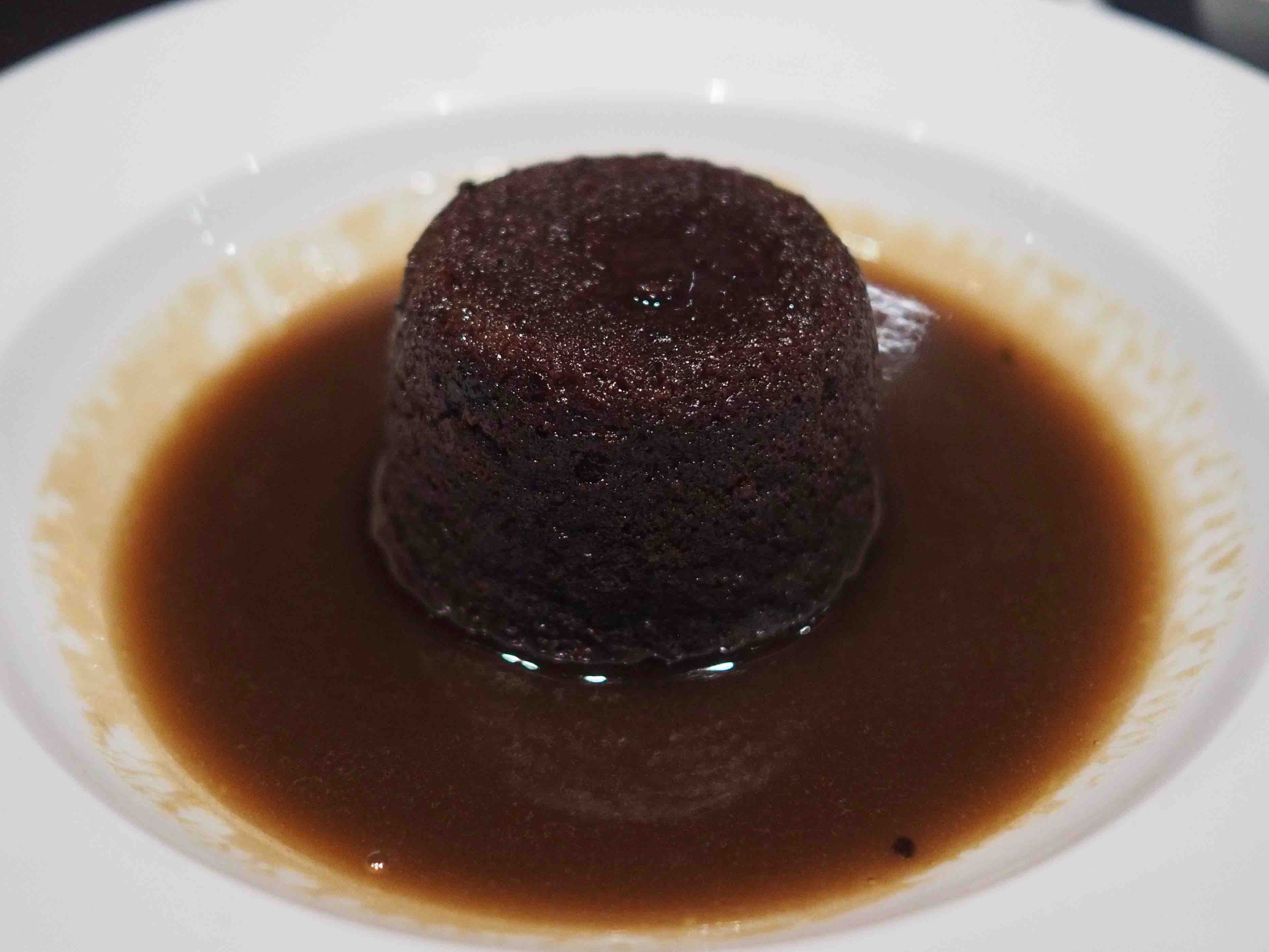 Puddings were also spot on; cheesecake with the right amount of give and a creamy texture, sticky toffee pudding that oozed sweetness as it drowned in a puddle of further sweetness, tick. Both were good but have an appetite when you visit, as the food here is big without being filled out with cheap ingredients. There’s a ‘shot’ list with desserts – try the brilliant Diplimatico Rum with anything. It’s the new rock and roll.

The pictures on the wall and it must be said the TV screen (on our night) The Thomas Crown Affair offer a slight if not pleasant distraction. It’s a super stylish film that fits in with the vibe completely. One of the pictures has Steve toting a handgun, which at first made me think was he a bit like Elvis and just liked shooting? Well no it appears not. Sharon Tate was a good friend and the night she was killed by Charles Manson he was due to be there. The police found a ‘hit list’ with his name on it. He carried a gun thereafter. 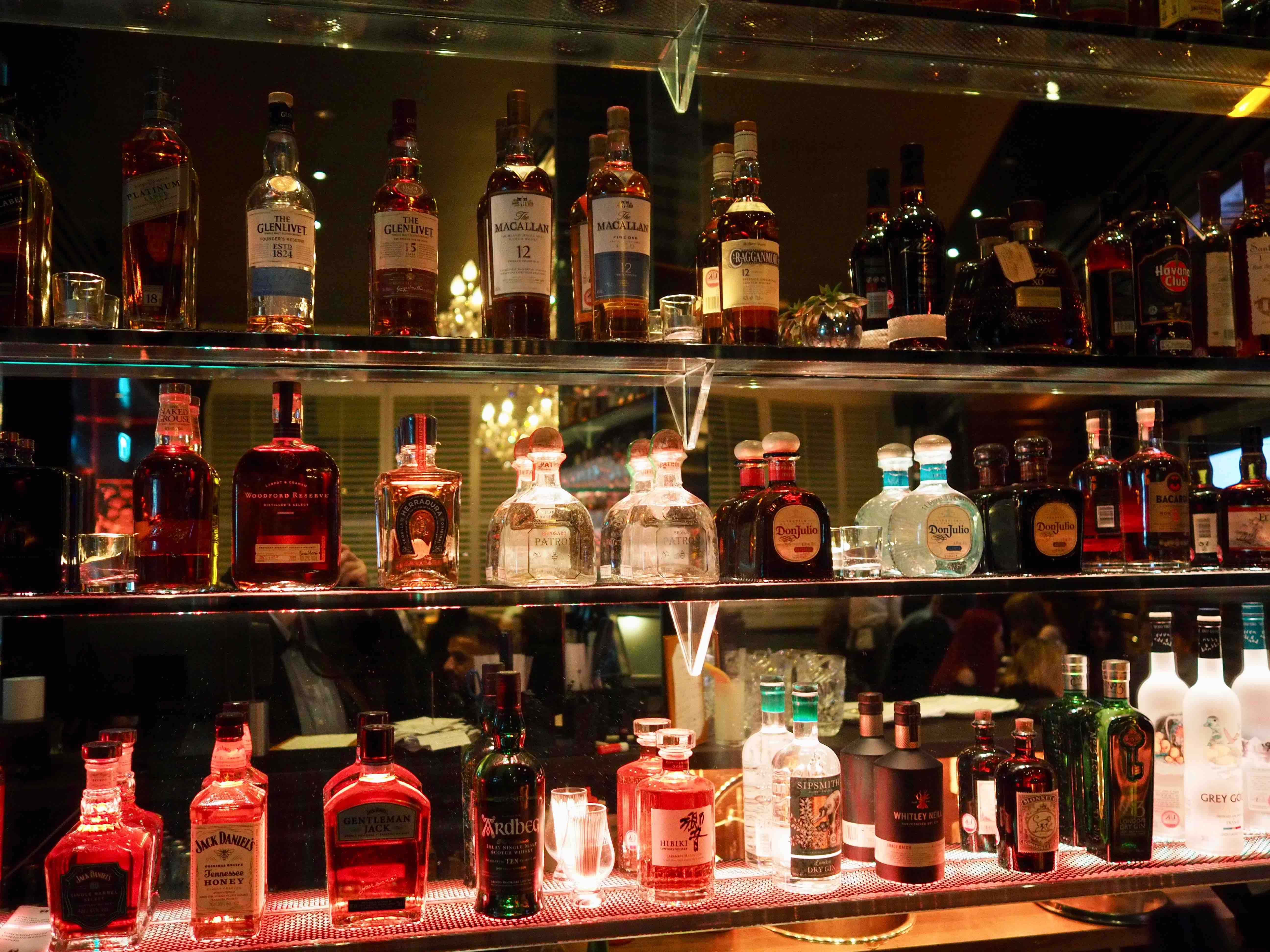 Although Shoreditch is still rough and yet to ‘up and come’ in some people’s eyes (except property prices, they have shot through the roof) I don’t think it necessary to take your own shooter to enjoy a night out, especially at McQueen Grill where you will be welcomed with a warm smile, superb food and a Grant Mitchell ambience. 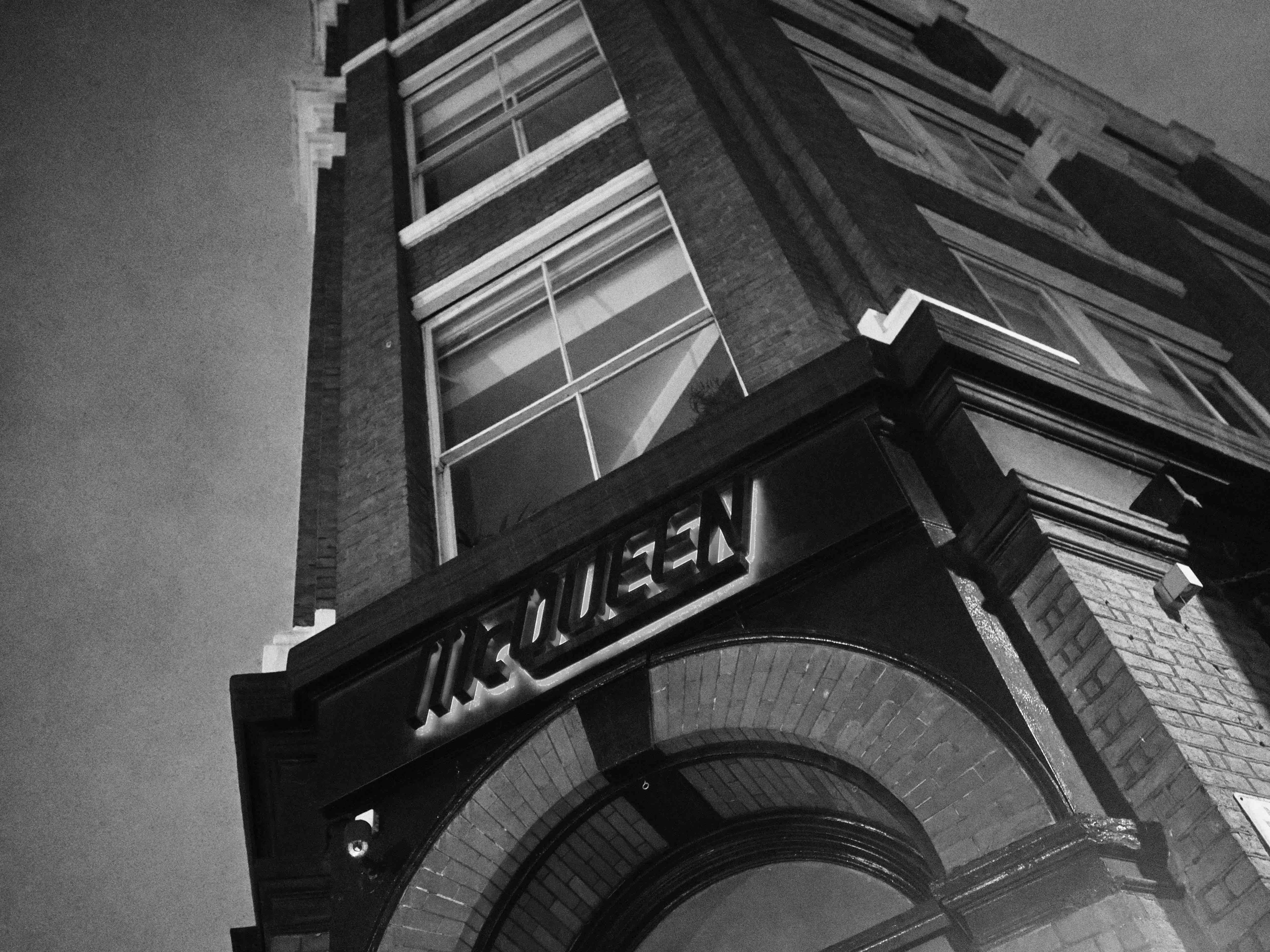 We serve all 50 states - apostille documents.