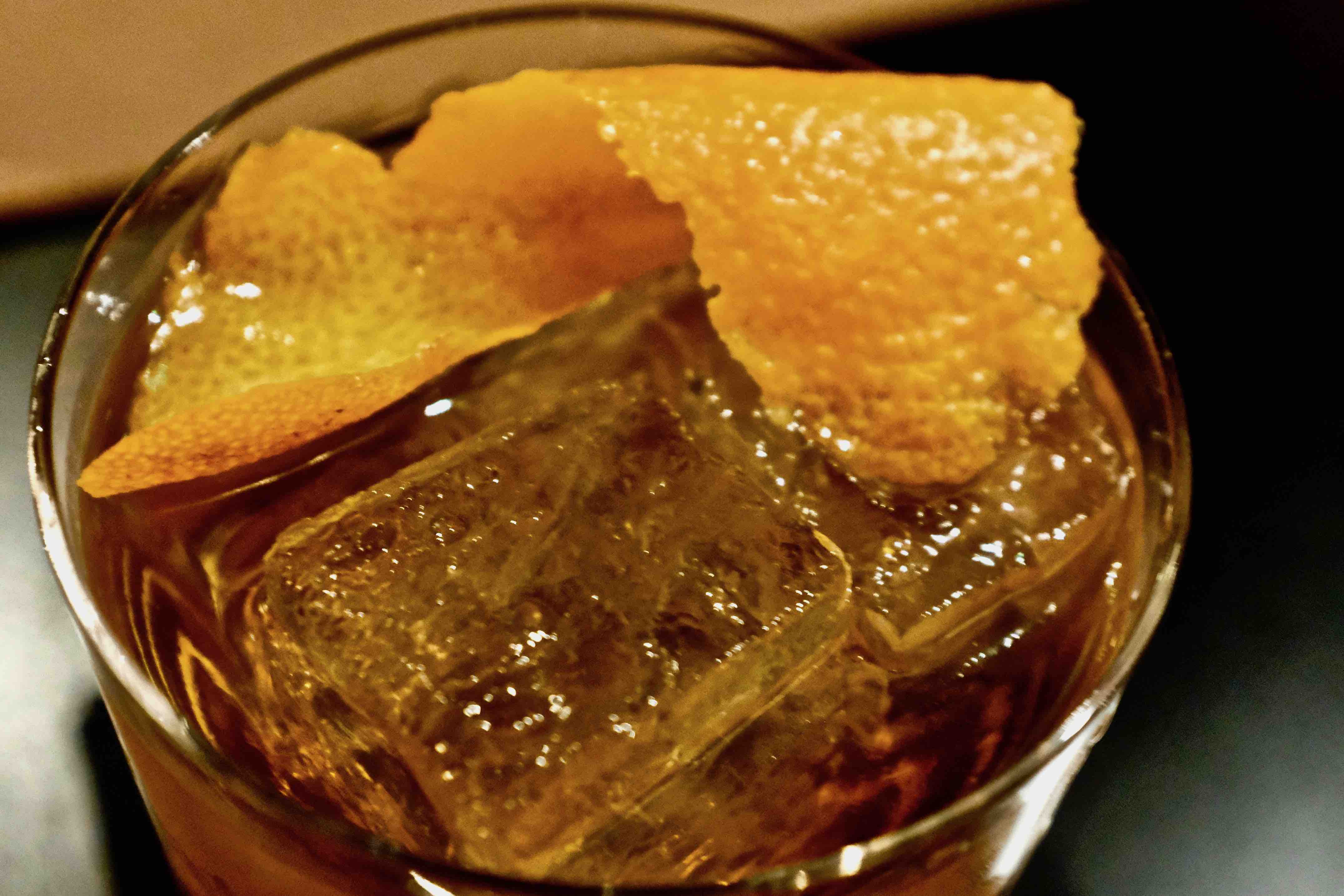 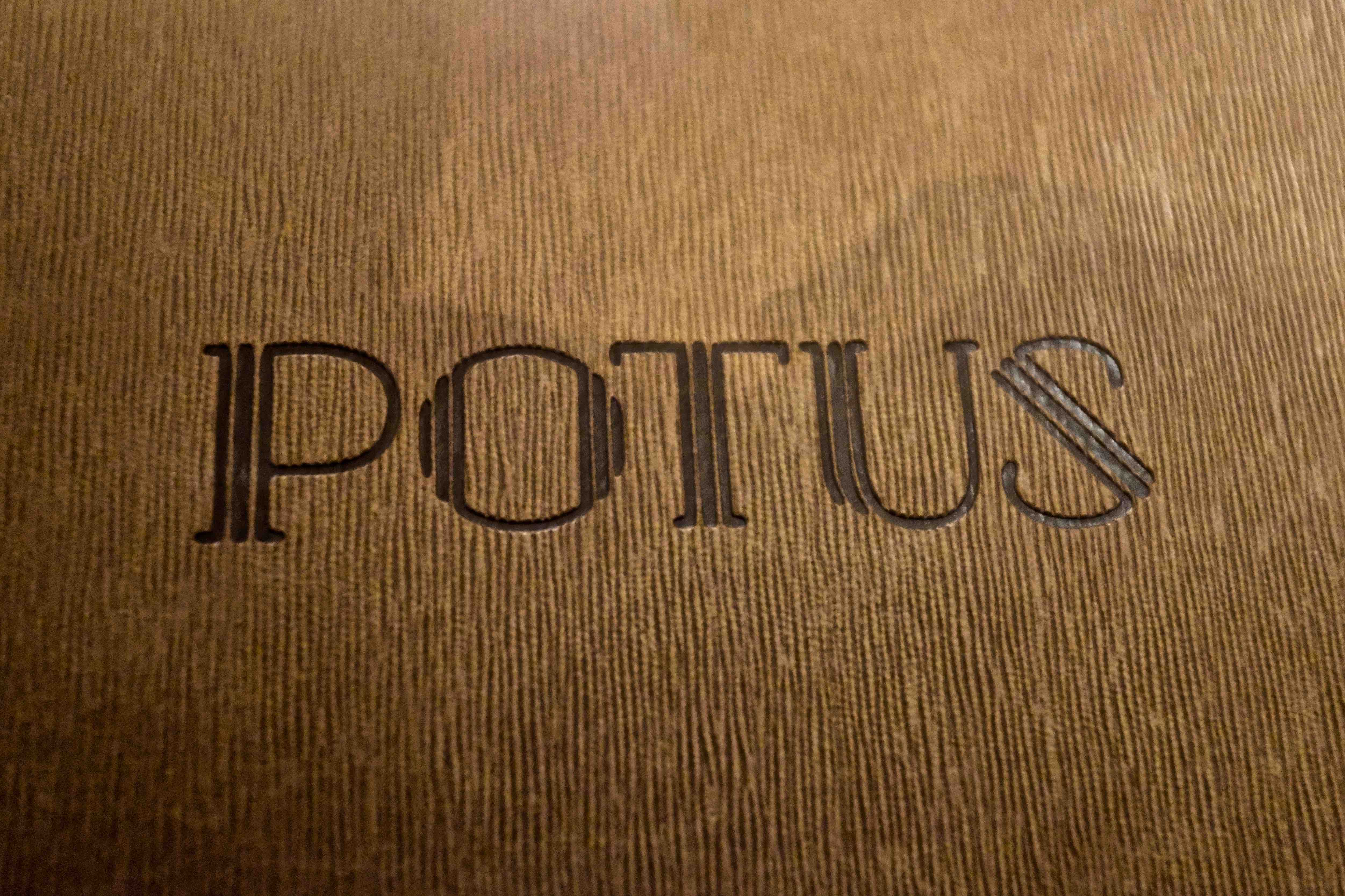 It might be considered foolhardy in these times of polarised political views to name a restaurant that generically pronounces a president’s importance.  But that is what’s happened, the acronym POTUS or more accurately POT (President of the) was first used in 1879 as an abbreviation for The President of the United States in The Phillips Codebookused by telegraph operators before telephones were invented.  It became ratified in 1926 to its full form that is used today in the White House and beyond. 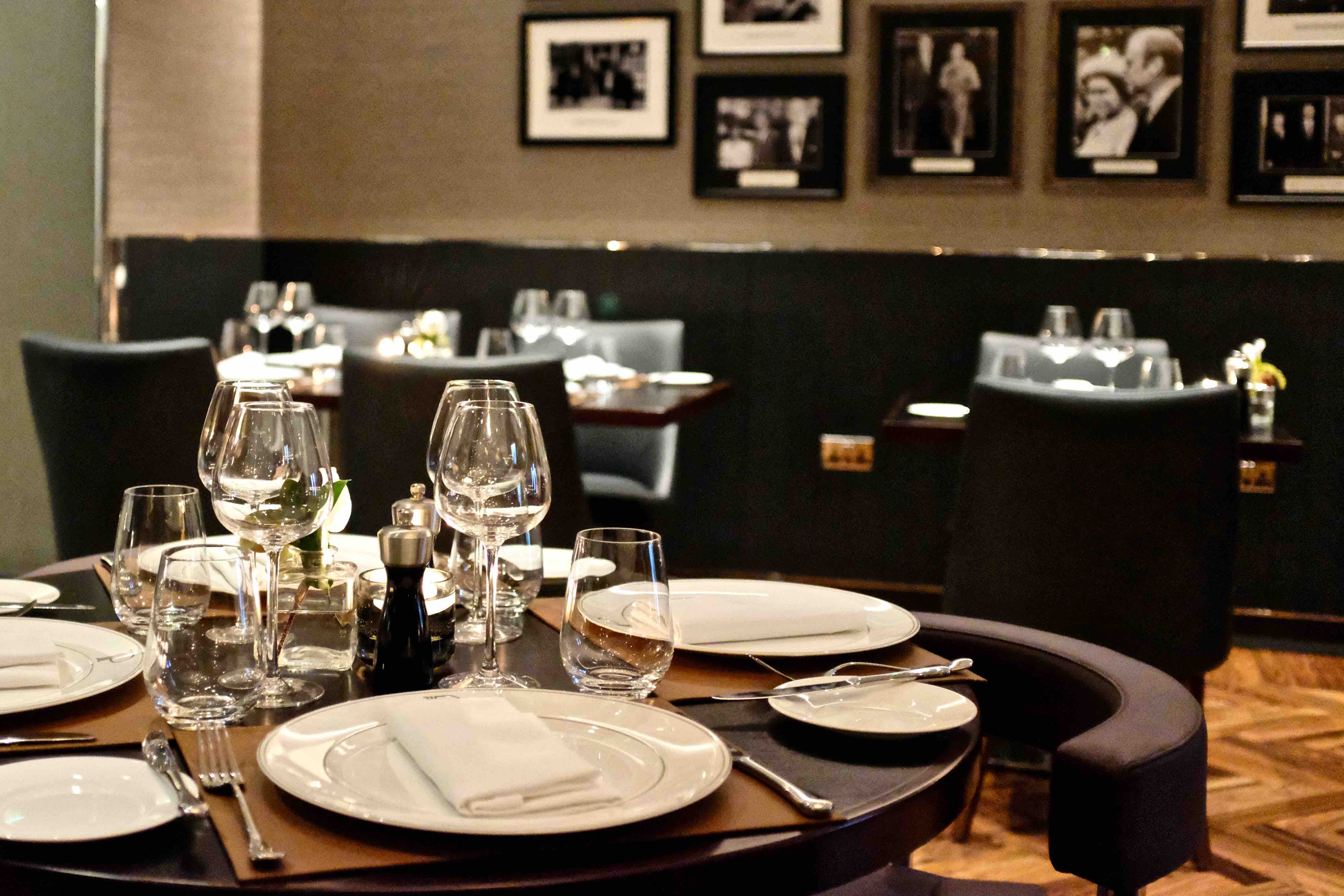 Sited in the luxury Crowne Plaza Hotel on the Albert Embankment given its name it is unsurprisingly an American inspired restaurant.  Arriving at the hotel we were guided left into a large bar, the sort you see in adverts where there’s jazz music playing, the lighting is all about the bottles and making you look good, the barman in shaking a cocktail and there are beautiful people shooting the breeze with their feet dangling from a barstool.  Well that’s exactly what it was like when we arrived. 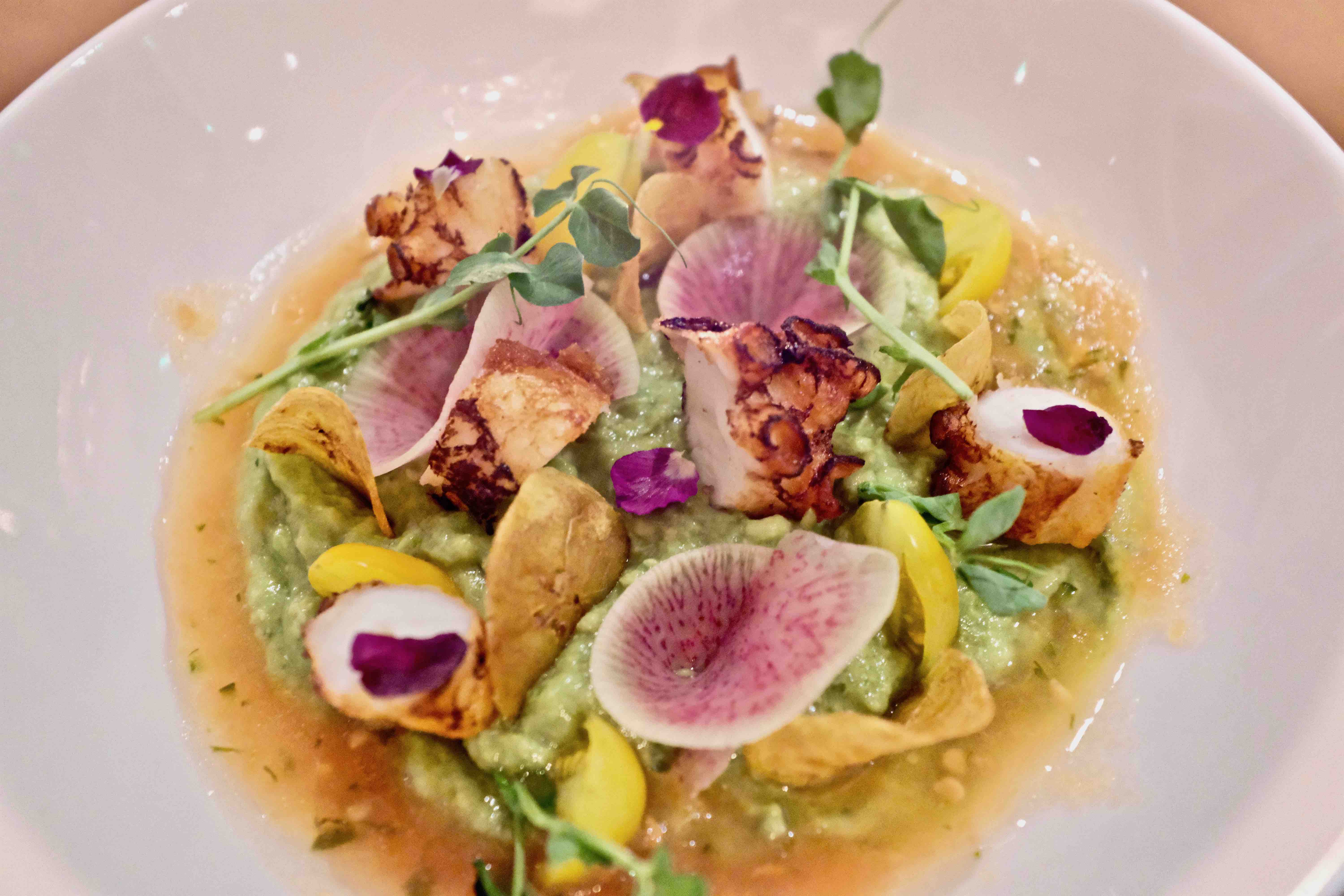 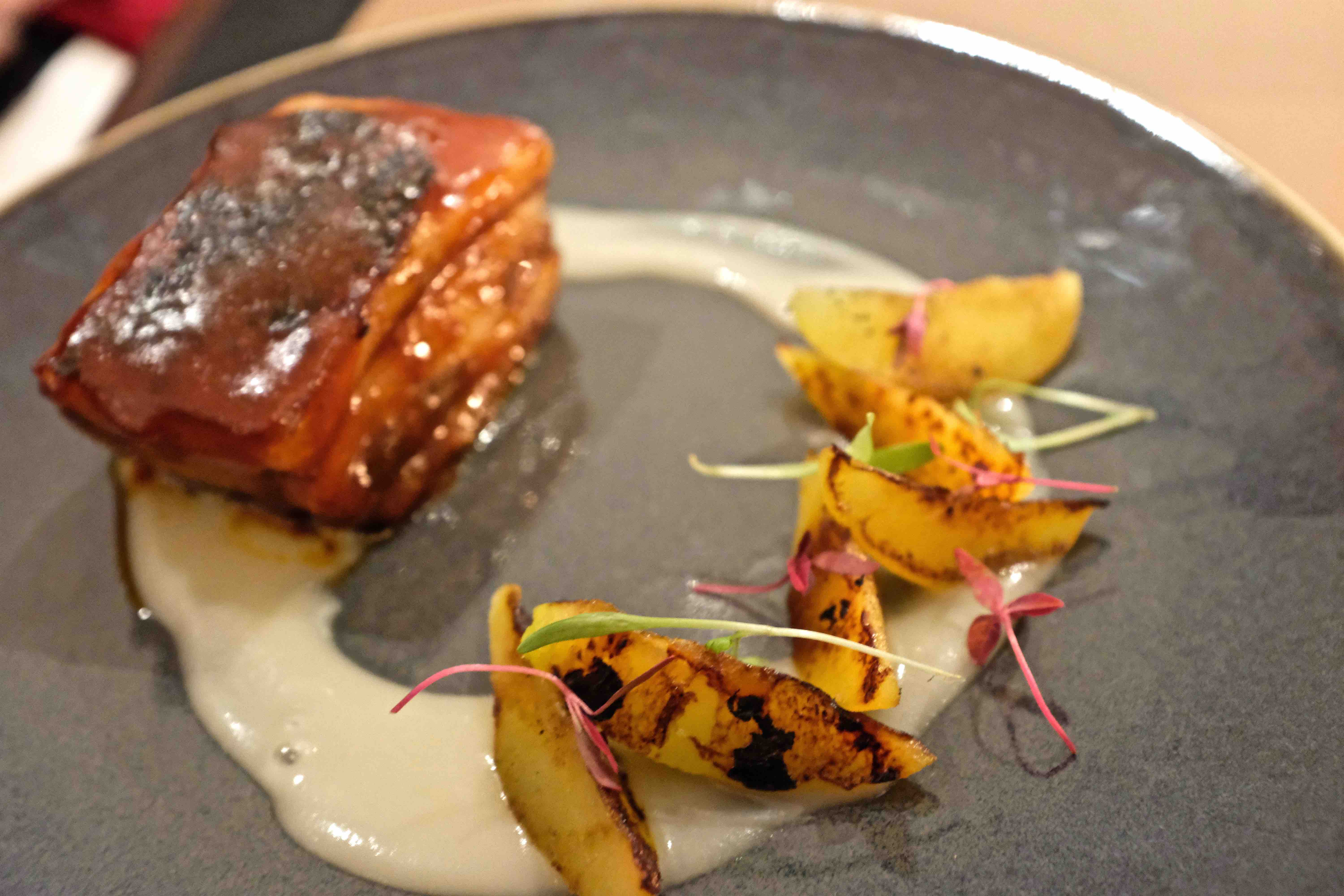 Ushered into the enclave on the right the smallish space with comfortable leather chairs and wall festooned with black and white prints of presidents and other dignitaries visiting the UK and low lighting it is a pleasant place to spend a few hours.  There was a 2m wide Deco looking fire flickering away as we took it all in.

The service was provided by Marius, our waiter he was friendly, informative and very helpful making us feel at home right away, something hotel restaurants often fail to do.  The menu is short (always a good sign in my view) the starters were divided up with four cold and three hot.  I opted for California octopus salad and M went for BBQ pork belly.

While we waited I asked for a drink from that enticing bar.  A perfect Old Fashioned arrived a few minutes later.  It’s not a complicated cocktail and like the mojito has become ubiquitous in recent years but it’s still hard to get a really good one, this was a really good one, not too sweet and plenty of orange peel.

My salad came with guacamole, radish and micro herbs.  It was a treat to looks at but hit the spot taste wise.  A good choice I thought … until M’s arrived.  Her BBQ pork belly with Bramley apple sauce and a bourbon caramalised apple was divine.  Warm, sticky and unctuous it was comfort food personified.  I had plate envy and we had barely started. 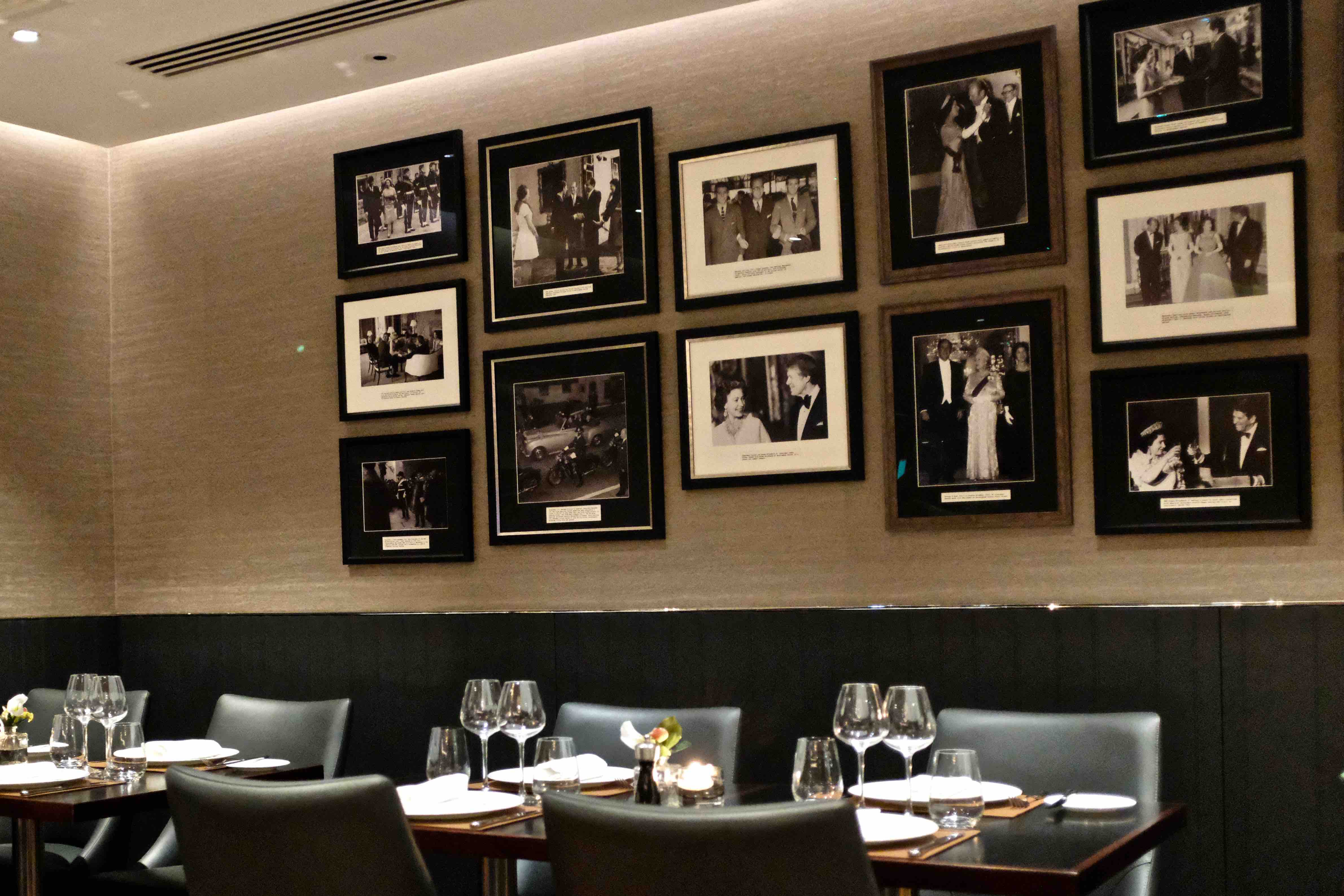 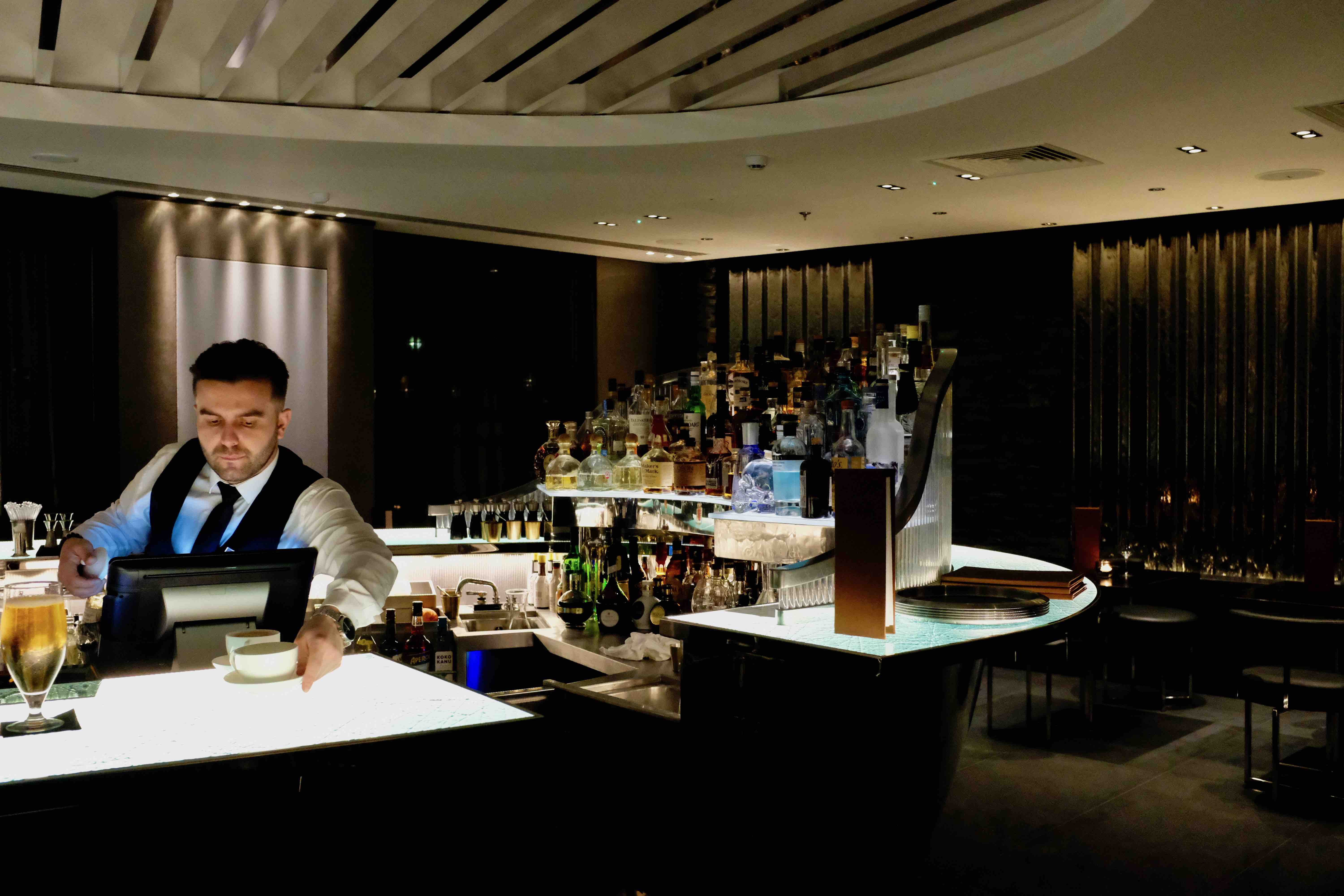 It had been a cold evening on the way to the restaurant and about half way along the embankment it started to rain heavily.  We had arrived soaked and looking a little like drowned rats.  The front of house that took our coats couldn’t have been more sympathetic and welcoming.  Short of being given a pair of slippers (now there’s an idea for a restaurant, Pipe and Slippers) it was very comforting to looked after. 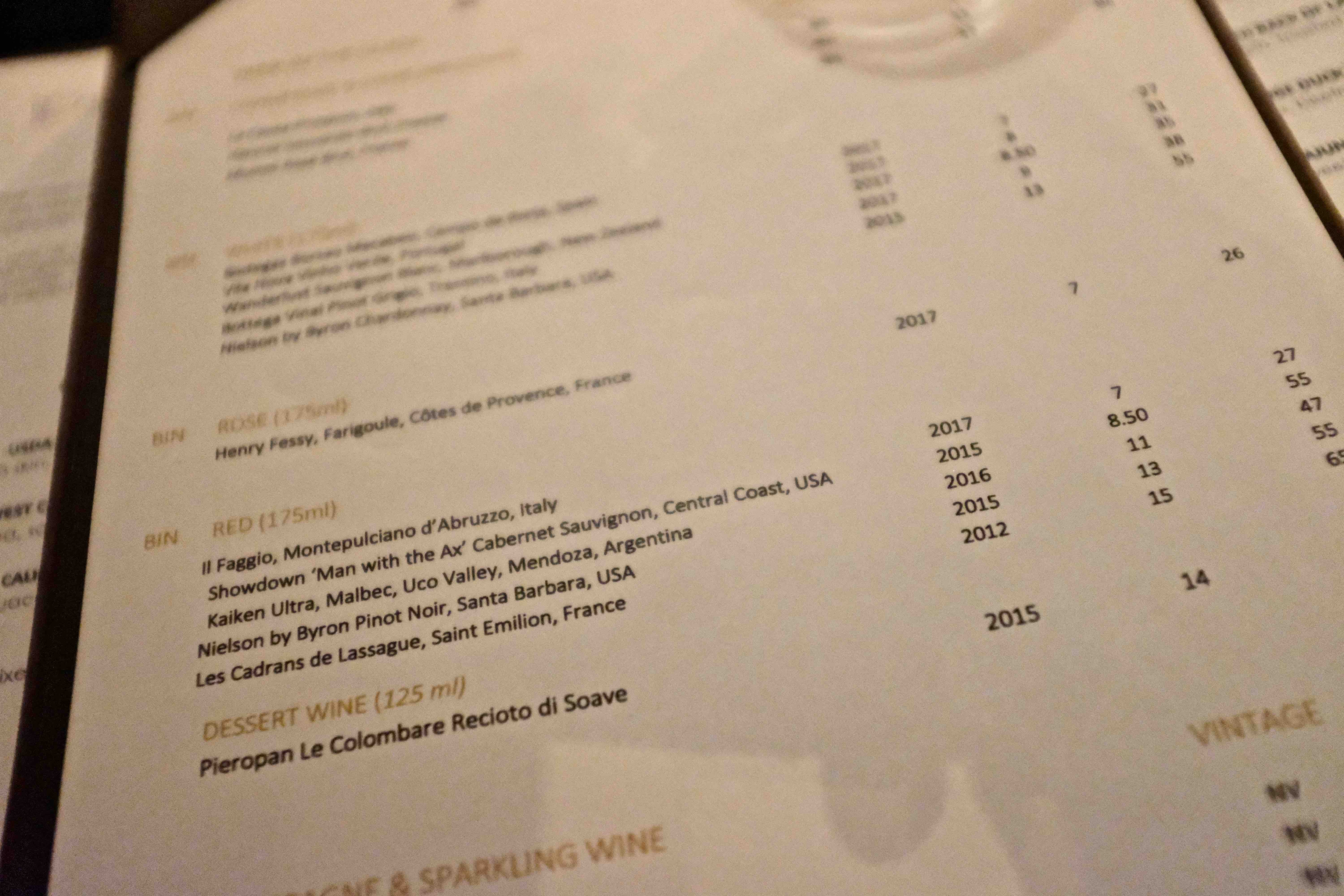 The main event and I mean main event was what they called a cowboy steak, 30oz of beef with chimichurri and countryside potatoes.  Now what must be borne in mind is that the restaurant is very new (two weeks I believe) and things take time to bed down.  We ordered medium rare and it wasn’t but you know what, every once in a while you have to give people a bit of slack and it didn’t matter.  The meat tasted wonderful, the countryside potatoes were to die for, a cross between a roast potato and chip.  A green and tomato salad kept the invisible Dr overlooking my shoulder at bay. 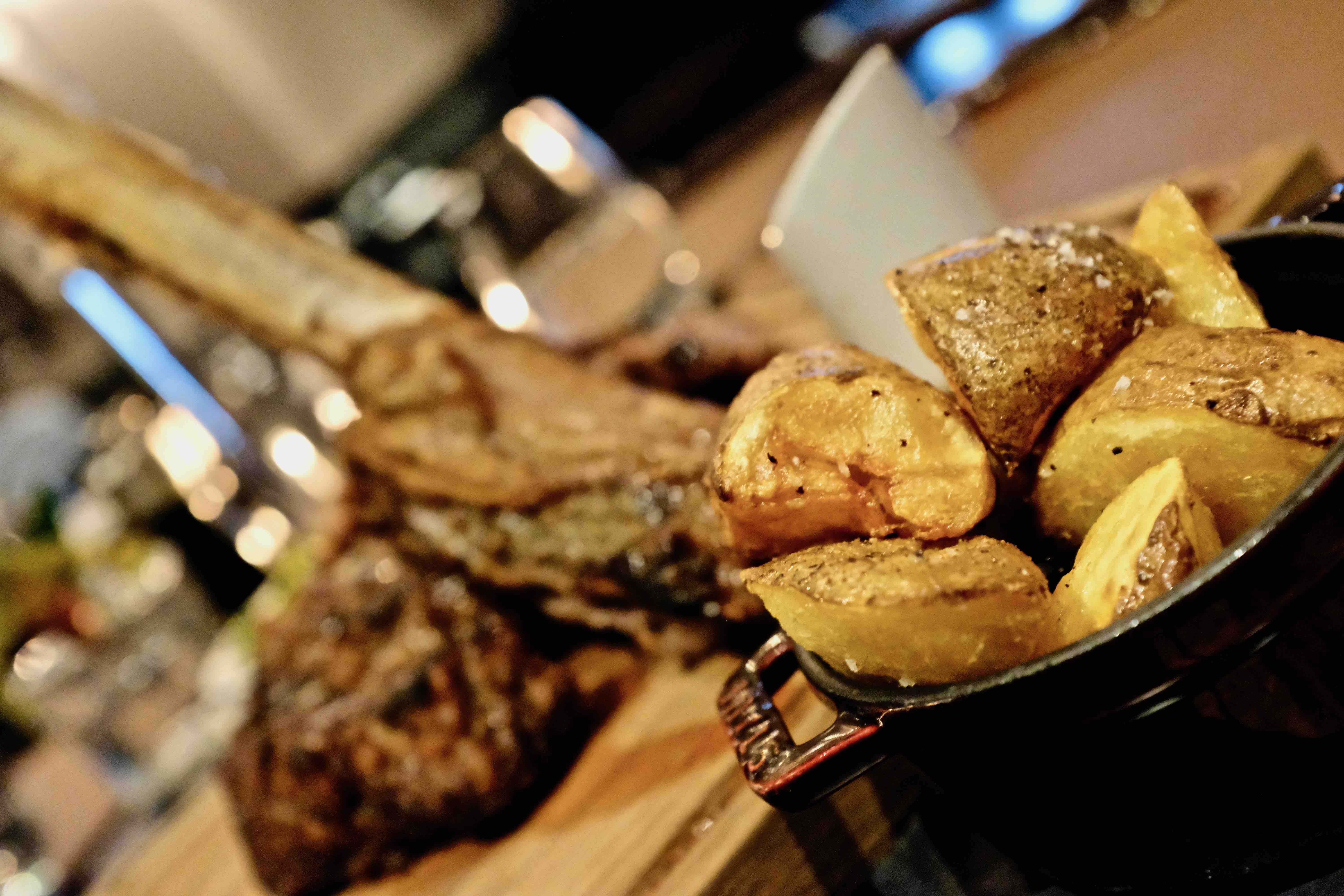 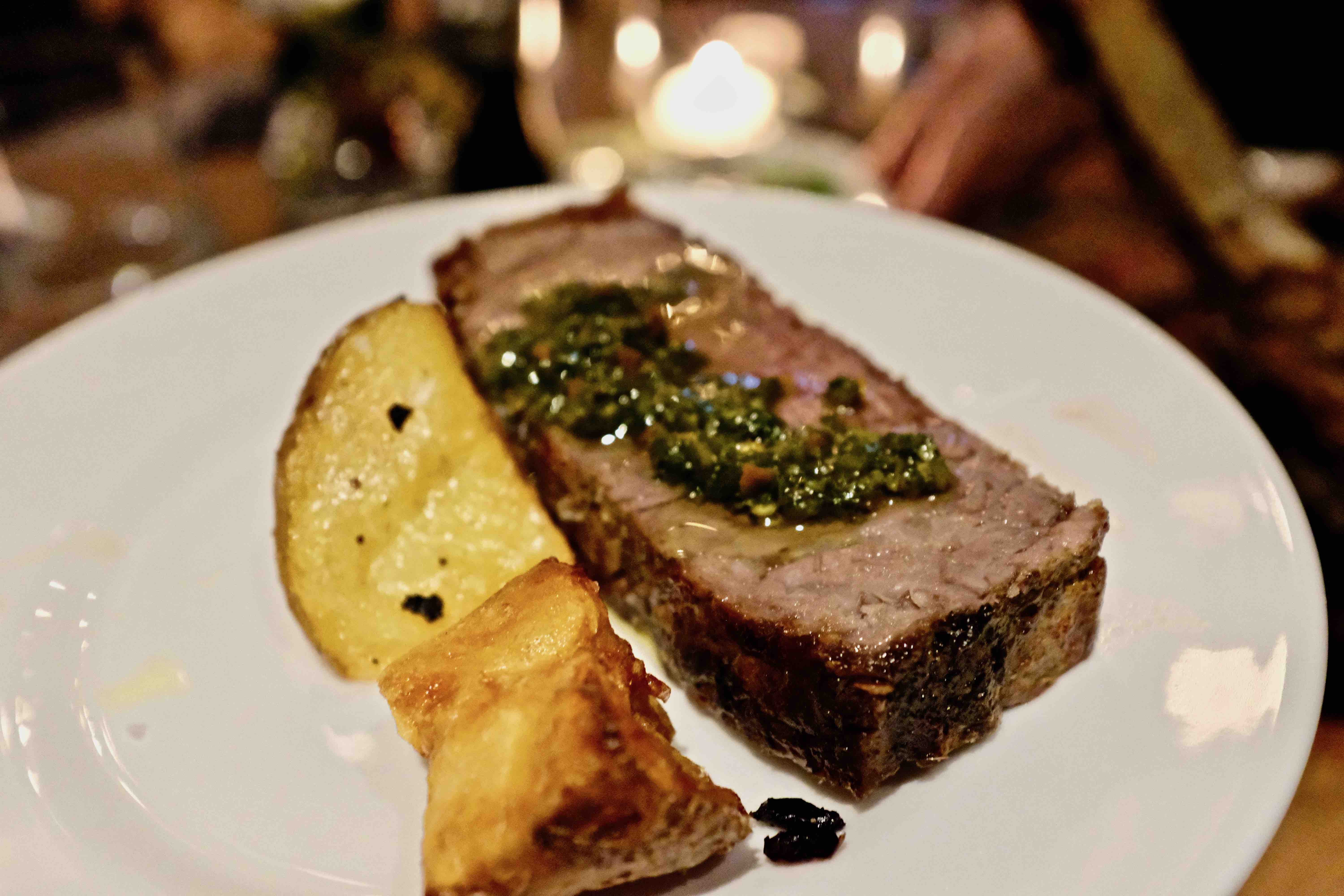 It was an epic amount of meat that we failed to completely eat but it was good.  The South American chimichurri sauce was perfect, a pleasing uncooked mixture of parsley, olive oil, garlic, oregano and wine vinegar. It found fame in Uruguay and Argentina and is a hit with anything cooked on a fire.

A rest was needed while we contemplated dessert.  The location we both felt was a lost gem of London.  The views (on non rainy days) of the river are great.  It’s easy to get to and not a crowded part of town. And I’d be happy just hanging in that über cool bar for a few hours bucking up enough courage to order a cowboy steak and hope that I could eat it all with a friend or two. 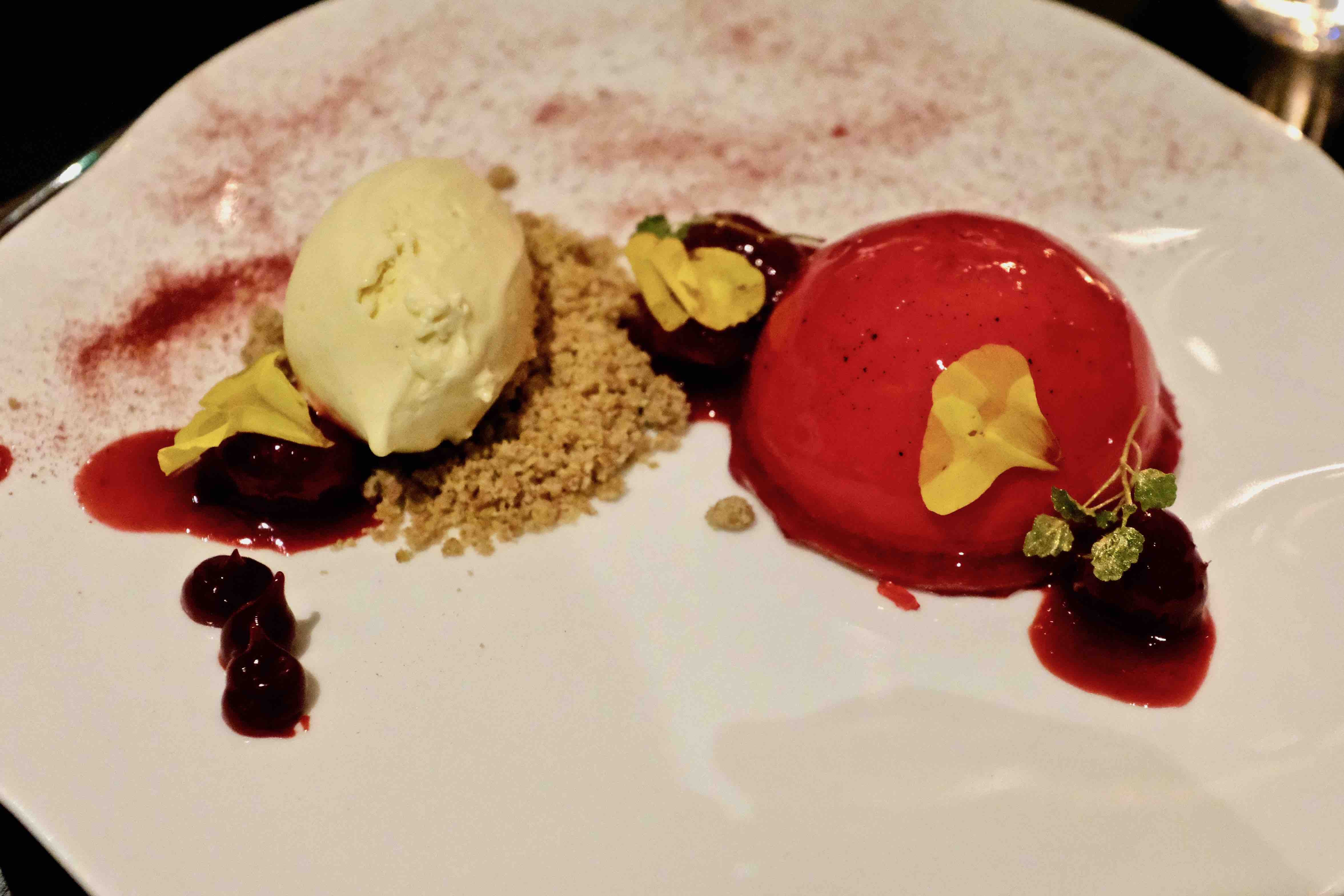 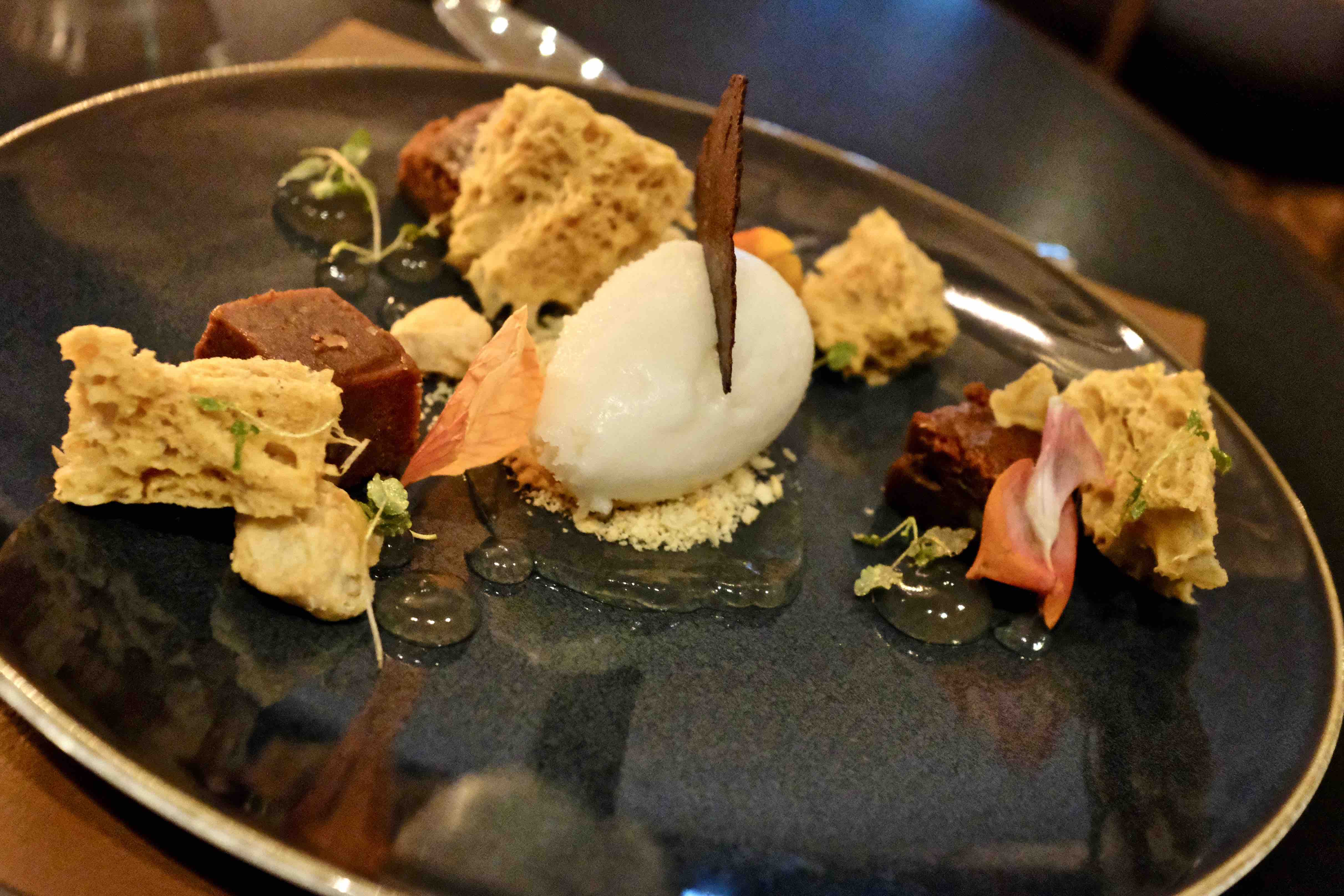 The desserts are a quartet of art. With only four to choose the Russian roulette factor was in play, would we be lucky and get a 100% hit rate? The odds were in our favour of course but we needn’t have worried too much.  The desserts proved slightly too much (no surprise after eating half a cow) but my New York baked cheesecake with fresh raspberries and eggnog ice cream was a winner, M’s Bourbon pecan brownie was good and the bourbon gel a particular winner but the plate was also populated with unnecessary clumps of something billed as praline pecan sponge.

Dining here we chatted about the name of the restaurant quite a bit.  Wondering if a president would come to eat here.  We concluded that a certain Donald Trump would enjoy all the dishes with America references (of which there a few) but struggle with the lack of cheeseburgers.  Note to chef don’t add any fast food anytime soon please.

right there . Click here For Details . Took From Here