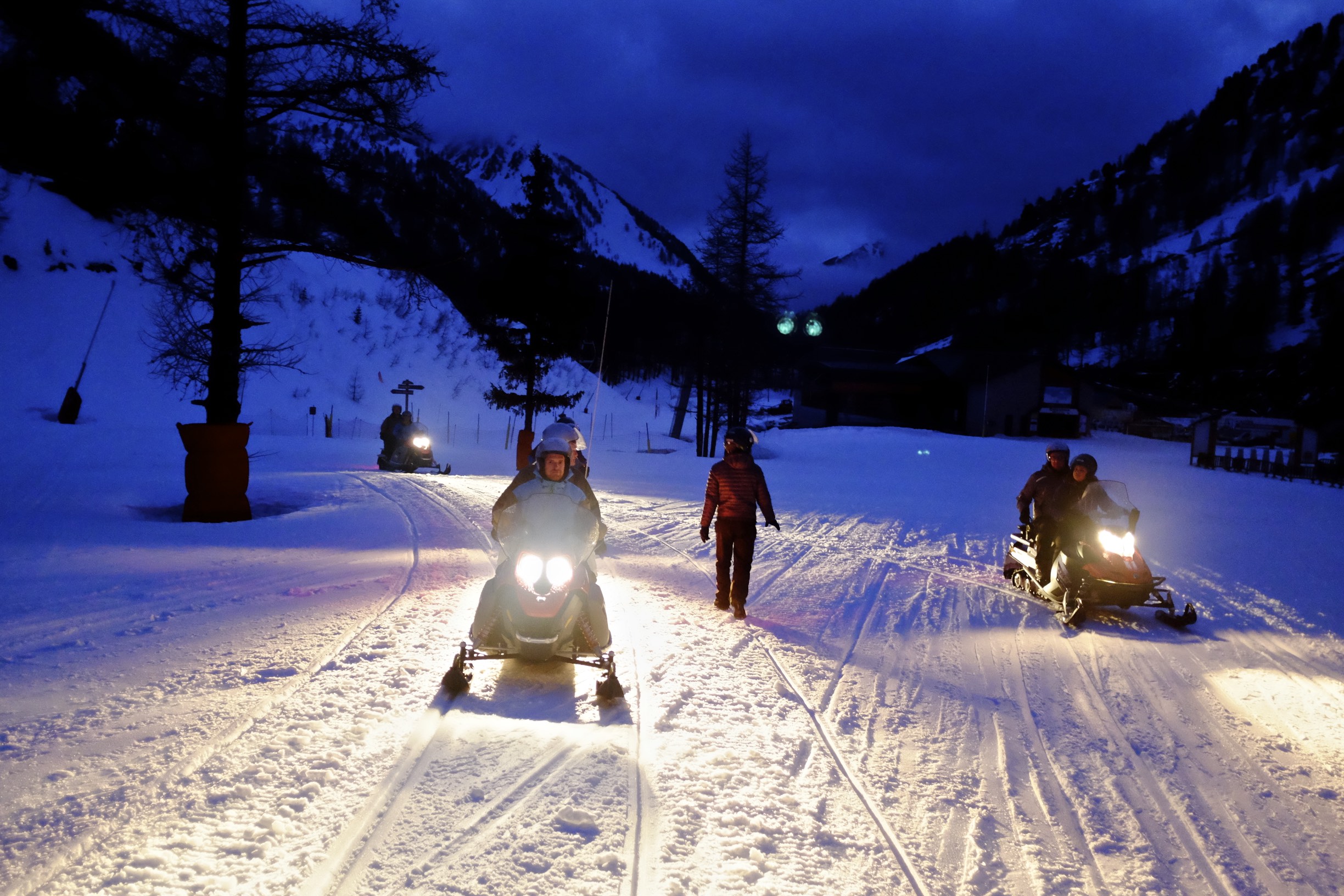 As incongruous as it sounds getting to the southern French Alps is best achieved by flying into Nice. The ninety-minute flight takes you to the land of yachts and the super rich with all those beautiful people to look. I was to discover more of this luxury later but first I went into the mountains. Just outside the airport (and I mean walking with your suitcase distance) I picked up the No 750 bus. For the grand total of €8 I was given a return ticket to Isola2000, my ski resort of choice just near the Italian border. 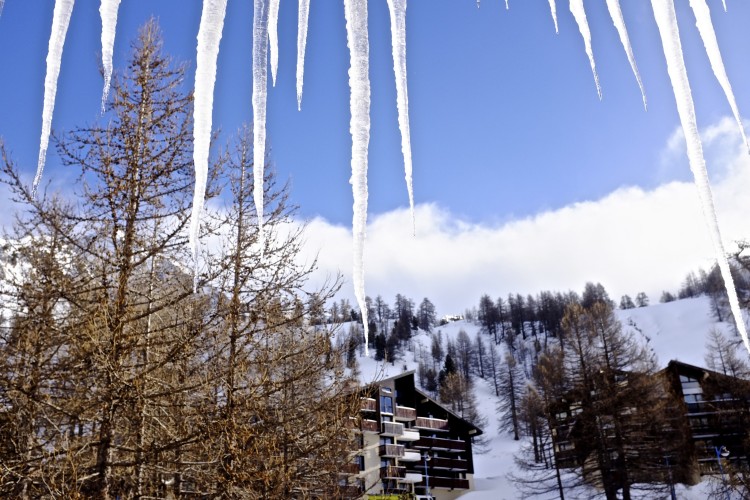 A couple of hours later I was installed in a lovely Terrasses d’Azure apartment with a bedroom, large lounge/kitchen and bathroom facilities, it would sleep four comfortably. These are well equipped with all the home comforts a family would expect, TV, board games, books etc. They also have high chairs, cots and bed safety rails should you need them.             The views even at night (the moon was high) were spectacular, the perfect base for a few days skiing. Of course I’m not a skier, I’d been once, for a morning earlier in the year. But I was determined to try again, and again I really wanted to crack this secret code, a sport that has lured so many again and again. 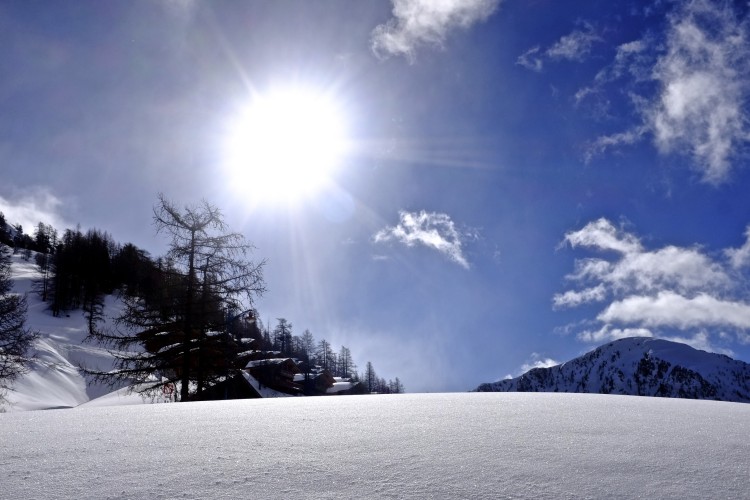 At supper I met up with some hardened skiers and snowboarders. They talked of escapades of previous seasons, near scrapes and broken bones (well, not many of those to be truthful). I listened with growing intent as they talked of the ‘feeling’, that moment when it all comes together, the moment that all the pain makes it worthwhile. The easiest way I can describe to anyone who hasn’t tried skiing is that it’s like learning to drive. At first it seems impossible. Can you remember when you first sat in the driving seat with the keys? The simple action of starting a car without stalling it (I’m showing my age now) and changing gear without the horror of grinding that always accompanies a capital red L on a white background. 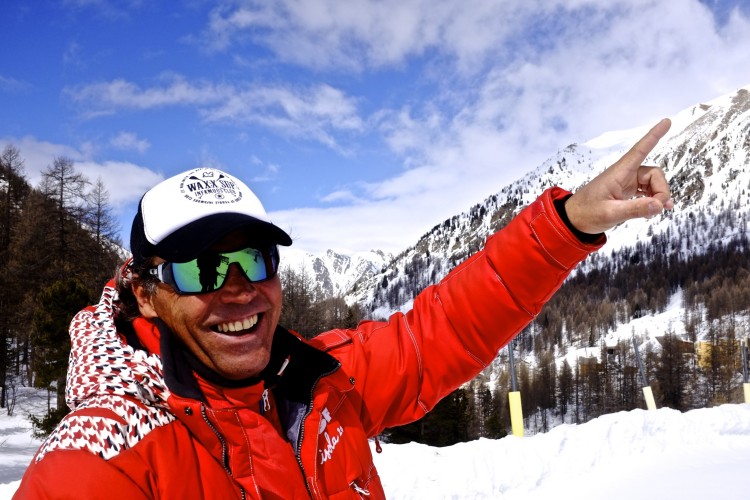 The meal was splendid, a raft of traditional Alpine fare with cheese firmly in first place. I was careful not to eat too much as I needed all the sleep I could get. Tomorrow I had a morning long ski lesson. I went to sleep dreaming of the ‘feeling’ and wondered if it would ever reach me? My last trip had been short yes, but I had tasted enough to want to return despite those bruises and bumps that are part of ‘learning to drive’ on snow. 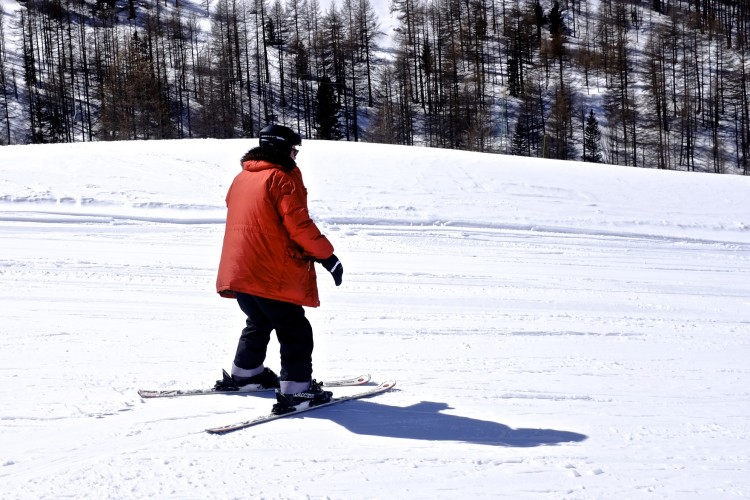 With a breakfast of croissant and jam and a glass of juice I felt as ready as I would ever be. A short ride on a vehicular railway down to the slopes later and the hire shop was the first port of call. I had my own helmet but needed boots and skis. The boots were a painful process to get on but it’s surprising how used to them you become. 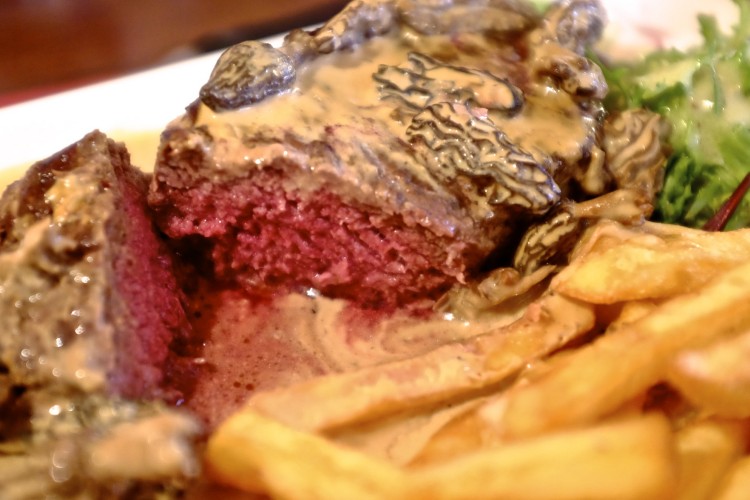 My instructor, Jerome was great. He had me skiing in no time, I say skiing I mean moving very slowly on fresh powdery snow that had fallen the night before. Perfect to learn on. First you have to master the plough, and inverted V, which will stop you quickly. Then it was on to a gentle slope to learn the zigzagging, which will take you down a slope safely. 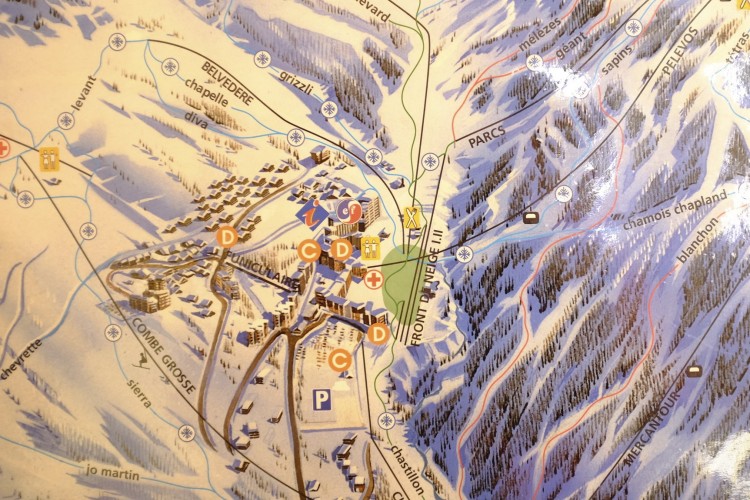 Like driving it’s hard to put it all into practice on day one. Remembering which leg to give dominance to, the weight distribution and the small matter of staying upright were all a bit beyond me. The ‘feeling’ hadn’t quite happened yet! Jerome kept my strength up by dispensing sweets every so often. A vital sugar boost, if you have never skied before it’s hard to grasp how utterly exhausting it is. You use muscles in your legs that you never knew were there, so it’s best to take it easy and not over reach yourself on day one! 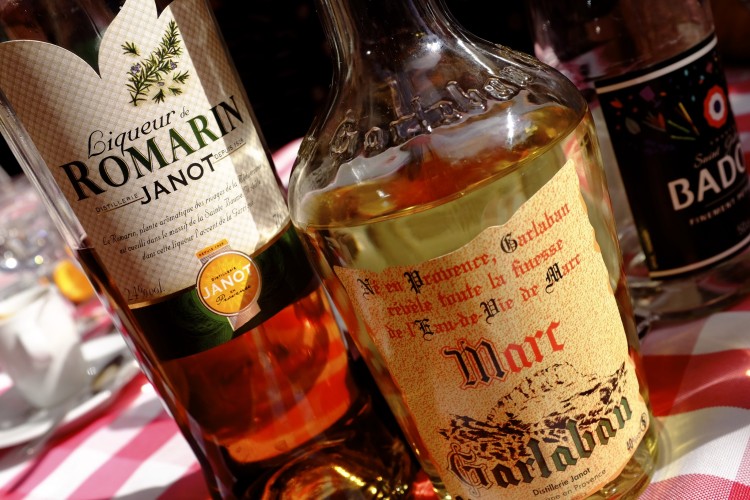 After two hours with Jerome which costs €90 for up to two people I felt a lot more relaxed (a key component to learning I discovered) and a bit more confident but exhausted. I started to fall over with a regularity that told me it was time to stop. It’s dangerous to continue when tired as you could have a nasty fall so I stopped. 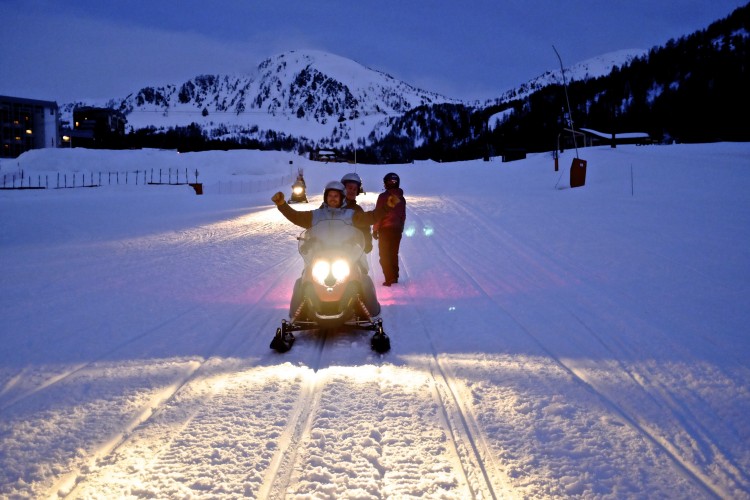 The evening brought more adventure on snow but this time it was motorised! Snowmobiling is fun, fun, fun! A group of us were taken up the mountain at dusk (you were allowed to drive if you wished). They seated two and boy did they shift. With skis at the front and caterpillar tracks at the back they made light work of the snow. Up and up we went, in half an hour we reached Le Valette. 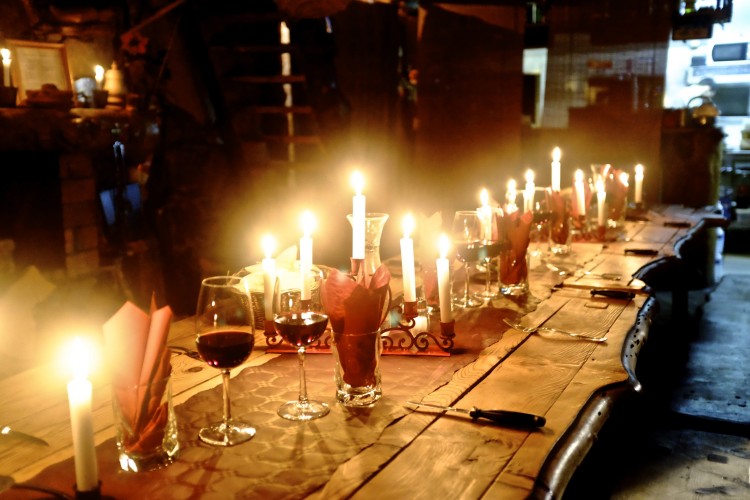 Only accessible by skiers in the day and ski-dos at night it was an enchanting experience. Greeted with a glass of something fizzy we all went inside the chalet to a large room with a roaring log fire and a long wooden candlelit table. It looked like a film set where you expected the Milk Tray man to pop in and leave a box of chocolates for a mysterious lady. 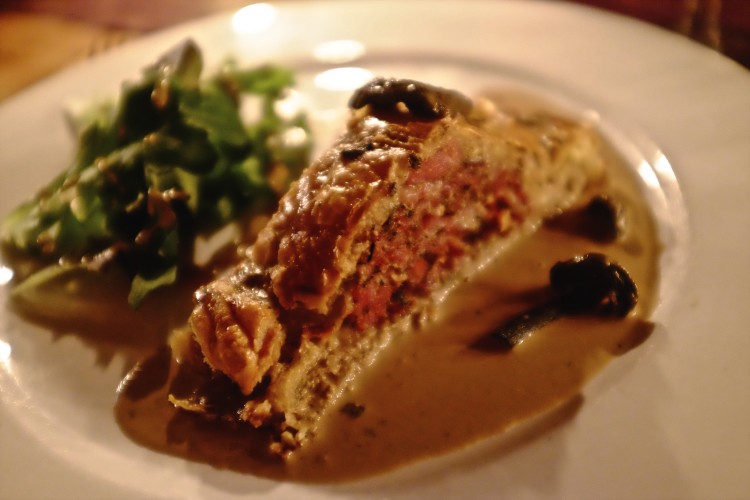 We needn’t have worried about food the restaurant served us a superb four-course meal with a few extras thrown in like a strange coffee/liquor which is presented in a large bowl with eight spouts for each of the guests to drink from. My favourite course was probably the French take on beef wellington. We also had baked Camembert with crusty bread and blackened chicken with a divine lemon sauce. All washed down with some tiptop wine. A half hour trip each way and the meal including wine came in at €110. 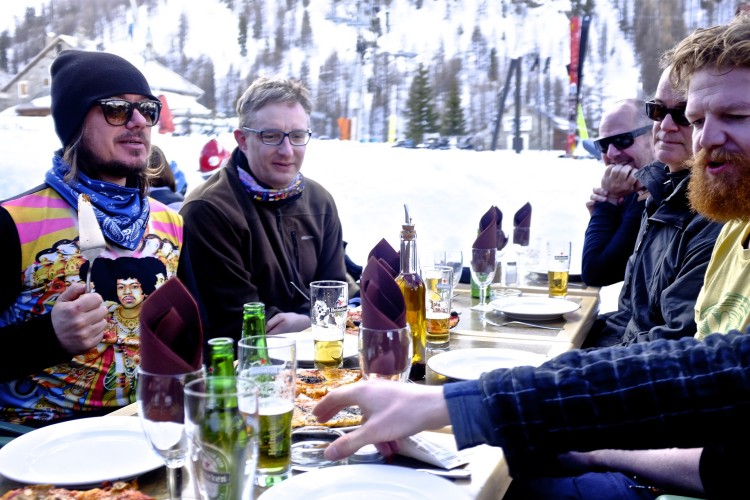 I had decided beforehand that was not going to be driving after the meal so I was able to enjoy a few glasses of wine. I can remember the journey being much faster, more fun and very exciting and in total darkness save the headlights on the snowmobile. I’m glad I wasn’t in charge but I am really pleased I did it! 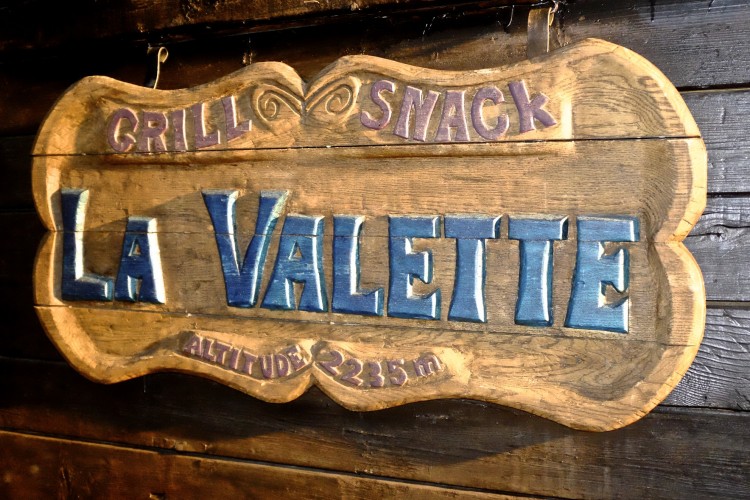 After a sound night’s sleep it was back to the slopes again, this time over to the other side of the valley and the resort of Auron. Overnight the snow had frozen a bit and my first (inevitable fall of the morning) was rather painful. Gone were the forgiving soft powdery slopes of the day before. The resort is 1600m above sea level, slightly lower than Isola but with more ski runs (135km in total) 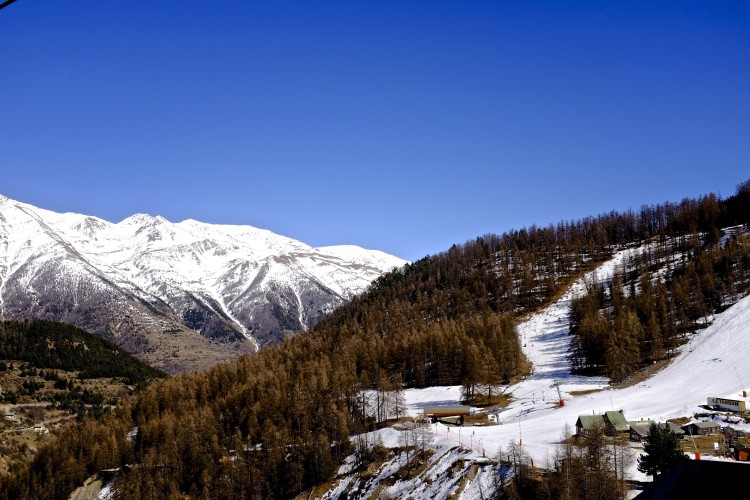 The morning went even better than before bumps aside. I managed to complete my first green run three times (the first and easiest of the colours) without falling over once. My initial fall did shake me a bit but I’m so pleased I had continued as I started to get the ‘feeling’. OK I’m not a champion (yet!) but I felt that over those two days I had moved forward a considerable way. I can see myself coming back, hopefully improving and trying new resorts and achieving less bruises. 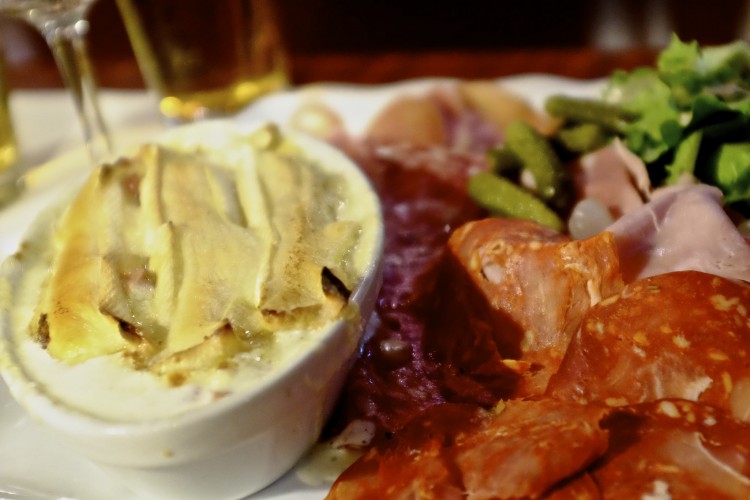 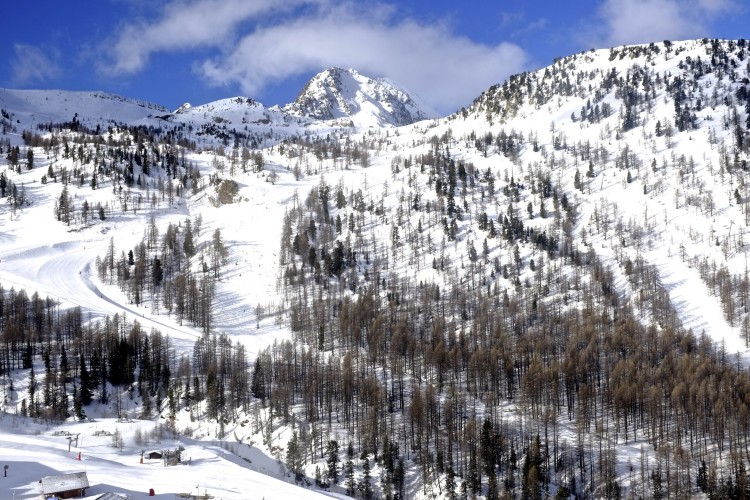 That night was all about me joining in the ski talk, about this moment or that fall, I started to feel a genuine part of this mysterious sport. A wonderful meal with some of the party enjoying that Alpine classic Raclette, the semi-firm cow’s milk cheese that is melted with an electric element onto a tray that you take the hot molten cheese from and eat with pickle, meat and potatoes.

The two-hour journey back to Nice flew by as I sat next to the window and watched the snow ebb away as we descended down to sea level. The resorts all have summer programmes as well including horse riding, trekking and even golf! I made a mental note to return in a warmer season to visit this magical place again. The bus sped on and the sun started to shine, Nice did what it does best – looked fabulous with the light catching the sea and chrome of those yachts! 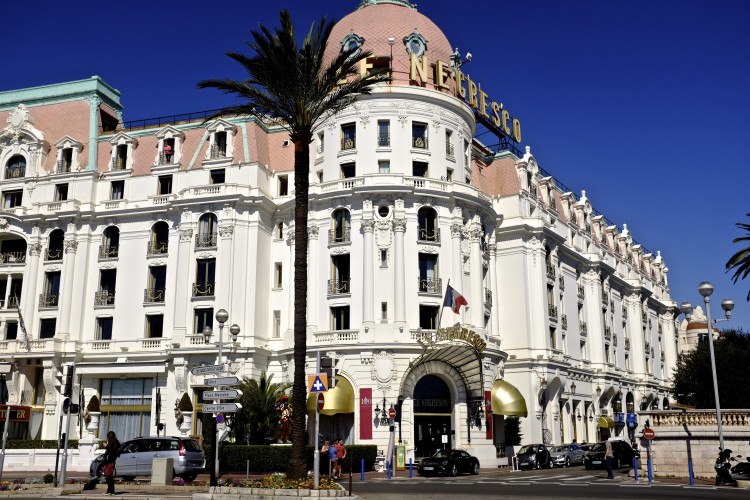 After checking into Adagio Access Nice Magnan, a nifty studio apartment with its own kitchen and bathroom situated right in the centre of town. A walk along the promenade is essential to soak up the French atmosphere and the food that has more than a touch of Italy about it. The fruit and vegetable market is a sight to behold. The stallholders lay out their produce with such care and attention. It makes shopping a joy. Henry Mattise’s old house looks directly onto the market that hasn’t changed since his time there. It’s a large ochre coloured building, he lived on the third floor where his view must have inspired him. 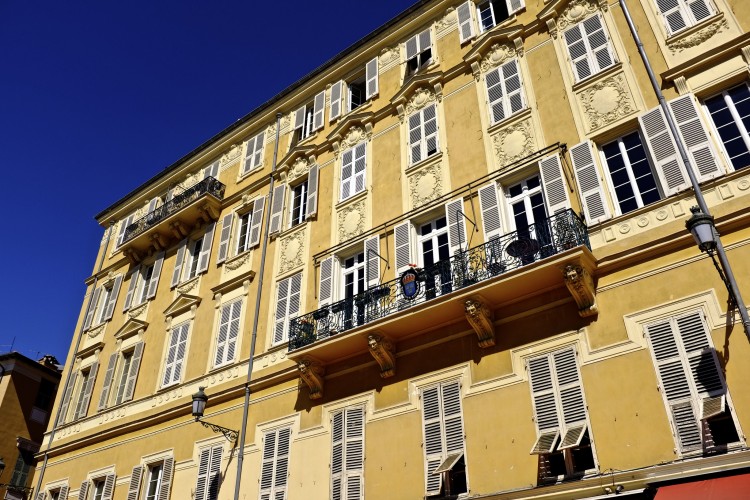 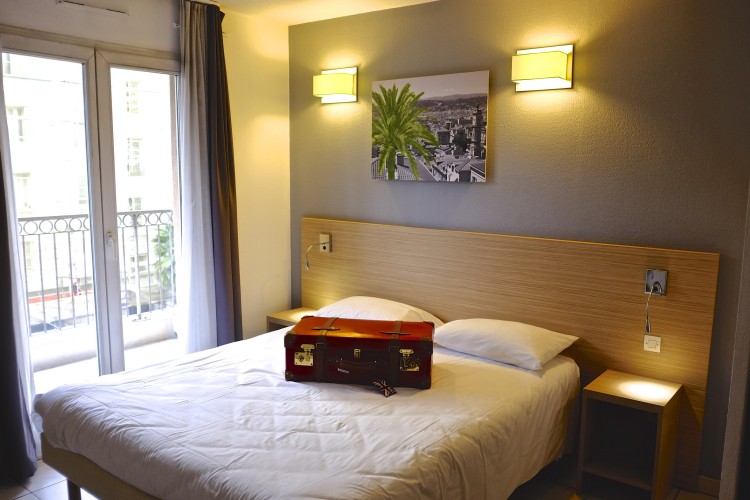 High above the town is Castle Hill affording superb views across the bay and over the old town and port of Nice. On this sunny day it was full of families picnicking and playing. Lunch was at a niçois restaurant, L’Escalinada, French but heavily Italian influenced. I sat outside enjoying the sun and chilled Rosé. The food was very good and the service charming. It was hard to believe that just a couple of hours ago I was packing up my skiing gear and bussing down the mountain. 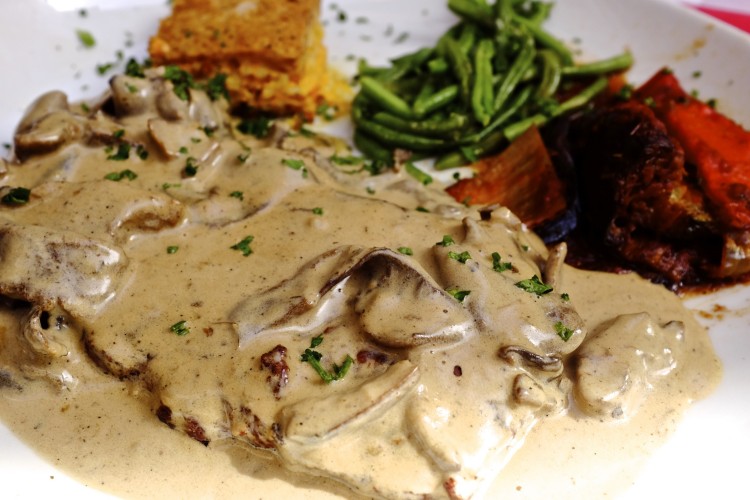 The after lunch walk around the twisting lanes that make up the Place Garibaldi area was worth losing a couple hours for. Book markets and interesting boutiques and little bars are the order of the day. Just watching locals going about their business is always fascinating, the elderly couple clutching a brace of baton for dinner and a bottle of wine with fresh fruit in another’s basket. I could be a fly on the wall all day. 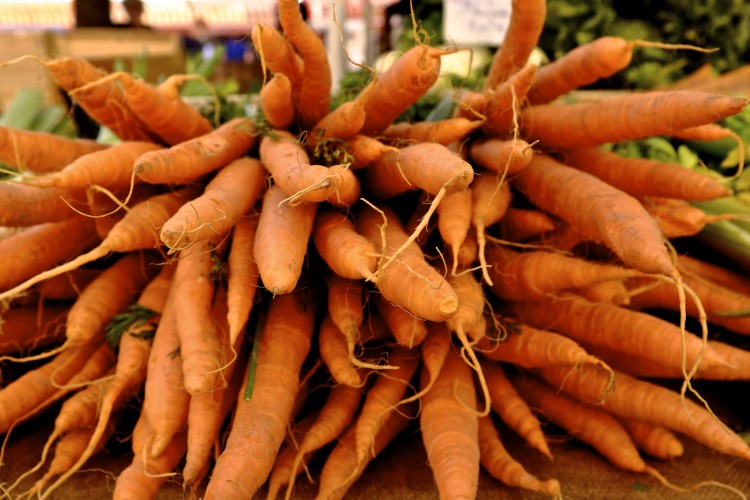 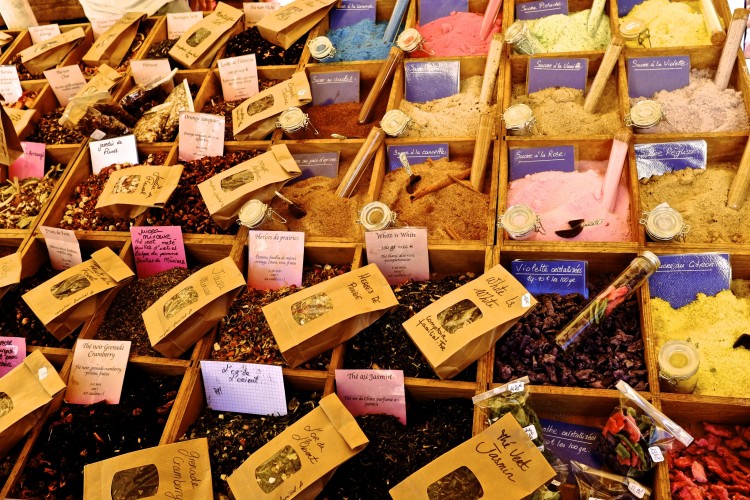 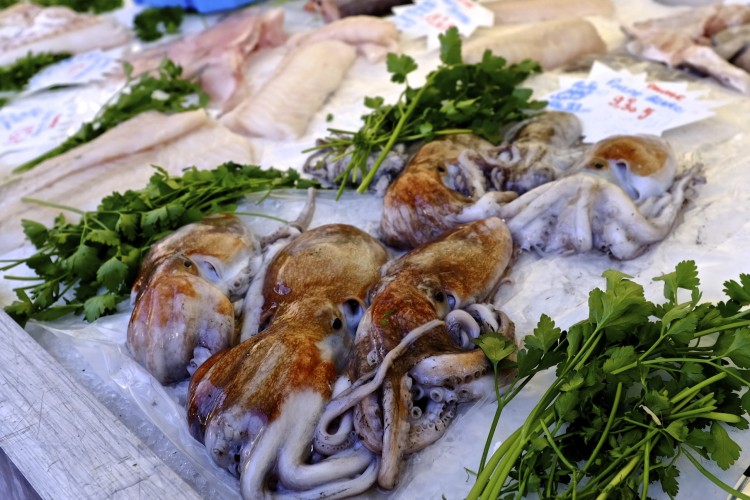 The evening brought a real treat. A private dinner with Michelin starred chef Christian Plumail. He runs small dinner parties at his apartment in the centre if Nice. He cooks in front of you and if you like you can join in. The evening was very relaxed and the food couldn’t have been fresher and indeed tastier. Including canapés and four courses and wine it was a very reasonable €100 per head. 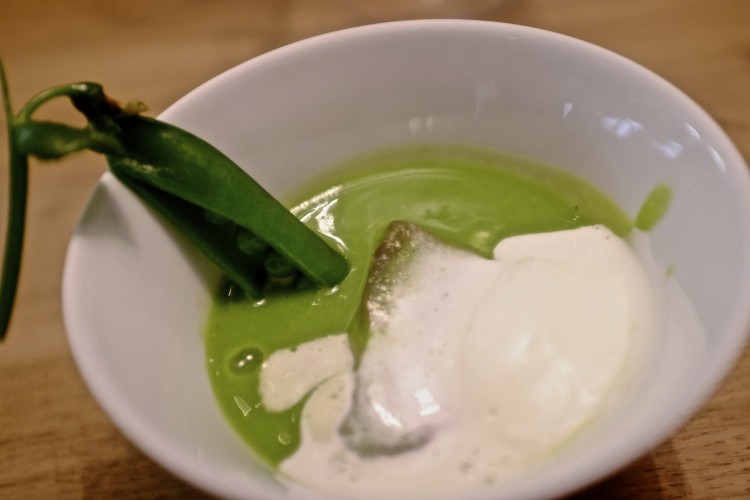 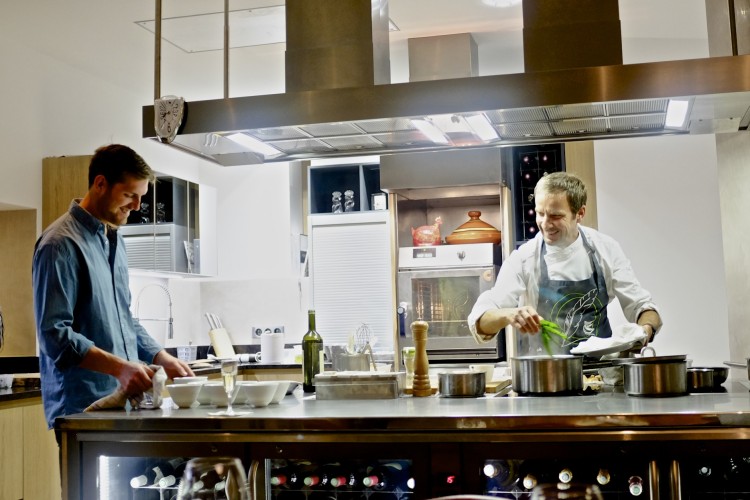 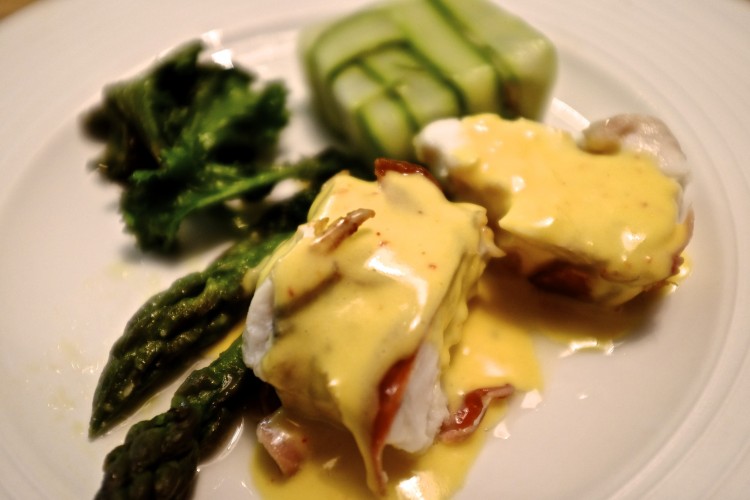 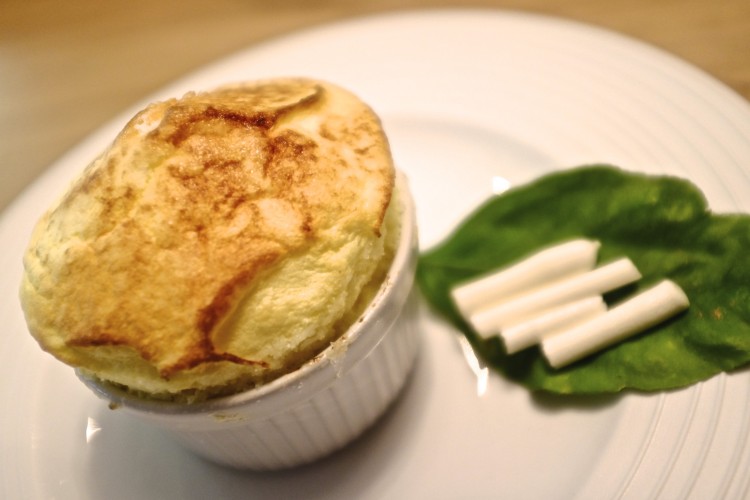 The few days I spent on this diverse trip made me realise that it is possible to have your cake and eat it. I had the chance to ski for a few days (just right for my inexperienced legs) enjoy the après ski and all the superb food and then just a couple of hours away hit the Cote d’Azur for a laid back Mediterranean vibe, that’s something for everyone. You can even see the Alps from Nice. How cool is that! 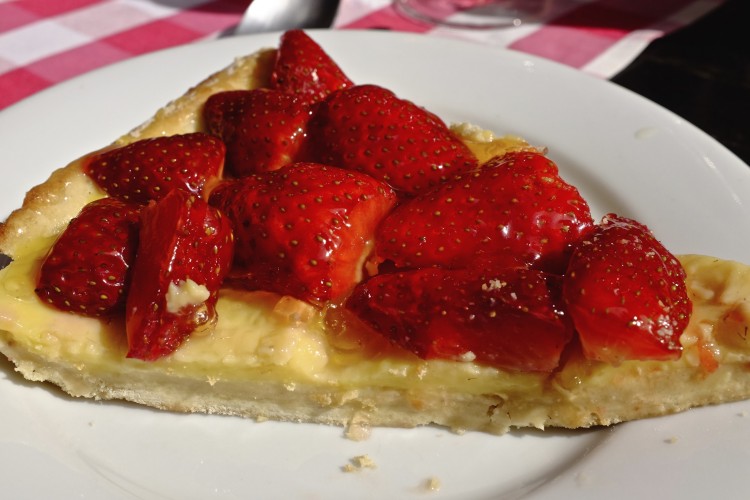 For more information on Pierre & Vacances ski holidays and other useful information go to: