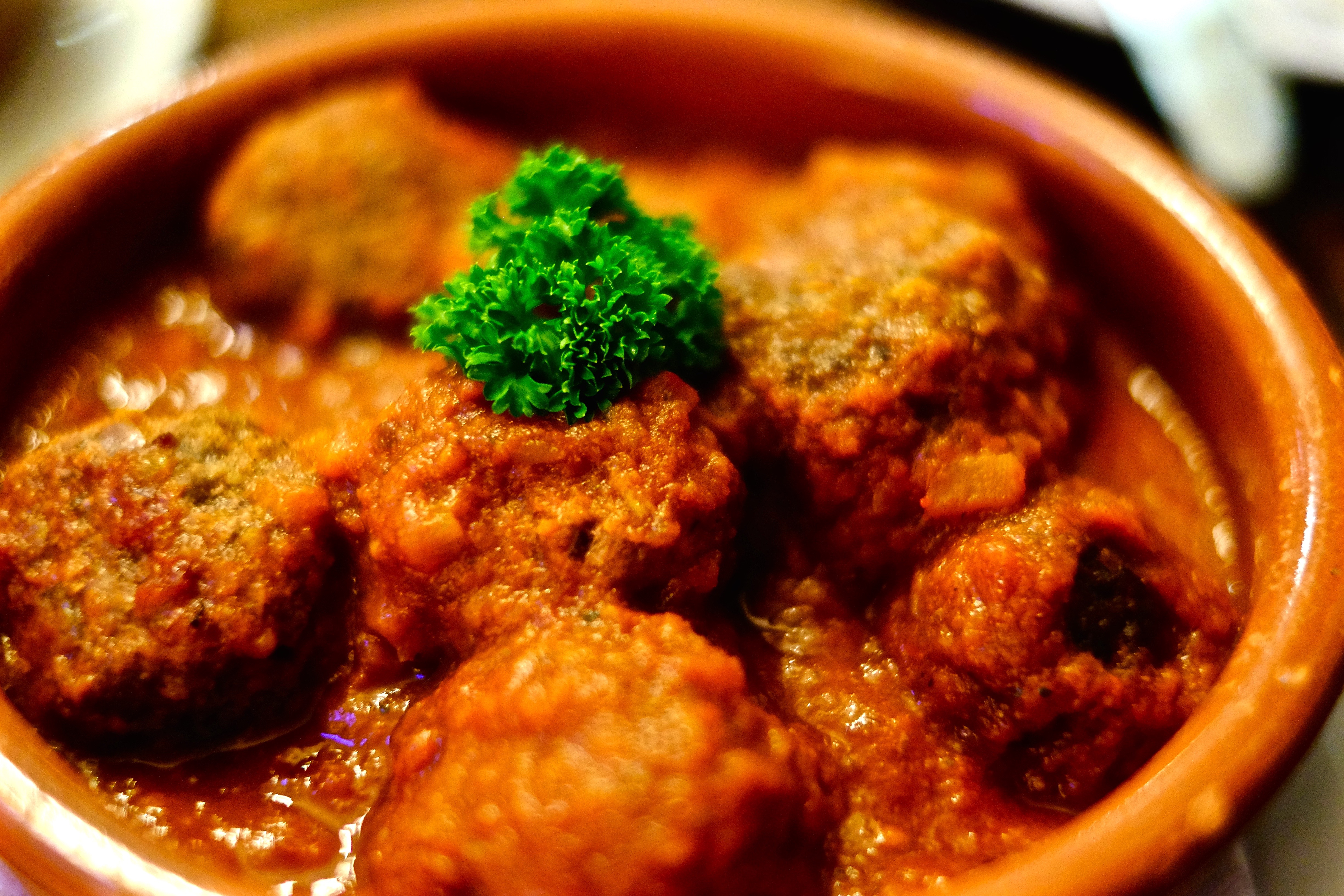 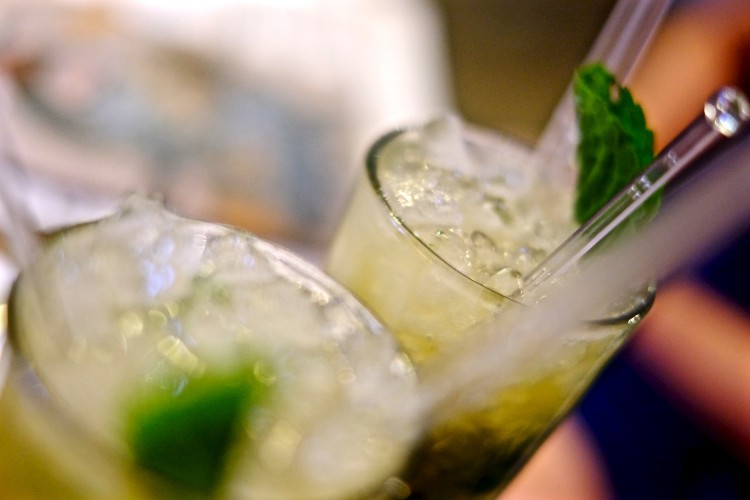 Hidden amongst the tribal stalls and T-shirt shops within the mini city that is Camden Lock The Cuban can be found. It’s a large place that operates on two floors. Upstairs is a slightly quieter eatery and downstairs is cocktails and food with a few discrete booths to hunker down in. We chose downstairs as it had something of great interest to C, my dining companion. 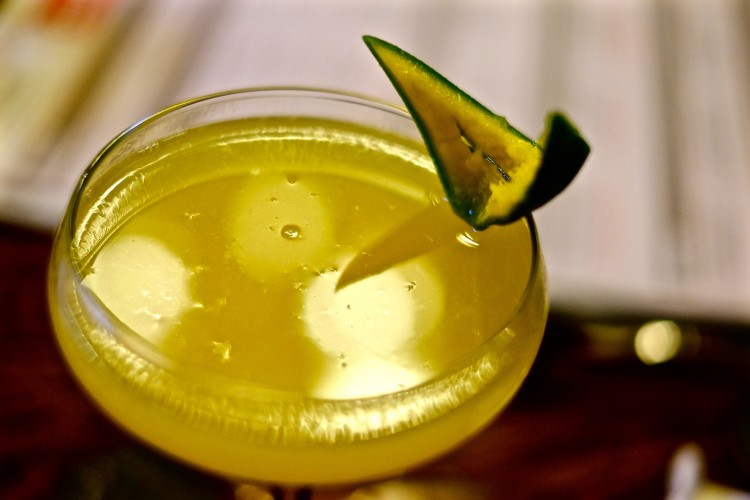 Firstly if you go to The Cuban ask for their cocktail ‘book’. It’s full of revolutionary titled tipples like the Rum Uprising or Share with a Compadre. A couple of mojitos later and we were ready for one of their most popular – Ché’s Taken a seductive mix of apricot brandy, mango, rum, apple juice and a splash of lemon. Lipsmakingly good. 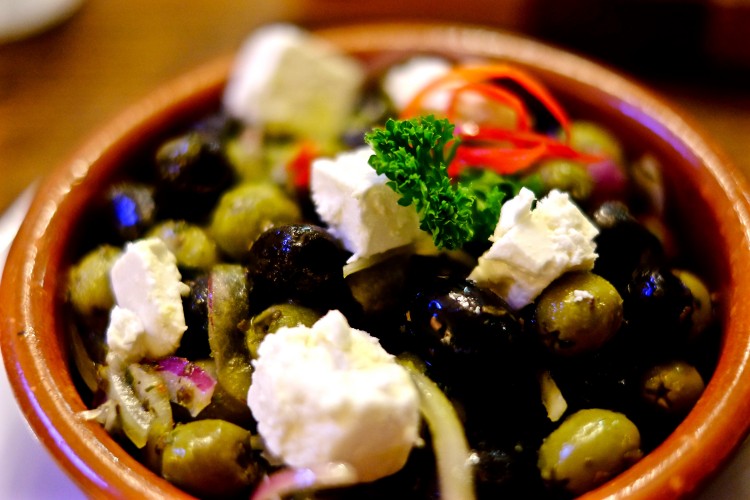 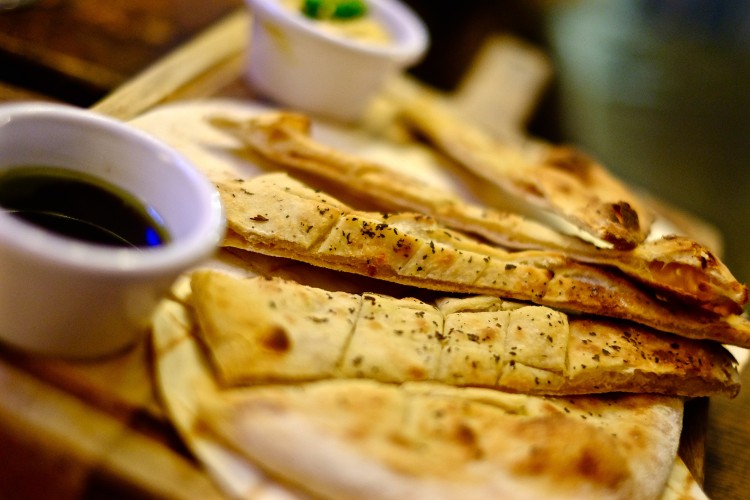 There was quite loud music being played and we wondered why as there were no signs of a band or DJ in the house. Then slowly at first but steadily we realised that the floor (which is quite large) was beginning to fill up with people and they were moving to music. Dancing in fact. There was a leader as well. Then it dawned on us we had walked into a Cuban dancing lesson! 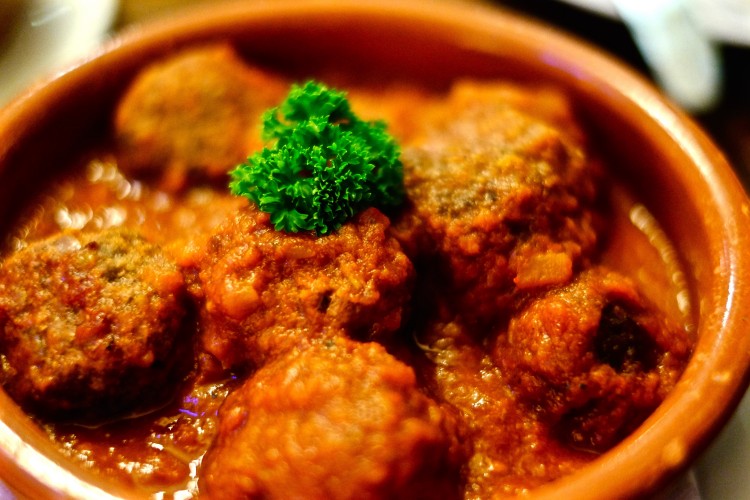 With the pleasant rumble of lessons in the background we set about perusing the menu. It was a hybrid of Cuban, Spanish and South American food with a few classics that had a twist. The marinated mixed olives were good as was the warm breads with balsamic and hummous dip and olive oil. 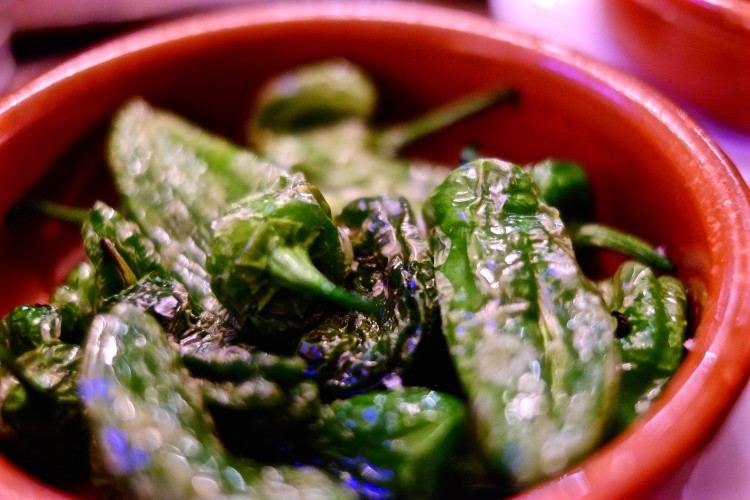 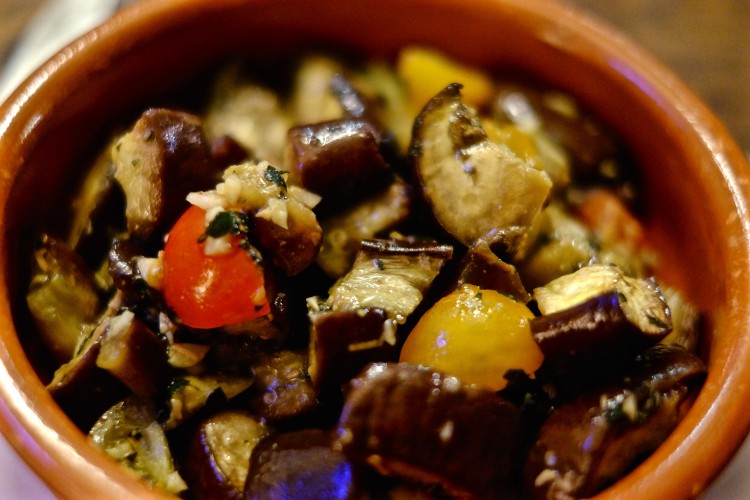 The tapas section of the menu was where we really started and went for Padron peppers, which were delicious, small green and served simply, just fried. A bit of bite but apparently one in ten is really hot! Grilled aubergine with chilli and garlic was OK but not a showstopper but the albondigas (pork and beef meatballs) were outstanding. Sitting in a rich tomato, wine and herb sauce I could have eaten twenty of these spheres of delight. 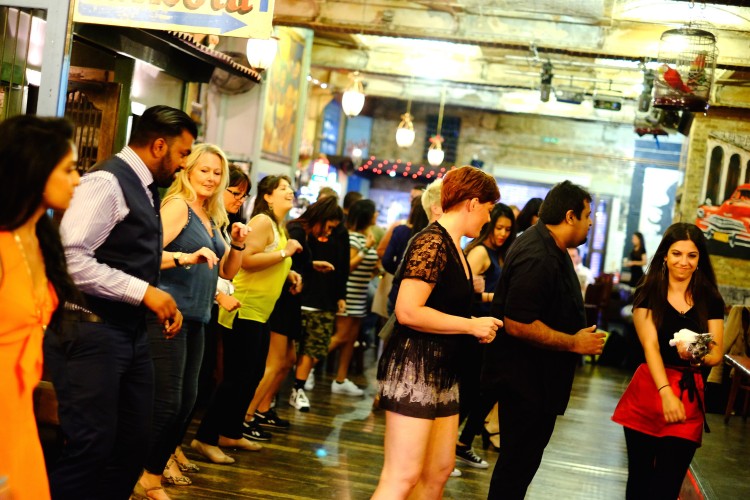 The class was hotting up now with the participants getting loosened up with a few drinks inside them. They hold these classes every Thursday (we just happened to be there on a Thursday). C was really drawn to the ‘dance’ floor and it became harder to get her attention as we ate. Then the inevitable “shall I go and have a go?” moment, she wasn’t very keen but clearly wanted to have a go. So with a bit of gentle encouragement she was up and in the arms of the instructor. I have not one, not two but at least three left feet so sat bemused and taking photographs of a delighted C. 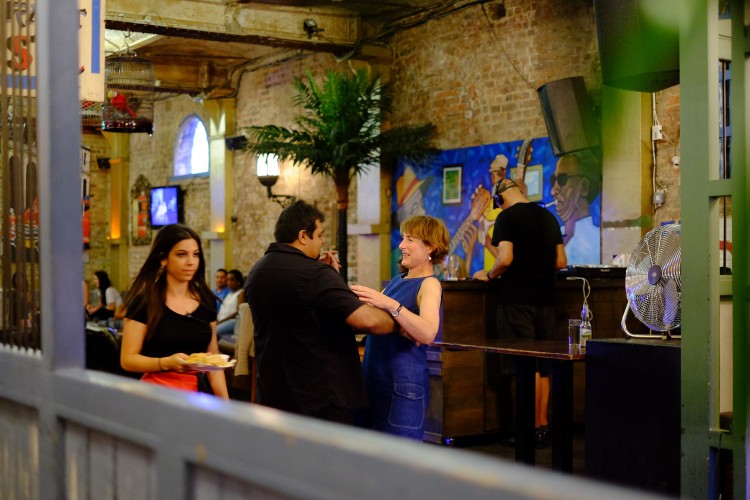 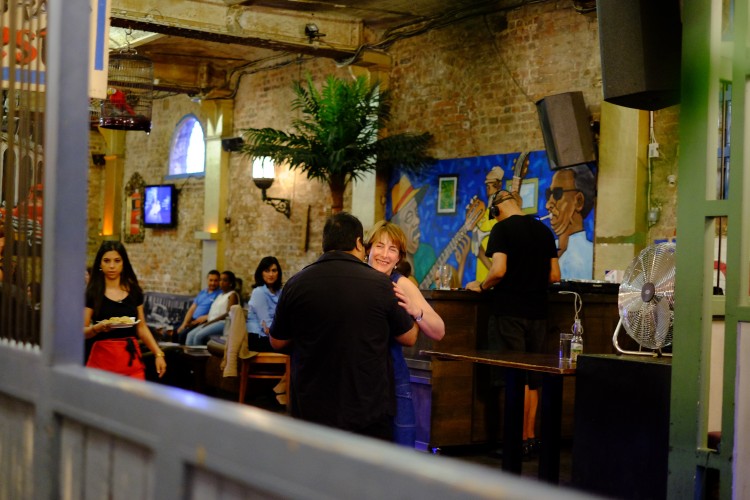 Saved by the main courses C returned to the fold of our smug booth with her head still dancing. C went for a classic burger that could have come with peri peri fries (very good by the way) but she chose the sensible alternative of baked potato. My Lechon Asado con was a triumph of pork belly that came with sautéed spinach and chorizo. This was very good my only complaint was that the portion was a touch small. With an economical cut of meat there is no excuse not to be generous. 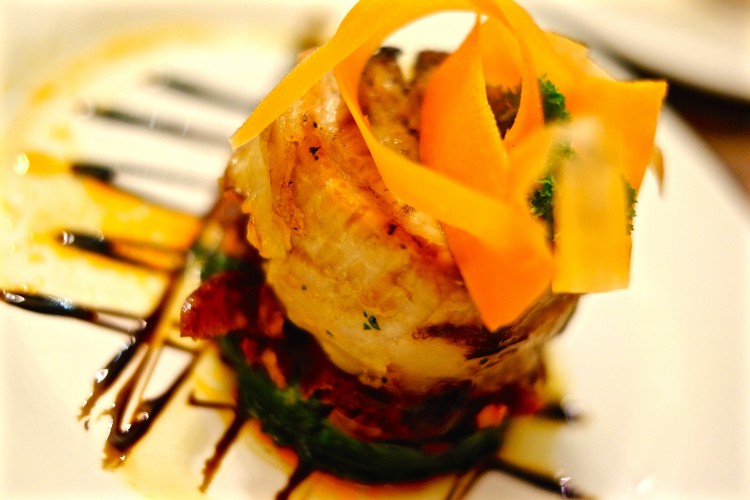 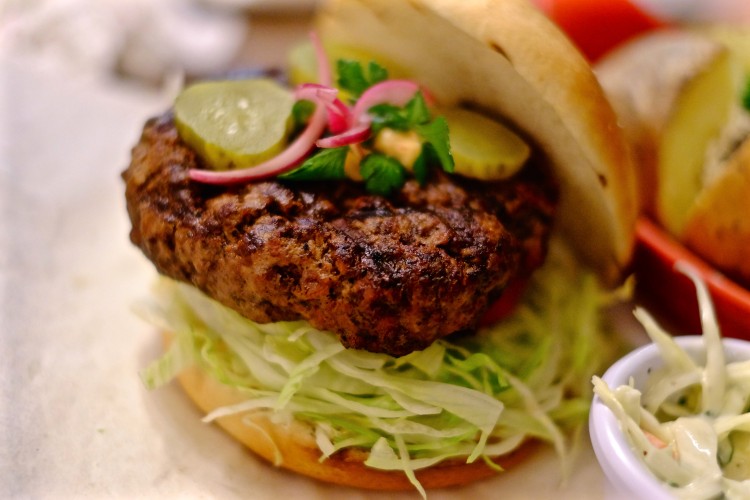 C was impossible to get any sense out of as she just kept on eulogising about the Latin music ringing in here ears. I have since spoken to her and discovered that she has booked lessons and is now the student of things Latino. So the moral of this story is if you fancy the idea of a quiet meal out with a friend choose your location carefully on the other hand if you fancy a night out with good food, zippy cocktails, foot tapping music and a dance move or two in-between courses then The Cuban should be right up your calle. 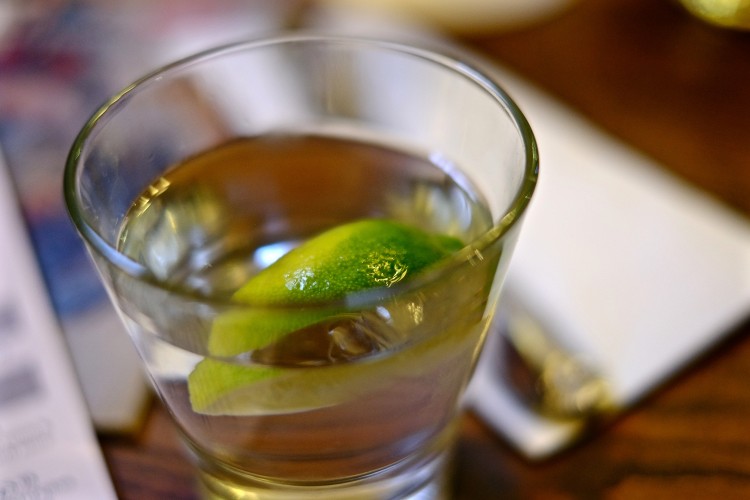 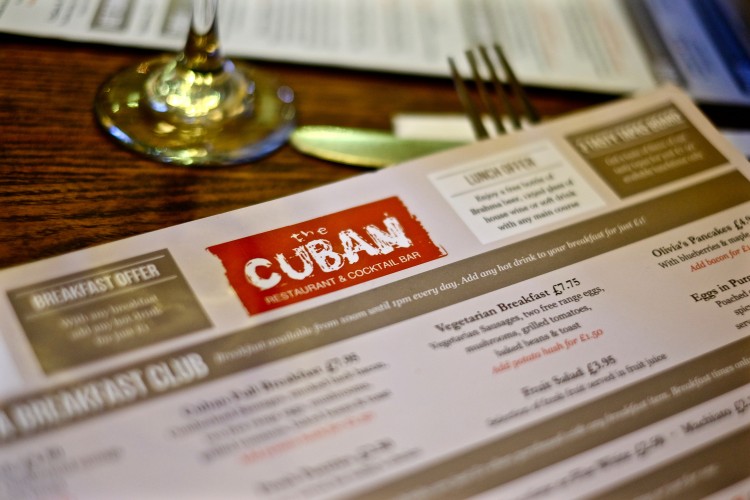