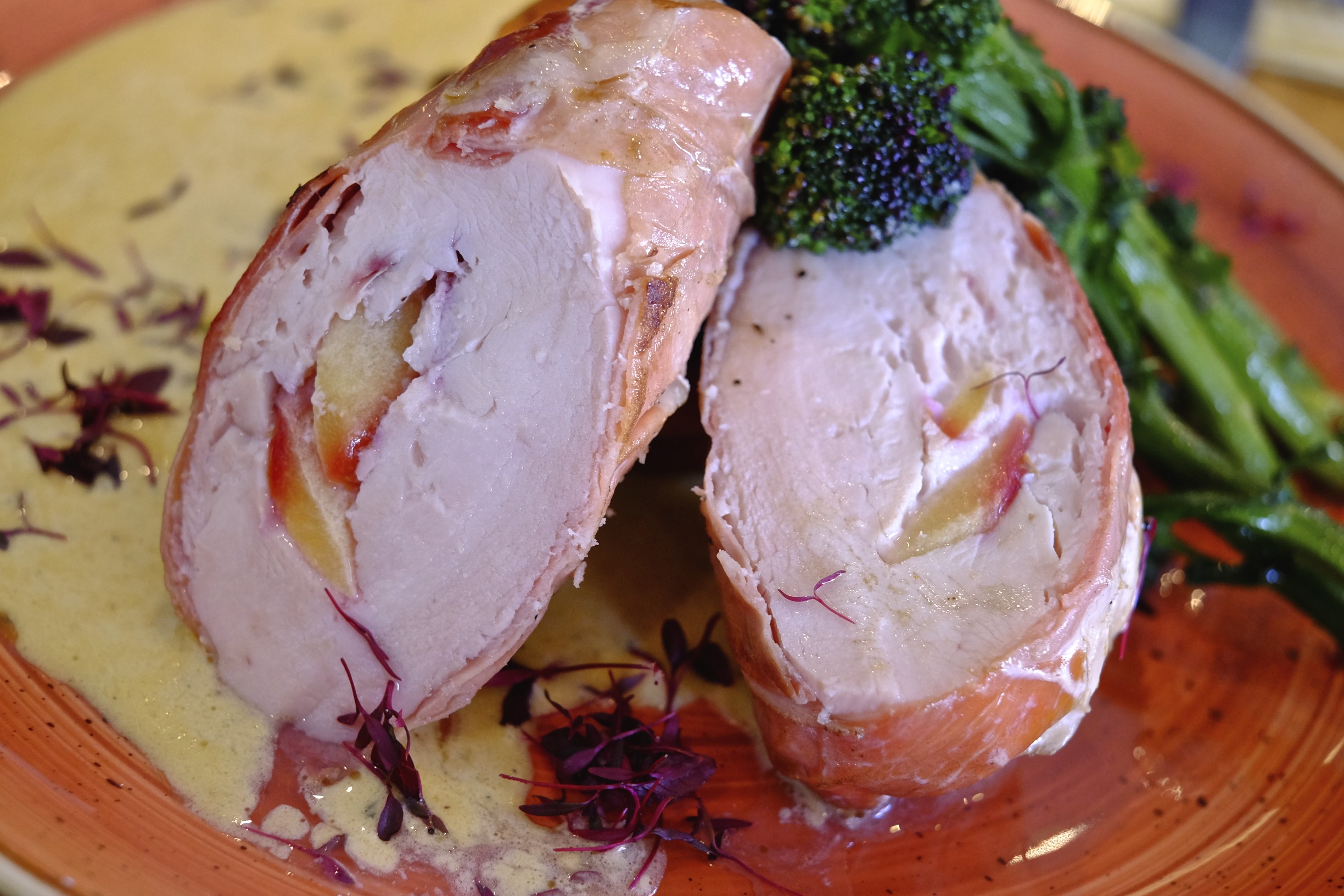 The Duke on the Green 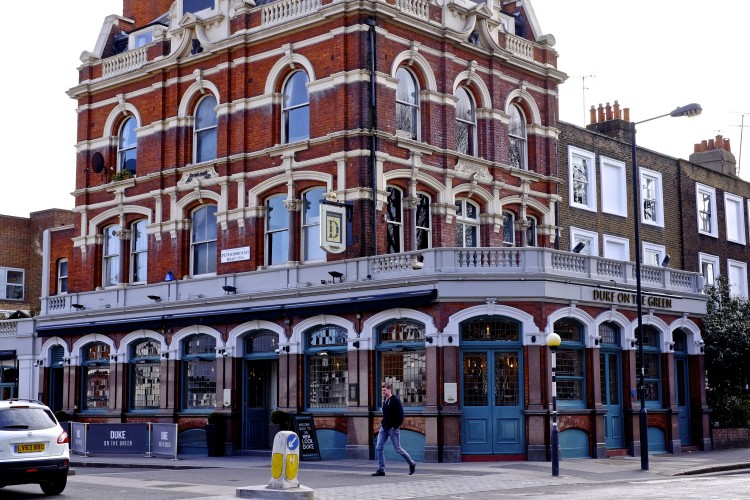 Parsons Green is really Fulham. The Duke on the Green sits prominently in front of the green. It is a glorious Victorian pub that has retained much of its character despite the ravages of fashion to remove it over the years. It’s just had a makeover that lends it a modern air but still retains a loyalty to its heritage. In short it’s one of the new London boozer scene that has changed to survive. 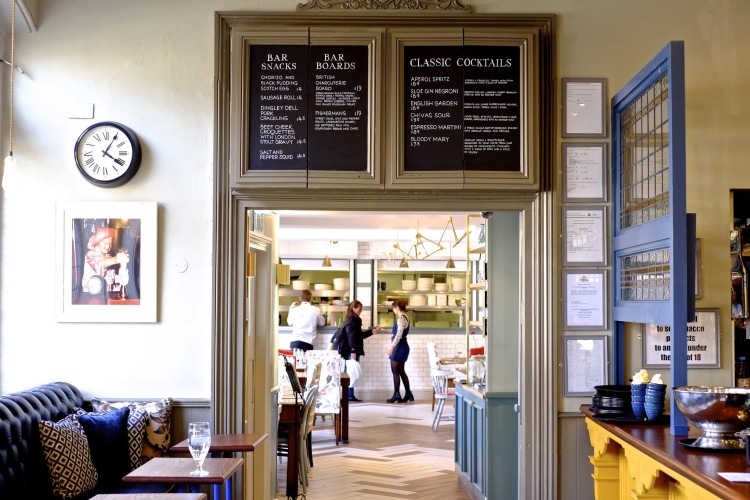 I decided to take my two sons during the school holidays so here is my half term report. We jumped out at Sloane Square tube and caught a bus down the Kings Road that then becomes the New Kings Road, we couldn’t miss The Duke on the left hand side, there’s even a bus stop a few yards from the entrance. 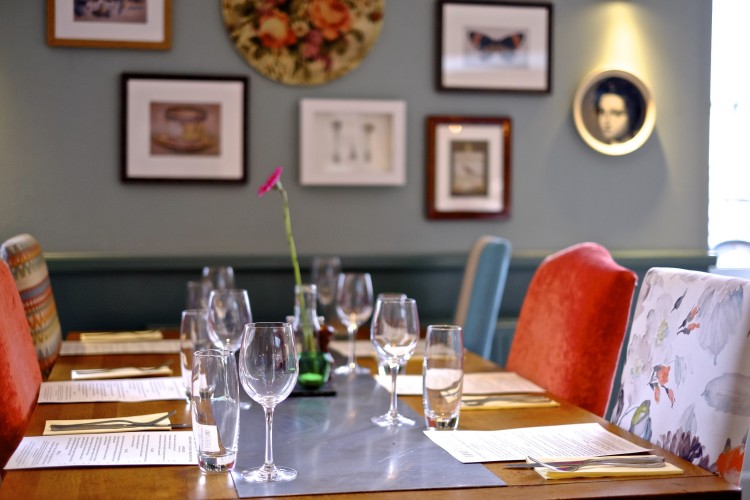 The building has been skillfully divided into two sections one is clearly the old pub side with a clean finish and some interesting lights hanging from the enormously high ceilings. The other is the food side with a view of ‘the pass’ at the end. It is a pleasing mix that feels just the right side of change. It doesn’t look like an old pub any more but it does look smart and inviting. 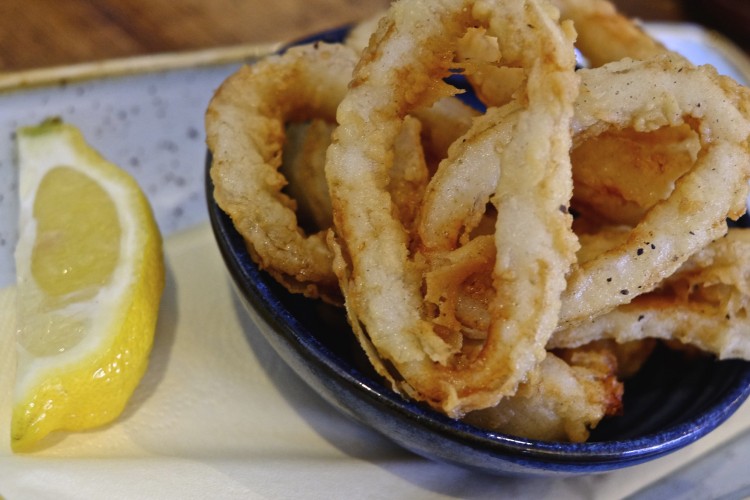 The new makeover has produced understandably a new menu, which I feel has a few teething problems but on the whole is workable. Families are very welcome in this new space and there are plenty of highchairs if needed. 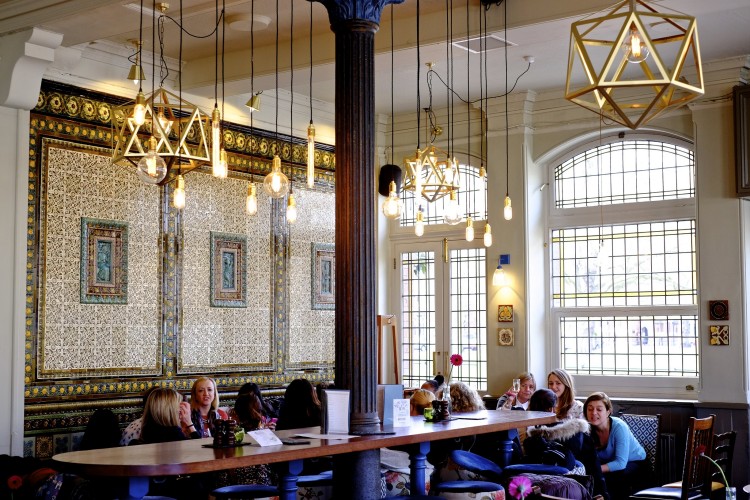 We looked at the ‘lunch’ menu that covers 12 – 5pm. I don’t know why it should really differ from the evening menu, we wanted starters there are none on this menu. So we improvised and took a look at the ‘bar snacks menu’ which has a very good wine list and a few choice nibbles. 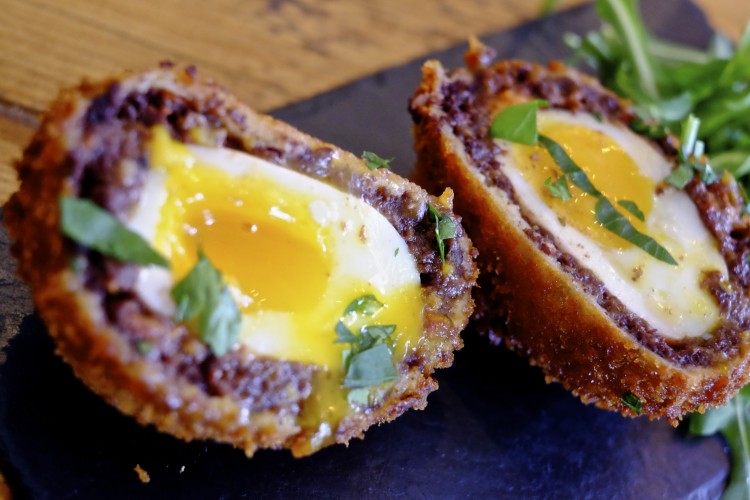 X and I chose one of my favourite new ‘old’ foods, Scotch eggs. These were super duper good with a runny yolk and a touch of green leaf served on a piece of slate. At £4 they are a bargain. A was not in the mood for an egg but was willing to try something new. He opted for salt and pepper squid. This is essentially calamari he loved it! Looking like giant onion rings the chef (Paul) had done his work well these were not rubbery but fresh and easy to eat, a slice of lemon adding to the mix. 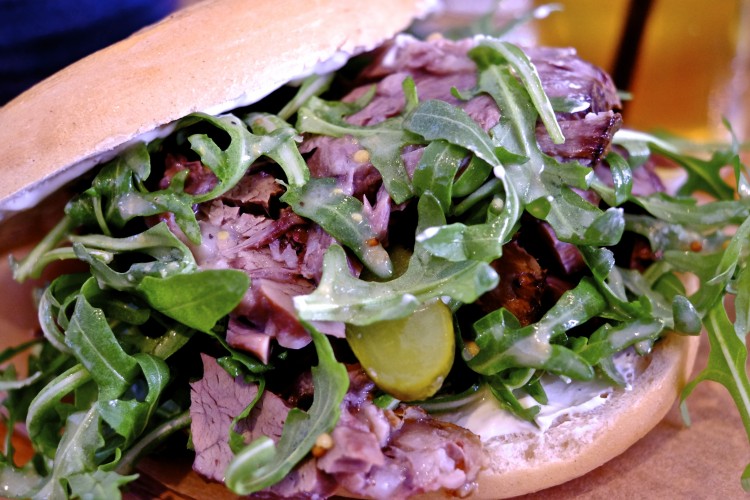 Back to the ‘lunch menu’ and it kicks of with a section of sandwiches that come with fries. A good place to start for a nine year old, so A chose another new experience for him; hot salt beef bagel with pickled vegetables and peppered cream cheese. The beef was perfect, soft with a high melt factor. The only reason that A didn’t eat it all was he was getting full. I’m not surprised it was a generous portion. 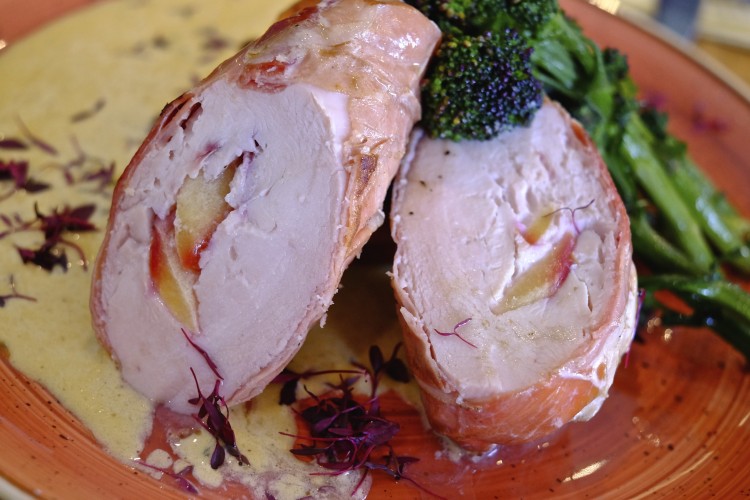 The food section had a few diners around us although with a clever layout it is possible to feel quite private and mingle into the background. It’s a quality in an eatery I like, nothing worse than the dreaded open dining room where everybody can see everything.

The excellent Jessica, who had recently arrived on our shores from North America, served us, she had good service down to a tee. She will go far with her easy manner and non-fussy approach. 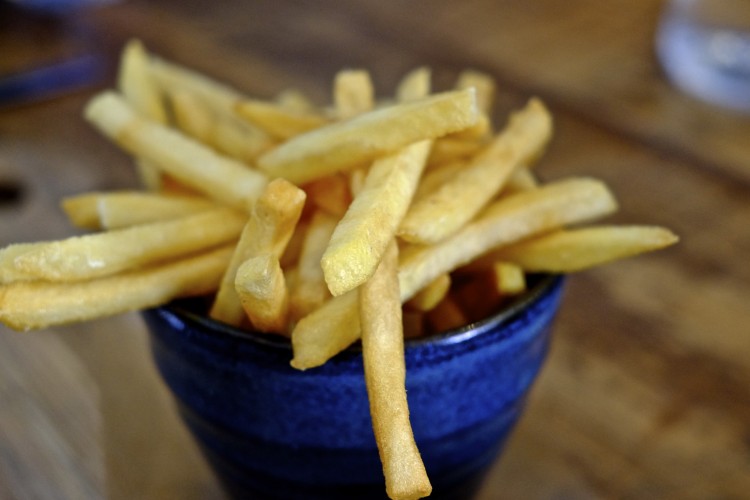 Mains started to come in. These were from the lunch menu as well under a section called ‘plates’. X had a chicken supreme stuffed with plumbs (although stuffed is spelt wrong on the menu so we weren’t sure exactly what would arrive until it was before us). It was wrapped in Wiltshire air dried ham and a Shropshire Blue and a sweet potato fondant. The chicken was good (and the stuffing) the sauce also worked but I felt the sweet potato was lacking any seasoning. 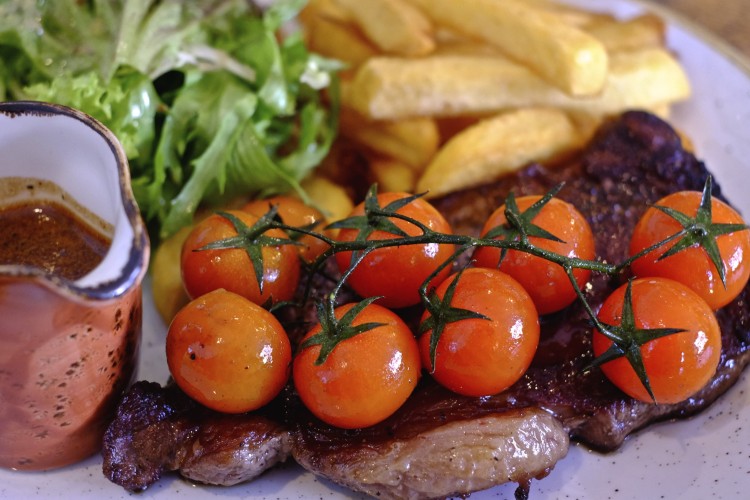 My 21 day aged Aberdeen Angus did what was expected of it, tasted great, it came with chips that I suspect were not hand made. They professed to have truffle oil on them according to the menu but didn’t. I queried this and was told that the menu is new and they didn’t have any truffle oil in the kitchen. This is a schoolboy error in my mind. If you haven’t got don’t say you have. 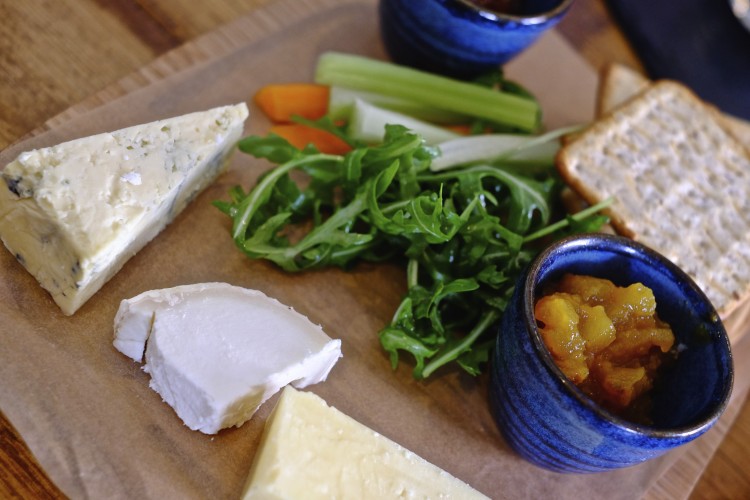 The profusion of menus continued with the dessert menu which also I was pleased to read had a reasonable collection of dessert wines. All priced at £6 both our first choices of vanilla custard tart and molasses roasted pineapple with dark brown sugar crème and peanut brittle were not available as “the evening chef wasn’t in yet”. This is another schoolboy error if you have a dessert menu for the daytime then make sure that the five items listed are available!

We ended up with a dark chocolate and raspberry crème brûlée, which was good but very rich, a lemon posset that was super but defeated us all due to richness and a British cheese board with crackers and chutney. 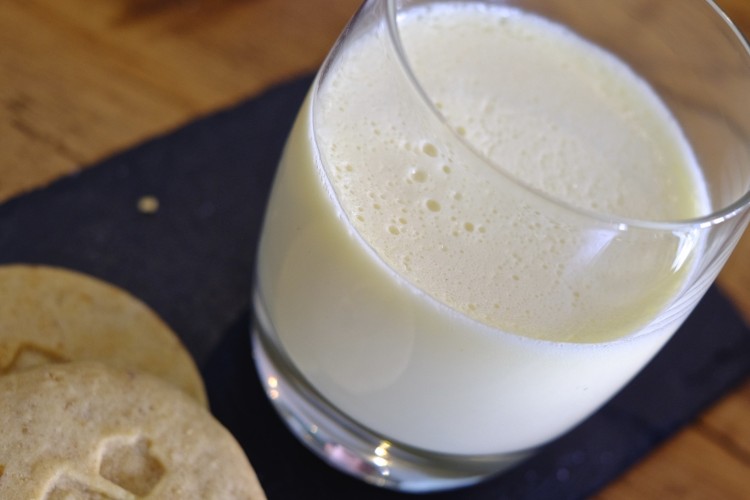 The children found the desserts, a bit much which didn’t surprise me as they were quite grown up. The thing here is a matter of clarity and direction. I can forgive an error or two in a new restaurant but this isn’t a new restaurant it is a renovated restaurant.             All the food we had tasted good, some of it very good (Scotch eggs!) but the thinking a bit disjointed. I firmly believe that less is more on a menu, why not one menu with sections (if you must) for times of the day like a traditional brasserie? I find this style of layout where you can see everything a boon for simplicity (and I suspect a saviour for the staff). So well done The Duke on the Green for getting good food out of the kitchen but must do better on the menus front. 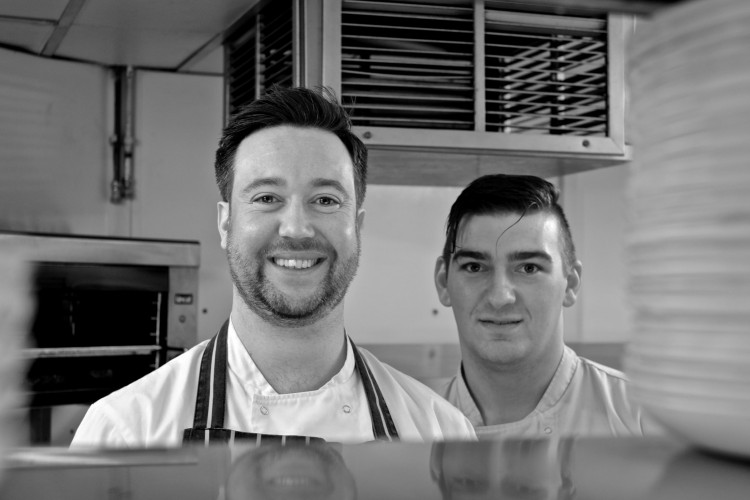