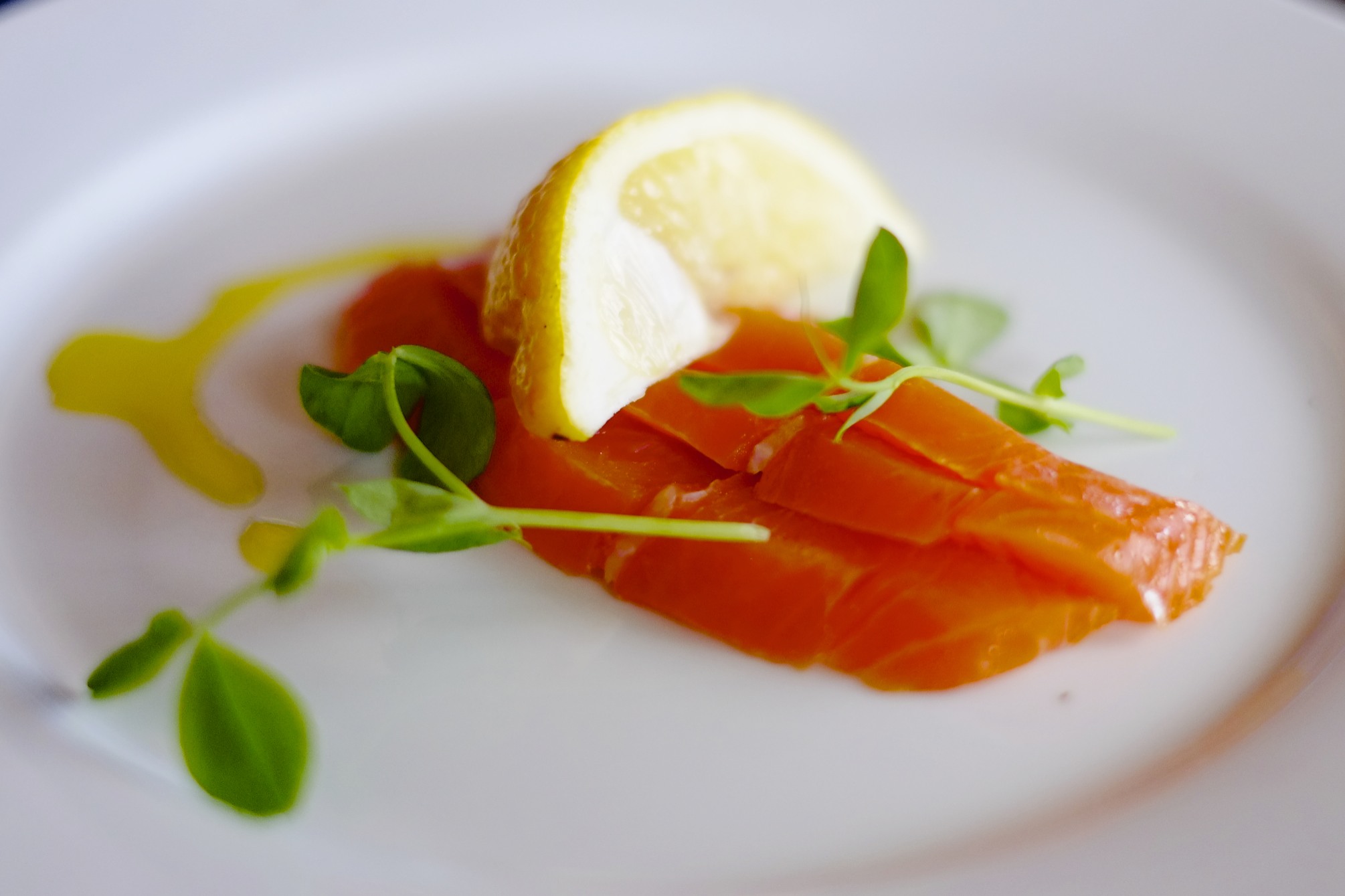 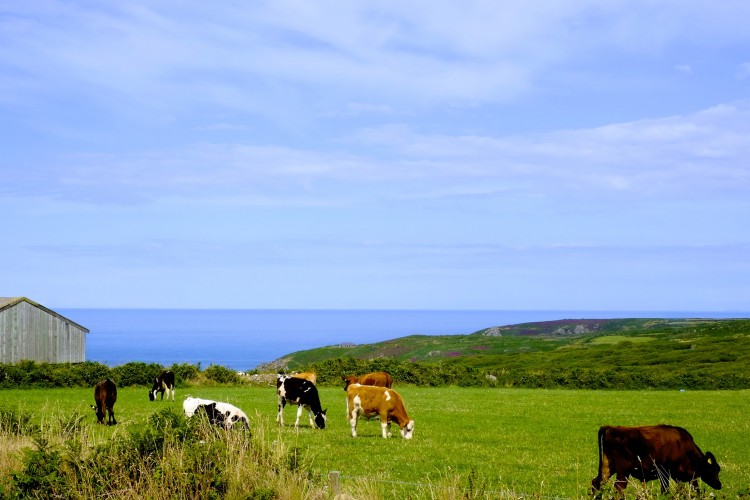 At the very outer limits of South West Britain between Land’s End and St. Ives you will find The Gurnard’s Head Hotel.  With seven rooms and an expansive restaurant and bar it is a local landmark that you can’t miss, literally, it has its name painted in giant letters on the roof.  Its setting couldn’t be more bucolic.  Cows wandered in the neighbouring fields, such was the timing (and length) of our lunch that I saw them go in for milking and come out again to graze. 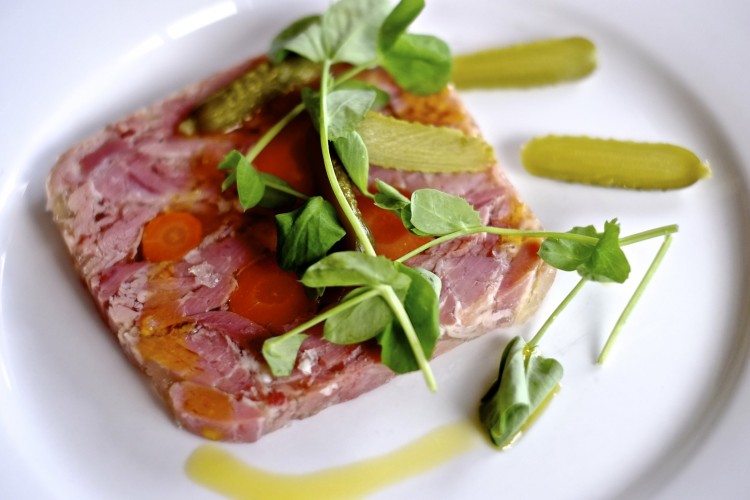 The restaurant sits firmly in the category of traditional with occasional flourishes in presentation.  M, A, (our eight year old) and myself were down there for a holiday and I thought it was about time that I called in to The Gurnard’s Head, I had heard good things about it.  The drive from St. Ives is a journey that affords splendid views of the sea and gives the appetite just enough time to get ready for lunch. 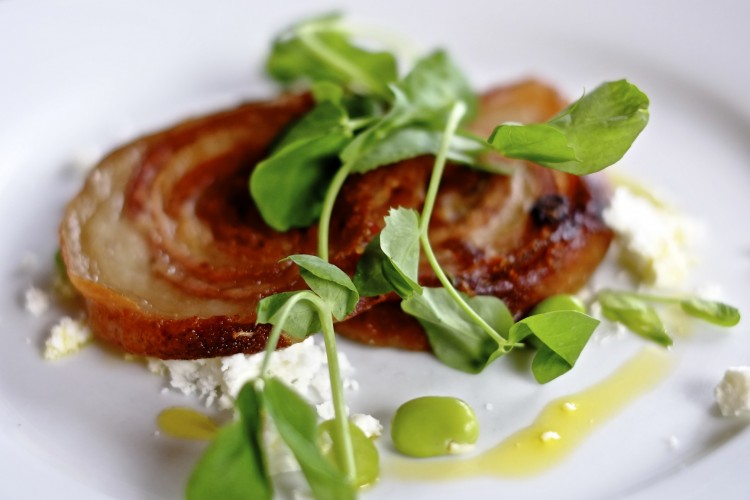 We arrived late but the rooms were still very much in motion, a large gathering of eleven making the most noise.  This is a very welcoming space, the original scrubbed floorboards, uneven walls and mismatched tables set the scene.  There is plenty of space for everyone and I noticed piles of logs everywhere in preparation for winter.  I couldn’t think of a better hotel and restaurant to be holed up in when the snow is six feet deep outside. 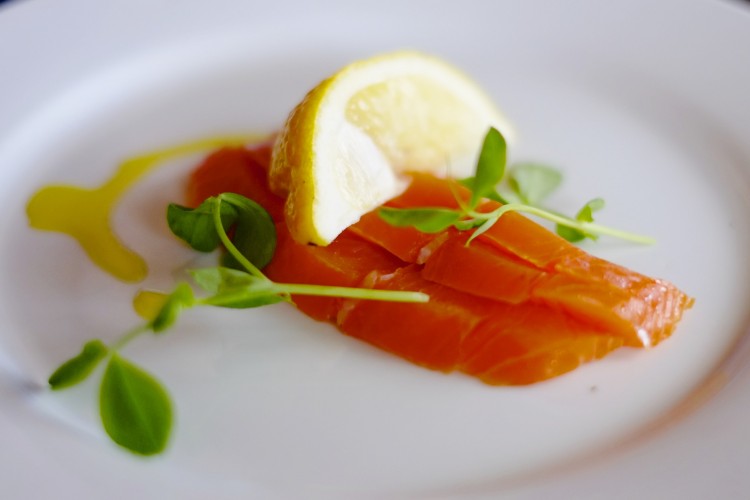 Thankfully for us this was a bright sunny August day, so I chose a homemade ham hock to start.  This had great texture helped by the gherkins on the side it was clearly fresh and tasted good.  A had his all time favourite, smoked salmon which hadn’t come from very far – Newlyn, near Penzance in Cornwall. This was a good portion for a child’s menu and came with a slice of lemon, very grown up and tasty, he ate it all.  M went for lamb breast, two thin rolled slices of lamb with a few runner beans and local goat’s cheese.  This was glorious, the warm lamb was fatty and full of deep flavour, and I loved it. 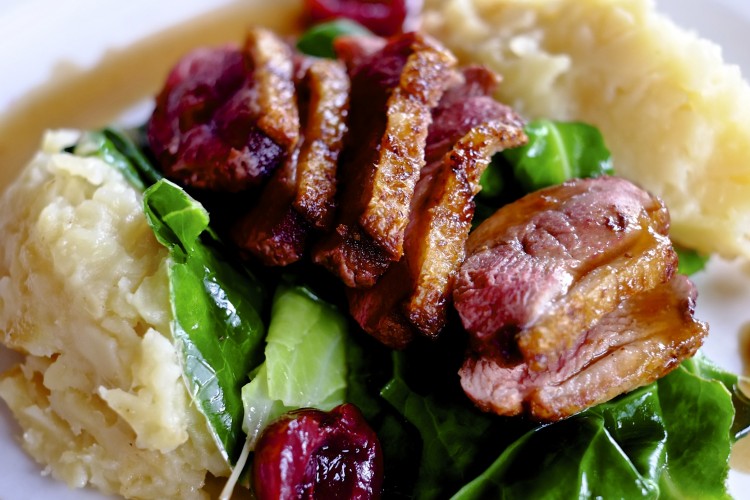 Our eldest son had taken a day off from reviewing (he is usually my shellfish expert) to go on a sailing course in Falmouth.  Apparently he thoroughly enjoyed falling into the water and learning how to turn boats up the right way and then clamber in.  I’m glad I wasn’t on the course, I’m not sure if I could have done any of that especially after lunch. 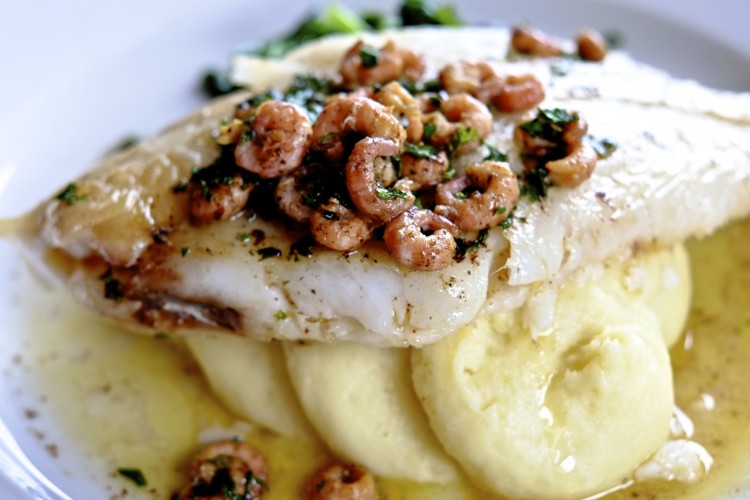 The service is very casual at the Gurnard’s Head, it’s all part of their eat, drink, sleep philosophy.  Nothing was hurried which is just how I like it.  It is described as a dining pub with rooms.  I’d say that was just about right.  They are not trying to be a swanky restaurant or boutique hotel, just to serve simple well-cooked local food and provide relaxed comfortable accommodation. 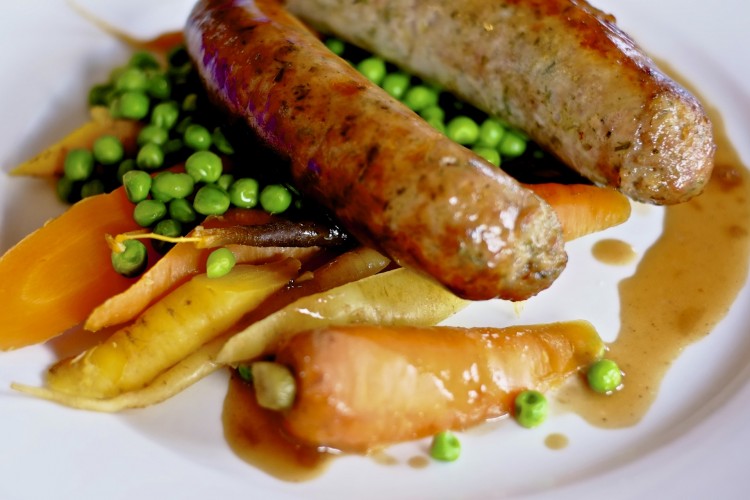 The mains were good but I do have one grumble.  My Terras Farm duck was lovely and had a deep rich flavour but seemed tiny in comparison to M’s grilled Megrim sole with brown shrimp butter, which was barely able to fit on the plate.  I don’t mind starters being on the small side but main courses that are half the size of a fellow diner is just silly.  Proportion is the key here, you really want the overall look of the table to be balanced and the quantities similar for each plate.  They both tasted good however, M’s garlic mash that came with the fish was super.  The sides were exemplary a Gruyere & Parmesan cauliflower cheese was brilliant, crisp and tangy.  Creamed runner beans with Parmesan and nutmeg (a daring and wining combination) were equally as good.  A had fantastic local pork and herb sausages as his main with buttered rainbow carrots with marjoram.  Of course we all wanted the carrots to be striped but not surprisingly they were individual white, purple, yellow and of course orange ones. 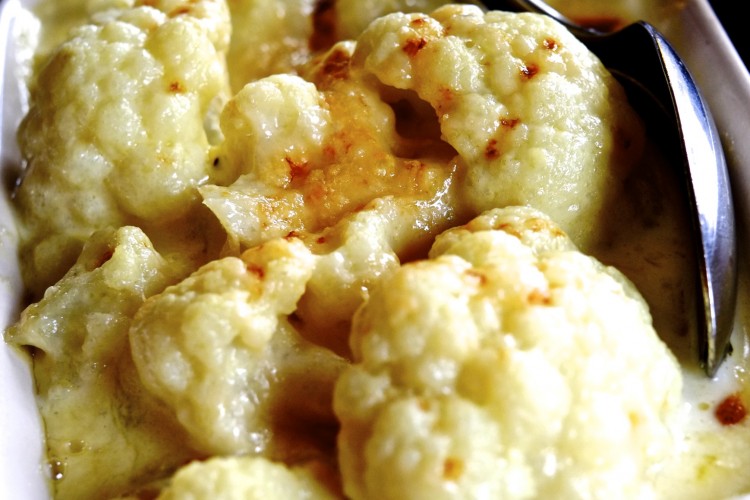 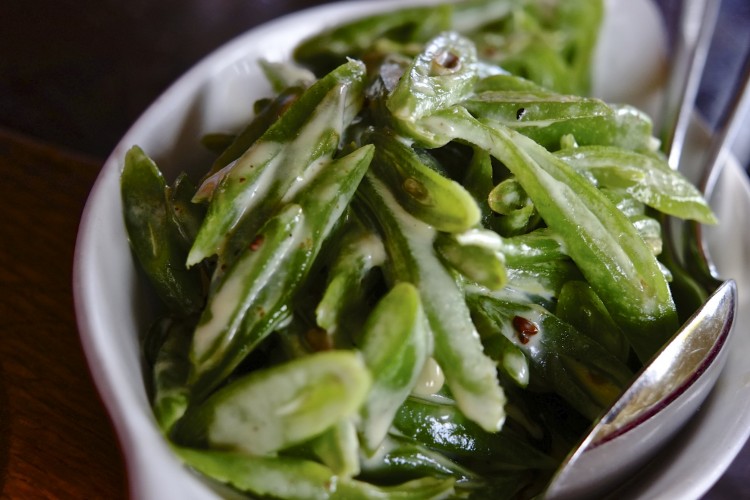 As the cows were now returning after doing their good work it struck me that this little bucolic paradise is really an excellent place to let a couple of days just drift by.  I was beginning to feel part of the furniture.  This may have had something to do with the extensive and knowledgably assembled wine list. 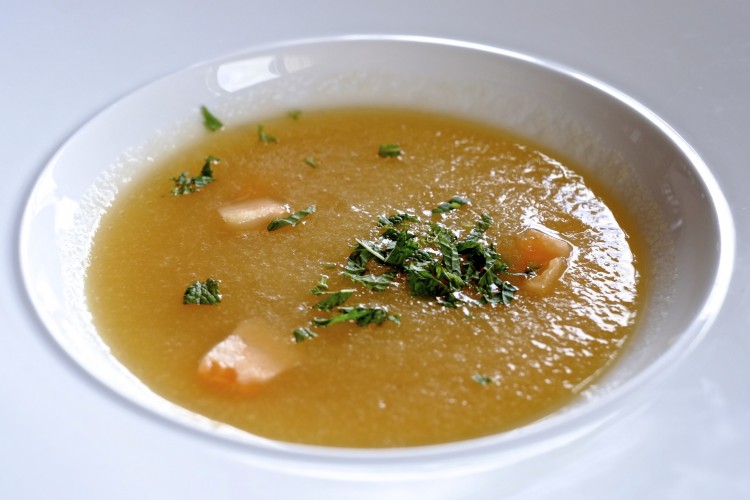 Summer Desserts as they are known here came, M made a mistake by ordering the chilled melon soup with coconut sorbet and mint.  It was not that it was bad but M just didn’t like the flavour combinations at all.  She said “It reminds me of something with ginger in it that I don’t like”.  Very graciously they changed it without a murmur and M’s usual smile reappeared when a rather good vanilla pannacotta with strawberries and basil was placed in front of her.  A had Cornish ice cream with a rich chocolate brownie I don’t think I have ever had a bad ice cream in Cornwall.  Today was no exception the brownie was very rich though.  I enjoyed my cheese board that had good fig and apple chutney and a fruit biscuit, which was new to me but performed its duties well. 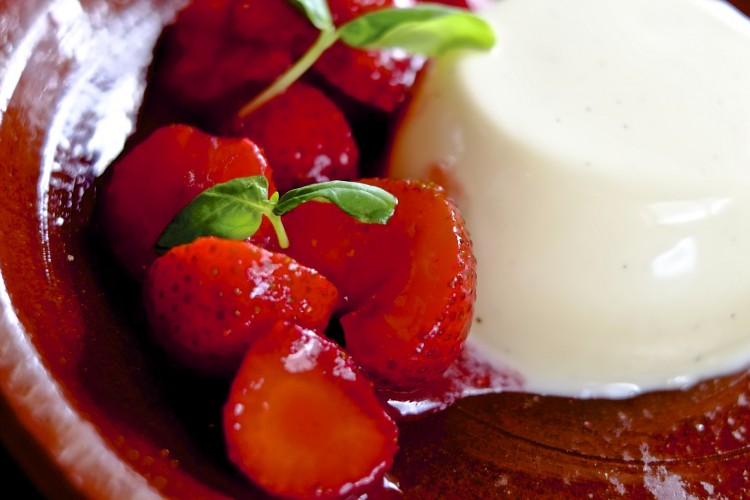 The lunch I feel had been a success the minor issue of portion sizes could very easily have been an unusual slip up.  We were told they were a person down in the kitchen that day so everybody had to work just that bit harder.  The chilled melon soup is a curious dish that I didn’t particularly warm to (sorry!) but then I didn’t order it, the fun did seem to have been taken out of the melon so I understand why M didn’t take to it.  But they sorted that out for us so I have no complaints.  We had spent quite some time here by now and I feel as if we stayed any longer I might well become so familiar with the cows that I will be on first names terms soon.  Do visit the Gurnard’s Head, the food is good the setting unique and wild and if it all becomes too much just book yourself in and sleep it off. 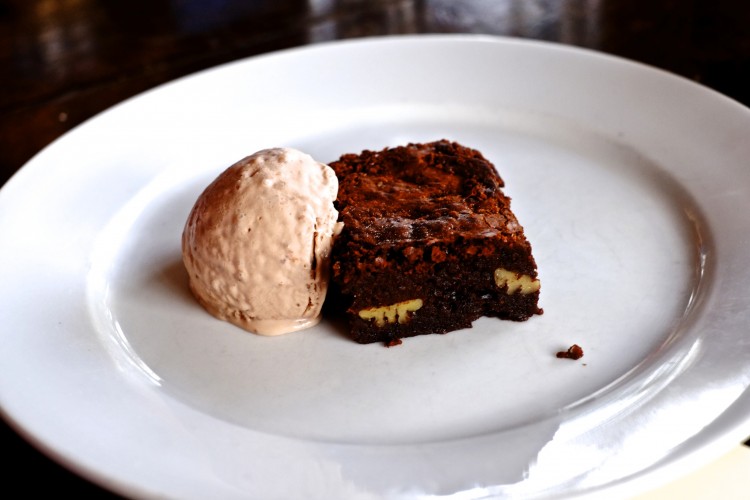 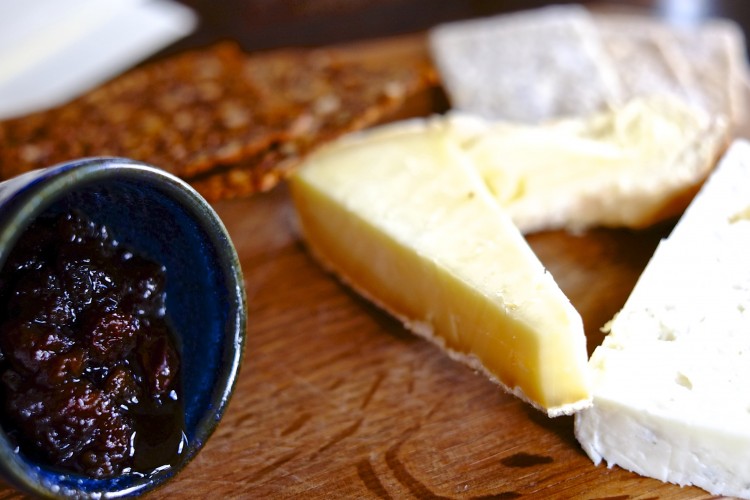