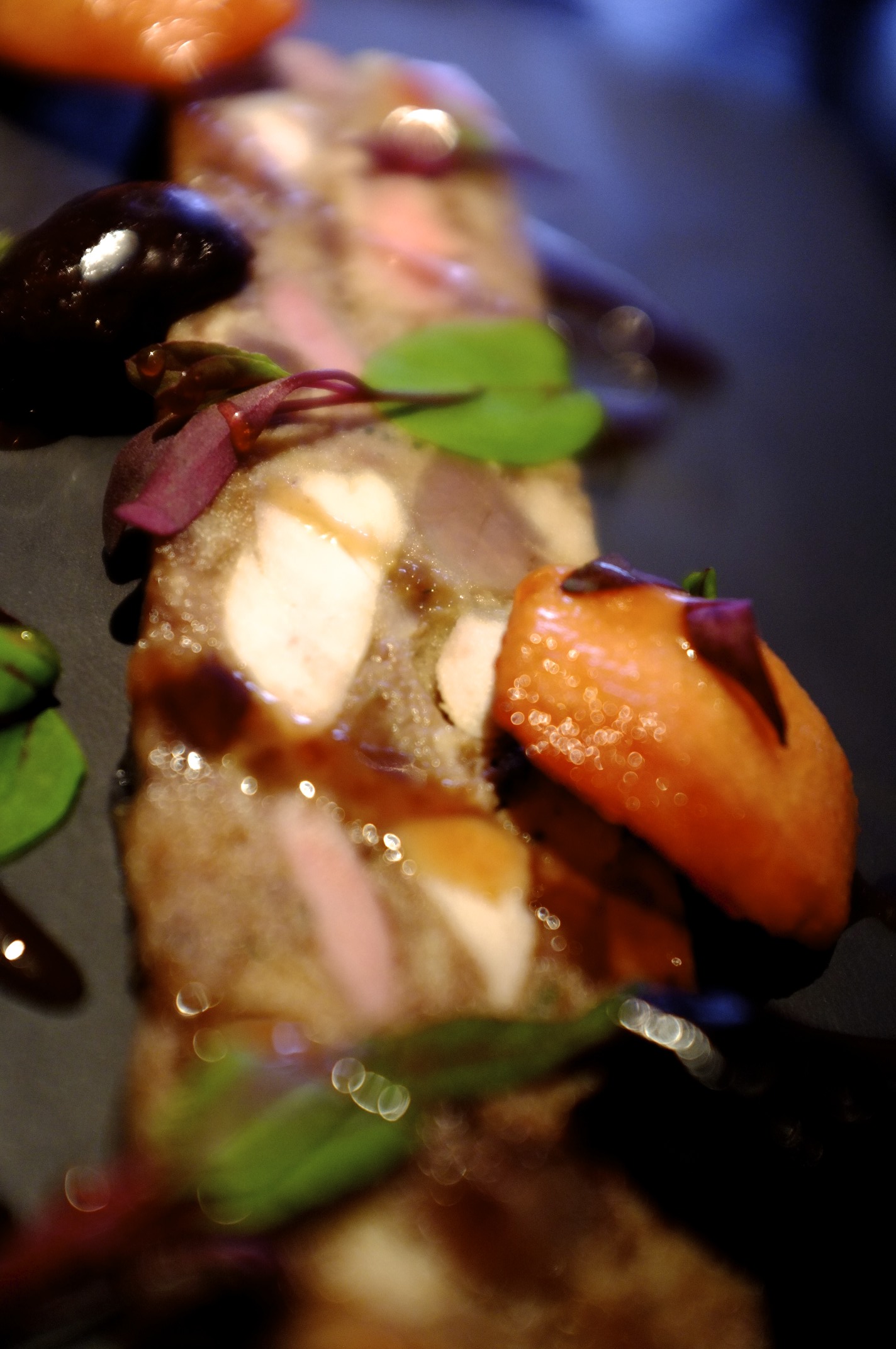 As part of my quest to find family restaurants of quality in Kent I decided to travel down to Dover.  I had heard a whisper or two about The Marquis at Alkham.  Well, nearly as far as Dover, we were heading for Alkham, which is just outside.  The delightful village set in rolling countryside is as far from channel tunnel/ ferry port hell as you could imagine.  Peaceful even on the cold, rainy, windy Sunday we chose to visit.  Who could resist the charm of a village that boasts a cricket pitch that claims to be one of the smallest in England?

It used to be, as with so many restaurants these days, a pub.  The Marquis of Granby was in days of old the village pub, a hub of the rural community.  Well it still is.  The locals thrive here.  It’s now an AA rosetted, Michelin knife and forked accolade owning, bona fide small country hotel with ten rooms and an excellent restaurant.  This was the purpose of my visit.  The serenity of our surroundings was the first pleasant surprise.  In fact the first piece of the magical jigsaw started to fall into place when we were seated in the comfortable dining room.

As we sat and ate spindly bread sticks and thick humus of roasted onions and white beans, a little amuse buche with more than a hint of garlic.   A mysterious man dressed in black came up to the table and introduced himself as magician Mike Davis.  Our boys were captivated as indeed were we.  My 14 year old is really into street magic (a big Dynamo fan) and takes pride on being able to work out how tricks are done.  Not today, this guy was fantastic at close up work.  My seven year old helped out as an assistant and the size of his eyes said it all.  It’s a brilliant idea to involve the whole family in enjoying the lunch experience.  An extra topic of conversation over lunch guaranteed.

So the starters came and the magician vanished.  I chose a game terrine with preserved apples and elderberry vinaigrette.  It was almost too beautiful to eat.  A rich long finish of game augmented the sweet tangy elderberry.  The starters were also accompanied by a choice of freshly made bread.  We favoured a roll with slow cooked nest of onions inside.  This worked perfectly with game.  Chicken fillets, goats cheese curd and 3 point garlic was subtle with good fresh chicken cooked simply, perfect for a youngster yet to try the steeper slopes of a menu.  The prize for ‘most delicate in show’ went to watercress pannacotta, pickled wild mushrooms and Twineham Grange, so perfect for vegetarians.  It was light, creamy and oh so subtle.  This was a very grown up plate of food that curiously, would be perfect for a child.

And as if by magic our magician returned to present the conundrum of coins in a bottle with a narrow neck, coins out of the bottle.  We all examined the bottle and coins.  None of us were any wiser.  The young assistant produced from his own hand not one ball as expected but two, then three, then four.  It is quite a powerful emotion, complete surprise in a seven year old.  He couldn’t stop talking about how HE had done the magic himself!

The sophistication of the mains impressed us all.  Roast topside of Dexter beef had the flavour length of meat well hung and came with giant Yorkshires, roasties and deep, rich red wine gravy.  A roasted mallard with poached pear and fondant potato and honey jus was the smallest of the plates but probably the richest.  Strong flavours that fought (and won) the battle with the miserable weather.  A trio of lamb had a real punchy shoulder a delicate and soft fillet and an earthy haggis.  Served with curly kale and a candied swede it was a complete meal in its self.  Totally satisfying with plenty of character in each cut of lamb, I particularly liked the haggis with that peaty smoke lingering long after the last fork full.

The menu on a Sunday comes in at two courses for £22.50 and three for £27.50 with a reduction for children under 12 to £10 for two or £15 for three.  On other days there are a la carte and tasting menus and a seriously interesting wine list.  Charlie Lakin has only been head chef for two years but has clearly made his mark making use of the superb local produce.

We squeezed in a couple of desserts.  A polenta cake with sea buckthorn curd and chocolate sorbet looked nothing like its description, I’ve never see polenta look so attractive.  It tasted moist and sweet with a terrific hit from the sorbet.  The textbook quince soufflé with a cunningly bitter bay leaf ice cream was so perfect it almost make me cry.  A completely symmetrical column with flattop, fluffy and gooey inside, I loved the ice cream simply as it dared to be different.  Forget subtle underlying notes.  This was very much bay flavoured and the better for it.  A cheese trolley was expertly maneuvered in my direction.  Some good, local well kept Kentish blue was my pick of the day.  Creamy and a rich yellow in colour it could be a good alternative to a Stilton at Christmas.  Not too heavy it came with grapes and crackers.

Mike appeared for the last time to enchant us with his particular brand of prestidigitation.  An imaginary pack of cards was opened, shuffled and cut.  Then one selected and the card noted privately by my teenage son.  Handing back the imaginary pack back it suddenly appeared as a real pack.  By this stage we were hypnotised.  The pack was opened we were told there would one card facing up.  Asked what card he’s chosen (Ace of Spades) the pack was spread out and there it was.  The only card facing up was the Ace of Spades.

There certainly is some kind of magic going on in this corner of Kent.  I’m not sure where the force is strongest, in the kitchen or in the dining room.  Either way if you visit, you are bound to fall under the spell of the Marquis at Alkham.