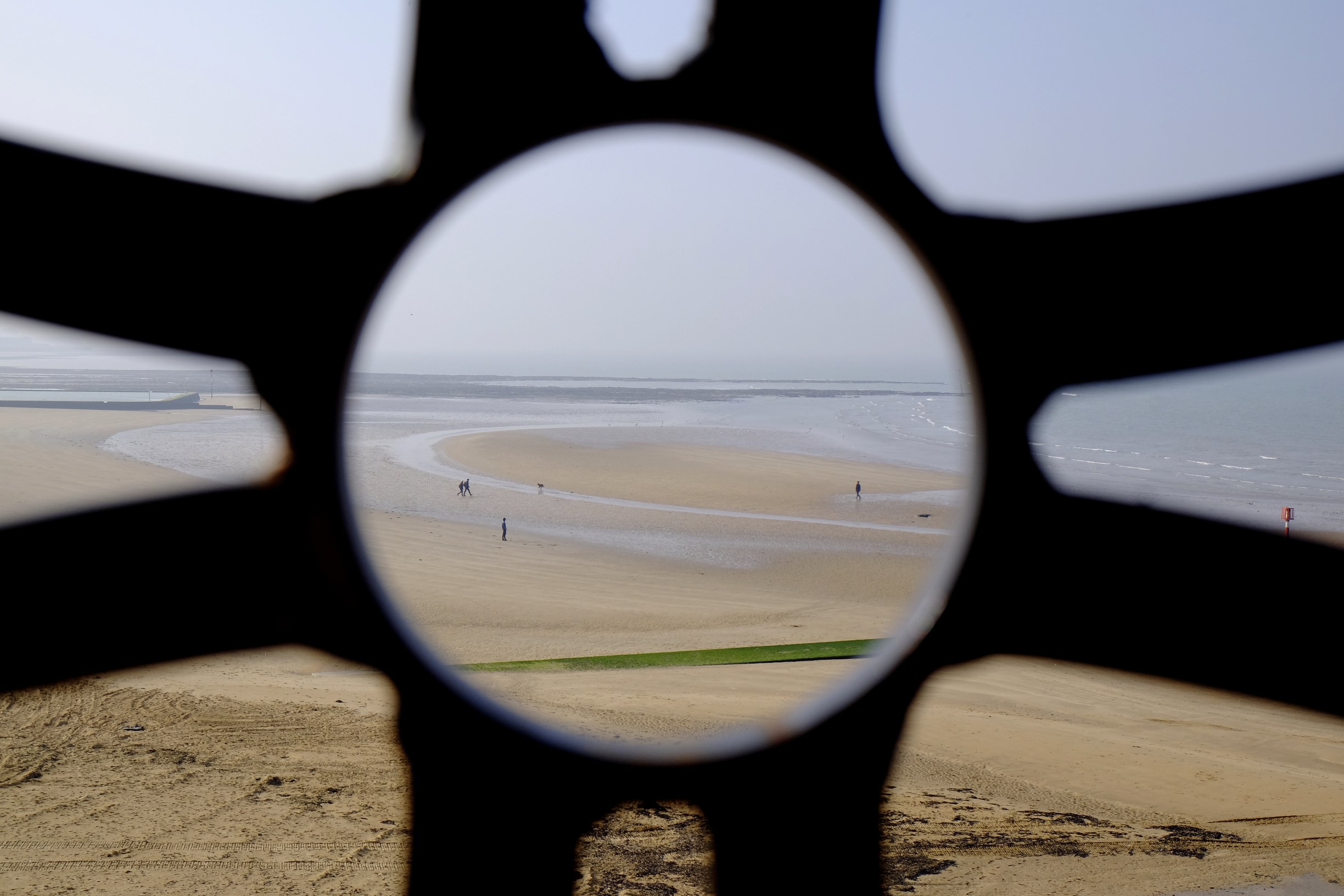 A trip to the seaside is one of those evocative phrases that we all have our own version of.  As a child I spent quite a bit of time at West Wittering near Chichester on the south coast.  Sometimes I was bored or too cold as I listened to the tiny transistor radio pressed against my ear waiting to hear the latest rock sounds; little did I know at the time that Rolling Stones lead guitarist lived in West Wittering, that would have livened things up a bit! 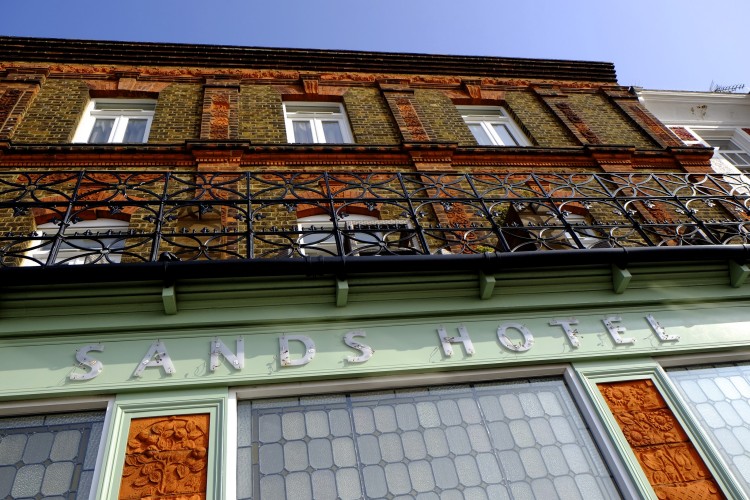 My children have had the pleasure of visiting Margate over the years as it’s quite close to our patch.  We have followed the tradition of southeast Londoners driving out to north Kent in all weathers to enjoy the vast beach there.  I thought it was about time I paid a visit to good old Margate or as some would have it Shoreditch-on-Sea.  It has become that trendy. 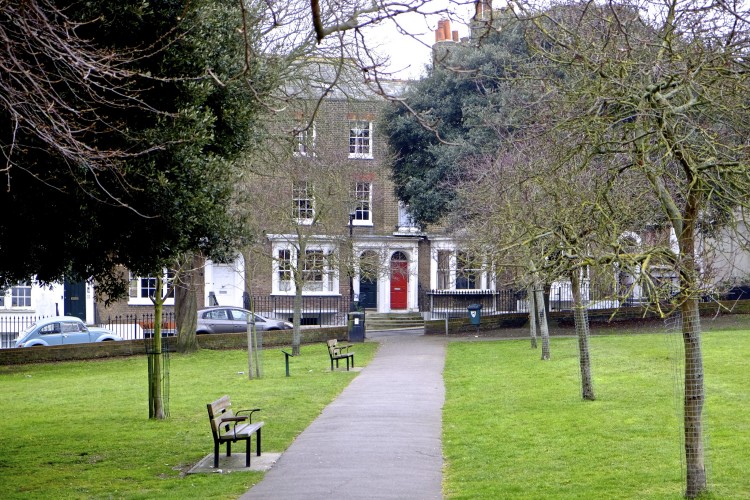 This is one of the new breed of chic boutique hotels breathing life into what was once a tired seaside resort.  I’m in room no.1 it is vast and has a balcony that J.M.W. Turner would have willingly paid extra for (there is room for an easel).  The sunsets are perfect, the staff obliging and helpful and the food is pretty good too! 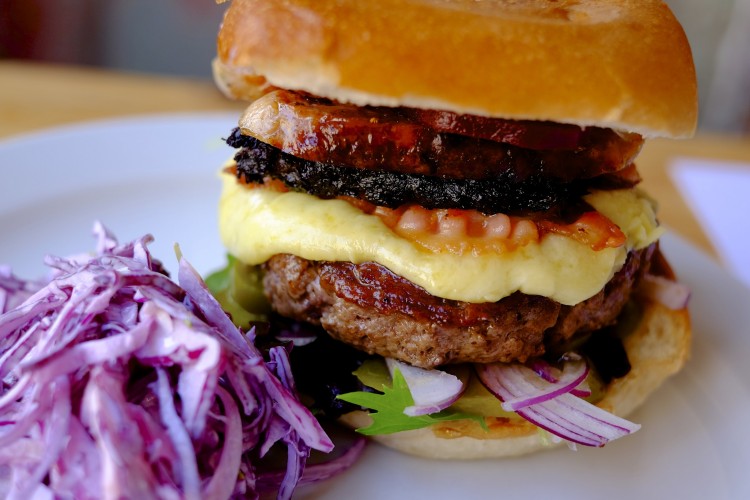 After settling down I felt peckish and decided to visit The Greedy Cow, which sits in the heart of the rejuvenated Old Town of Margate.  It’s one of the new start-ups that are getting this town all the attention.  They do a roaring trade in well-cooked simple dishes including breakfasts, lunches and malted milkshakes.  My ‘Gents’ burger has a whole fridge of ingredients.  I’m going to list them because it’s incredible they managed to fit them all in: Homemade 100% British Beef Burger, Streaky Bacon, Pork and Fennel Sausage, Black Pudding, Melted Cheddar, Baby Leaf Salad, Tomato Chutney, Pickled Gherkins, Red Onions, and beetroot.  Phew!  Served with a freshly baked bun and a side of Coleslaw and the option of jalapenos for an extra 50p, it was a fantastic burger with a suite of flavours and textures. I would categorise it as a super burger in every sense. 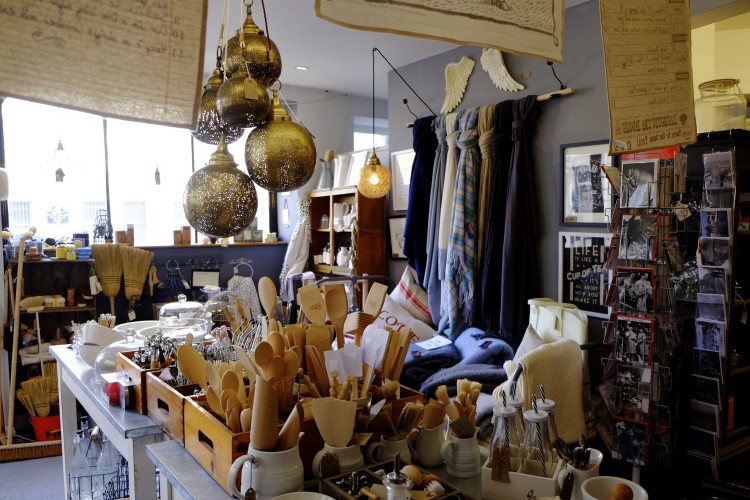 The Old Town is an enclave of historic buildings that now boasts antique shops, cafes, bars, restaurants and quirky emporia including the excellent Book Shop, a goldmine of interesting antique imprints that occupies the corner site of the old Midland Bank.  You’ll also find the Margate Museum full of curios, it is the bridge between the old and new Margate.  One of my favourites is The Shop 4/5 Market Place where you will find a myriad of traditional cooking and household items from yester year.  It’s vintage without being twee. 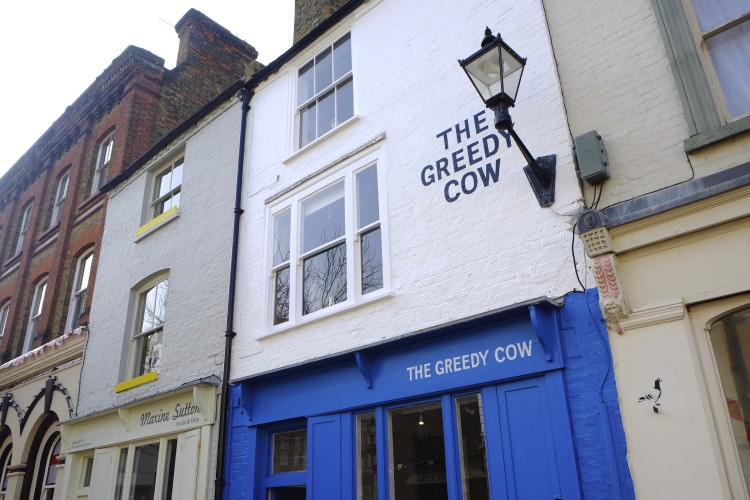 The sands on the famous beach are being smoothed in preparation for the new season of holidaymakers.  It’s hard to imagine over 50 years ago those defunct tribes the Mods and Rockers harnessed battle on the beach here at Margate.  The bank holiday hoards still come of course but are more likely to be fighting for a better view at the new Turner Gallery that commands a dominant position overlooking the beach and town.  Offering a smorgasbord of art opportunities to be involved in art (they currently run still life classes in the afternoons).  There is a self-portrait by Turner on display.  It’s tiny but part of the exhibition entitled ‘Self’.  In this era of the ‘selfie’ the gallery has stepped back to look at the painted variety of selfie.  From Van Dyck to Hockney it’s a large collection worth looking at and it’s free! 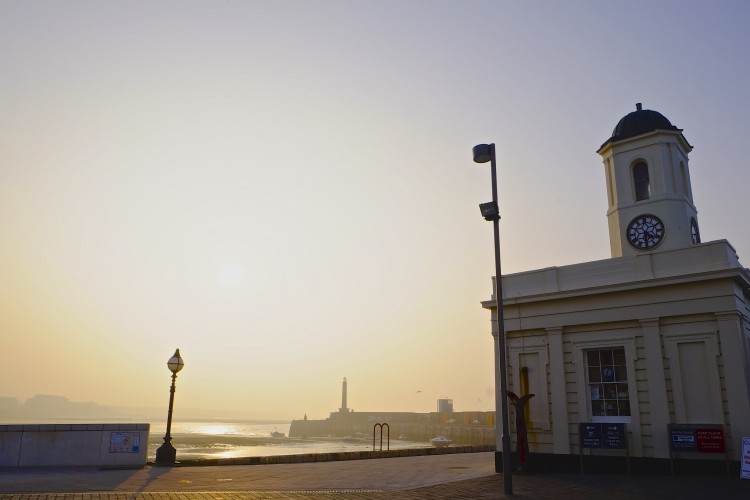 There’s something for children as well, in the vast reception area is an instillation by Mexican Carlos Amorales, made of cymbals suspended in the form of a giant mobile.  Visitors are encouraged to bash away at the cymbals and experience the reverberation.  Quite a noise indeed! 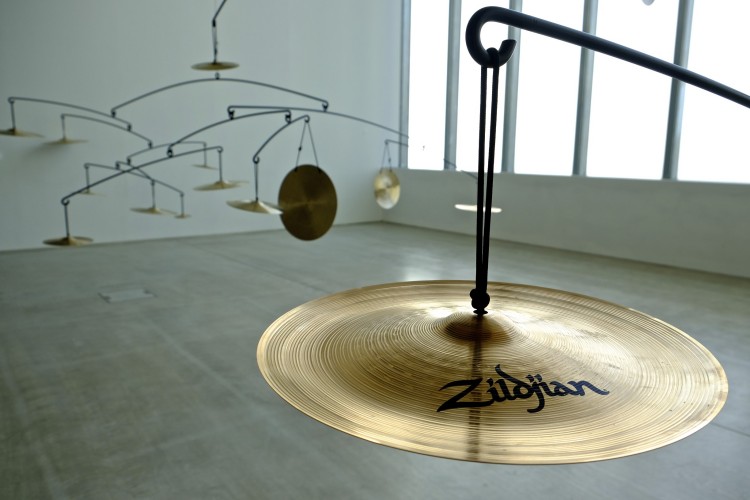 The Sands Hotel was never meant to be a hotel.  Starting its public life on TV’s Homes Under the Hammer it was bought at auction by a local property developer who originally wanted to create luxury apartments with spectacular views across the bay.  Aimed at catching the wave of regeneration it became an upscale boutique hotel with 20 rooms, many with sea views. 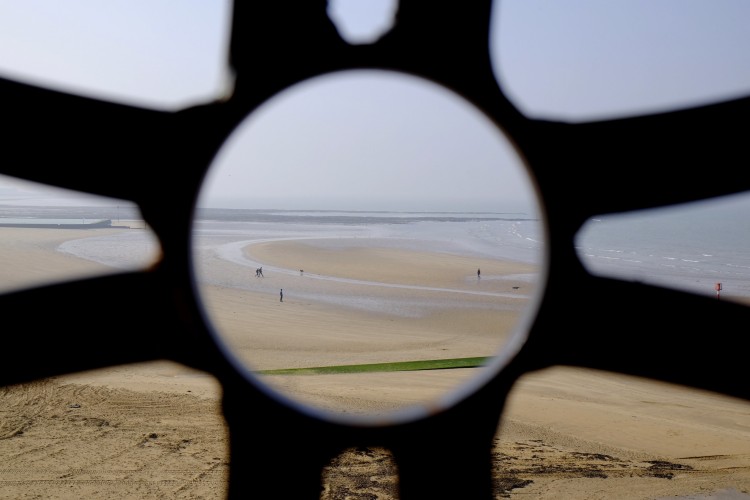 The hotel offers a lot of space and the perfect classy location to discover more of this beautiful corner of Kent.  With Broadstairs and Ramsgate within a few minutes drive you are spoilt for choice with award winning restaurants like The Corner House and The Ambrette both worth checking out for excellent fare and charming service and the newer Saltwood on the Green in Saltwood. 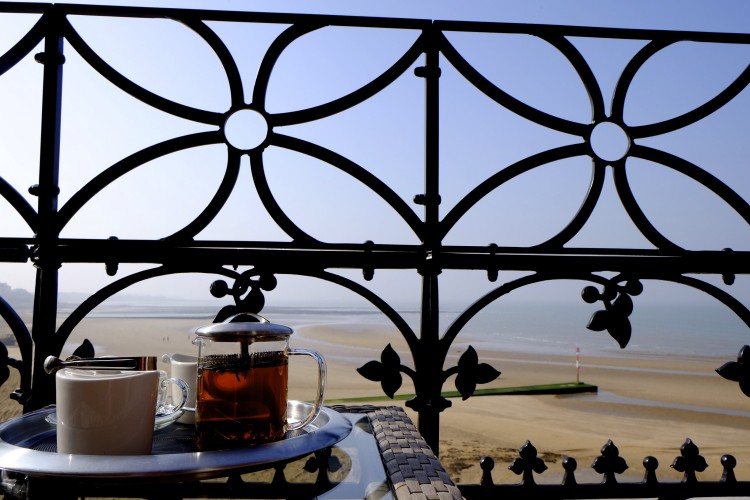 I decided to take in the views from the hotel’s restaurant and have dinner looking out across the sea as the sun passes over the yardarm for another day.  Kayleigh who looked after me was charming and knowledgeable about the food on offer has been working at the hotel since it opened just under two years ago.  Along with all the staff I encountered she more than once talked of working where you get the best sunsets in town.  She’s not wrong and I can see why she likes it here, it’s very relaxed and unlike London but not slow.  They have that right measure of attentively looking after you without crowding you. 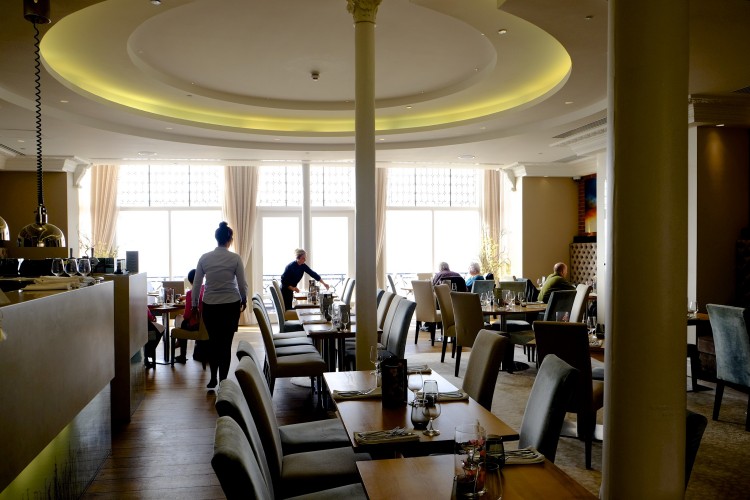 My ham hock and hazelnut reubens starter was a surprise at it was in a crispy batter.  It tasted delicious, made using locally sourced produce.  The main, a roast rump of Sussex beef, spinach, foraged mushrooms and roasted shallots had been perfectly cooked (medium rare) and came with perfect dauphinoise potatoes (one of the best ways to most men’s hearts!). 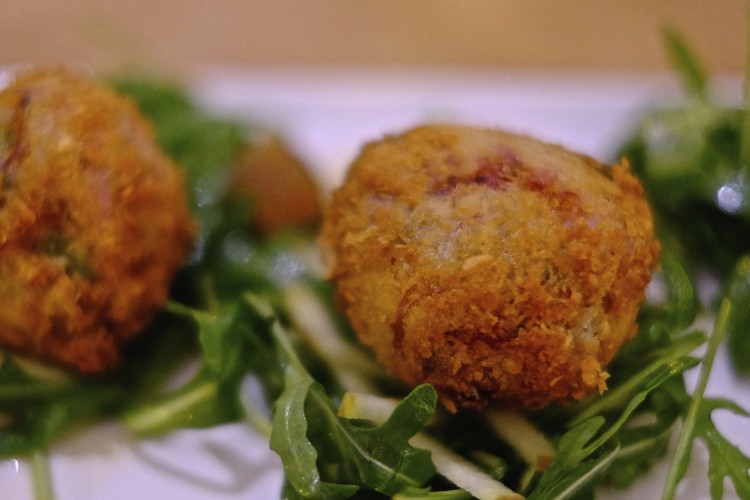 As the sun sank and the light dimmed a few muffled laughs from the bar wafted over and the gentle hum of the restaurant didn’t overpower the soft music playing in the background.  A local cheese course was welcomed, perfect room temperature and well looked after. 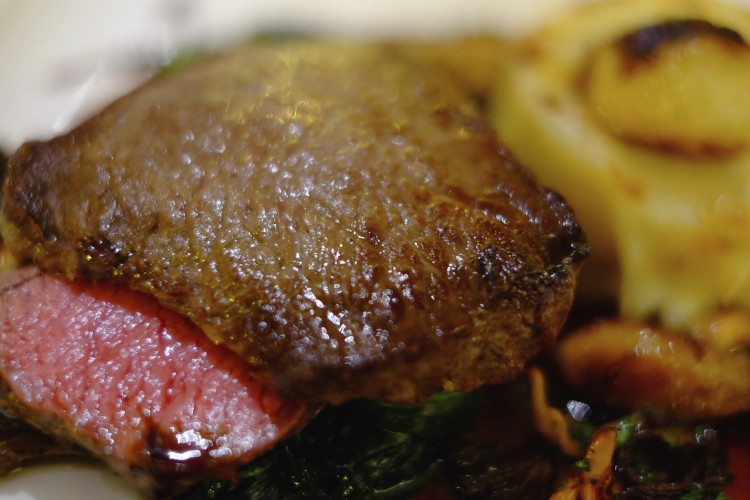 Kayleigh wondered if had any more room.  I confessed a curiosity about the rhubarb crumble soufflé.  Her eyes lit up as she said it was delicious.  Again, she was right, it was and proved to be the undoing of a recent bout of ‘watching what I eat’.  Oh well, it was worth it, well made with light fluffy moments punctuated with just a little bit of crunchy crumble.  An unusual take on a soufflé that I would try again (and again!). 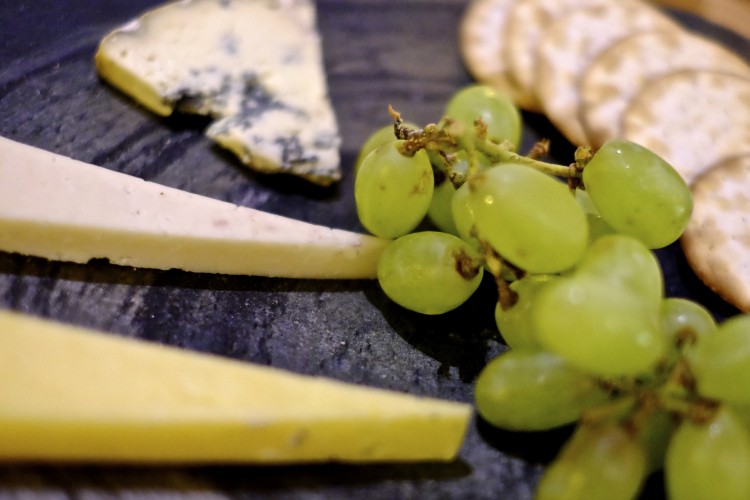 Margate is a town that has kept on giving over the years.  It is said it’s the original seaside resort, it was the first beach to have donkey rides, a right of passage that my children have enjoyed over the years.  Falling on leaner times over the last decade or so it now seems to be a phoenix on the east coast.  Dreamland, the old-school amusement park from the twenties is set to reopen later this year, refurbished, which will offer nostalgia for some and a whole new way of experiencing the seaside for the younger visitor with rides from every decade since it opened. 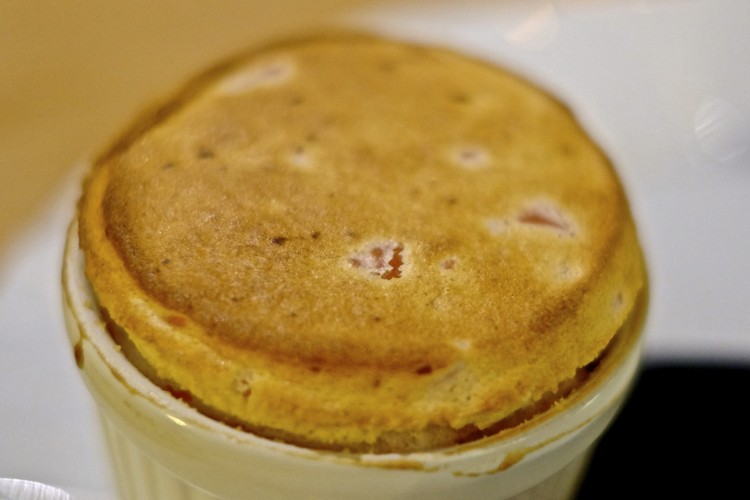 On my drive back I called into Jason Freedman’s new enterprise Curiously Kentish, a deli like no other.  Jason owns the nearby Minis restaurant in Minis Bay.  Also located in Minis the deli smoke and hang their own meats and fish as well as making sauces and oils.  With only three tables you’ll have to be quick to sit down at lunch but you should try, as the prepared foods onsite are wonderful.  I stocked up on bit of their cured venison. 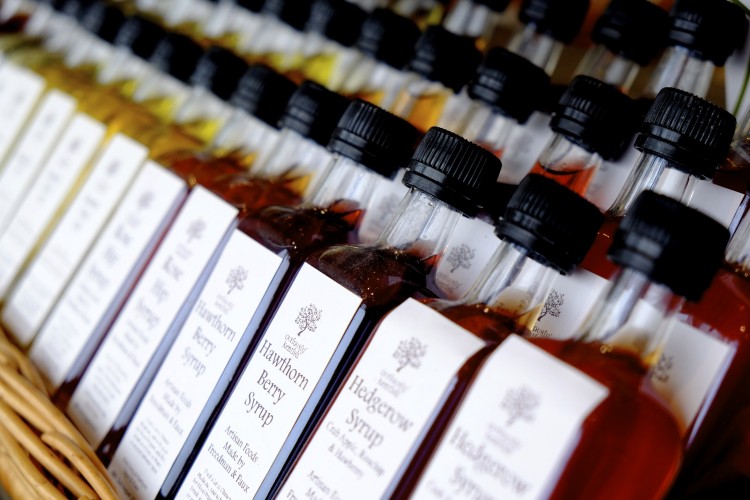 I do like Margate and it’s so easy to get to from London, it was great to visit again.  Is it Shoreditch-on-Sea?  I’m not sure but for me it really is the best place to be beside the seaside. 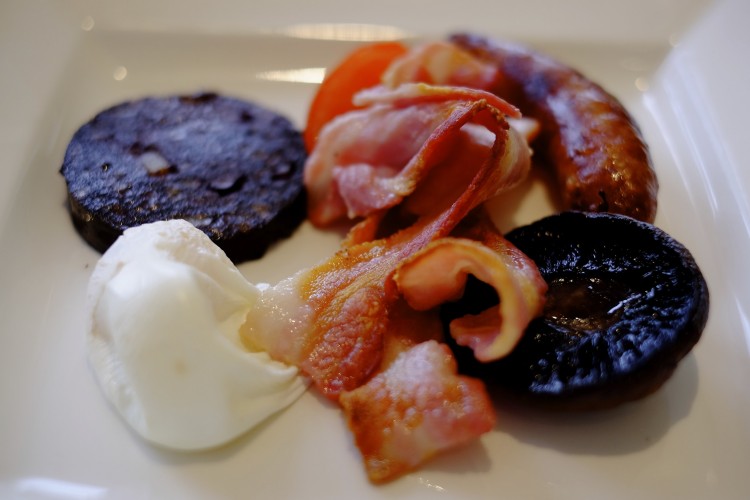