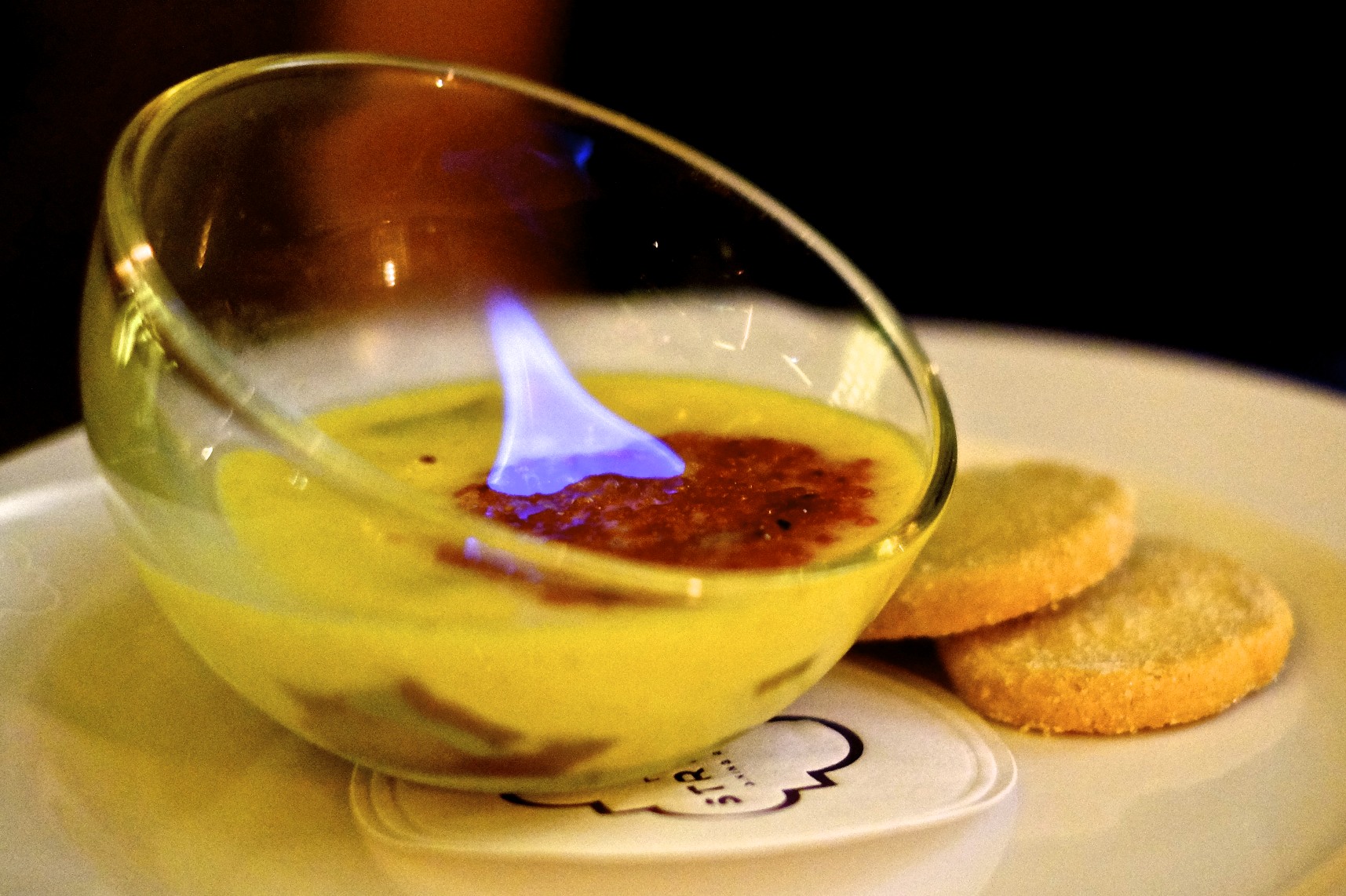 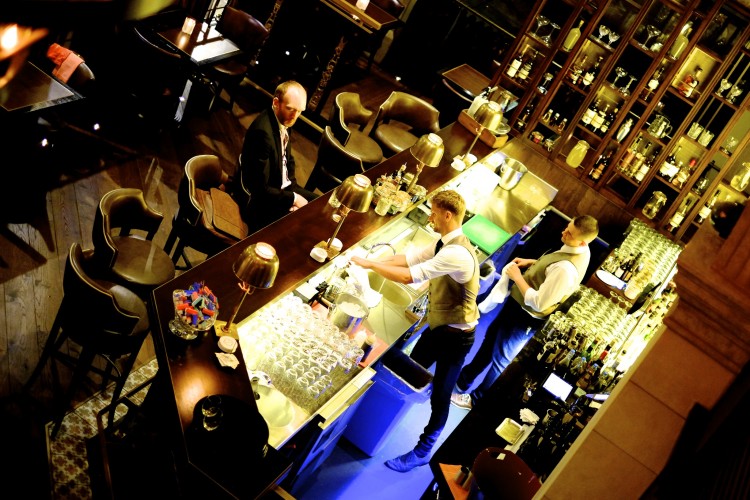 With the appearance of a rather wide old Pullman train carriage and a bar on the left and seats on the right I felt at home straight away as I walked into The Strand Dining Rooms. Sure, it doesn’t rock from side to side as you commence your journey but it does offer a kind of snug refuge from the busy West End, all is low lights and calm in here. 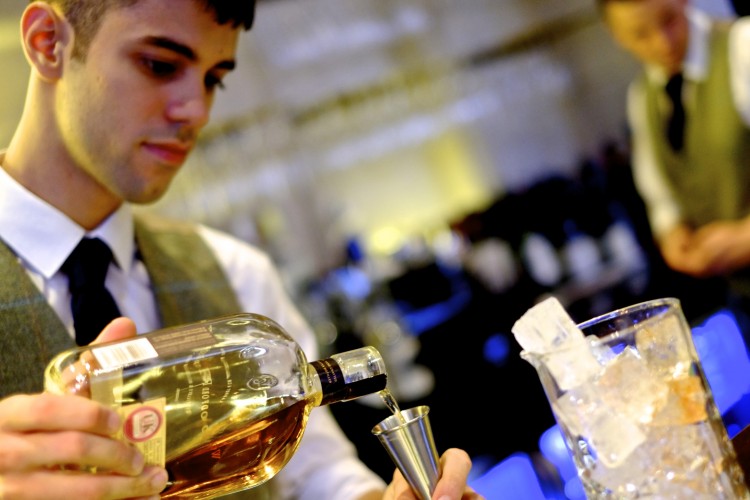 The Strand Dining Rooms is making a stand for old-fashioned dining, it wants to give the impression it has been here for years and that it has taken the lead on Simpson’s on the Strand. It hasn’t, but I think that is a good thing. Restaurants with similar aspirations might be The Delaunay or even The Wolseley of Corbin and King fame. Their string of classy bistros and restaurants has been a breath of fresh air to the London scene. I feel that The Strand Dining Rooms will do the same in time. 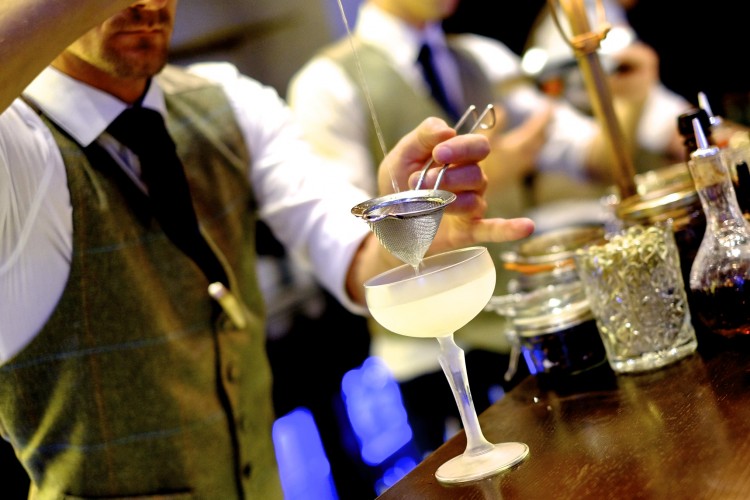 It’s early days for them and they might have to tweak things a little and trust their instincts. The music they play in the background has no real theme or function so drop it. It is quite intrusive and not necessary. The food on the other hand is mainly full of hits. The menu hints at longevity, daily specials yet to become institutional and also chef’s specials that are not on the menu. Ask about these, I did and didn’t regret it. 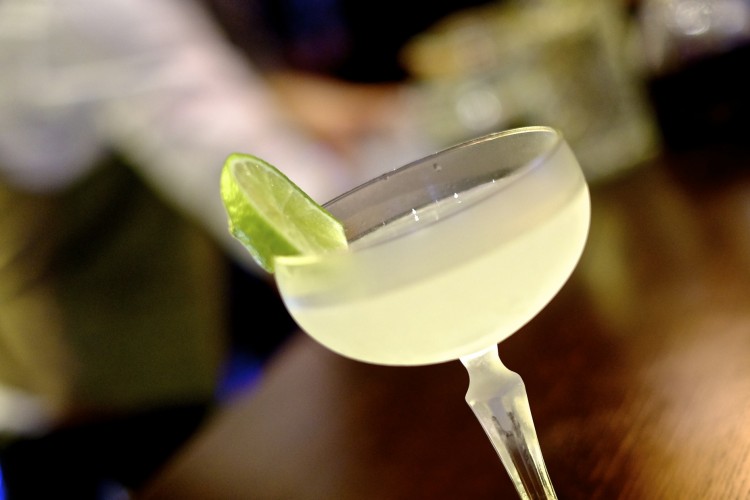 My dining companion C is in the food business, she has opinions that are strong and direct. Thankfully she expressed them to me and not the staff. She didn’t like the checked/tweedy waistcoats the staff wore citing that tweed is daytime attire. I’m sure she’s right (she’s from Chelsea and is bound to know these things) but I thought they looked rather fetching and unifying. The barmen were all very happy and pleased to be wearing them. They added an air of professionalism. 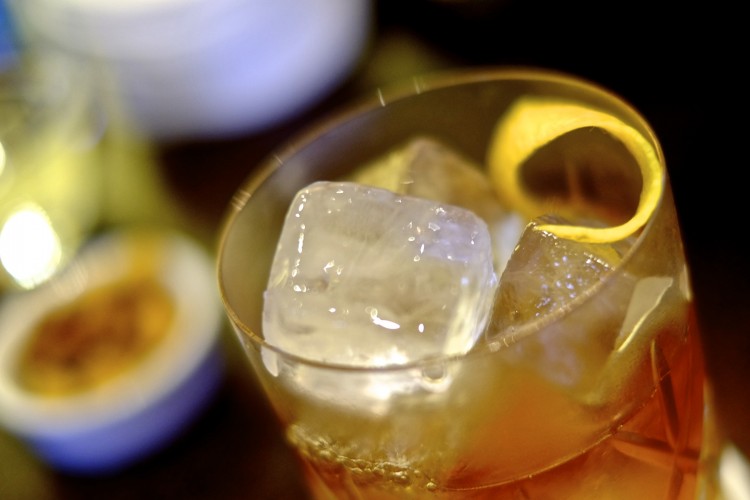 The place is a bit of an ice-burg in that it is enormous once you walk through the initial ‘tip’. Seating up to 200 diners it must get the day-trippers in to make it work. There are booths and quiet corners as well as the bar area which stocks an impressive list of whiskeys and spirits. They also have a bar snack menu that I will try next time I liked the sound of spice black pudding balls and bacon scones with smoked cream cheese. 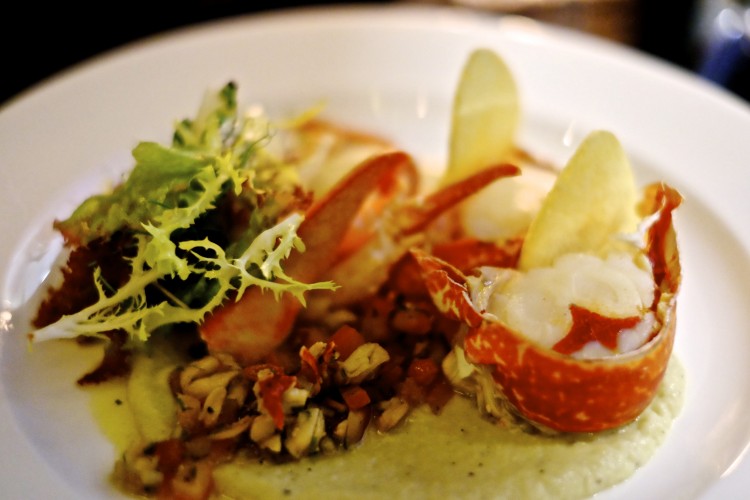 C had chosen a Margarita and I an Old Fashioned. Both were mixed with aplomb and a certain amount of theatre, no bad thing in a cocktail bar. They tasted wonderful. We moved over to our booth and perused the menu. Imran our waiter couldn’t have been more helpful and explained the chef’s specials. I couldn’t resist a warm lobster salad and C chose heritage beetroot salad with Fletcher’s Berkswell cheese. My salad was great, fresh lobster in generous proportions. C was less happy with her salad thinking the choice of cheese was wrong. Fletcher’s is a hard rind ewe’s milk cheese and C thought it should have been goat’s instead. She had a point it didn’t quite cut it for me either, not enough sharp acidity. 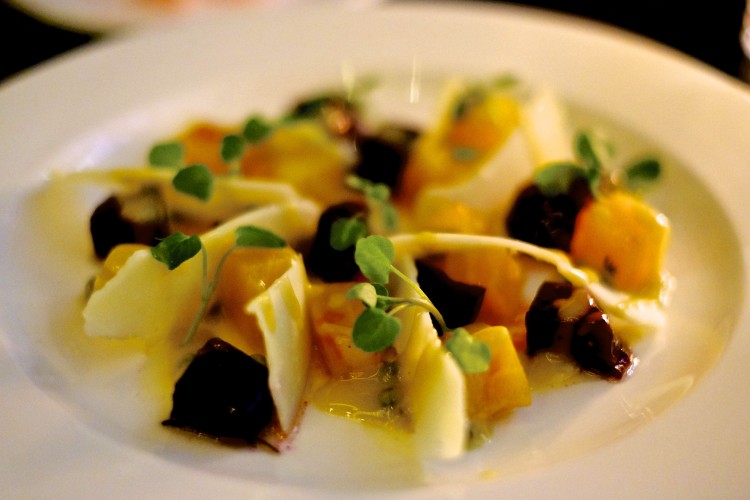 Back to the chef’s specials again this time C was tempted by the Jacobs ladder slow cooked beef. I elected to try the chef out on that tricky dish of rack of lamb and a slow cooked shoulder with artichoke, broad bean and cherry tomato salad. A few sides tempted us too. The spinach was blitzed and very creamy, the tomato salad worked for me, and the triple cooked chips where very, very good. My lamb was pink perfect and full of chunky flavour from the shoulder. C’s beef was a triumph of densely and taste that can only obtained by slow cooking and a good jus, the polenta it came with was not dry and let the beef shine. 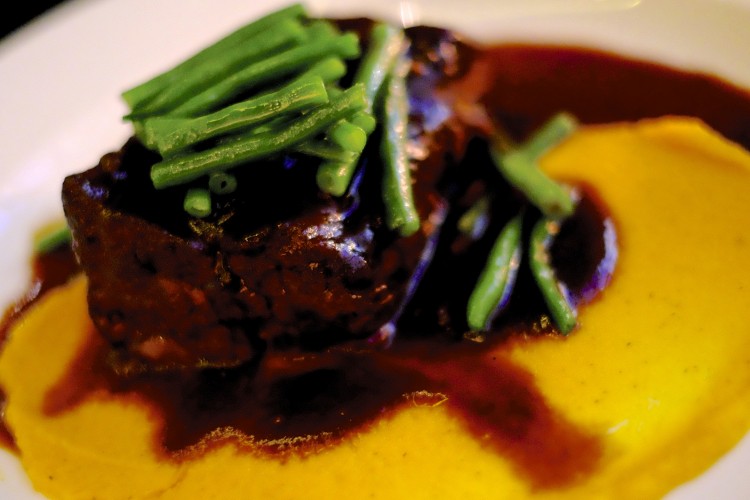 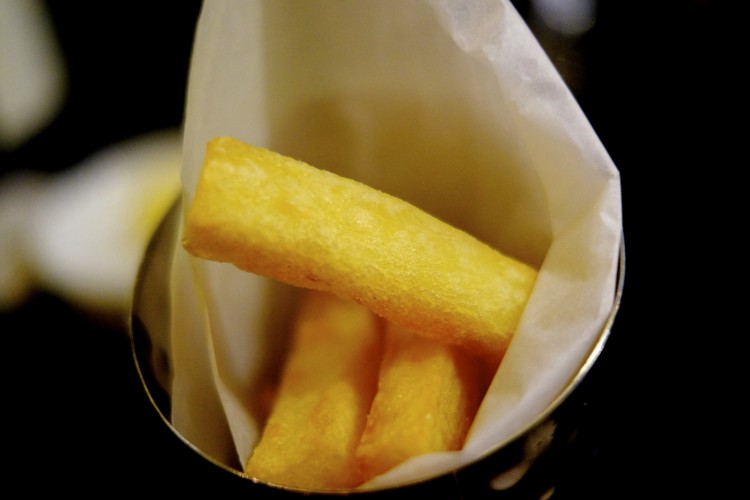 Along with the other members of staff Imran was excited and proud to be working in a brand new restaurant. They have a mezzanine level, which is hard to see at first as it blends into the scenery rather well. It’s a cosy space that can be hired out for private parties or big breakfasts with colleagues. Yes, The Strand Dining Rooms are open all day, from breakfast to late night and they even provide afternoon tea. 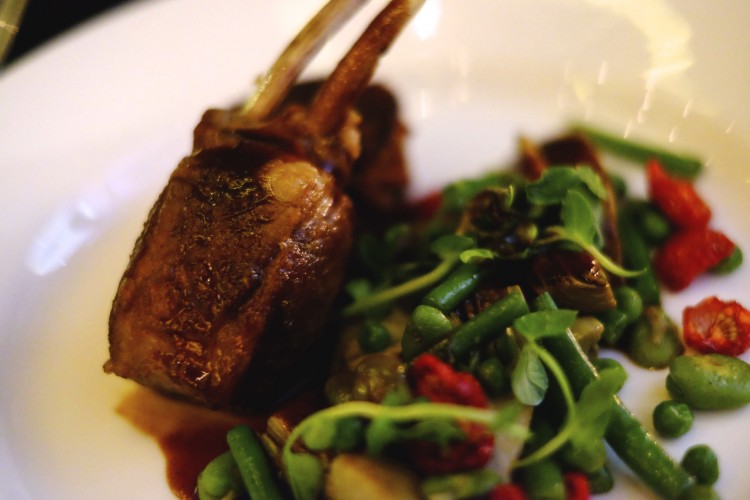 Desserts arrived and although we were full we managed to make a dent. C chose rhubarb egg custard with shortbread on the side. It was presented in a spherical glass orb tilted on its side and a brûlée topping that was alight for a few seconds inside the bowl. It looked rather unusual and had both sweetness and a tartness that should be there. My glazed lemon tart with a delicious raspberry sorbet proved too much for me and I was unable to finish. No reflection on the taste just my previous gluttony. 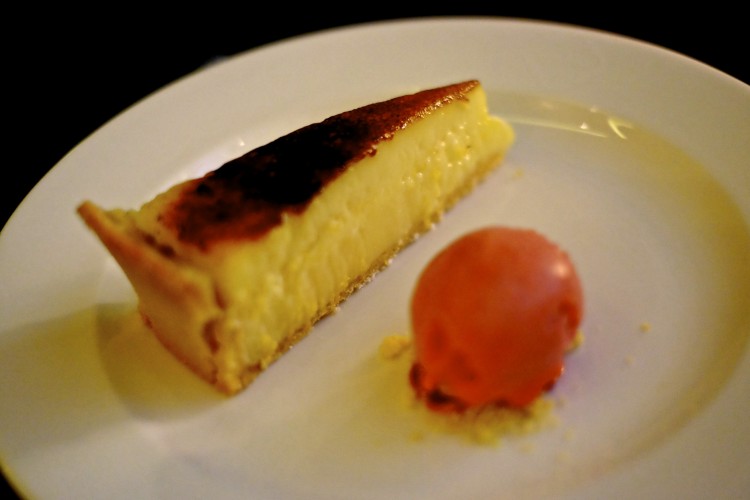 The Strand Dining Rooms will work out fine I think. It is within a stones throw of Trafalgar Square and the National Portrait Gallery, offers good food and comfortable surroundings and competent staff who are charming to boot. The only significant change I’d make is to give the music the heave ho. It doesn’t add anything useful and will I feel retard the growth of the restaurant as it makes its name and builds a following. 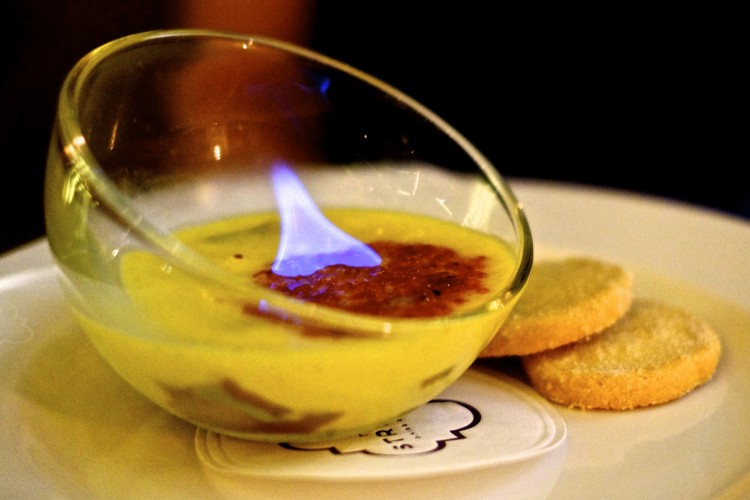 So my advice would be to check it out and if you were feeling a touch trepidatious, then how about just a cup of tea and a cake? C, who is very knowledgeable about afternoon tea (she lectures in the subject) curiously didn’t have anything to say about their broad selection of teas available. Maybe The Strand Dining Rooms have reached her high standards in their first month. I hope so; if they haven’t then I’m sure she’ll have something to say about it. 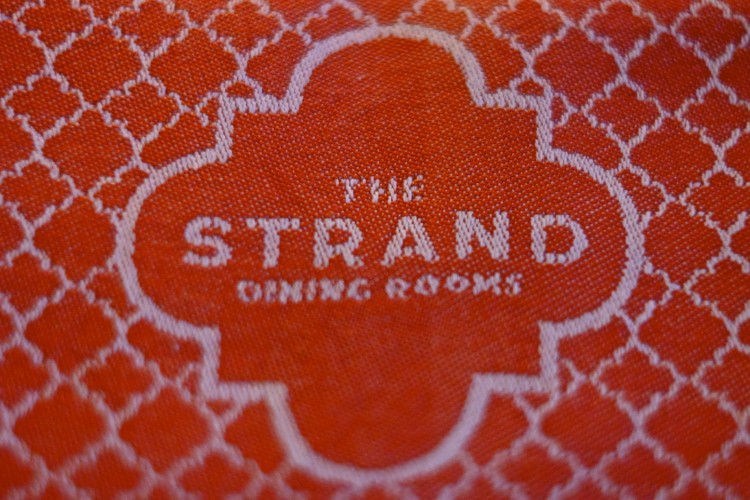