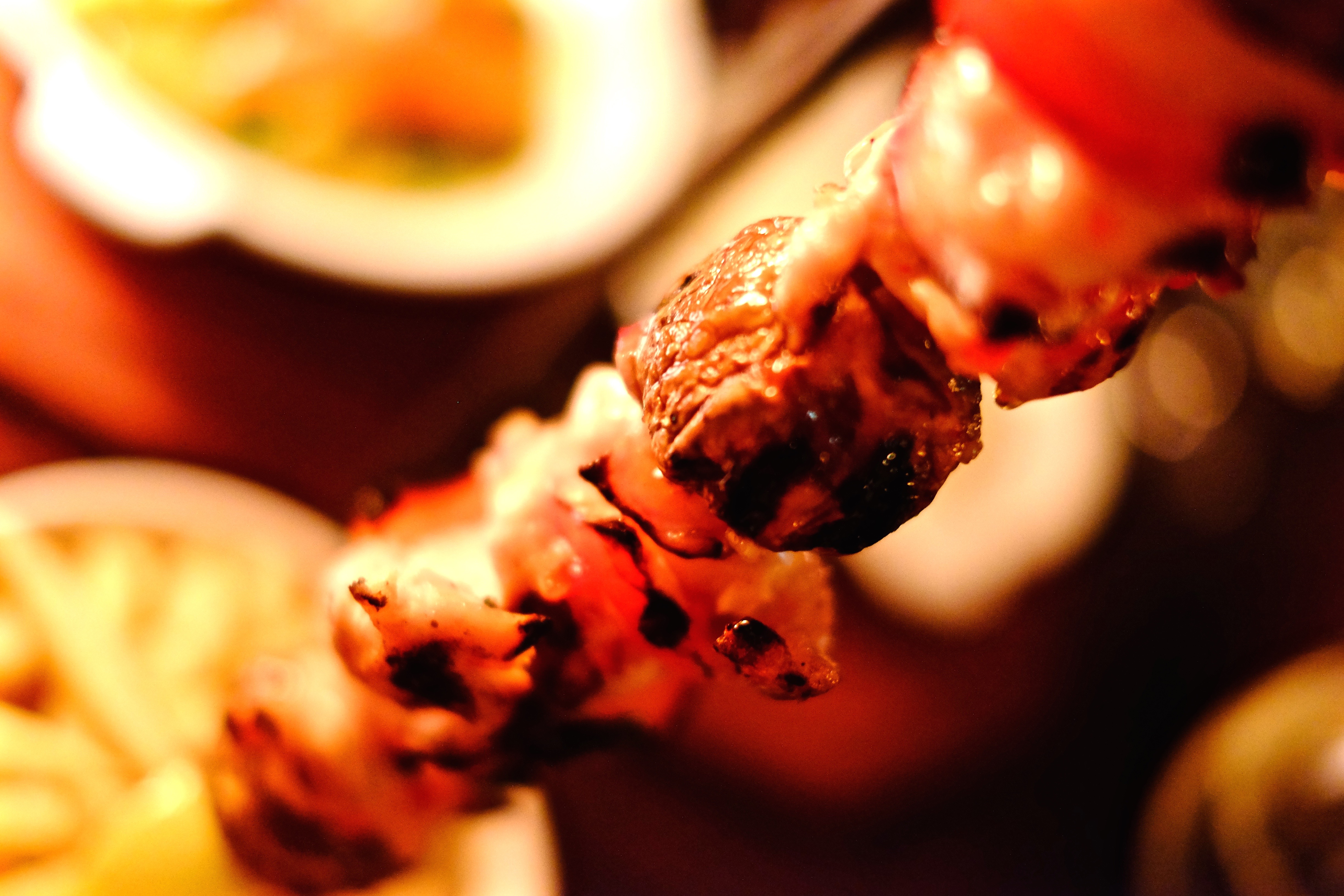 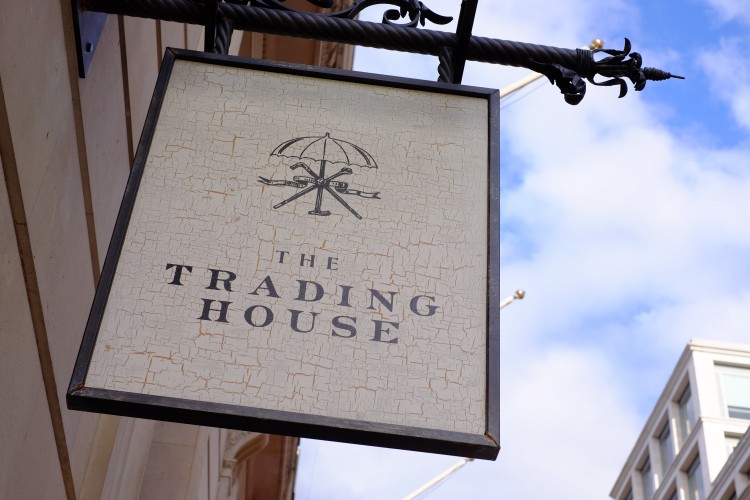 This much talked about restaurant with live music and killer cocktails has been on my hit list so I was really looking forward to eating there. One problem, my dinner companion was J, she of the late timekeeping. Could this make or break a friendship, could she get to the restaurant within an hour of the agreed time? Time as they say will tell. 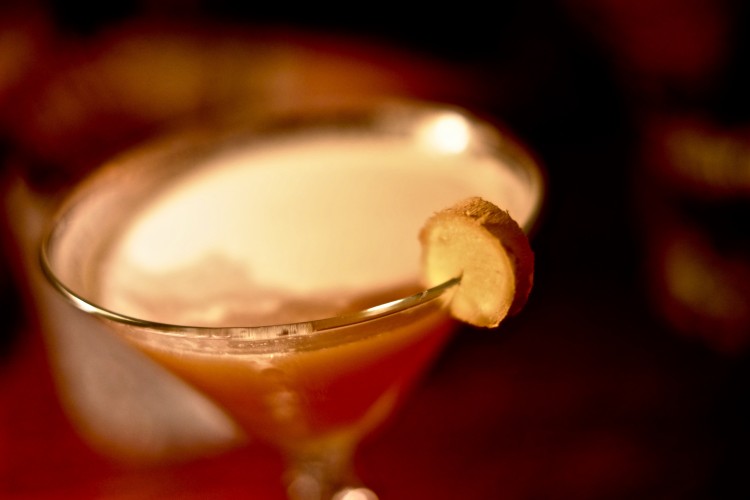 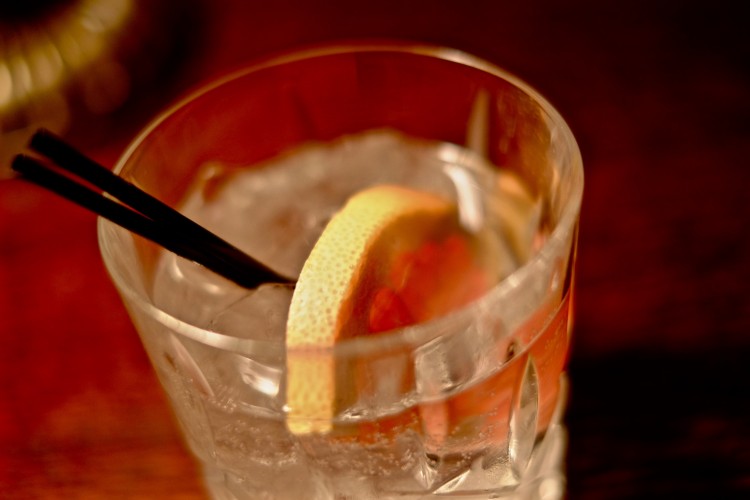 During the day of my visit I received a curious email from J. ‘Could we make it a bit earlier tonight’ it read. I looked again to make sure I had that right. As much as an hour was being asked for. I replied that a half an hour would be OK for me. J seemed happy with that. In the back of my mind I was thinking this is some sort of revenge for my last review where I pilloried her relentlessly about shoddy timekeeping (although she did have a valid excuse and was very sorry about being late) All in the name of good fun you understand. 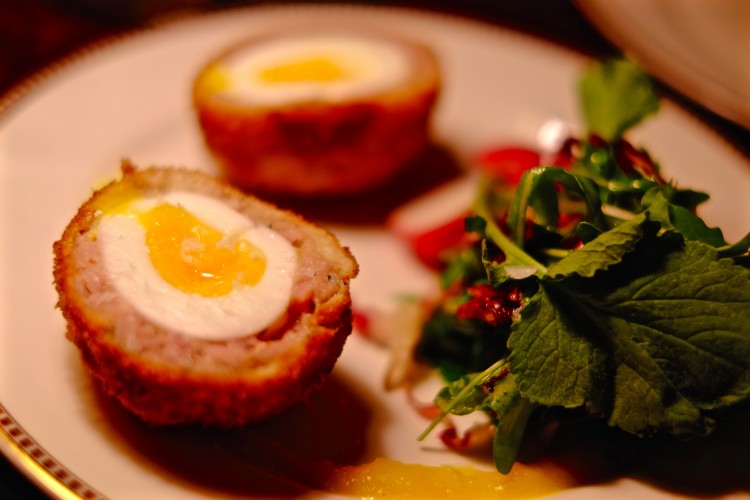 I was certain that I was not going to be late myself so left early. Passing many homeward bound city folk on my way to Gresham Street I found the address. It looked just like a bank. It’s no great surprise really that I discover it was once the bank of New Zealand. 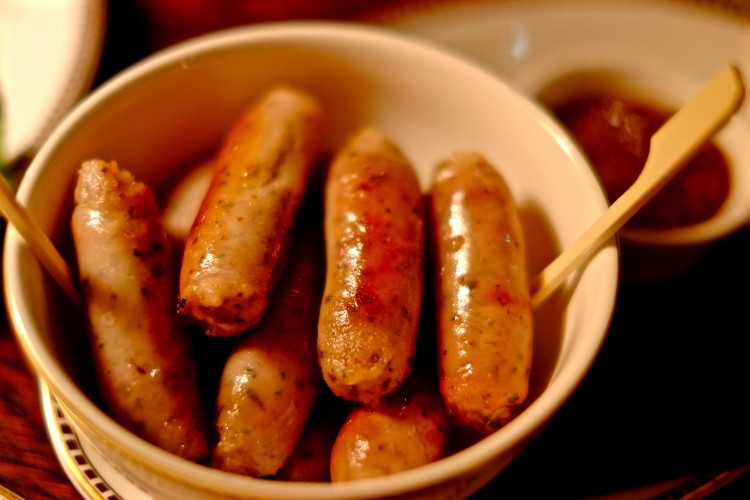 Inside the large panelled room it was really buzzing, there was a mezzanine level that supported a band and at the large central bar were silhouettes of barmen mixing cocktails. This really was my kind of place. 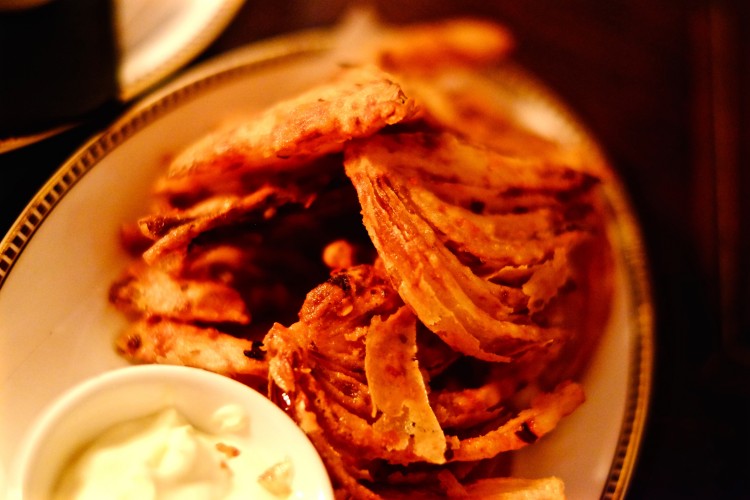 As I’m shown to my seat 10 minutes ahead of time who should be waiting for me with a grin that could outdo most of the cats in Cheshire, J of course. She cheerily states, “I arrived really early”. All is forgiven and the evening is off to a great start. 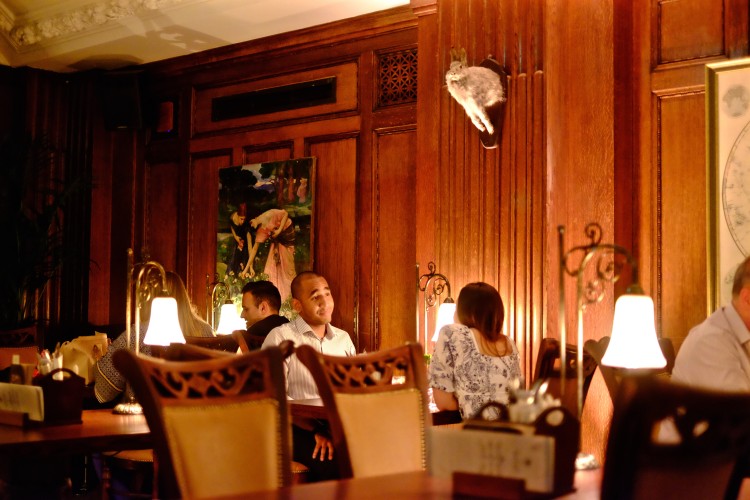 Magda our waitress was fun, friendly and just the right side of cheeky. The drinks list is long and they specialise in gin cocktails. J ordered a house special Artisan Gin and Tonic, I went for a variation on an Old Fashioned that had cardamom lurking in it somewhere. Both drinks pleased their new owners. 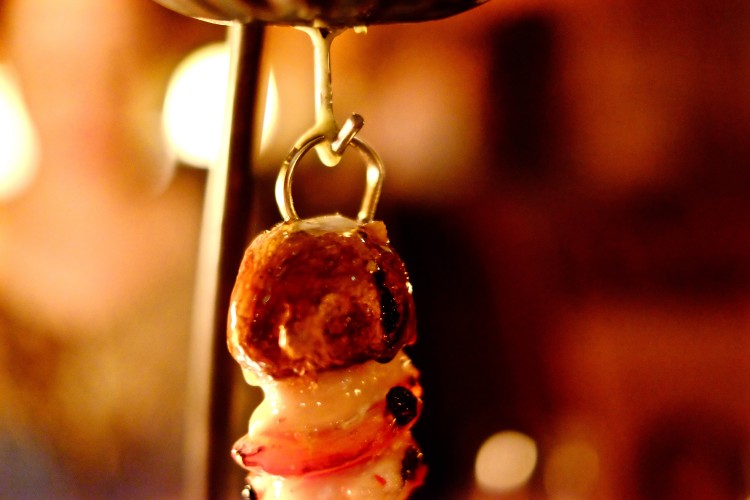 The menu, which is on a giant card, offers a lot of tradition in the form of deli board, rotisserie, a home comforts section and the too more exotic such as lamb tagine or sea bass with Piri Piri dressing. The nibbles and starters looked good. J, until now has harboured a secret love of Scotch eggs. So we ordered some of those and some small Cumberland pork chipolatas and a strange sounding salt and pepper onion petal. 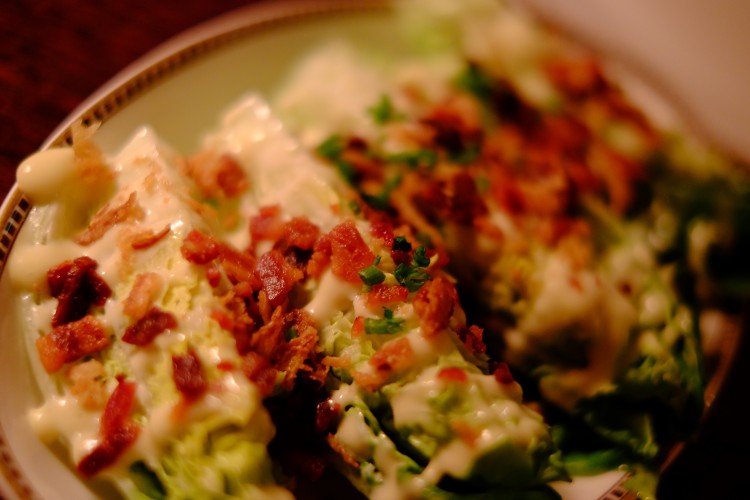 These were perfect nibble foods as we caught up with each other’s day. The mysterious onion petal was in fact a whole onion deep fried with a spicy coating and soured cream to dip. The egg and bangers were fab but we found the onion a little heavy going. 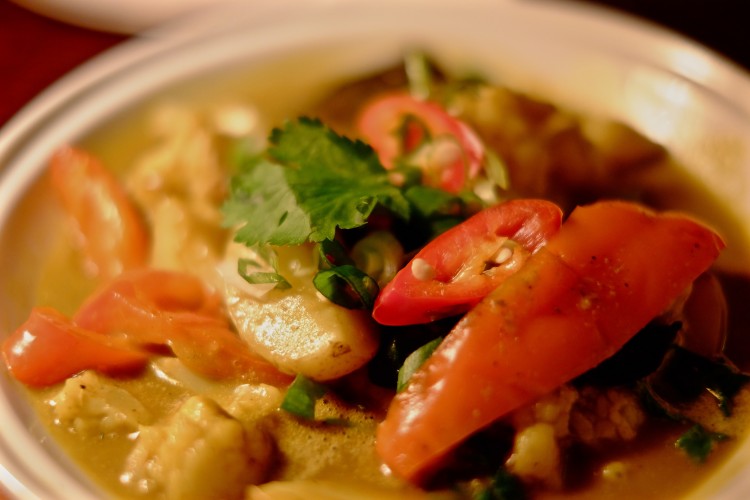 J found it hard to not mention timekeeping (hers, obviously) every once in a while. Credit where credits due – she was early, had asked for the time to be brought forward so had every right to feel pleased. 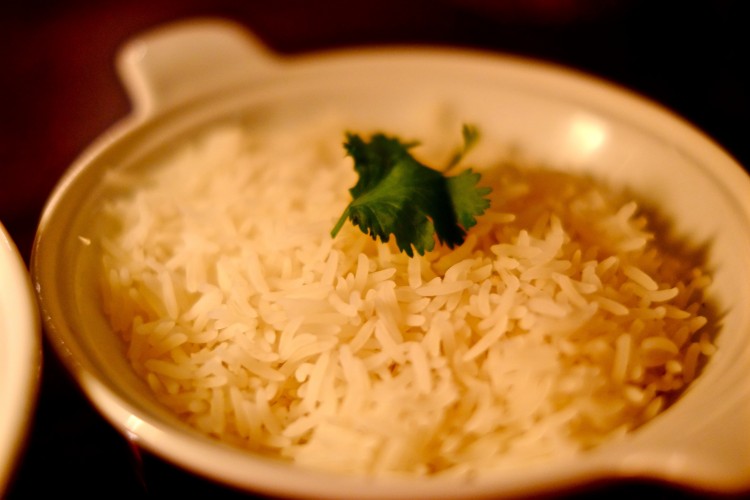 As I mentioned there is a lot of meat on offer here but that didn’t tempt J. She opted for a Malaysian vegetable curry with rice. This ‘light’ choice was a good one. The curry was distinctly Malaysian and light with crisp vegetables giving it a bit of body. They have on offer something I’ve seen in other countries ‘hanging kebabs’. I had to try one of those! You have a choice of meats or halloumi. I went for chicken. The skewered chicken arrives and the waiter pours garlic butter on the top, which drizzles down slowly. There was also a hint of chilli and ginger. The overall effect is not really Eastern but tasty all the same. It makes for a great talking point, as these things are giant. 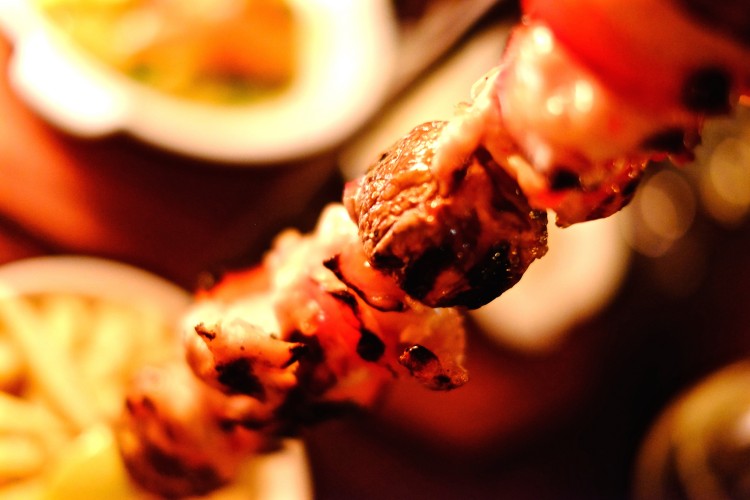 Magda had been at our beck and call all evening helping with and explaining our options. She was really good fun and enthusiastic about the food. I’d give her a pay rise if I were in charge. She is just the sort of waitress you want in a busy eatery where the senses can become a bit overwhelmed if you let them. 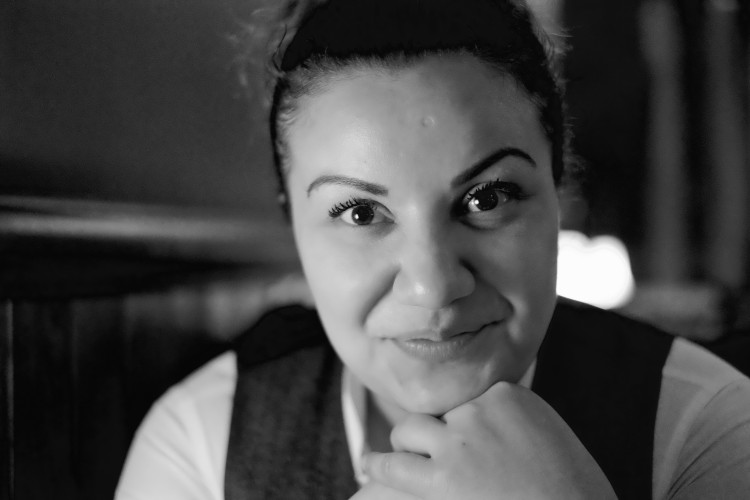 J’s second confession of the evening (not really a confession I guess but more of as state of mind) is that she is unable to resist chocolate when it is on the dessert menu. So with no surprise whatsoever she ordered warm chocolate fudge cake, which was augmented with vanilla ice cream. The cake was very good and rich – too rich to finish (I’d share with somebody if you order this, ask Magda she was really keen on it)! 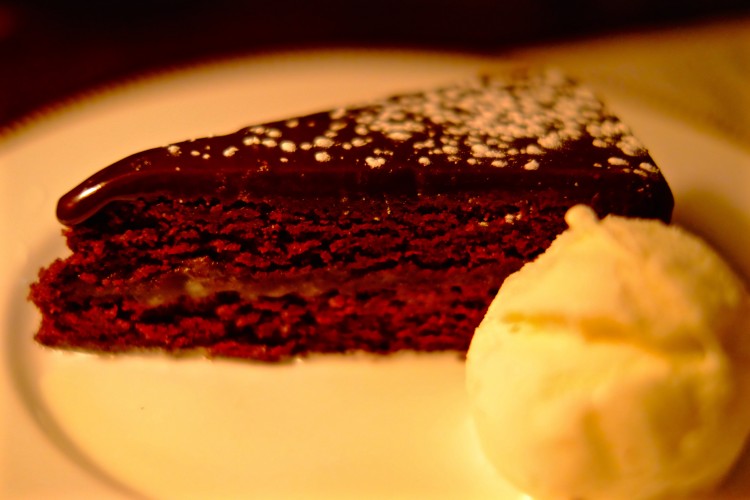 I went down a different road and ordered something J had never heard of, a rum baba. I don’t think I’ve ever met anybody who didn’t know what a rum baba was before. She clearly didn’t have an aunty Margaret who would visit on Saturday afternoons with a large white box from the cake shop dripping syrup and carefully open it up to reveal its hidden treasure. It was a textbook example of the patisserie’s art, soft pillow of sponge with sweet syrup kicked up its Middle Eastern backside with a shot of rum. Perfect. 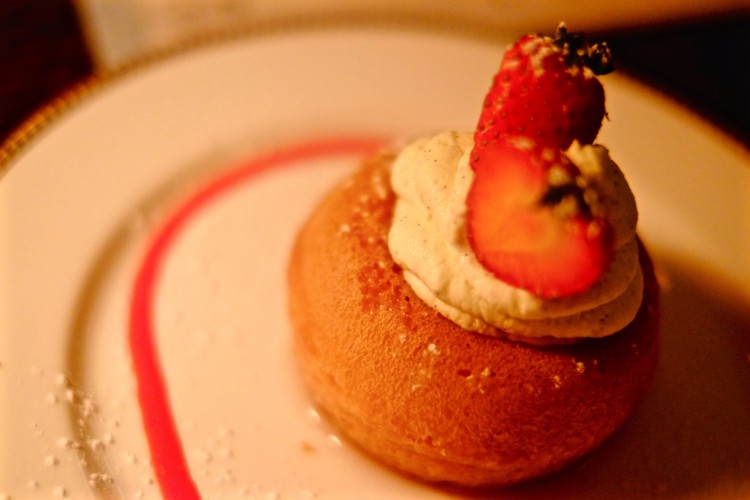 The Trading House is a cool, hip kind of place that J thought was very American (in a good way) and said, “It felt like a real night out” (this was on a Monday I hasten to add). She really liked the food and the atmosphere. I have a funny feeling that she also had a good evening because she literally made the most of it by being there not just on time but early. What are friends for eh? 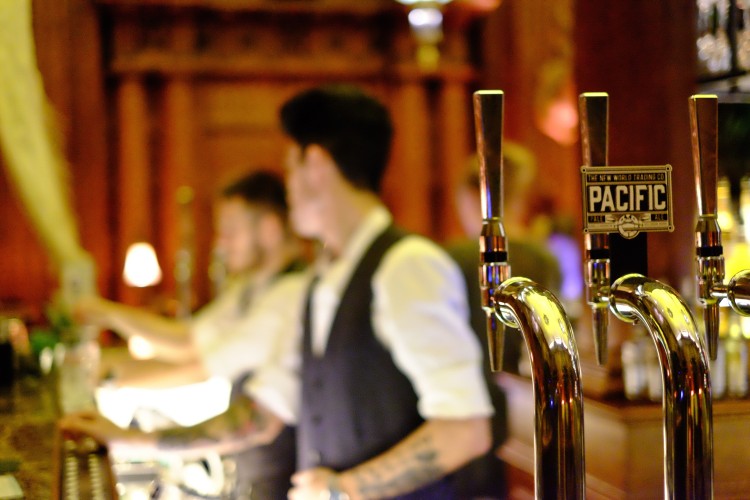