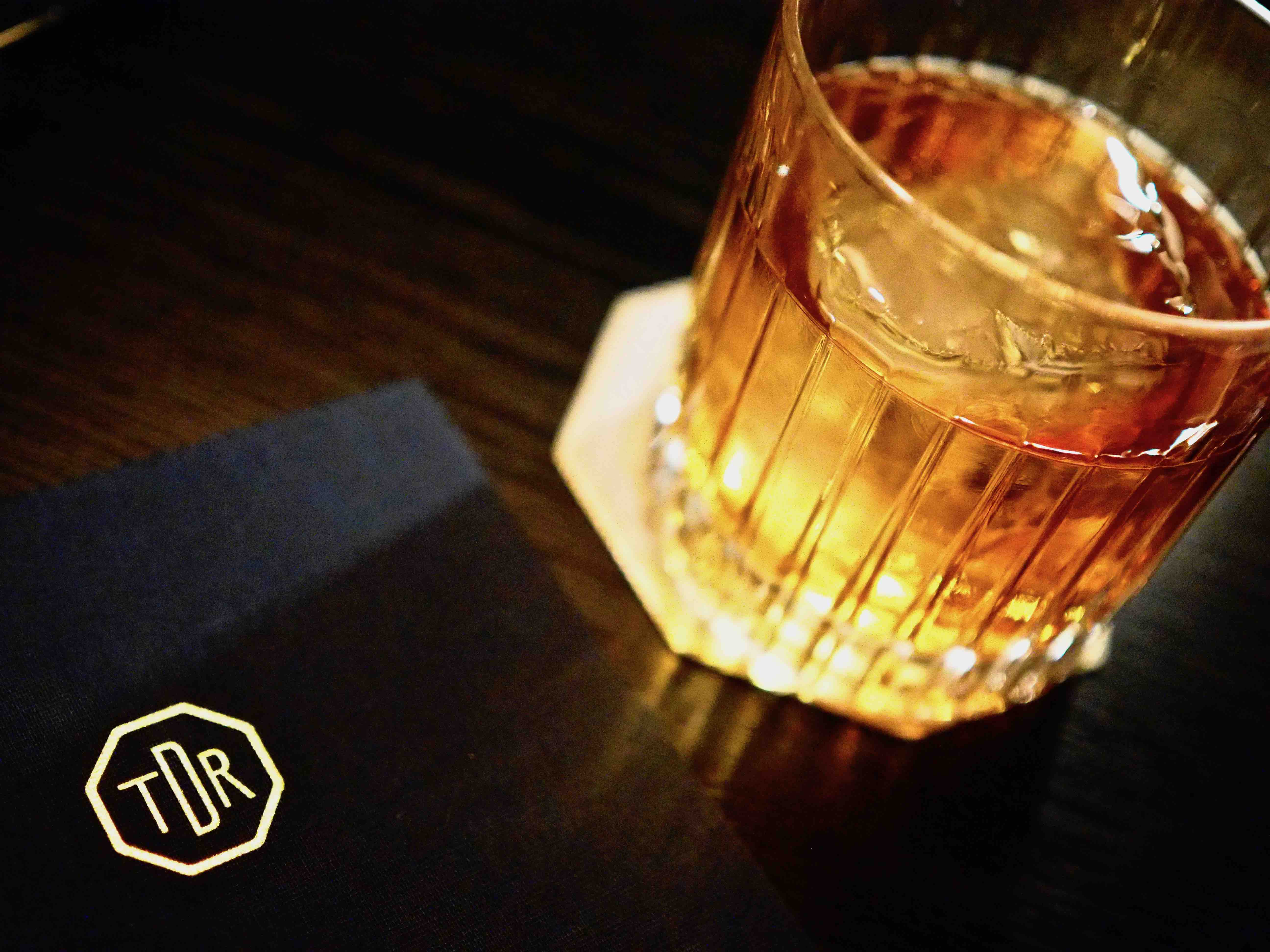 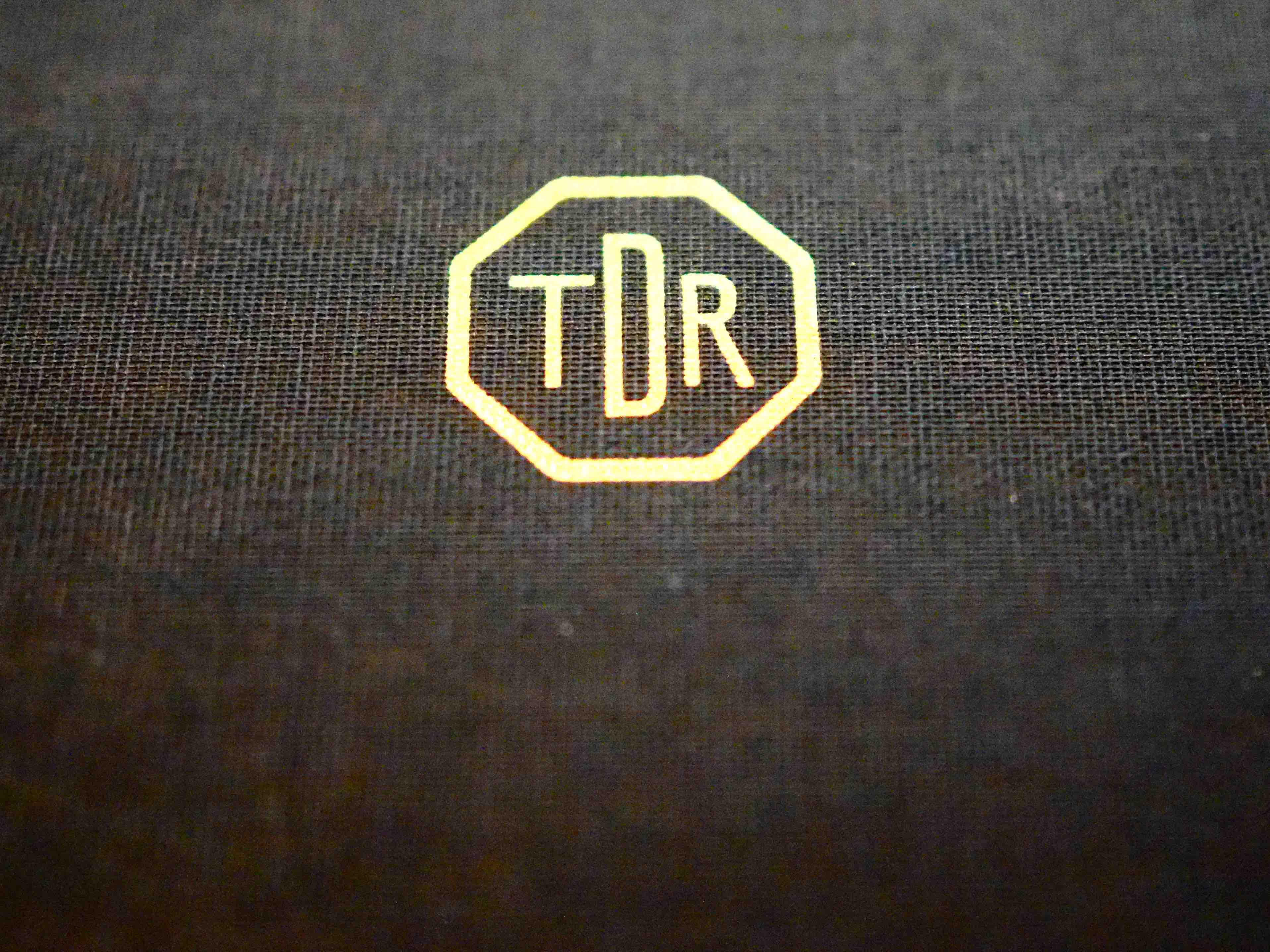 With an eye catching octagonal logo incorporated in the windows that look onto the eponymous square TDR or Trafalgar Dining Rooms is hard to ignore. As it turned out this A1 location turned out to be an A1 eatery too and has become my favourite new spot in London. 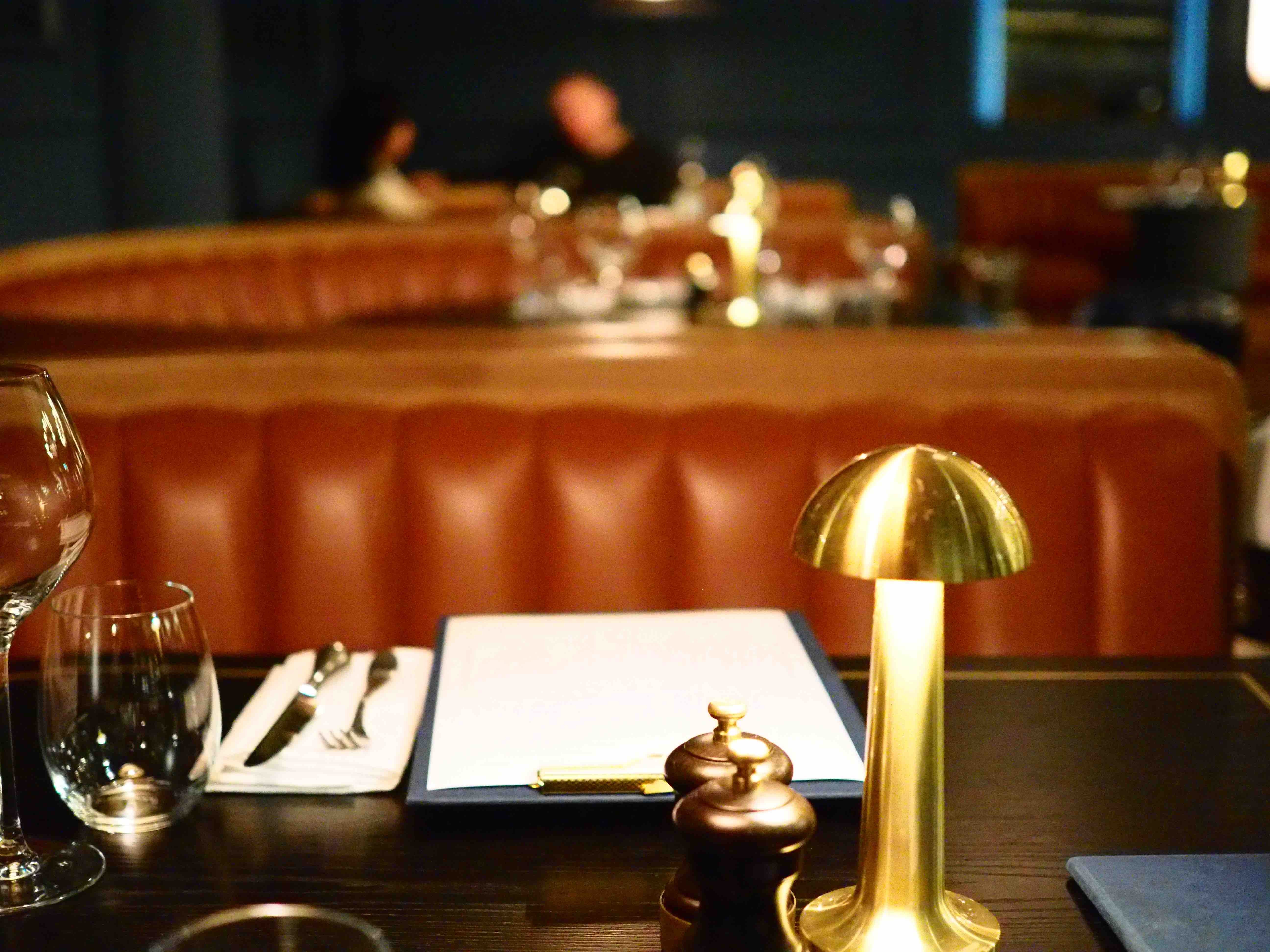 One of my regular dining chums, J was to be my foil for the evening (she’s fond of cocktails and classy dining so seemed like a good bet) and a table for two was subsequently booked. The plush service of the well groomed (and well trained staff, take note ‘B’ listers across town) showed me to our booth. I do love a booth, that cosseted intimacy of the semicircle somehow feels safer, warmer and more private than a mere table. I was there good and early, as J had pulled the booking forward by half an hour.

My view was of the main dining area though the restaurant is split in two, divided by the bar area. Friendly and unfussy front of house Giovanni was a class act. Everything set for a good evening of discovery. But where was J?

Through a series of texts it became apparent that J had become embroiled in some work ‘thing’ and was leaving late. Oh well, it seemed the perfect time to try a Mayday Mayday. The faultless drink in any crisis, a sort of Latin American equivalent of an Old Fashioned it starred the rum of the moment Diplimatico from Venezuela but with added basil oil and Cocchi Torino. This is a humdinger of a drink, perfectly balanced and wonderfully moody in colour. It was not the first time that J had been late but I didn’t mind, more time to scan the menu. Another text came in ‘Got on wrong train, hate overland will be with you soon’. I had another Mayday Mayday. 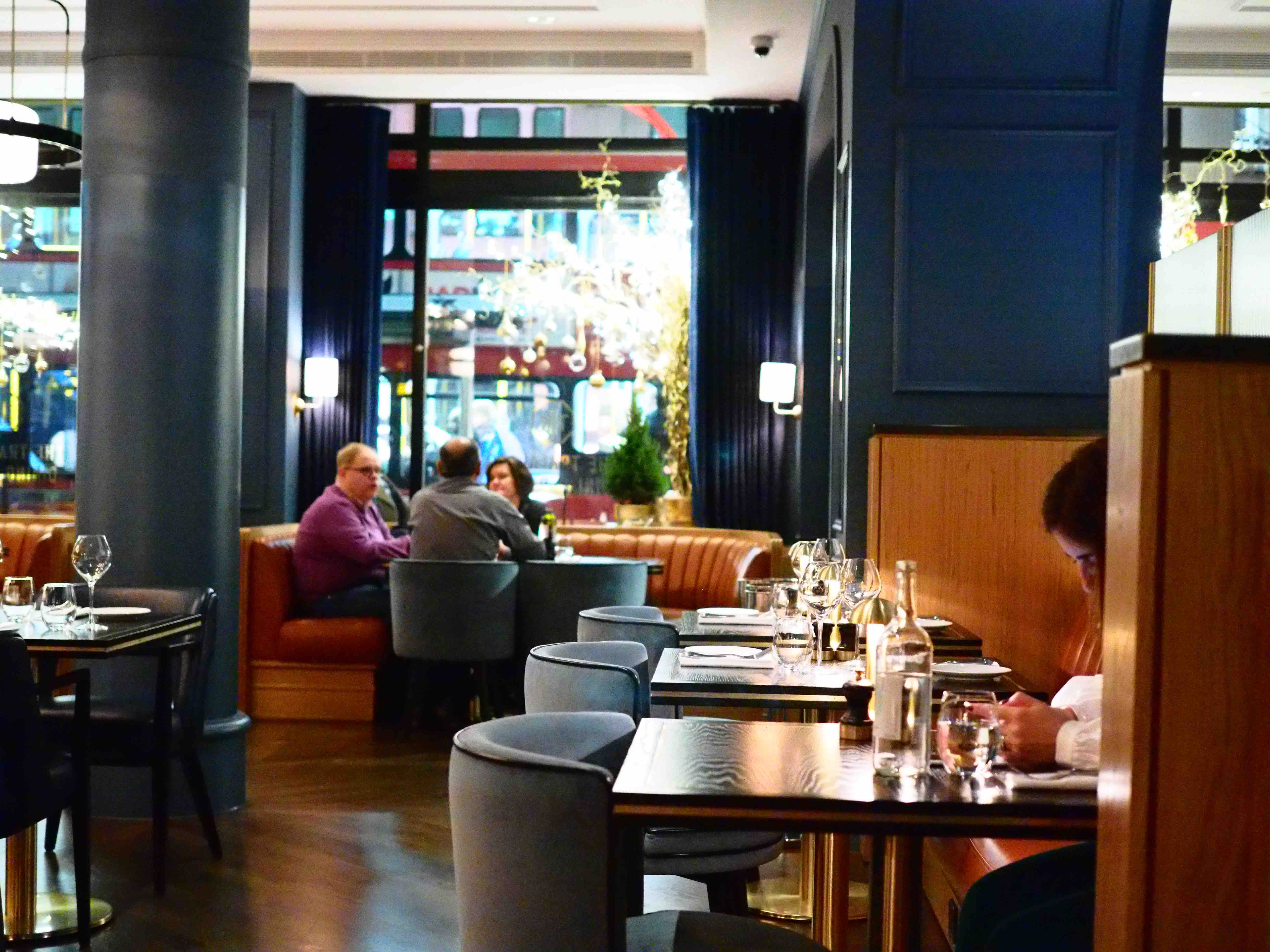 I was chilled and nibbling some smoked almonds when J arrived full of regrets and sorrow and mumbling something about having a ‘blonde’ moment. She chose a ‘Fourth Plinth’ a summery mix of Tanqueray No 10 gin, sage syrup, pink grapefruit and lemonade. Normality had been restored and I noticed her hair was her usual brunette. 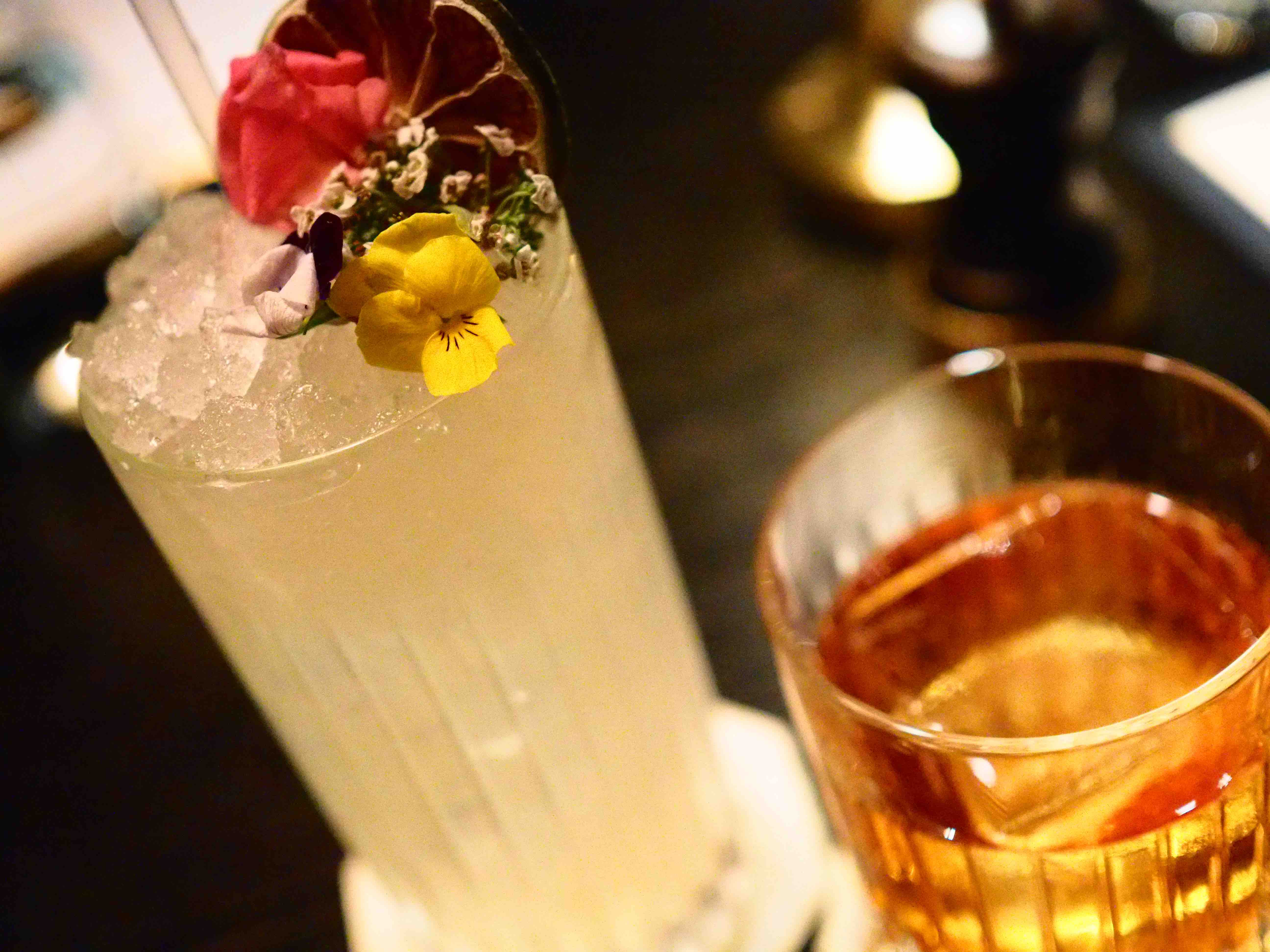 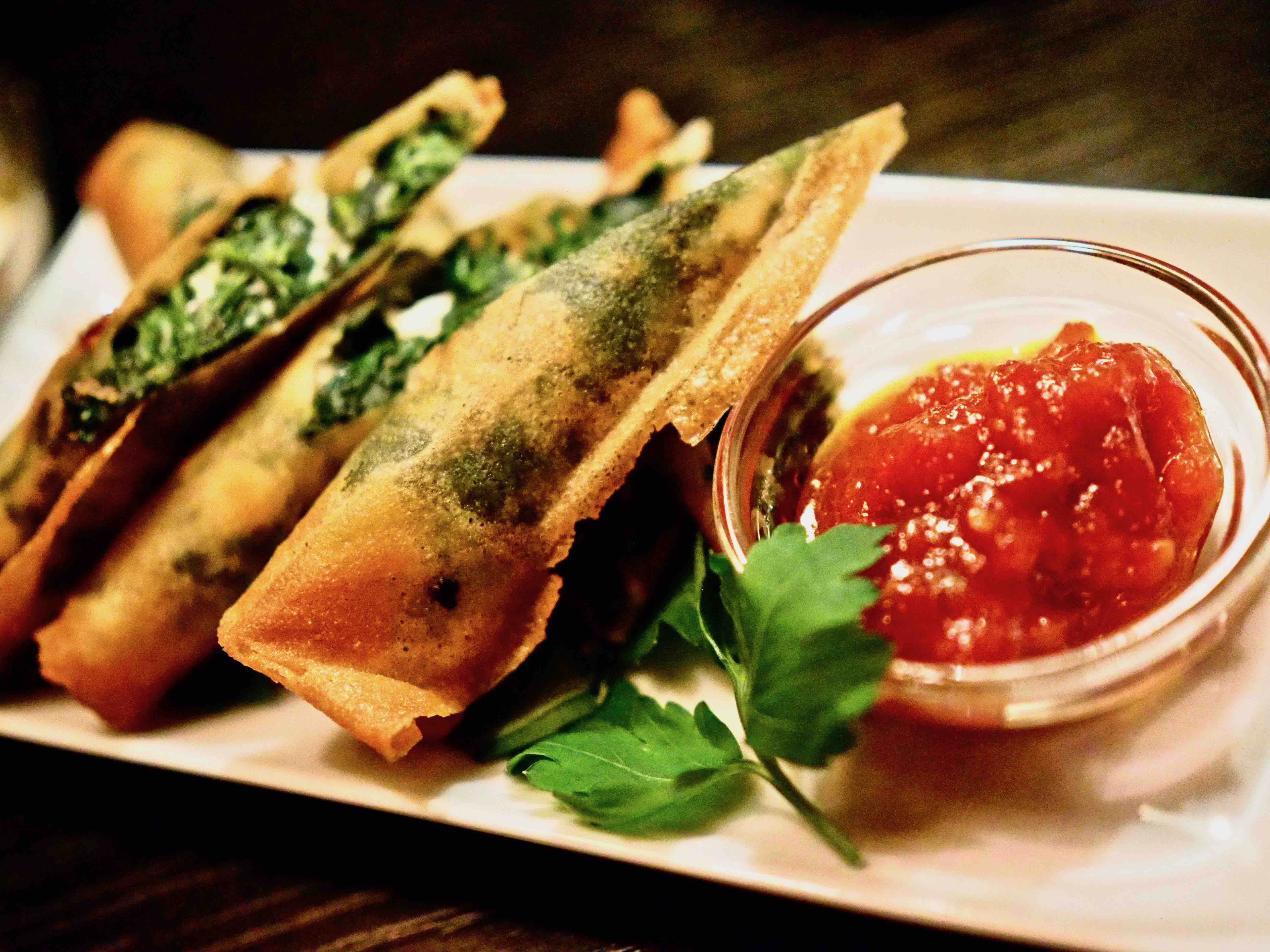 J was in possession of a good appetite as there is “No lunch in her world” apparently. The menu leans towards Mediterranean and Middle East and offers good variety. As well as those smoked almonds the nibbles included dips and pita and spinach, feta and spanakopita. Great to chat over while choosing what’s to come later. 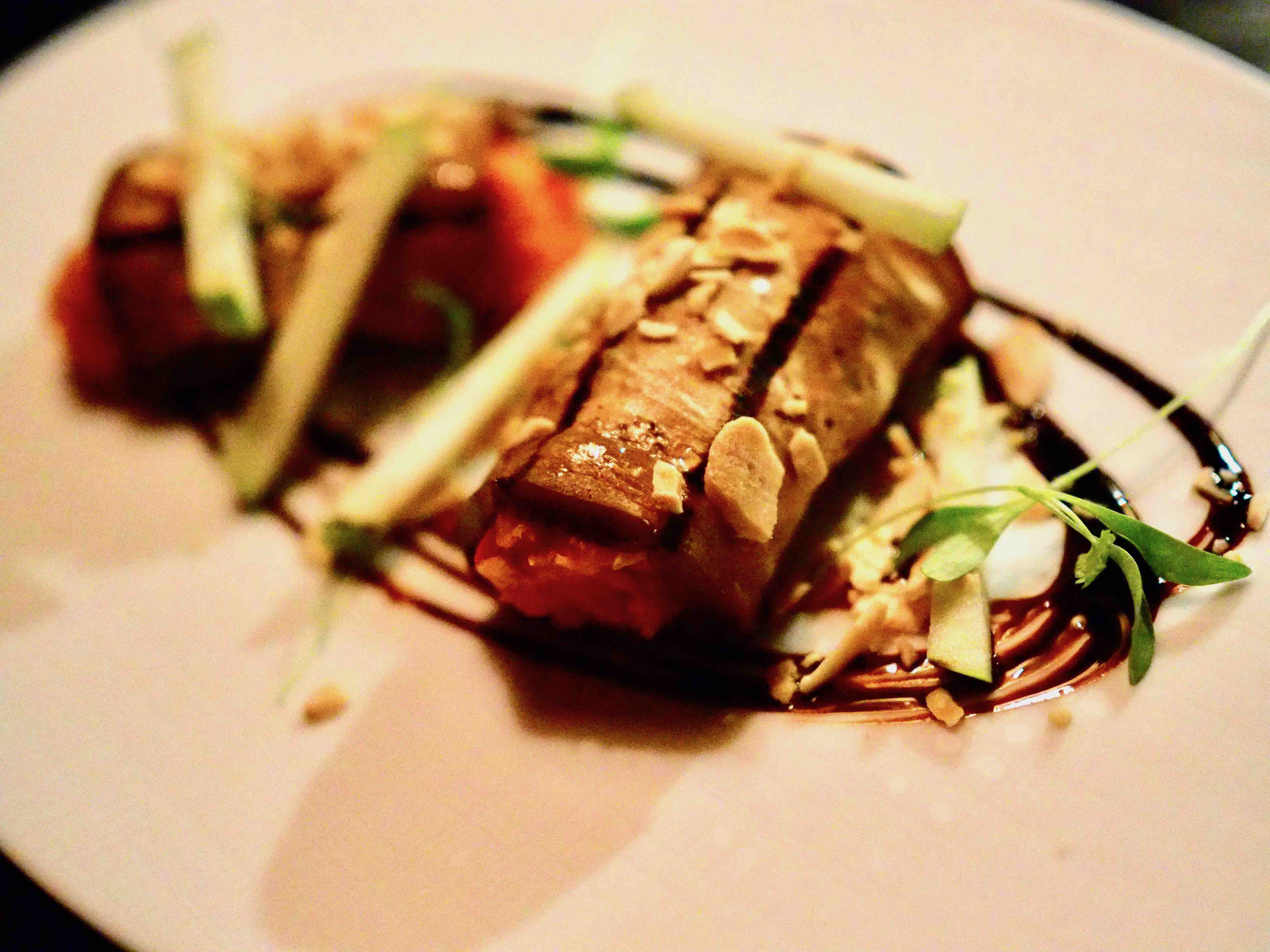 The fluted cognac leather of the booth was becoming more and more comfortable as I took in the dark blue walls, grey columns of this elegant Deco-like environment. It’s a cool place to hang out, plenty of space between tables. I was relaxing, I think the Maydays were kicking in. 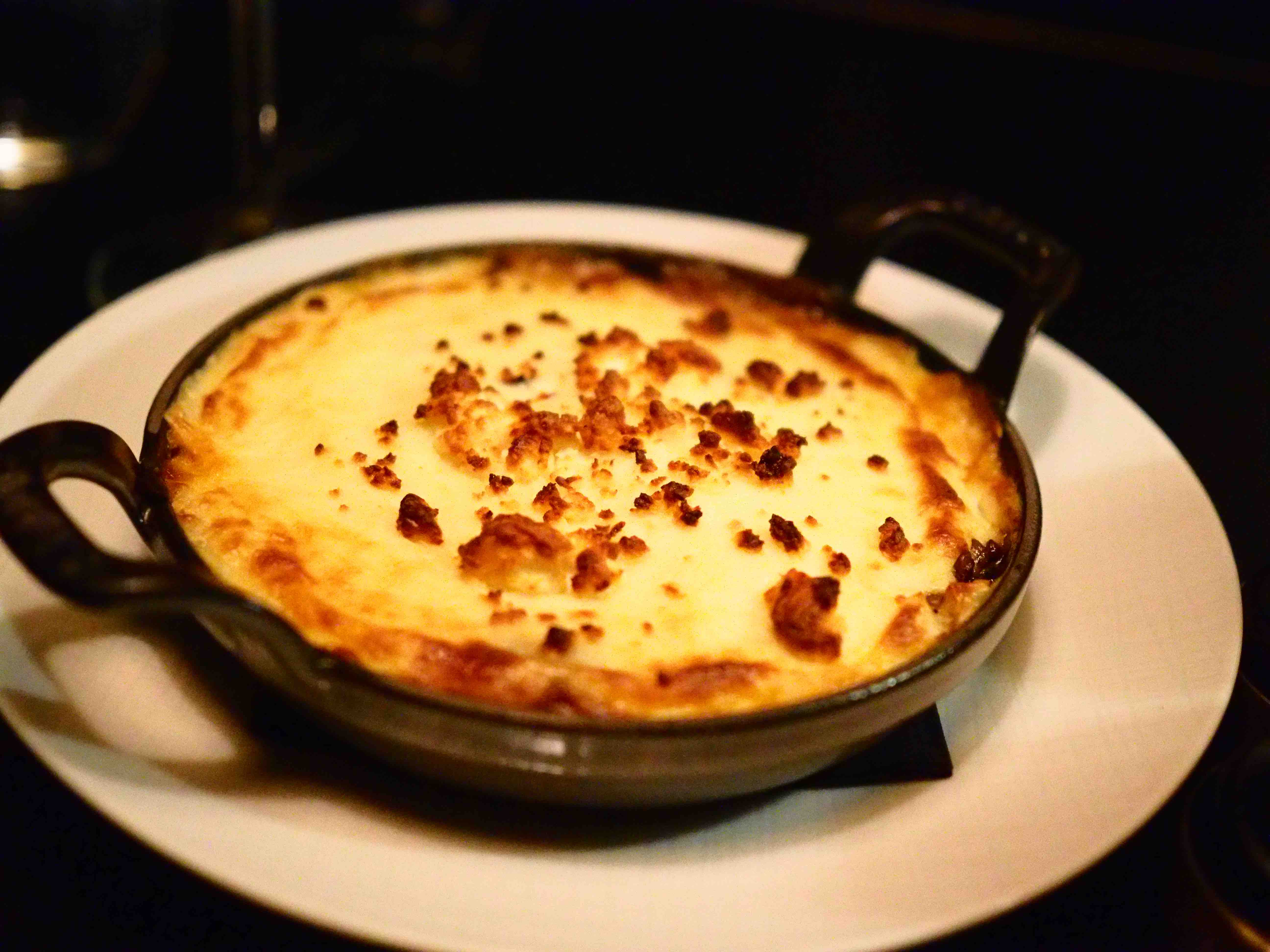 J did indeed have an appetite. Her Burrata with pickled heritage beetroot and lemon varbana was fresh and comforting and the puy lentil mousaka, fresh Ricotta and roasted peppers, was a taste fest winner. Rewarding to see how good veggie food can be with just a few simple ingredients. My aubergine, romesco, apple and coriander had that sort of zing you’d expect from a return ball that should have been an ace, very sharp and really tangy. 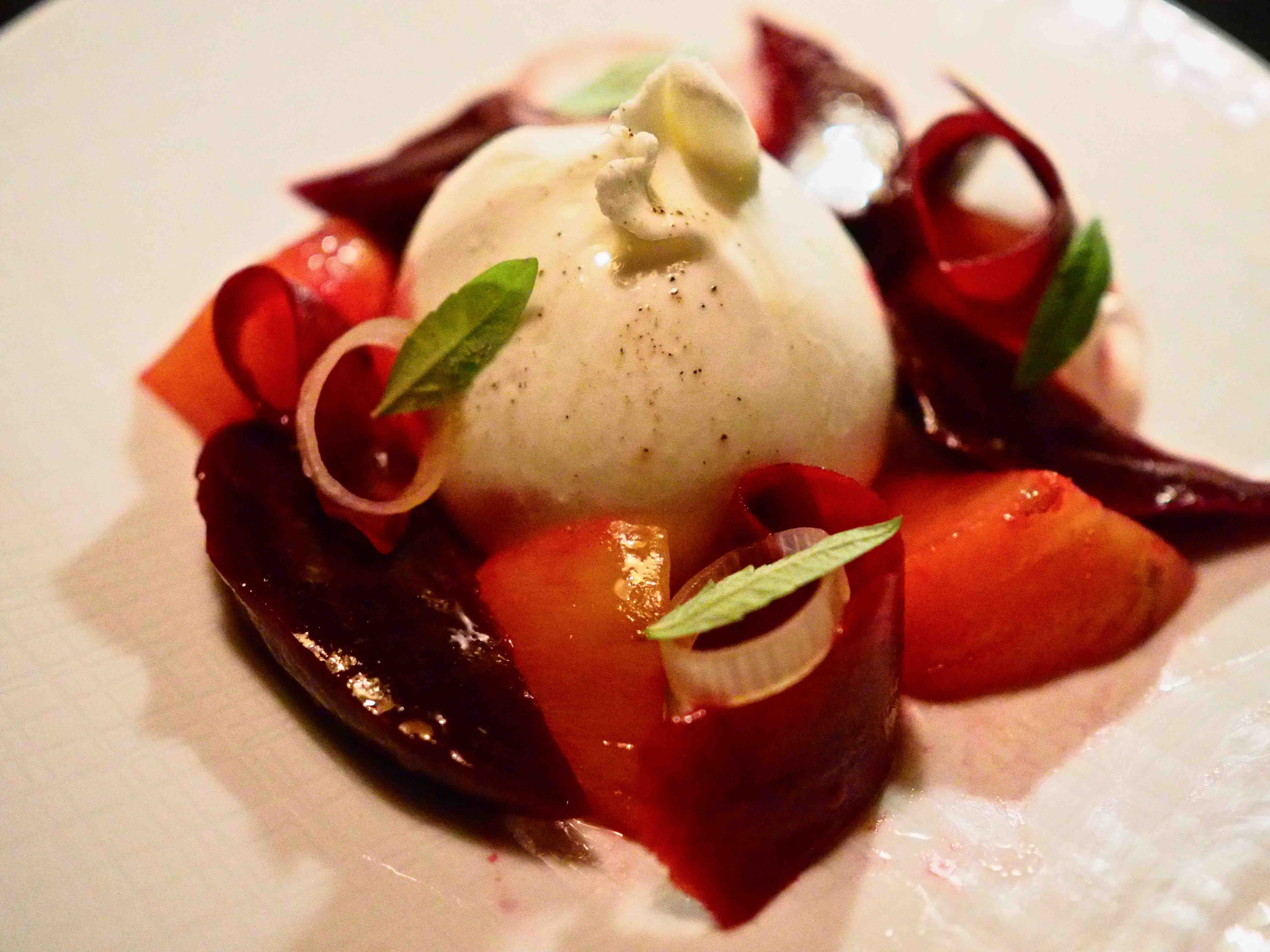 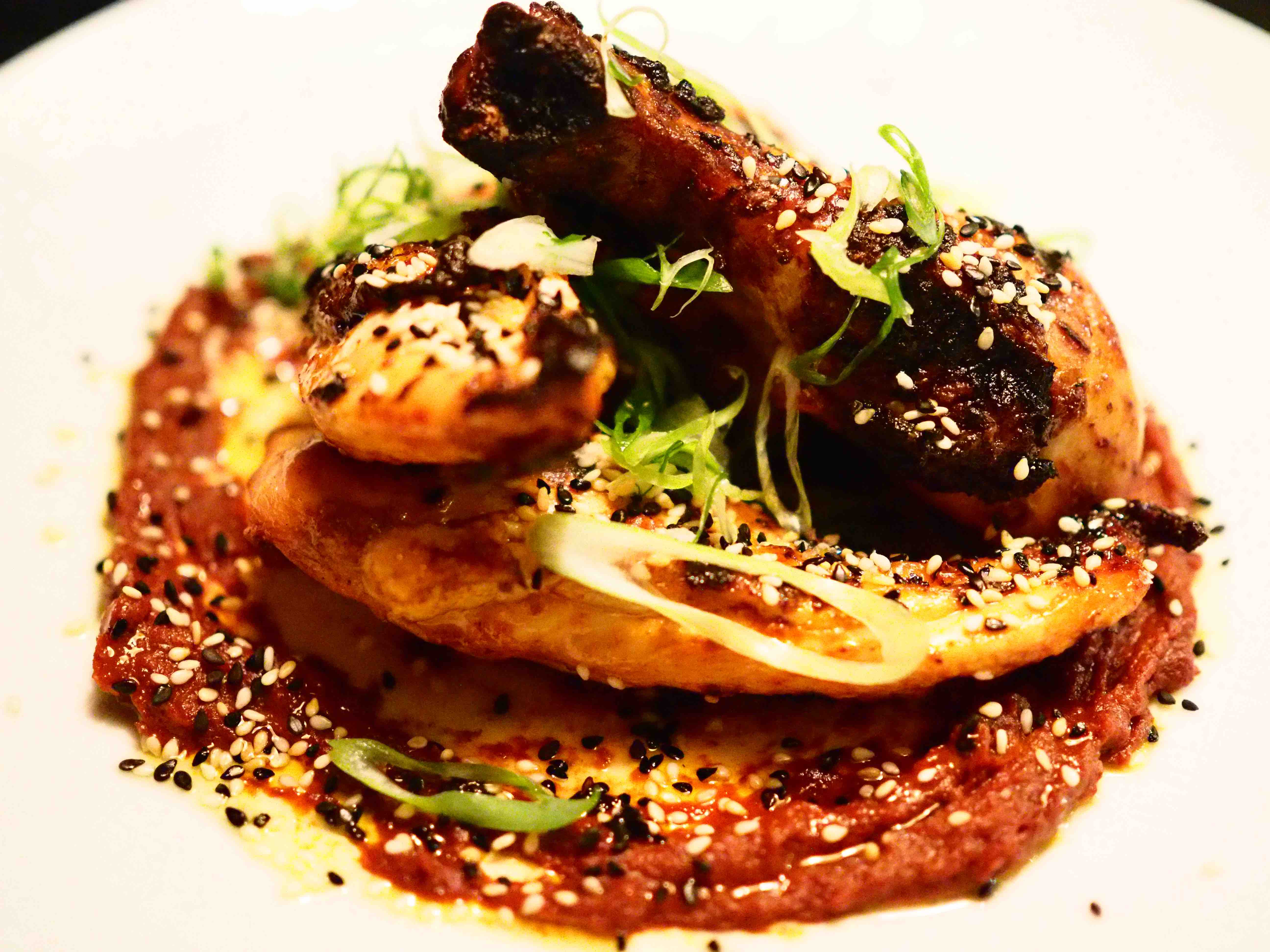 The food here has that sort of Malabar vibe of pan Mediterranean but without the hassle of queuing for hours to get one of the 15 spaces at a bar. Much better ensconced in a spacious gaff like the TDR. My main was a chicken number with chilli and garlic with a touch of sumac. I’d have liked a bit more of a kick with the chilli but it tasted great as it was. The sides didn’t let the, er, side down either. Roasted sweet potato with paprika yoghurt, cauliflower with tahini and pistachio was a treat. 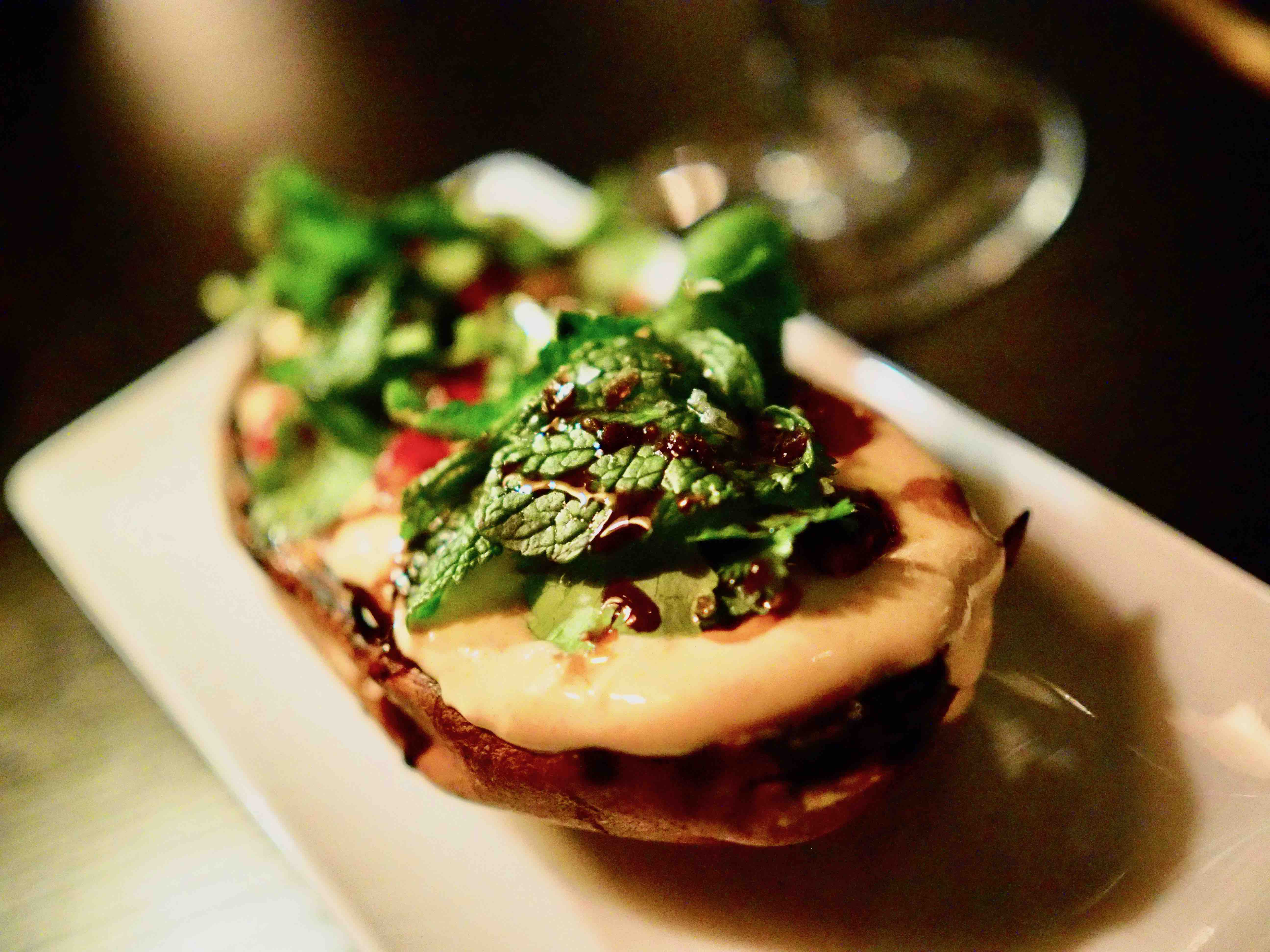 J (of the bottomless stomach) had a chocolate ganache with thyme custard and toasted sesame while I went for roasted pineapple with coconut and lime sorbet. Both worked well but I’m pleased I chose the pineapple, as the chocolate was super rich, seemingly perfect for those who don’t have lunch in their worlds. 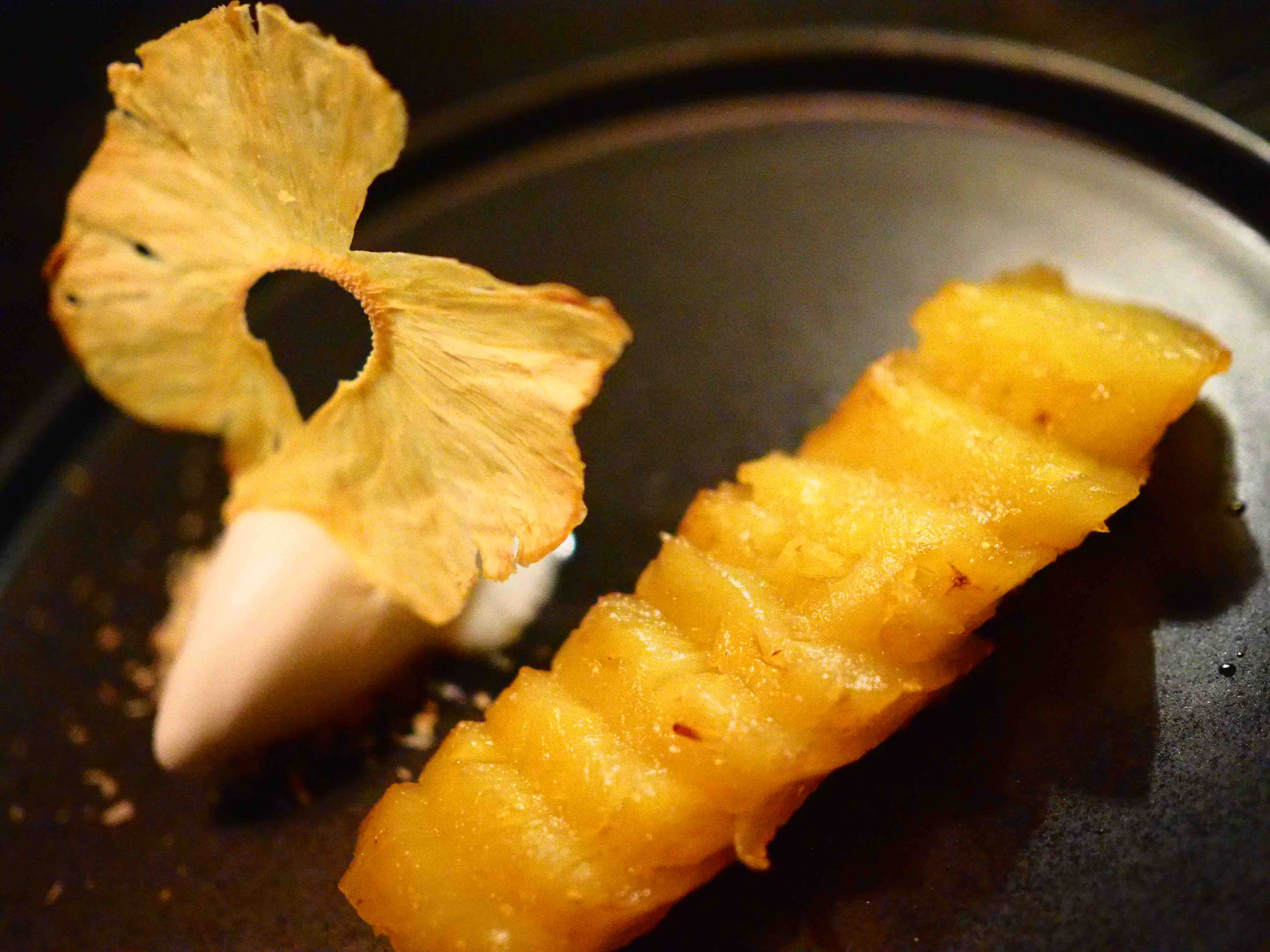 J thought the “Atmosphere was really relaxing and conducive to a good conversation”, well the first half hour was about trains, leaving work on time and stuff like that… She added “Fantastic cocktails, great service, hearty food and overall approach – a winning victory!” I think she’s after my job! 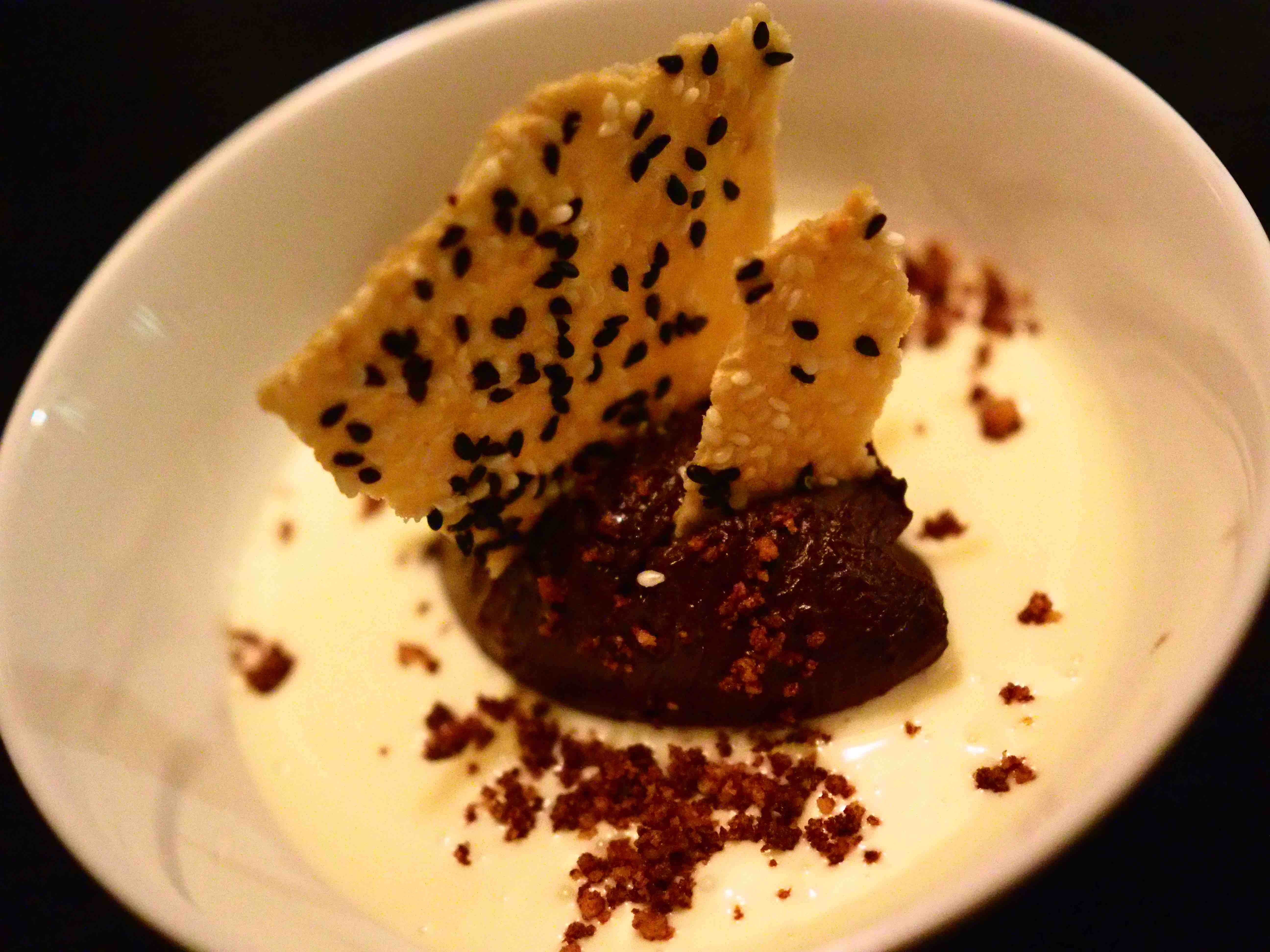 So by the end of the meal I had come to a few conclusions. The first and most important was that The Trafalgar Dining Rooms offers deceptively simple dishes, well executed that pack a powerful flavour bomb punch. The second is when dining with a friend and they ask to move the meet time (earlier) really question that logic and thirdly the location is simply brilliant, it’s near everything, everyone knows where Trafalgar Square is and the whole place has gravitas. Not bad for a new opening.