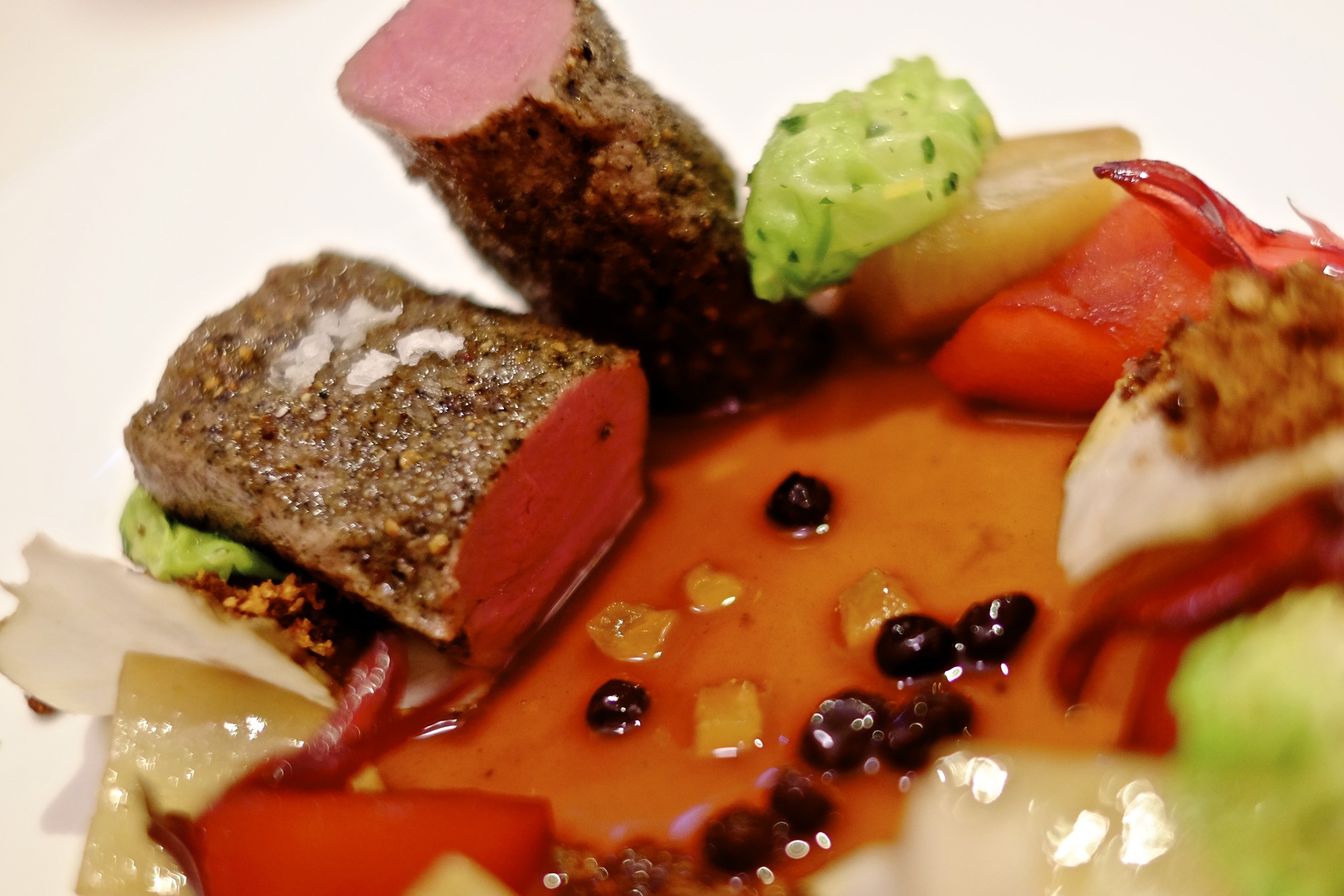 At the beginning of Carol Reed’s 1949 film The Third Man the narrator talks of not knowing the old Vienna before the war referring to the days of imperial splendour and pomp. That may have had validity when the movie was made but it seems a little quaint now. Today Vienna has so much to offer and after my recent visit wanted for nothing.

It is a small city and manageable by foot or the excellent transport system. The Innere Stadt or centre is where a lot of the famous sites can be found. My visit was short but the compact nature of the city allowed me to cover a lot of ground. 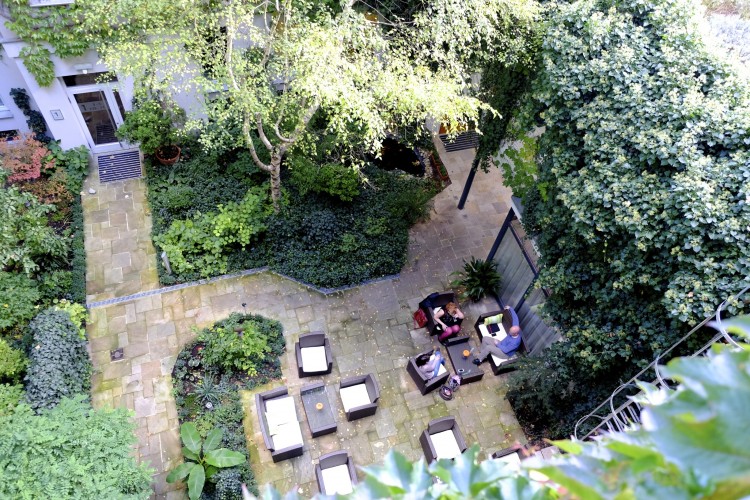 The Leopold Museum is a modern building set among the splendour of the museum quarter. It houses works from the interwar period, impressionism and Vienna’s infant terrible Gustav Klimt and on my visit a touring exhibition of Giacometti the famous Swiss artist and sculptor. I was familiar with his extraordinary long stretched metal figures but he also painted and sculpted in more traditional disciplines. The metal figures are amazing to see in real life. Some are taller than two metres and others barely a couple of centimetres high. I discovered that you can sex a Giacometti – The men are always walking and the women standing. Who would have thought. 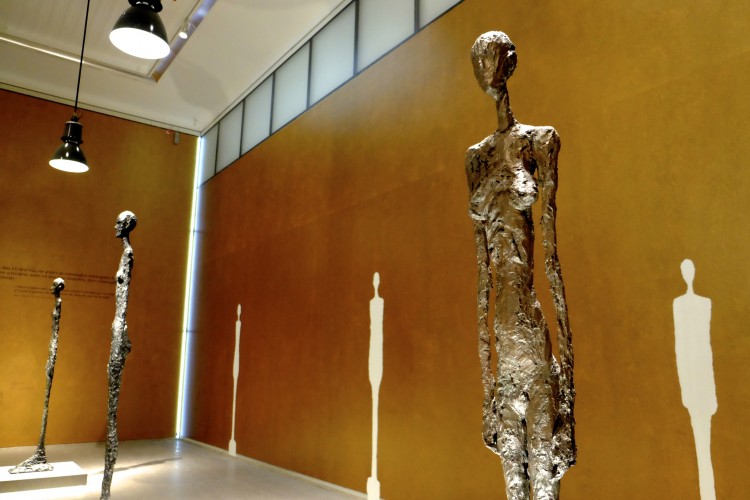 The Belvedere Palace houses the crown jewel of art as it contains the famous Gustav Klimt’s Lovers: The Kiss. It is kept in a darkened room and guarded carefully but still on display for all to see. I stood in front of it mesmerised for a good 15 minutes. The contrast between the gold and less reflective palette is more apparent than in any reproduction. This masterpiece must have shocked the art world when it was first exhibited in 1909. It is beautiful and mysterious, the highpoint of his ‘golden period’ when he favoured a gilded Byzantine style. Some have commented that it is not a kiss at all but a strangle, an act of violence. I see no evidence of this when presented with the full size original, the female with eyes shut in rapture not struggle. It is about 2 metres square (although it is usually reproduced in a more conventional portrait shape). 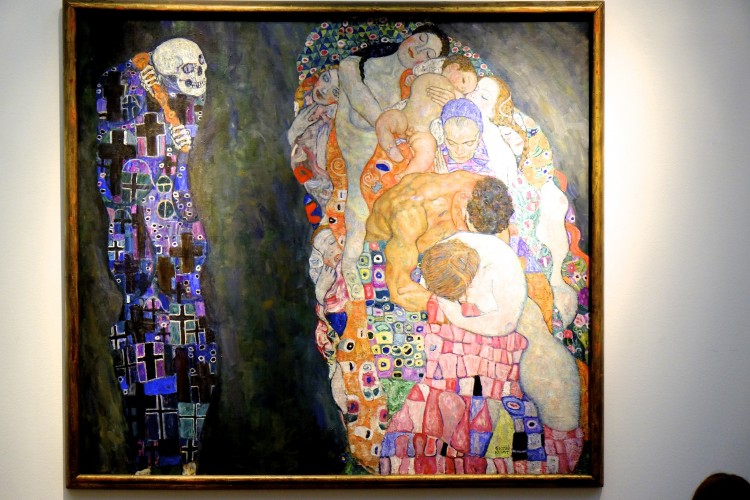 There are many of Klimt’s pieces in the Belvedere, but the only one that can beat it in my view is an earlier portrait from 1901 called Judith. A dreamy lady painted with light flowing clothes framed in metal with her name embossed on the top. With clear biblical references it stands as a controversial interpretation, leaving out all context and suggesting a calmer more sexual femme fatal. For me this vision of a voluptuous semi clad woman, thought to be his friend and lover Adele Bloch-Bauer holds far more secrets than The Kiss will ever reveal. 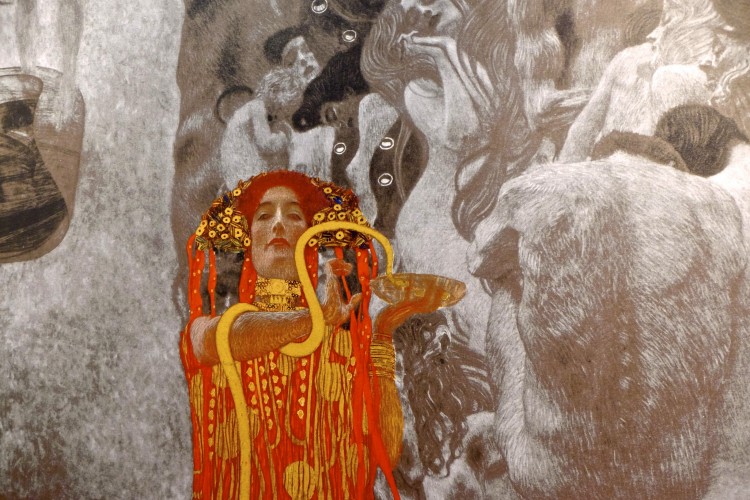 Vienna has a tremendous amount of Baroque architecture. Every street has a gem on the corner. I couldn’t help but take a stroll to 5 Joseph Platz the home of a certain Harry Lime. Graham Greene’s antihero fictional home really exists. It has two pairs of pillars either side of the door carved into classical women. Quite an entrance and opposite the statute of Franz Joseph illustrating that there really isn’t any need for set building in Vienna because it already has everything you need. 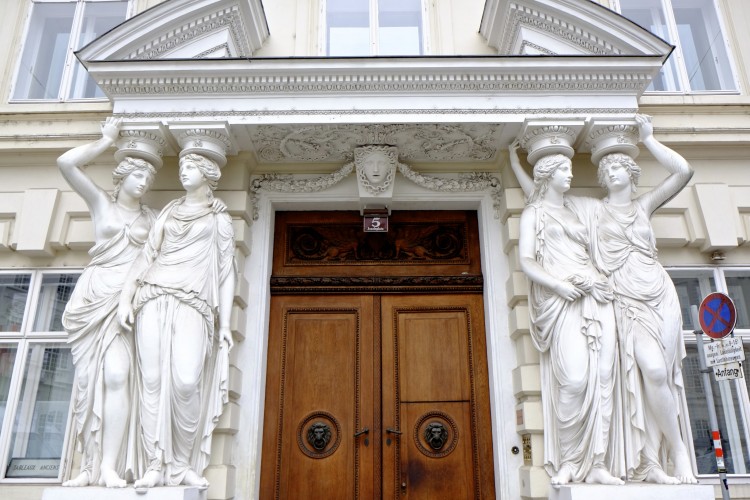 The coffee houses are a must if only to see the swish and swagger of the waiting staff. There are a few pretenders but nothing beats Vienna. I called into The Café Central in Herrengasse 14 in the Innere Stadt. Once the thinking ground of Leon Trotsky, Sigmund Freud, Vladimir Lenin and Adolf Hitler it has served as a melting pot of ideas for Vienna since 1876. The high arched ceiling with decorative touches and plush upholstery make it a welcome retreat for a cup of hot chocolate and a choice of fantastic cakes. Another institution in Vienna is the Hot Dog. The great and the good can be seen eating these spicy snacks all over the city at special stands where you can also get a beer or hot drink. 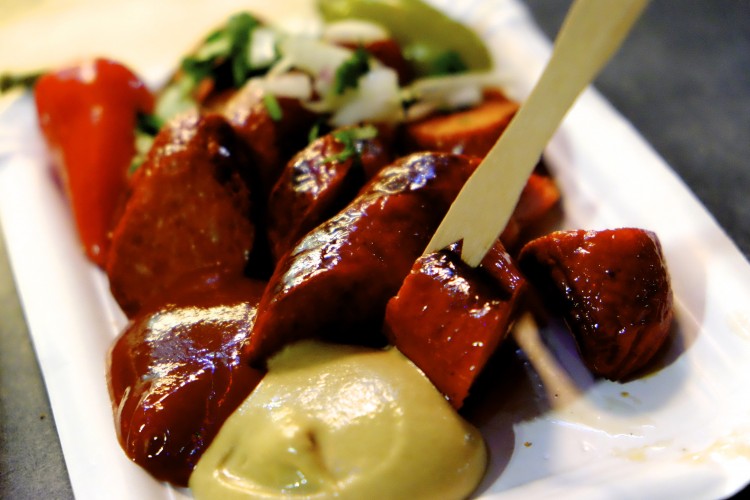 The famous Riesenrad or Ferris Wheel is situated in the Prater, Vienna’s largest park (open from 10am – midnight). Built in 1897 (by the British engineer Walter Bassett Bassett) is one of the largest and oldest in the world. Famous for its inclusion in the The Third Man it still runs today. I took a ride as the sun was going down. The perfect time to catch Vienna coming alive with the night, the gondolas are roomy and large enough to have dinner in. You can reserve one for that special occasion. I bet you can’t ride on these icon ride without humming the famous zither music from the film. 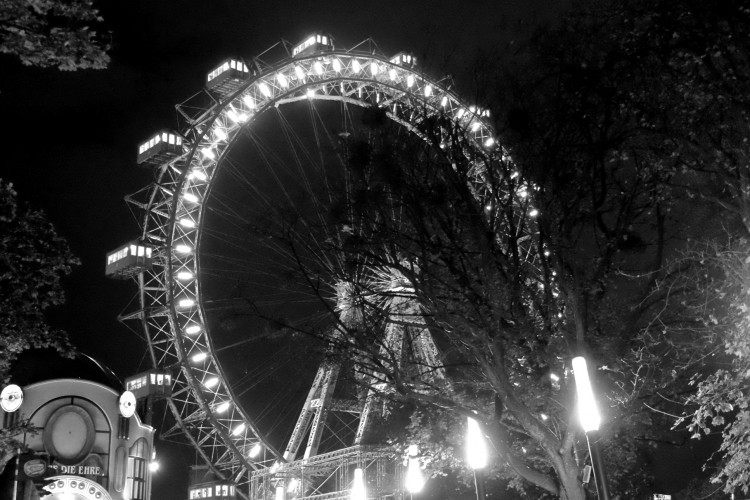 I was staying in Vienna’s Boutiquehotel Stadhalle, which produces all of the electricity it needs from solar panels and is green as can be, the lights only come on in communal areas when there is movement. It proudly boasts a zero energy balance. I found it very comfortable and well located near the Westbahnhof metro Station. They have a good breakfast here but no evening dinning. I had heard of Edvard, the recently Michelin starred restaurant tucked underneath the Glorious Kempinski Hotel. So decided to try it out. 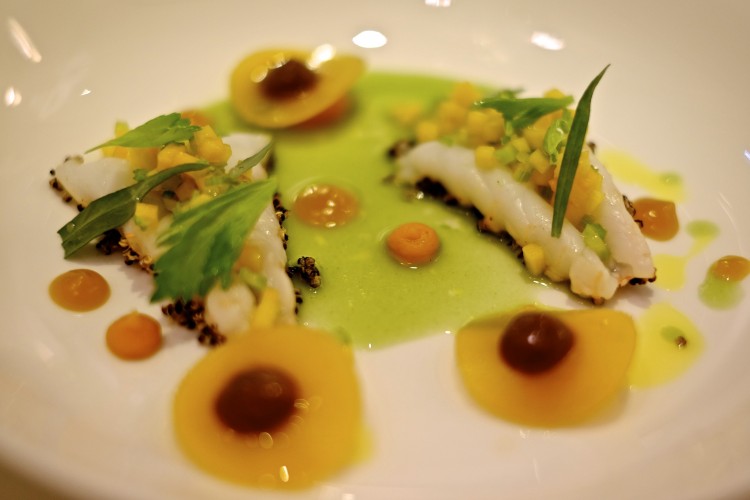 Dinning in Vienna is not cheap in general and Edvard is no exception. But where it is exceptional is its outlook. The space is elegant and cool, a million miles away from the historic coffee and teashops the city is so famous for. The welcome I received was genuine and warm. The menu has a number of tasting options and an a la carte that can be modified if you like. The portions are not small but modest which I feel allows you to try more than you would normally. The tasting menus are a good bet and they offer wine matching as well.

The mainly French and Austrian fare is rather good, when the sommelier appeared he handed me an iPad. Why don’t all restaurants do this? I could swipe along the offerings and then if interested delve deeper to discover the producer, region etc. This is technology put to a good use. Good-bye to those large dusty phone directories you find in grand hotels and expensive restaurants and hello hand held expertise. 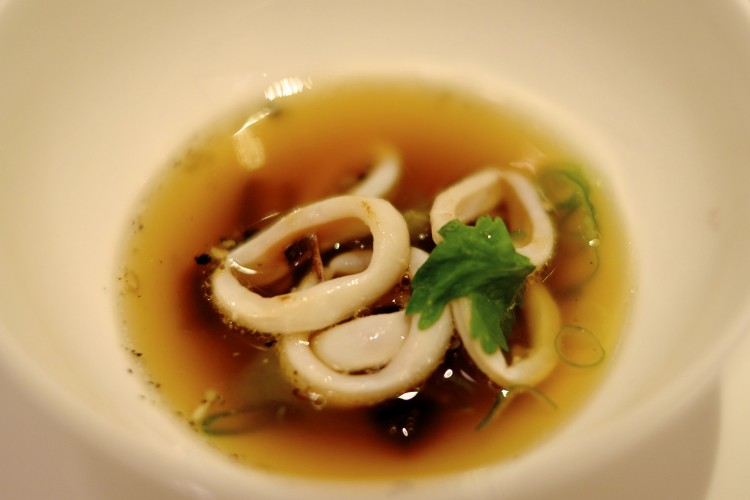 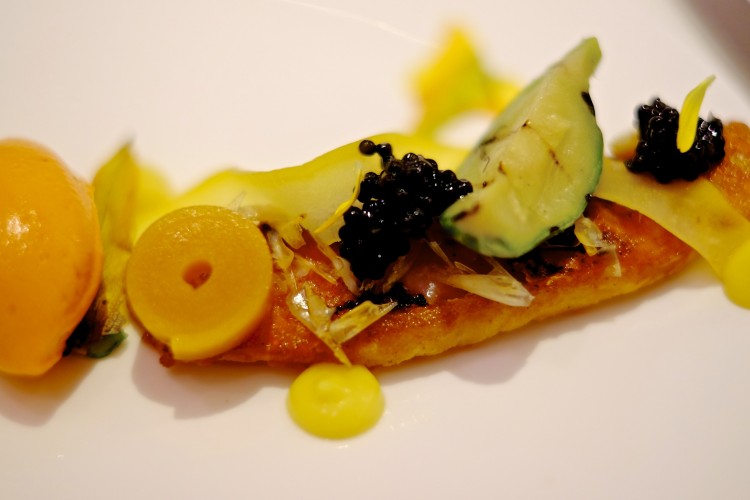 The food kicks off with an amuse bouche of a subtle and delightful spring onion broth with squid. Tasty and clean it was just a little bowl but I could have eaten a lot more of it. The food is beautifully presented with an eye for form and structure. The red mullet with caviar and bell pepper ice cream was brilliant. The ice cream was a revelation, sweet and peppery that worked a treat with the fresh mullet. 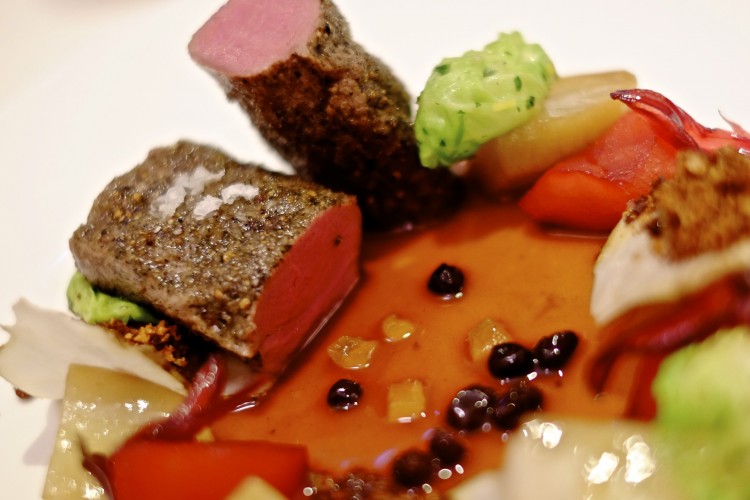 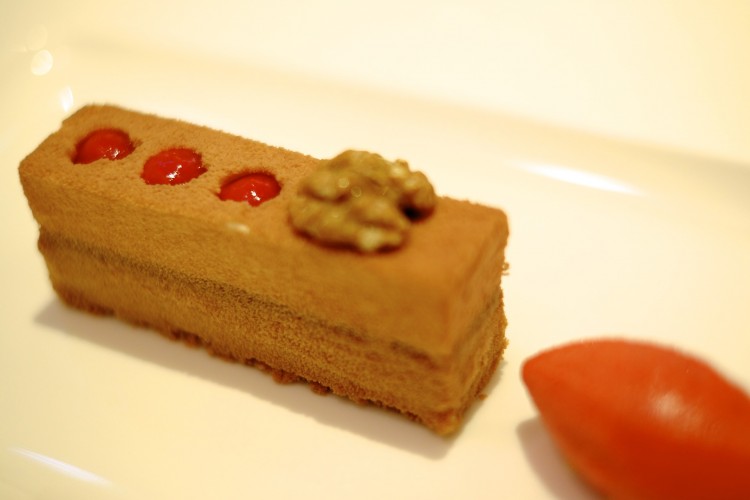 This is a calm oasis of a restaurant. Not the sort of place to party the night away. It is not a hushed temple to gastronomy but a sophisticated and classy way to pass an evening with friends and of course excellent food. 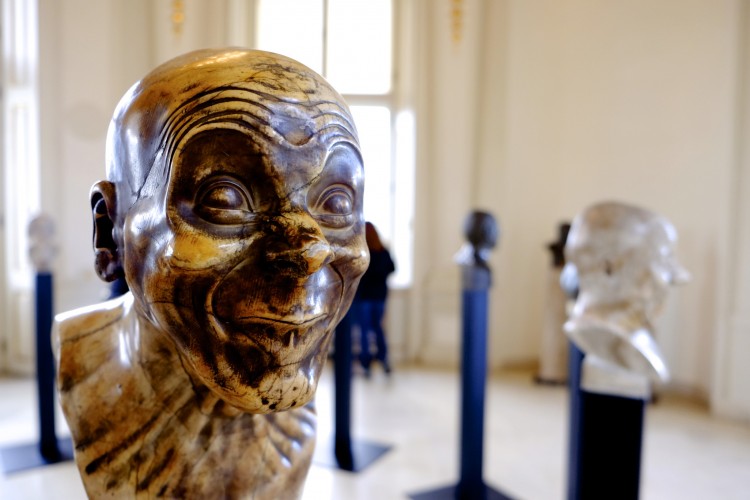 I had langoustine, pumpkin and quinoa from the ‘in between’ section of the menu. It had been laced with curry and sat in a pool of celery. It smacked the taste buds right in the eye, in fact the pumpkin looked like eyes. The plates here are so delicate and pretty it sometimes is a shame to eat them. 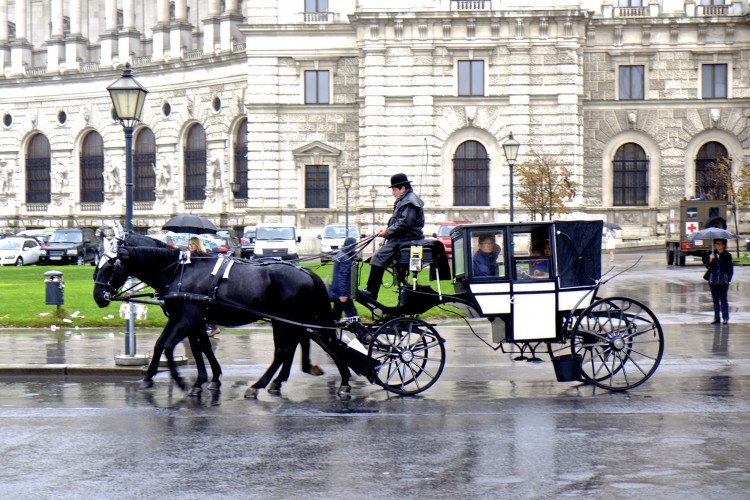 My main (that had been recommended to me by Tobias Winderal, the restaurant manger was a brilliant example of perfectly cooked venison, totally pink with a little colouration on the outside. Hibiscus brought a sweet note and brussel sprouts brought it down to earth. There was a touch of cacao in there, which for me was not necessary but did not alter my view that it is a solid dish, well cooked. 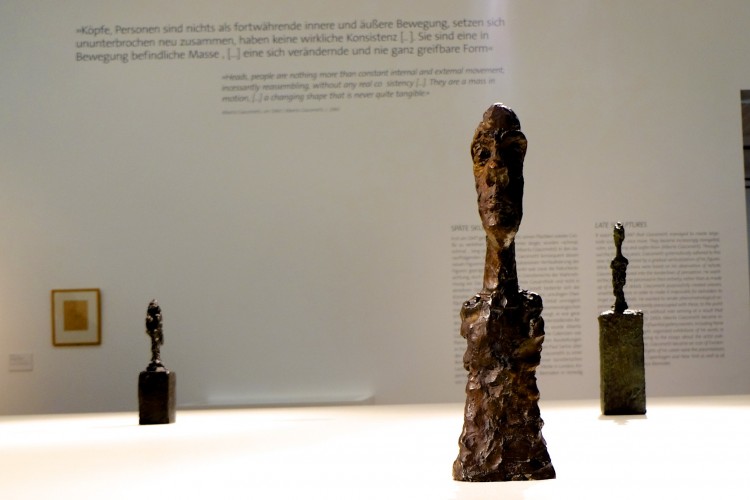 My Terrazas Malbec reserva was coming to an end and I was going to call it a night but then something caught my eye on the menu, porcini, cornel cherry, white chocolate and walnuts. I asked Tobias about it. He just grinned and said “try it, it’s amazing”. It was a mushroom flavoured white chocolate mousse. Once you have got your head around the idea and think it through, these flavours are complementary, so much so that I can’t think why this hasn’t been done before? Another gold star to Edvard. You might be wondering what it tasted like? Well it had the clear identity of mushroom but was definitely a dessert, very clever and accomplished.

Edvard’s is a super restaurant in a glorious hotel and I shouldn’t have expected anything less than great food. But it did surprise me on one level it broke out of the traditions that permeate Vienna’s food scene so skilfully you hardly knew it had happened. Bravo Edvard! 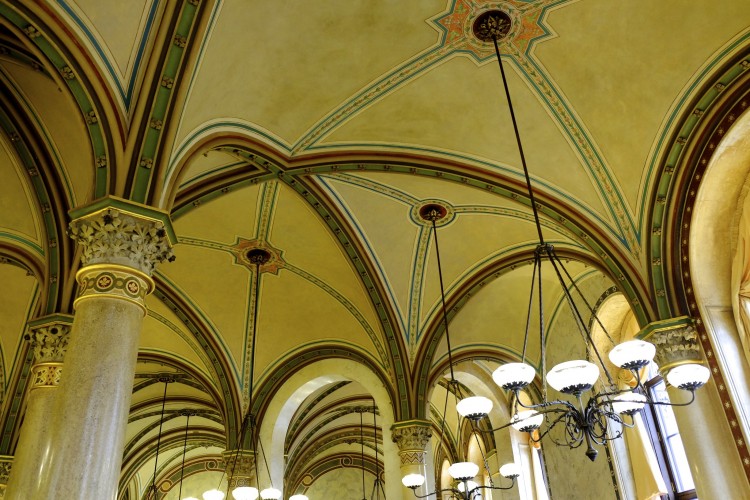 My time was over in Vienna and I wish I had the chance to see more and stay longer. It is a city of high art, excellent cakes, sublime food and cinematic history. The Viennese enjoy culture in all of life’s pleasures and even have a phrase for it ‘Wienner Lebensart’– Vienna Life, I couldn’t agree more. 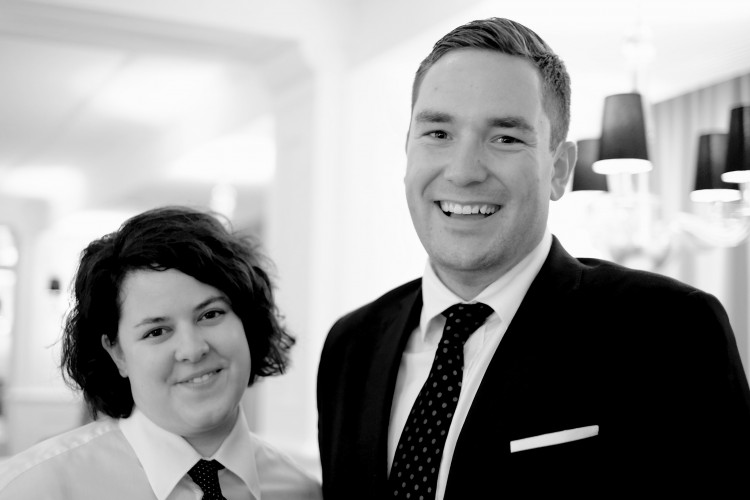 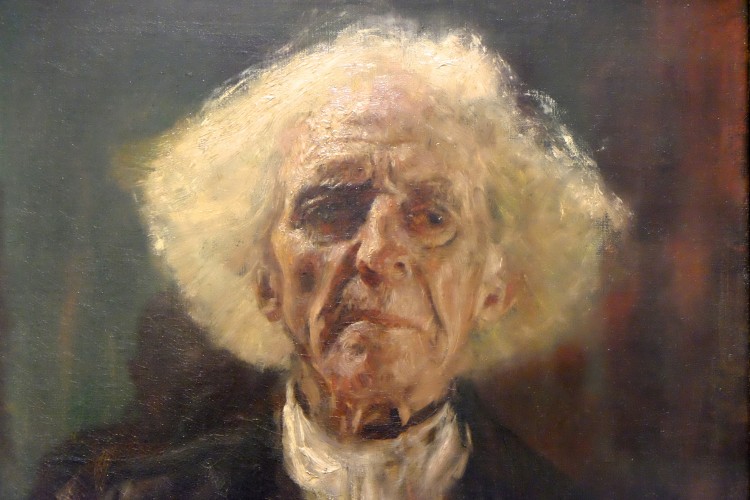