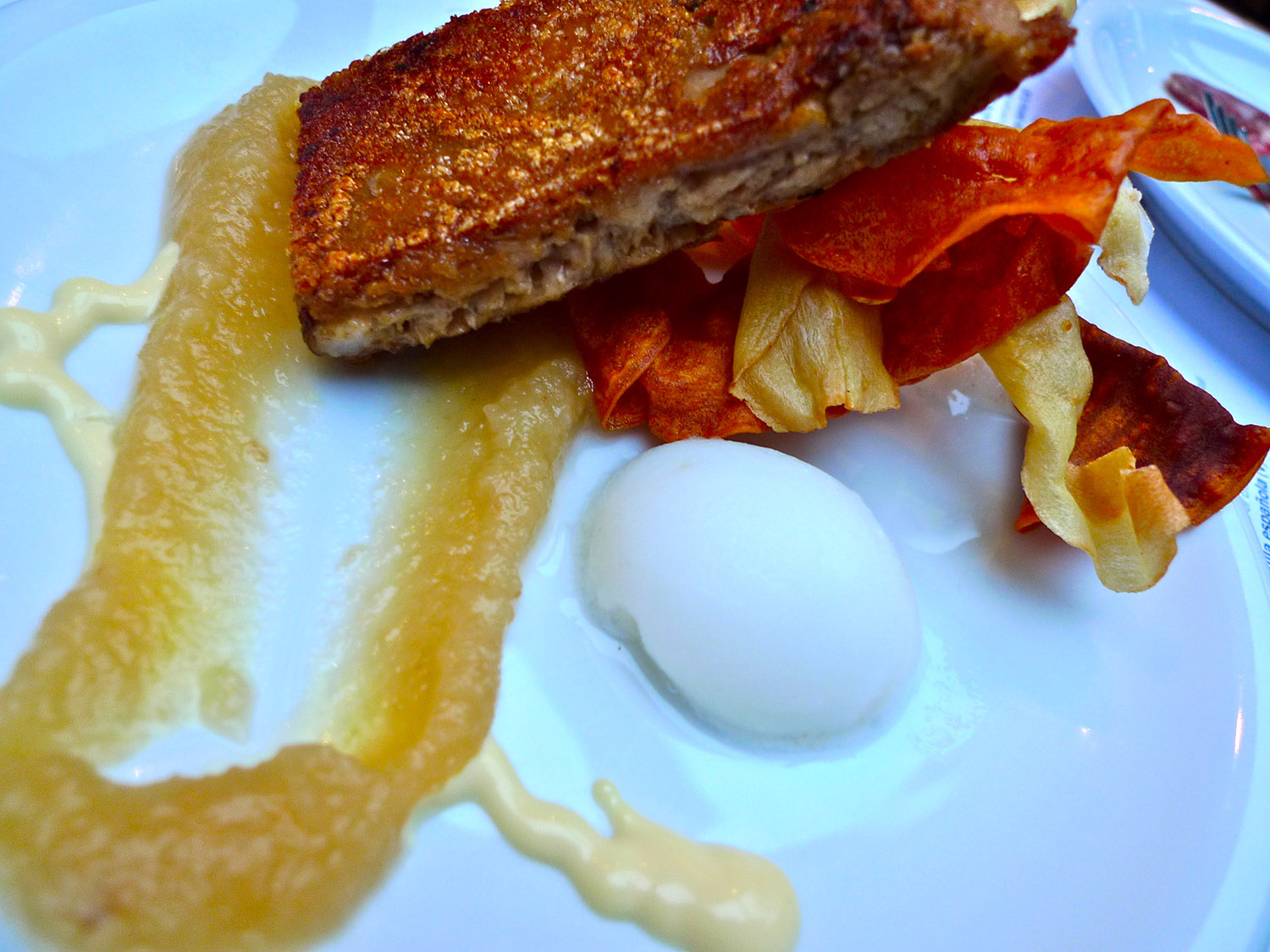 I’ll come out with it straight away, when I first started eating at Boqueria I thought this is just an average tapas wannabe joint with average food and a less than average ambience BUT after a few dishes the waitress casually asked with a twinkle in here eye if we had tried the Suckling Pig?  And we said “no we hadn’t”, she smiled …  Well clearly with that sort of comment I couldn’t resist the temptation of trying it so we did and boy oh boy was it good.  So good in fact that I’m going to dismiss many of the other dishes and talk almost (with the odd exception) exclusively about Cochillo Asado the glorious Suckling Pig served with Parsnip, Sweet Potato Crisps, Apple Sauce and Lemon Sorbet.  Now there’s an unusual thing lemon sorbet with pork?  I’ve never had that before and was curious to see what it brought to the plate.  Well it provided a cutting citrus slice of a pallet cleanser that seemed to be made for this dish.  My ignorance is such that it may be a Spanish classic that has been around for years and never been on my radar.  I’ve been missing out, this simple addition to an already splendid combination raises it to a level beyond its beguilingly bland description.  The crisps were perfectly crisp and not at all greasy, the apple sauce was appley – just as you would want.  At almost the same time the place started to fill up with folk out on Friday night for a bit of R & R Spanish style.  Funny thing people, they really do make or break a place.

Boqueria is named after the famed market in Barcelona known for its superb food and wine so there are expectations here and to be fair it does well on many fronts.  Anybody brought up a diet of seventies sitcoms will know that saying that something is from Barcelona has certain connotations.  The Spanish service is charming, the proprietor not remotely like Basil Fawlty.  The main bar is inviting and draws you through to a bright, larger space at the back with good lighting and a giant blackboard with the daily specials marked up.  There are plans afoot to expand to appeal to the yummy mummies of south London by using another good sized and contained space downstairs, showing the odd child friendly film and in time have a soft play area.  This I could see working very well, it seems the natural way forward during the day.

Now back to some of the food.  There was one dish we wouldn’t have again – Pechuga al Jerez con Jamon y Champinones.  This was chicken breast with ham, mushrooms and sherry, which didn’t taste much of sherry (which is surprising as they have some superb sherry by the glass on the wine list) and the meat was rubbery and over cooked, so one to avoid in my view.  BUT as it takes away in enjoyment it gives back twice as much in other areas.  We enjoyed some very light Bunuelos de Bacalao (cod fritters) that tasted fresh and were beautifully presented.  And so to one of the other stand out dishes, a dessert: Tarta de Santiago an almond cake served with an oil slick of chocolate sauce.  This tasted as if my aunt (if she was Spanish, she is not by the way) had cooked this with all her love to her favourite nephew for passing all his exams at school.  It had a welcoming way about it.  Rich and light at the same time with just the right note of almond and plenty of the decadently rich chocolate sauce that puts its arm around you and says “well done, you deserve this”.

So for somewhere that has only been around for 5 months I think Boqueria is doing well and trying things out, as they should.  The prices are very reasonable.  This is first and foremost a locals’ place so locals should and I’m sure will tell them if something does or doesn’t work.  I really enjoyed the food (mostly) good selection of wines the ambience and the staff although I’m not sure if any of them are called Manuel.