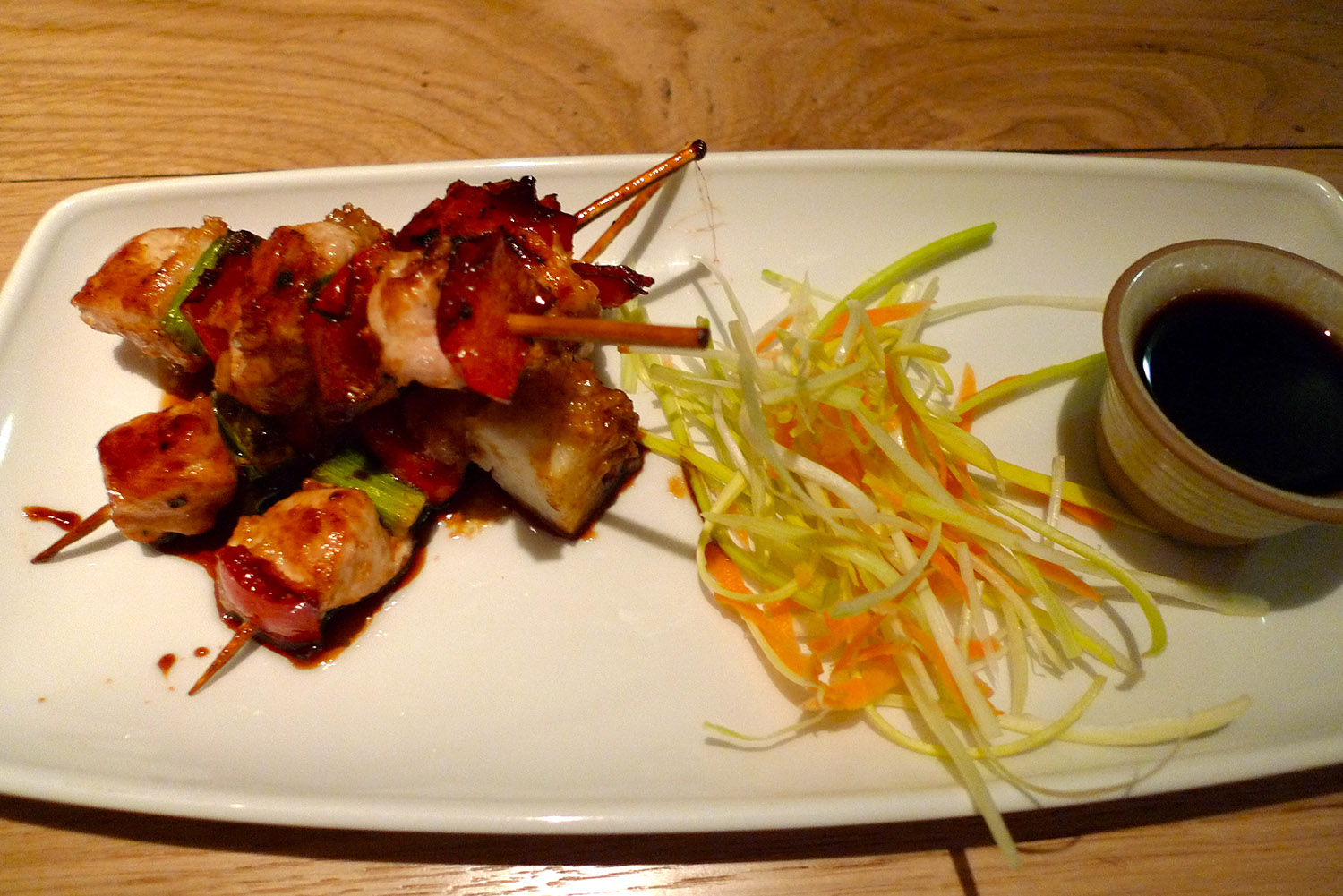 There are now over thirty braches of Giraffe, but this is my first visit.  The super cool interior with lots of booths and nooks and crannies is a haven for children.  With friendly staff and menus that cover a lot of ground it has much going for it.  We visited the Stratford Westfield Shopping City outpost.  This is right next to all the Olympic buildings and even now was buzzing with anticipation.

The thing about Westfield as I written before is that it is enormous and one visit is not nearly enough, this was to prove prophetic with the menus later.  We had chosen to go after all the shops had closed on a Sunday evening – though you wouldn’t know it.  The place was buzzing as all the eateries and cinema screens are still open so it’s very much alive.

So into the jungle to hunt for food, I was pleased that the menu isn’t tied to one genre.  There were influences from Mexico, Japan and the other parts of the orient as well as the Middle East and journeyman stuff like steaks, pasta and a selection of burgers.  If anything the menus (for there are quite a few) are a bit on the long side.  But no matter, this is a place to be sociable with your family or friends.  The children’s menus (yes there are two of them) one for under 7’s and one for young adults are really good at gauging their audience.  For example the young adults has Pasta Pomodoro served with Garlic Focaccia for less than £5 and Steak and Chips with Salad for £6.25.  These are smaller portions than usual but I think this is a smart move.  How many times have we as parents had to ‘dissuade’ one of our children from trying to order the most expensive dish on the menu just because you are having it?  I’m thinking quite a lot.

There are some fun cocktails for adults and kids alike.  I especially liked my son’s choice of Mango Mama, a delicious confection of Mango, Strawberry, Banana, Orange and Apple juice.  Sweet, but not too sweet and very refreshing.  I had a twist on an old friend, a Pimms Mojito Cooler, which allowed me time to peruse.  An oriental start was a good way to get things moving.  Chicken Potstickers (little semicircular dumplings) and Grilled Yakitori Chicken Skewers both came with different Soy Sauces and tasted pretty good and looked pretty good too.  A children’s portion of Fish and Chips (haddock if you want to know) was very generous but our 6 year old managed all the crispy fish only after he had consumed every single chip with the necessary Tomato Ketchup.

The buzz that is ‘Giraffe’ is quite infectious, before long I found my foot tapping to hits of the 60’s and 70’s played just loud enough to hear but not intrusive – a feat almost impossible to pull off.  I was starting to enjoy myself – so were the family.

Other notable food that arrived, a Hot Thai Duck Stir Fry was spicy and authentic.  Chilli Beef Enchilada could have had a touch more chilli for me but if a youngster ordered it maybe it would be too hot?  There was a nice twist to Corn on the Cob – Grilled with Chilli Butter and a sprinkling of cheese.  Soon there was nothing left.  The choices available here might seem a bit ‘random’ as my 12 year old would say but I think that if you all have different tastes then it’s a god send to have the variety.

Baked White Chocolate and Passion Fruit Cheese Cake looked marvelous and half a Passion Fruit with the seeds dripping down enhanced my pleasure in eating it no end.  A Banana Waffle Split lasted just seconds as we ate it ‘locust’ like.  There is also more standard fare in the form of 99 Sundae, which our 6 year old felt very comfortable with.

Most of the starters are in the £5 region, the mains (of which there are many) range between  £8 – £15, they also do an extensive breakfast menu – and of course a brunch menu as well.  I had really enjoyed being in Giraffe and as I mused over gourmet coffee and tea menu I couldn’t help but think that they could make life so much simpler for themselves if they consolidated the menus.  Giraffe is a bit like its namesake, not wild and dangerous but more, friendly and slightly gangly – I say stick your neck out and take the kids, it would be a really good place for their birthday party or a catch up with old mates (and a chance to listen to some old friends too).  But you will have to go more than once to get through those menus!