Between Exeter and Plymouth is a small village called South Brent on the A38. Off a smallish county lane you will find the entrance to Glazebrook House Hotel. The gate pillars are old and as you wind up the drive you haven’t got long to wait before you are greeted with the large imposing house. And it was originally a home with royal links on the Queen Mother’s side. It’s the sort of country pile you’d be expected to stay at for a weekend with an affluent relative, you know the sort of thing, long walks, big breakfasts, roaring fires, giant AGA in the kitchen and wooden floors and paneling, brandies. Well this place has all of this and more. 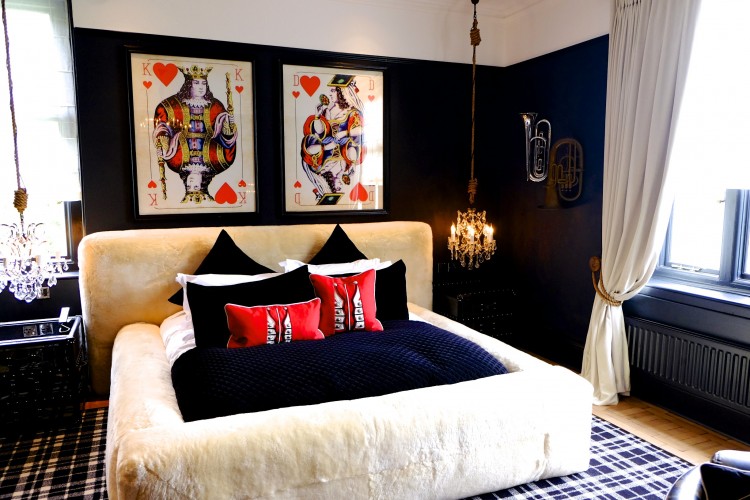 Pieter Hamman was looking for a retirement project with his wife, a small B & B in the country maybe, something to keep them busy but not overrun with work. Pieter who originally hailed from South Africa found his way to South Devon via California, the Far East, New York and numerous other locations decided to buy what was then a small B & B. All going according to plan so far, then his love of people, ridiculous deadlines and sheer energy just got the better of him. 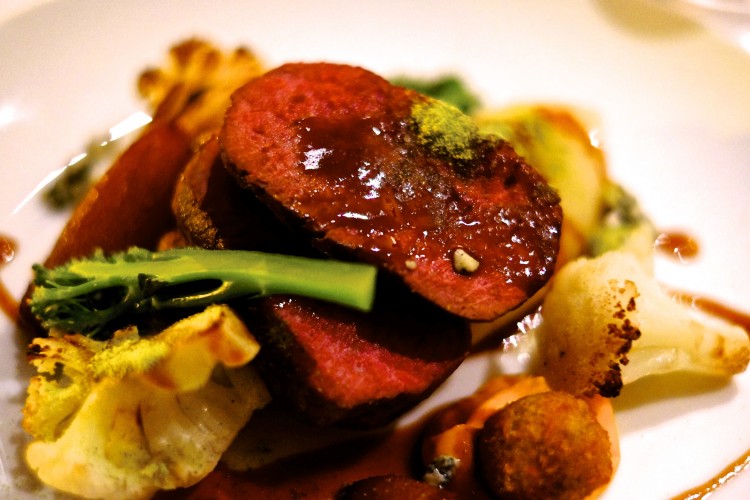 In came top designers, craftsmen, excellent staff (including his daughter Gita who does all the marketing for the hotel) and a whole lot character was born. No longer was this a little project, this was a main concern with large spacious rooms decorated in a stylish and contemporary fashion with statement art everywhere. They hold weddings, family celebrations, company meetings and having only eight rooms means it is often block booked (you definitely need to reserve a room before a visit). 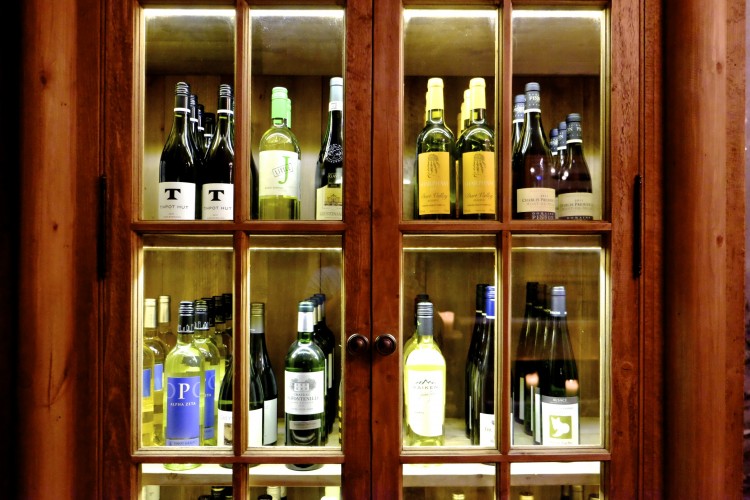 There is a theme at work here that wouldn’t sit so comfortably in a larger residence. All the rooms are named after characters from Alice in Wonderland. I was staying in the Cheshire Cat Room (one of the biggest). It was splendid, with a giant Über soft but firm bed, a huge walk in double shower and enough space to swing several Cheshire cats. There are other quirky names, Mad Hatter, Gryphon, Jabberwocky and of course White Rabbit. 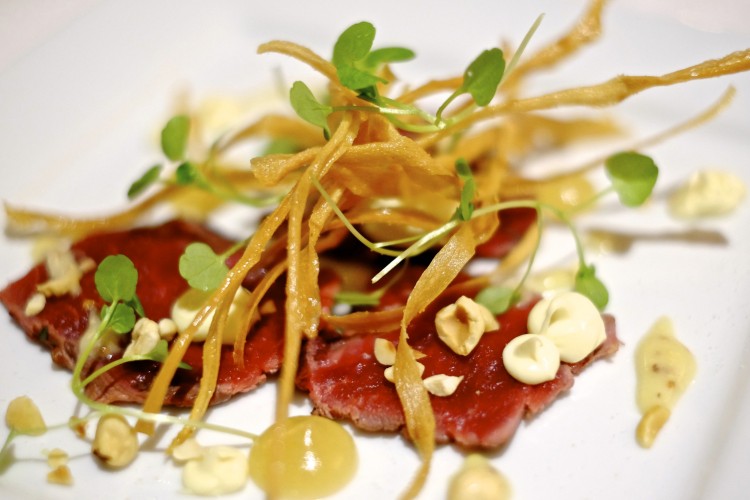 Chef Ben Palmer oversees the kitchen, that name may be familiar to you? He was one of the finalists in Masterchef The Professionals a couple of years ago. He hasn’t lost his touch. I expect him to go far in the culinary world – he will be in high demand such is his considered and skillful hand in the kitchen. 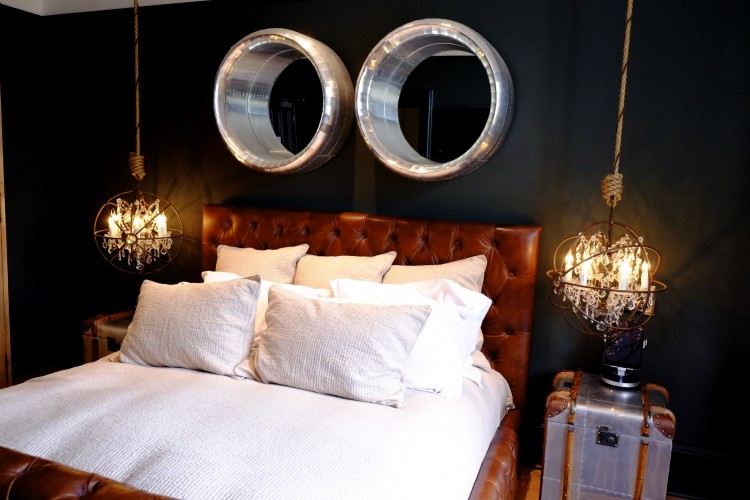 My first night (after a long drive through London traffic) was bliss. The enormous lobby greeted me when I walked in and then Frankie said, “Hello, are you here to check in?” from behind reception which was really an aluminum wing of a plane that was being used as a desk. The place is quite surreal at times. I loved it at first sight. Straight away it had the feeling of one of the better modern London clubs but without the ‘jostling for position’ group of media types in your way. This was calm but cool and just a bit groovy. 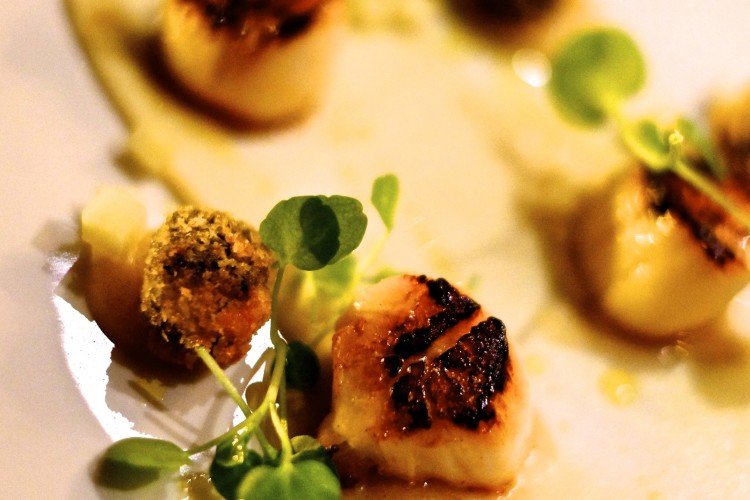 My room was upstairs (they have one large room downstairs designed specially to cater for disabled guests which has a giant shower for wheelchair access) once I’d got over the size of the TV (enormous) I lay down on the bed – I very nearly fell asleep there and then it was that comfortable. 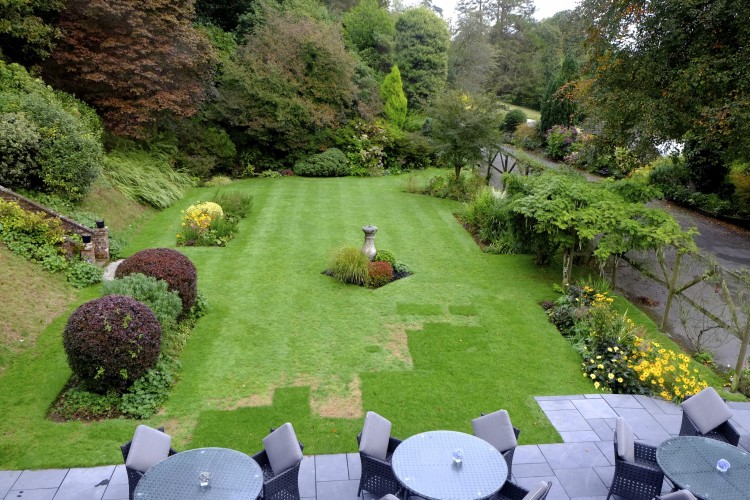 Before dinner I was shown around the place and had the history of the six-month conversion explained. They did a tremendous amount in that time. But there is still more to do, Pieter has plans for treatment rooms and a sauna as well as landscaping the charming and rambling garden. They hold wine tastings here every week a room has been specially created for this which is lined with cabinets full of wine and whisky. The large bar is inviting and seems to sell everything you could possibly want. The wine list is good too. 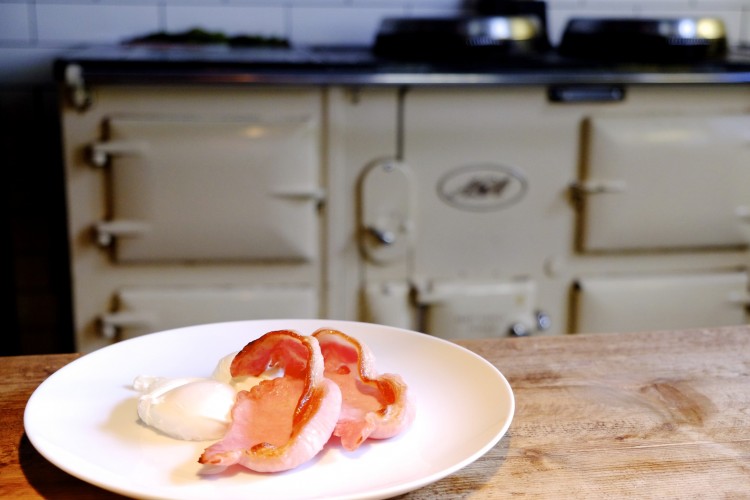 My dinner was started with a little amuse bouche of smoked haddock ball with smoke all in a preserve jar you open at the table, very tasty and fun too. Gita joined me (this really is a family effort) and we ordered pan-fried local scallops, black pudding fritters with cauliflower puree and a touch of watercress with crisp apple. This was a dish of textures and balance. Ben created a plate of food that was not only great tasting but even the puree was hot (that never happens!) Gita tried a new dish (the menu varies slightly each day) pan-fried cod fillet, crispy tail, wild forest mushroom and teriyaki risotto and coriander shoots. This was another triumph. Fresh fish and an unusual risotto all cooked just right. 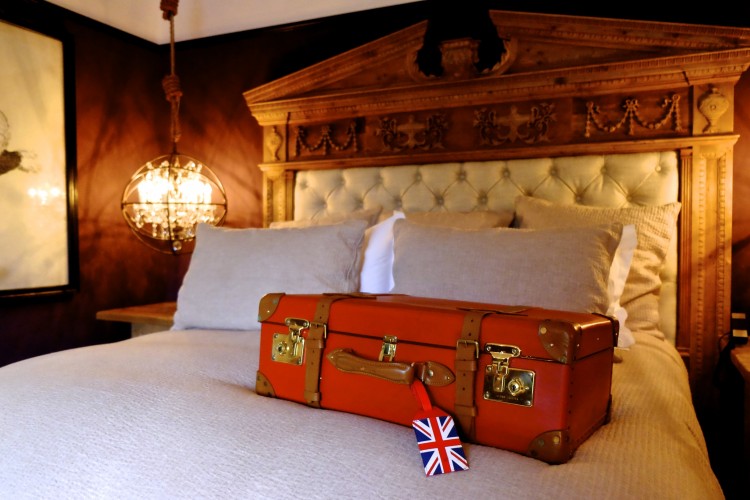 I asked Gita what it was like working for her father in such close proximity. She didn’t seem to mind, nothing seemed to faze her. A life much like her father’s, living in various glamorous hot spots gives you a good training in dealing with a variety of challenges I guess. What was coming through though was this family’s dedication to not only getting it right but to top quality everything. No expense has been spared with this phoenix of a hotel. 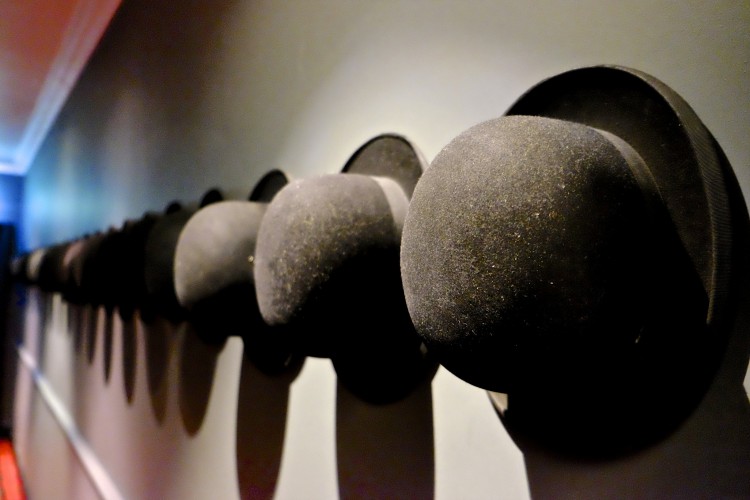 My main of roasted venison loin and hash was perfect in every way. There was a roasted pear and some creamed potato in there as well but it was the virtuoso of the venison that sang the loudest. Ben really has a handle on classic dishes presented in a modern way. He is clearly a chef who is comfortable growing. 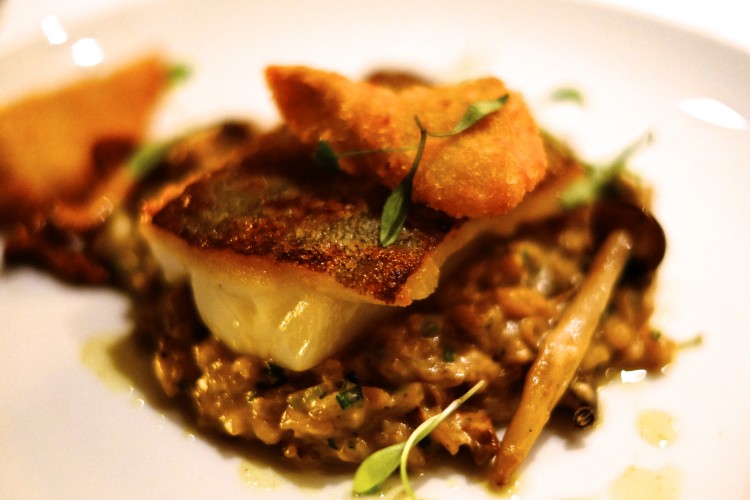 We were full but tried a few samples of dessert. All tasted good or better than they looked. Gita tried to eat the hot chocolate fondant (this must be the most popular dessert for women in the western world – they all go for it) but failed, I enjoyed the Eton mess, light and fluffy. 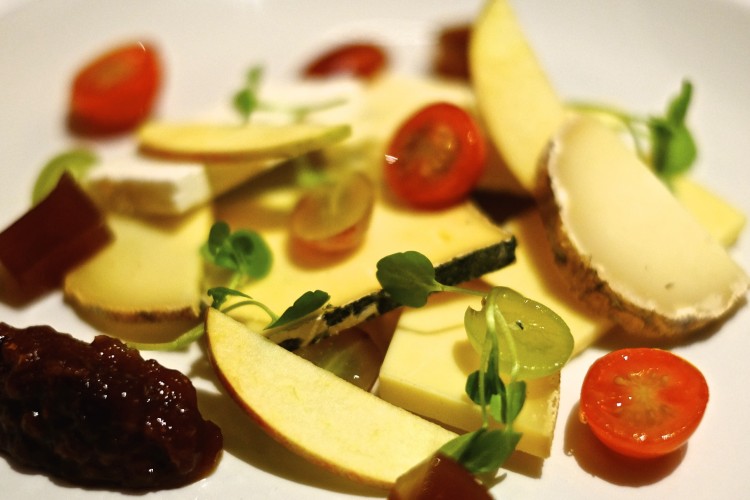 The rhythm of the hotel is one of a gentle sway. As if you were at sea it just cruises on smoothly. The staff are local and delightful and nothing is too much trouble. If you wanted to go further afield then Dartmoor National Park is literally on the doorstep or you could cram in a bit of fancy food shopping at the Dartington Shops, a local initiative providing a wealth of local produce and services with vision of providing a force for positive social change. Working with farming communities and art galleries to help enrich local lives. As well as that they also have a brilliant food shop that sells the most amazing cookies, sauces, drinks and killer fudge that is so creamy it just slips away in your mouth (I speak from experience!) Situated in an old cider press near Totnes it is a must visit if you are in the area. 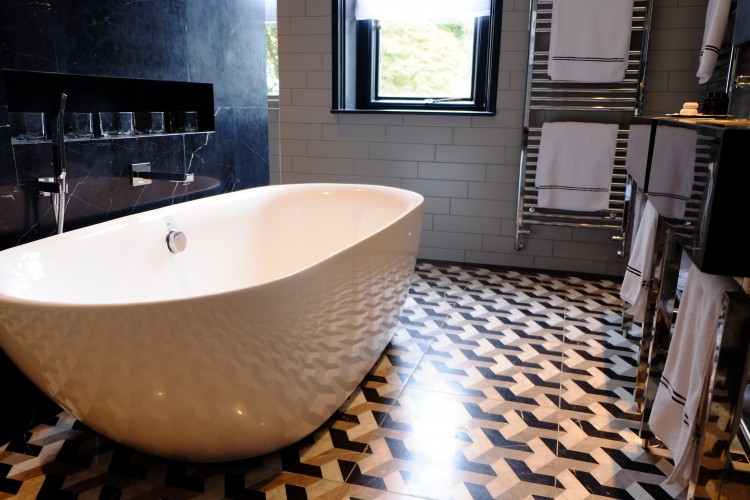 As well as sleeping like a baby with all that country air I managed to fit in a brilliant bread-baking course with David Jones at Manna from Devon Cooking School in Kingswear not far away. I had other great meals at Glazebrook, their breakfasts are made of tasty local produce and can be served in the kitchen with a four oven AGA to keep you warm. 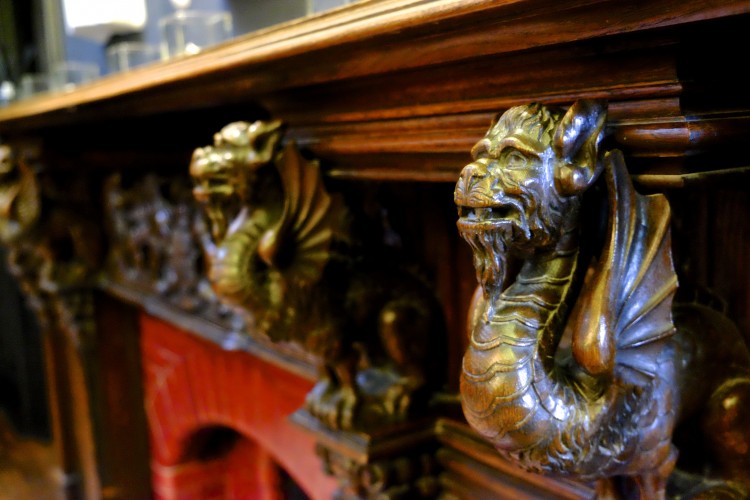 If South Devon is your destination suspend belief for a moment and imagine yourself falling down a rabbit hole, you will soon find yourself in a wonderland. ‘Who stole the tarts?’ It was probably you nobody could cast blame, as everything tastes so good at Glazebrook House! 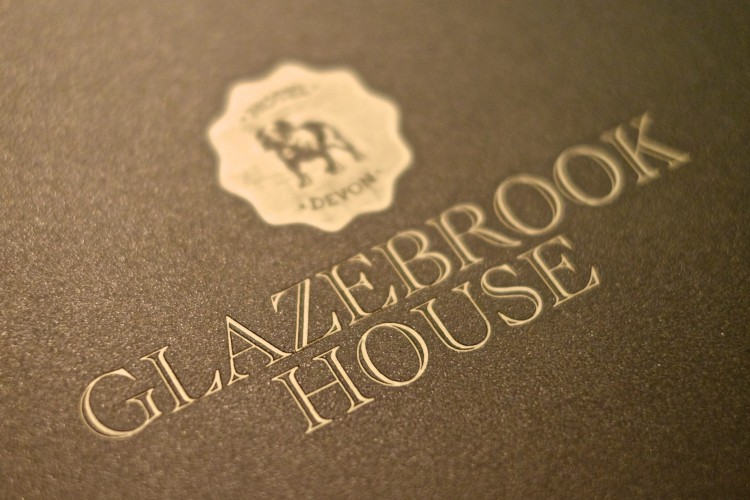