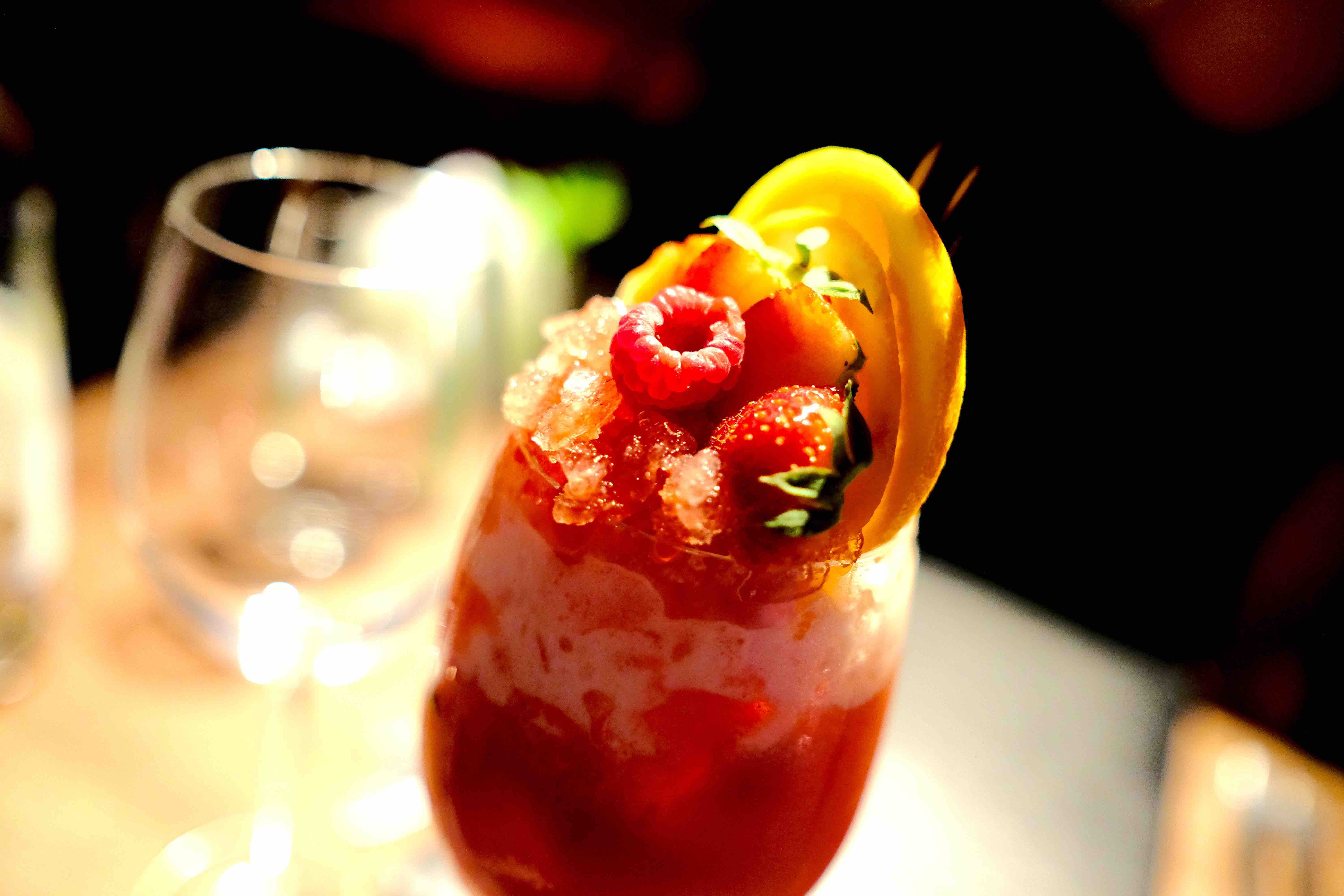 In this outing I have a try at living a little like James Bond (well almost) and spend an evening with some simpering girls who really know how to turn heads with their dancing, enjoy some excellent steak and learn some history about one of the performers of The Hippodrome of yester year.

My menu read ‘Our restaurant is named after the flirtatious and alluring Claire Heliot, one of the early performers at The Hippodrome in the early 1900’s’ it goes on to say that she was a lion tamer with no less than 14 animals under her spell. I wondered if this rather swish restaurant would live up to their hype and the steaks pass muster.

The first thing that is cool about this place is you have to go through the gaming hall of The Hippodrome to ascend the stairs to the restaurant. It has a real Las Vegas feel to it. Roulette wheels whirred the card tables bristled with tension. This was the real deal. 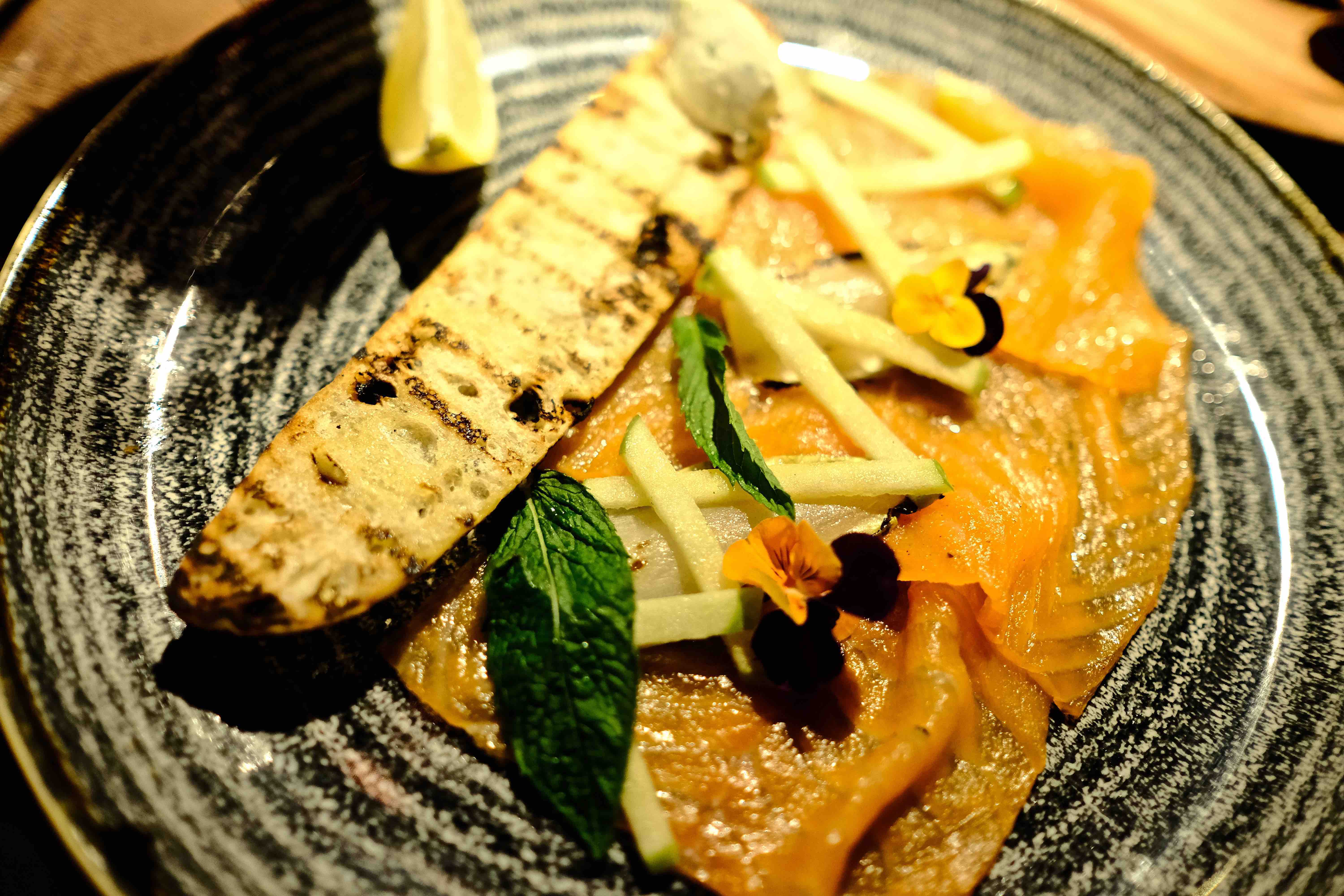 My dining companion for this elegant evening was J, who had arrived early so was there to greet me. She loved the place already “isn’t this fabulous, we could be in Vegas”. The lighting was suitably late night with spots on the food only. Carmine our waiter helped us through the cocktail menu. We plumbed for Split Bet a sweet raspberry number and a classic Mojito – both very good and suitably swanky J thought they were ‘potent’. 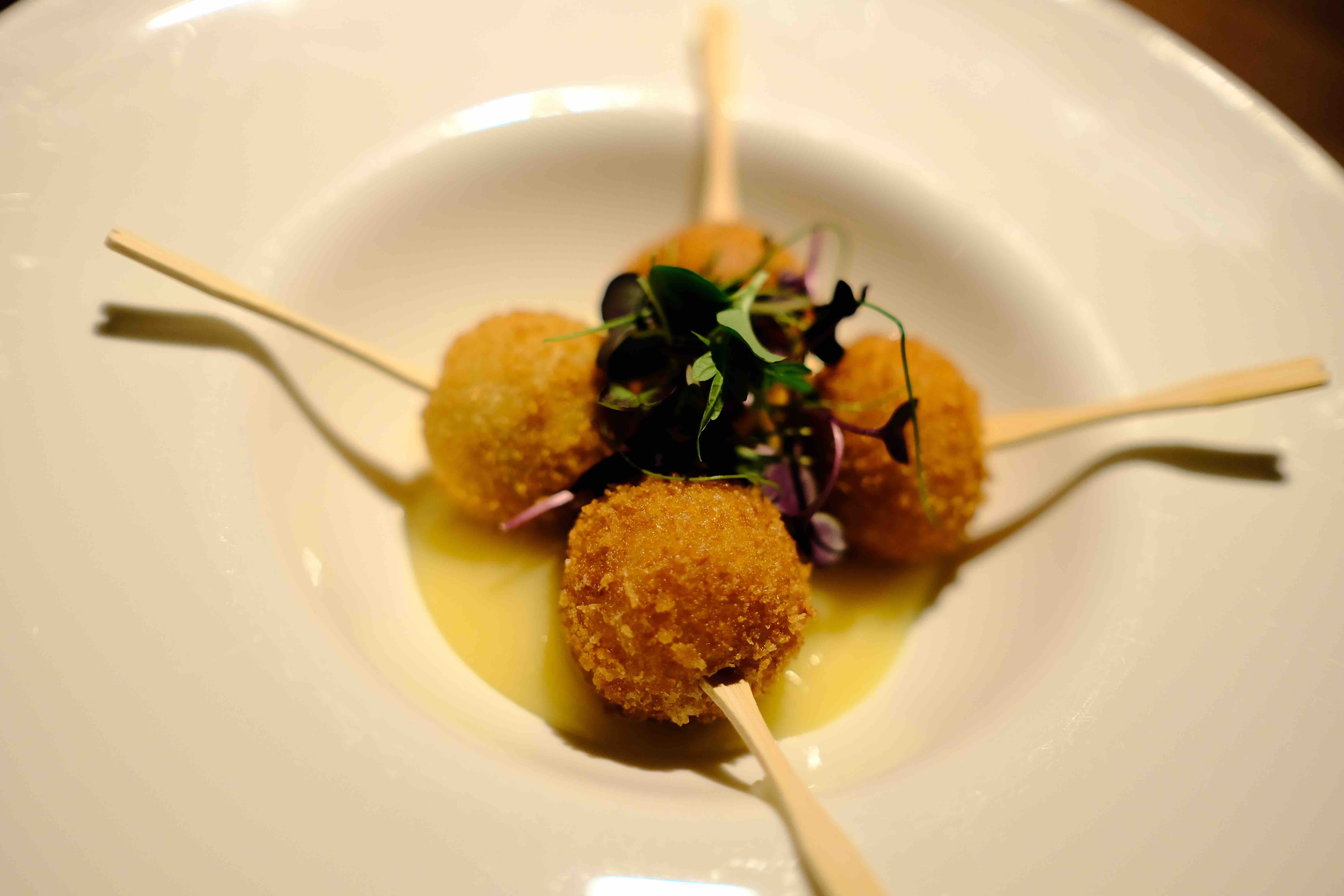 Starters made their way to us in the form of an excellent smoked salmon with green apple and sour cream and the rather intriguing goat cheese lollipops. The salmon had real flavour, smoky and thickly sliced. The lollipops were indeed breaded goat’s cheese balls on sticks resting in lemon curd. Sounds weird, but it worked. 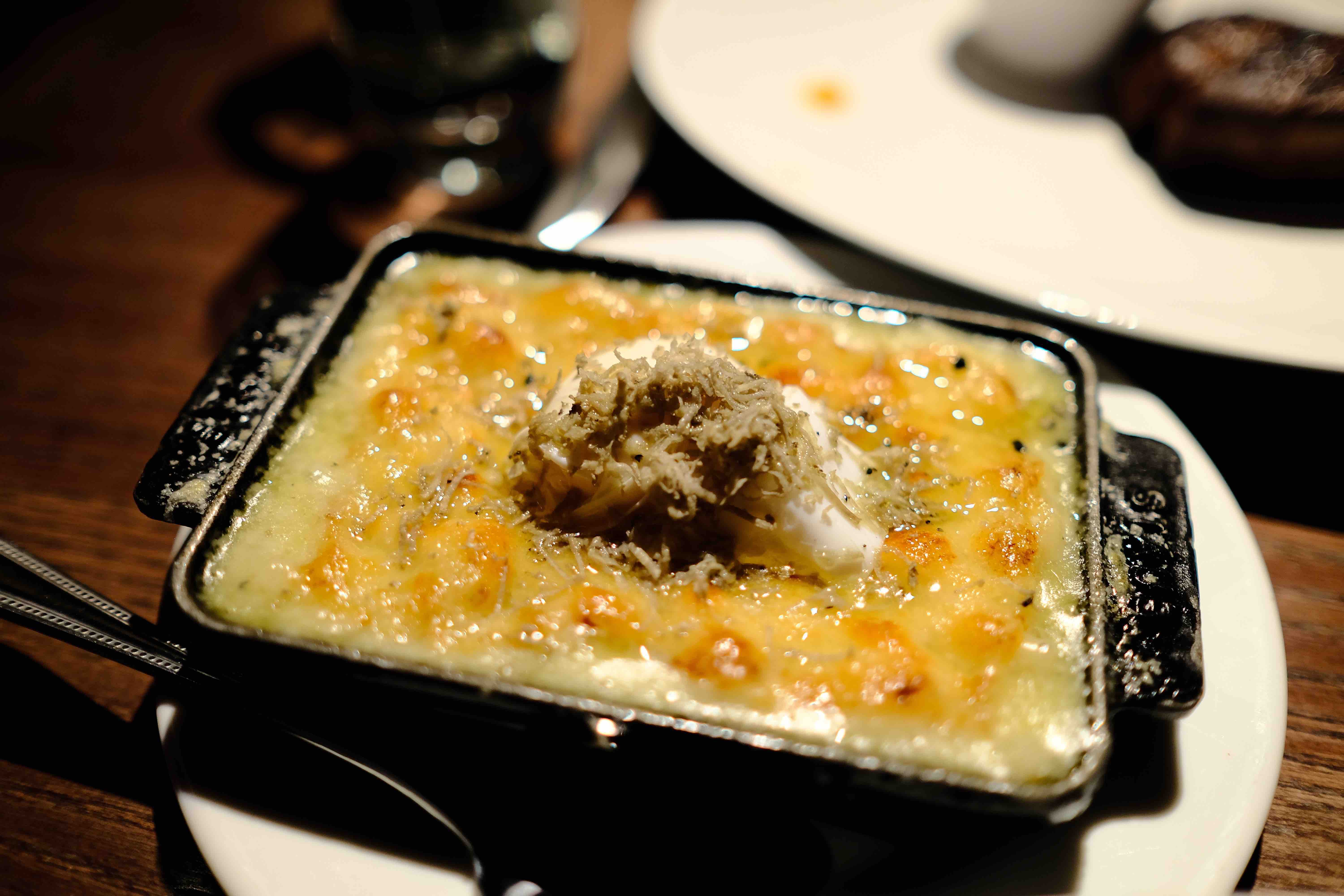 J was delighted to see that the menu catered for ‘girl’s sizes’. The steaks are available in small, medium and large which, depending on your choice could vary between 7oz and a whopping 23oz! Being a steak house they have rump, NY strip, fillet sirloin, rib eye and T-bone. There are sauce options as well, J went traditional and had béarnaise, I was feeling cheeky so had two, chimichurri and truffle. Well, why not they were only £1.50 each. If you’re not in the mood for turf then there’s surf with fried salmon, prawn linguini, sea bream or grilled lobster skewers to tempt. 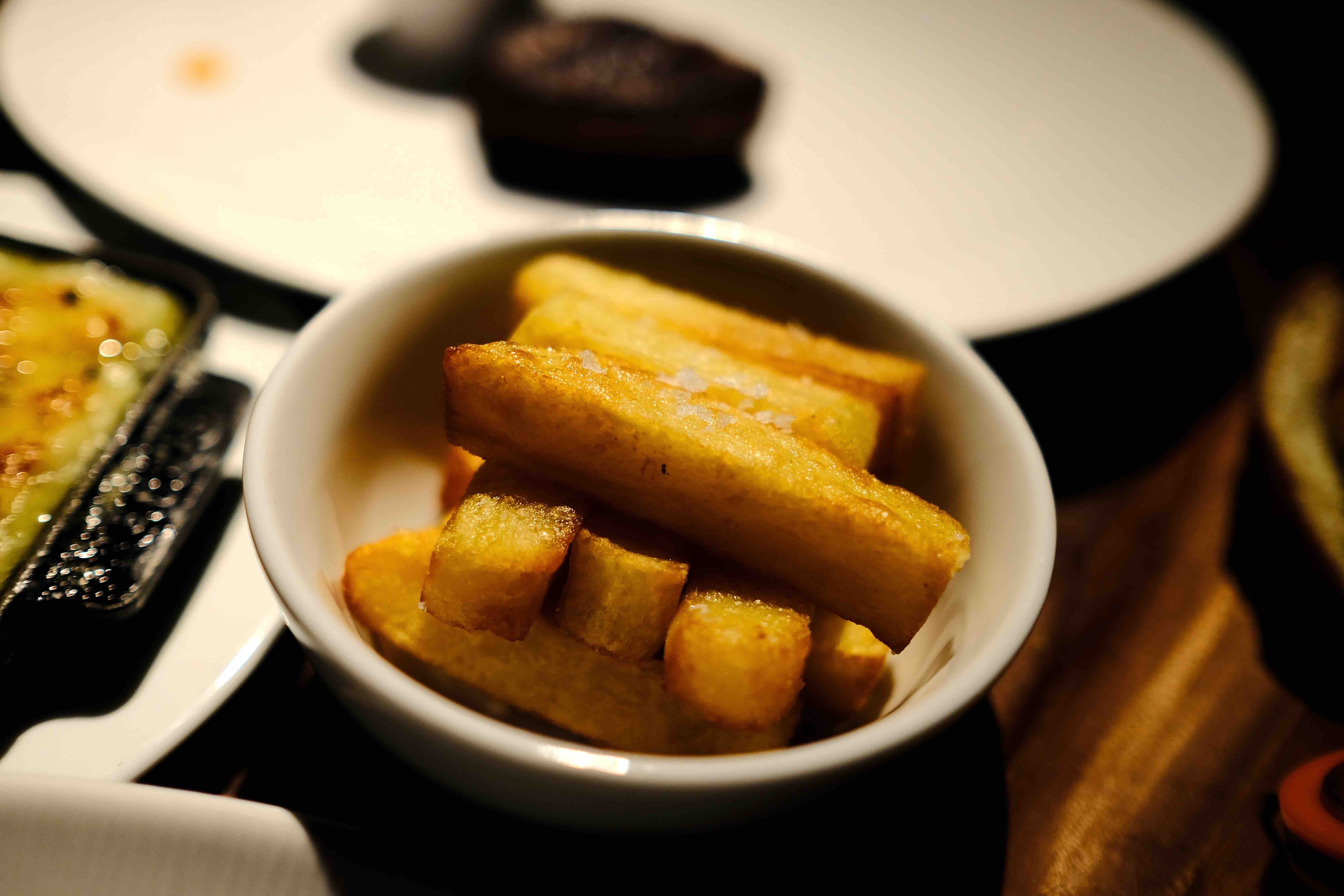 As we tucked into the meat, very good triple cooked chips and superb millionaire’s mac ‘n’ cheese (it has black truffle in it) the music suddenly changed tempo. 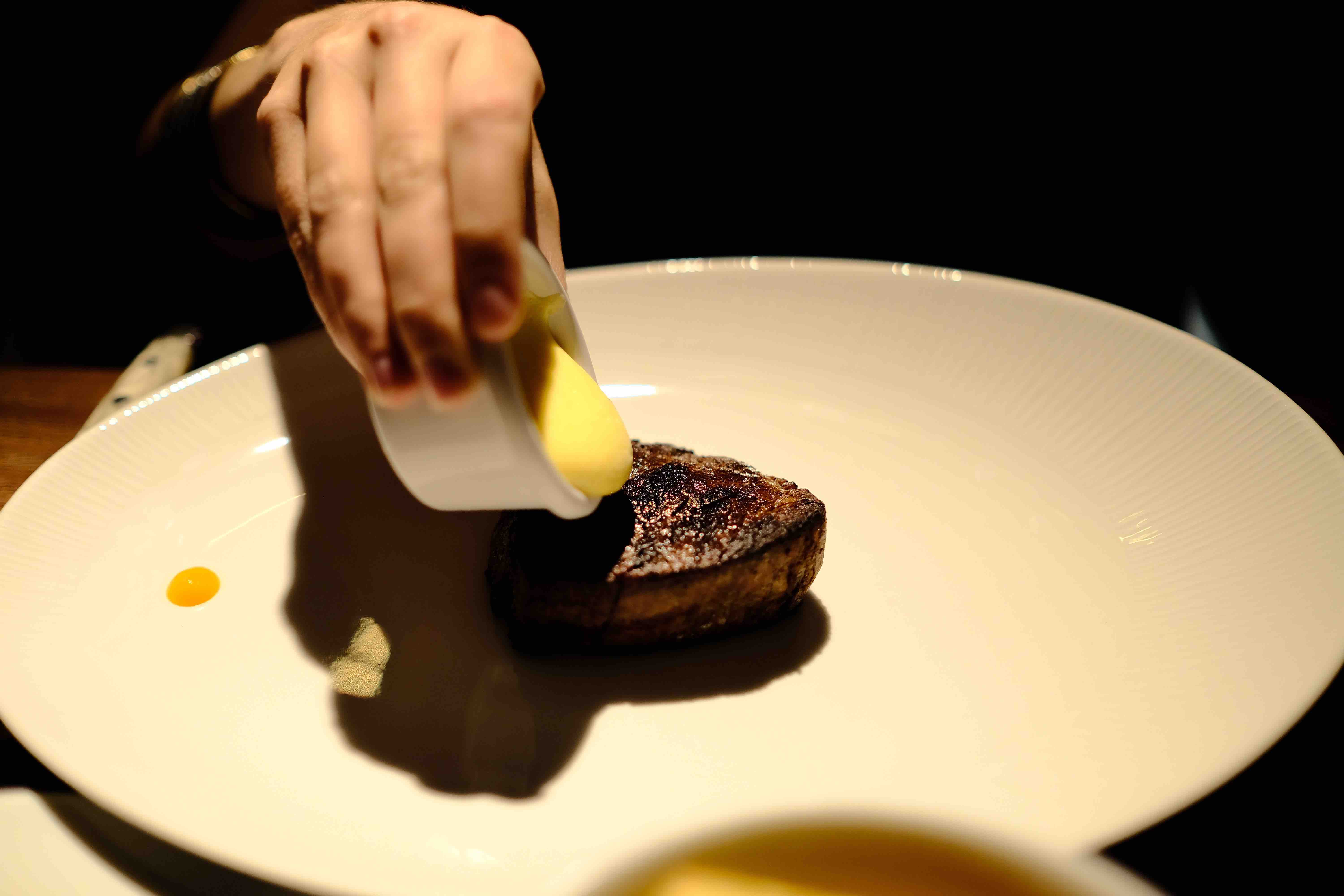 Gone was the cool late night music and on came a couple of dancing girls wearing very little and with the spotlights on them performed a raunchy little number. Why? To remind us that there is late night casino in the basement with added entertainment of course an interesting diversion between mouthfuls of fillet and sips of Malbec. 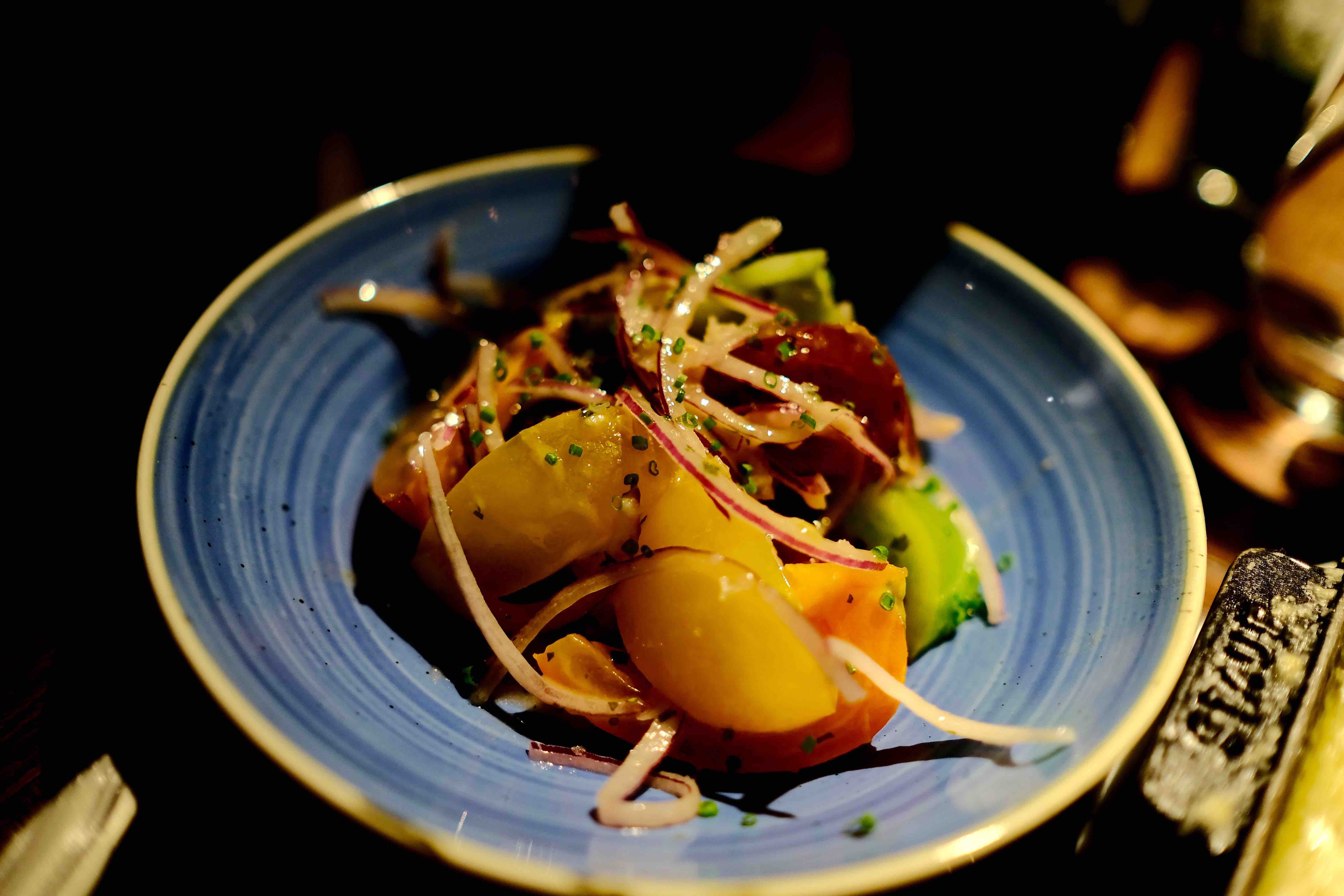 It is another world away from the hustle and bustle of Leicester Square and all its tourist trappings. In true Vegas style there are no windows anywhere so you have no idea what time of day it is (you can go gaming here 24/7). J observed that it was the sort of place you can spend the whole evening. A meal, drink or two in one of the bars then hit the tables and maybe a celebratory drink after? It certainly has an adult only vibe that will appeal to many. 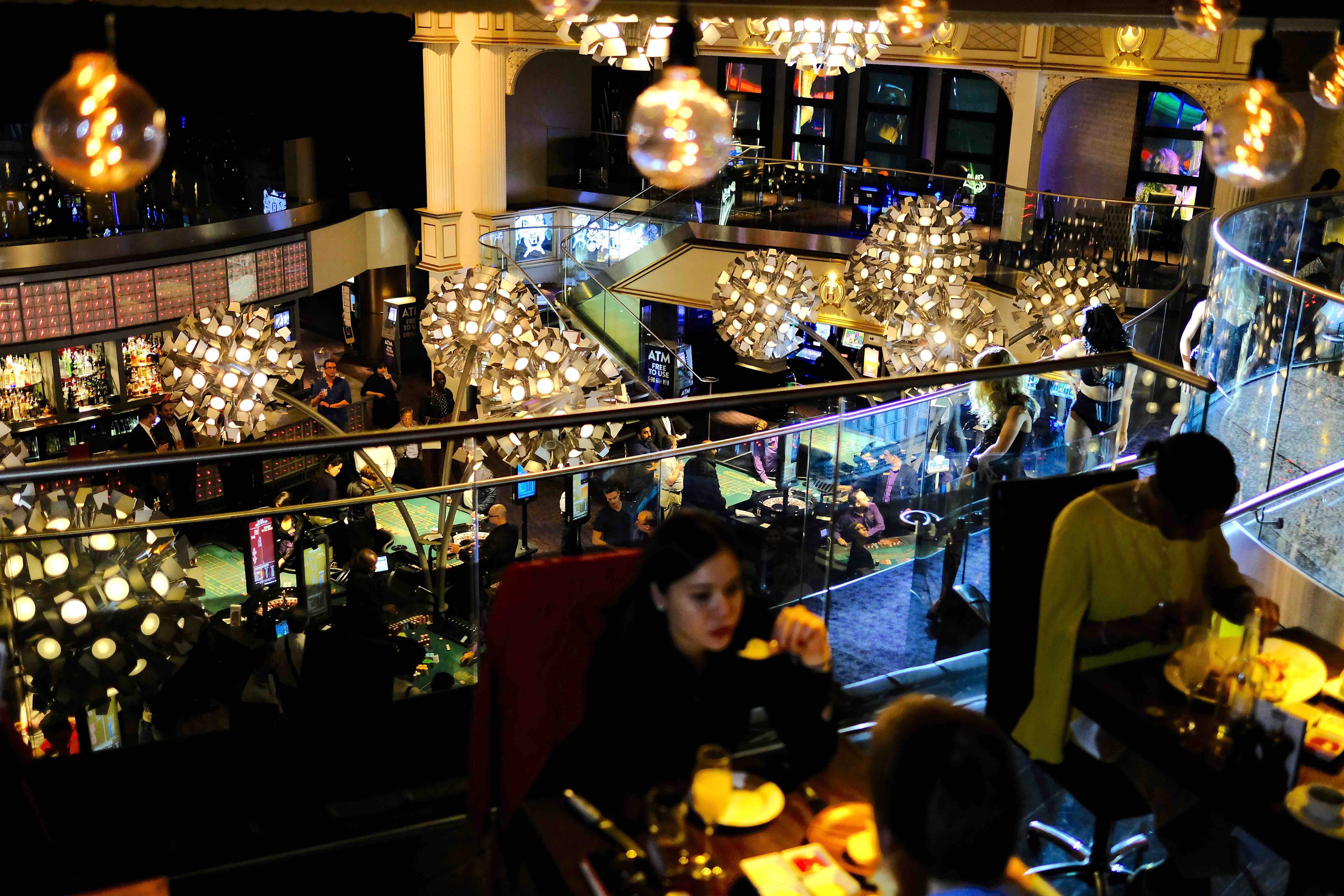 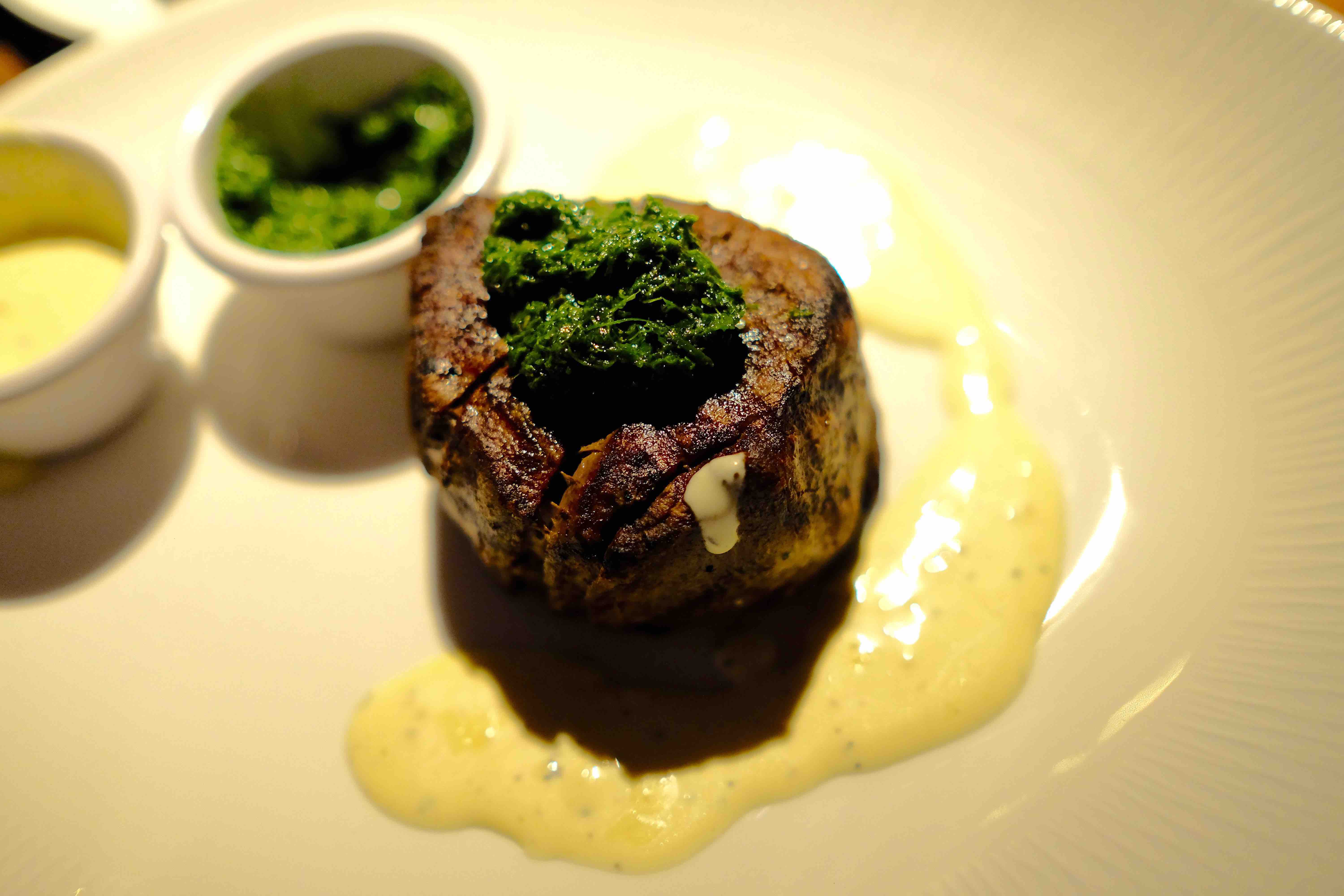 We both enjoyed our desserts an elaborate chocolate mousse and tip top raspberry mille-feuille. Carmine was very helpful with these (he said he had tried them all). His service was attentive but not intrusive in short perfect. 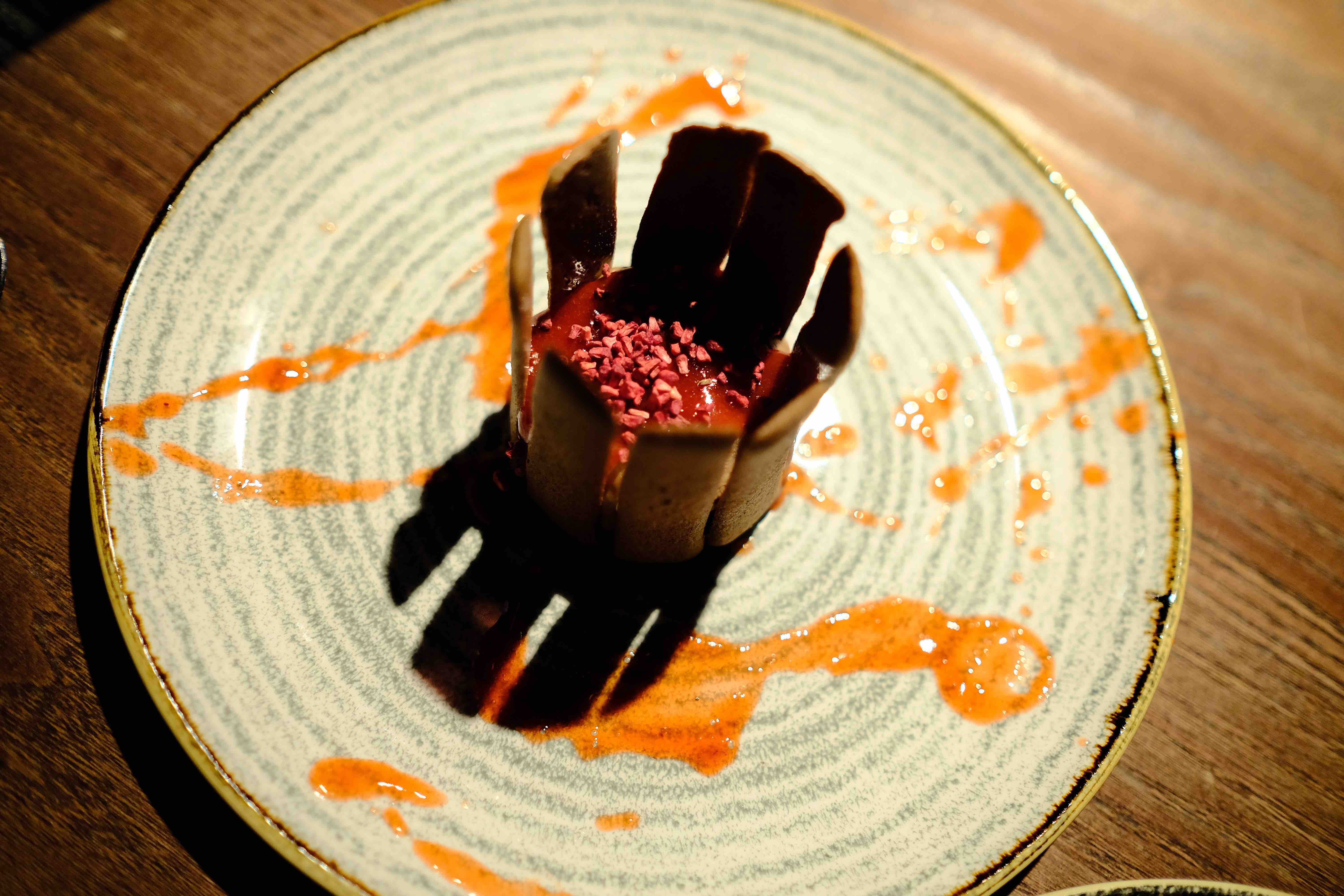 I think Claire Heliot would be slightly bemused at what had happened to her theatre, with gaming tables where the stalls should be and bars everywhere and a restaurant in the gods. I can’t help but think that she would have approved (as they don’t serve lion) and I think the late night dancing girls would have made her smile (as they did me). 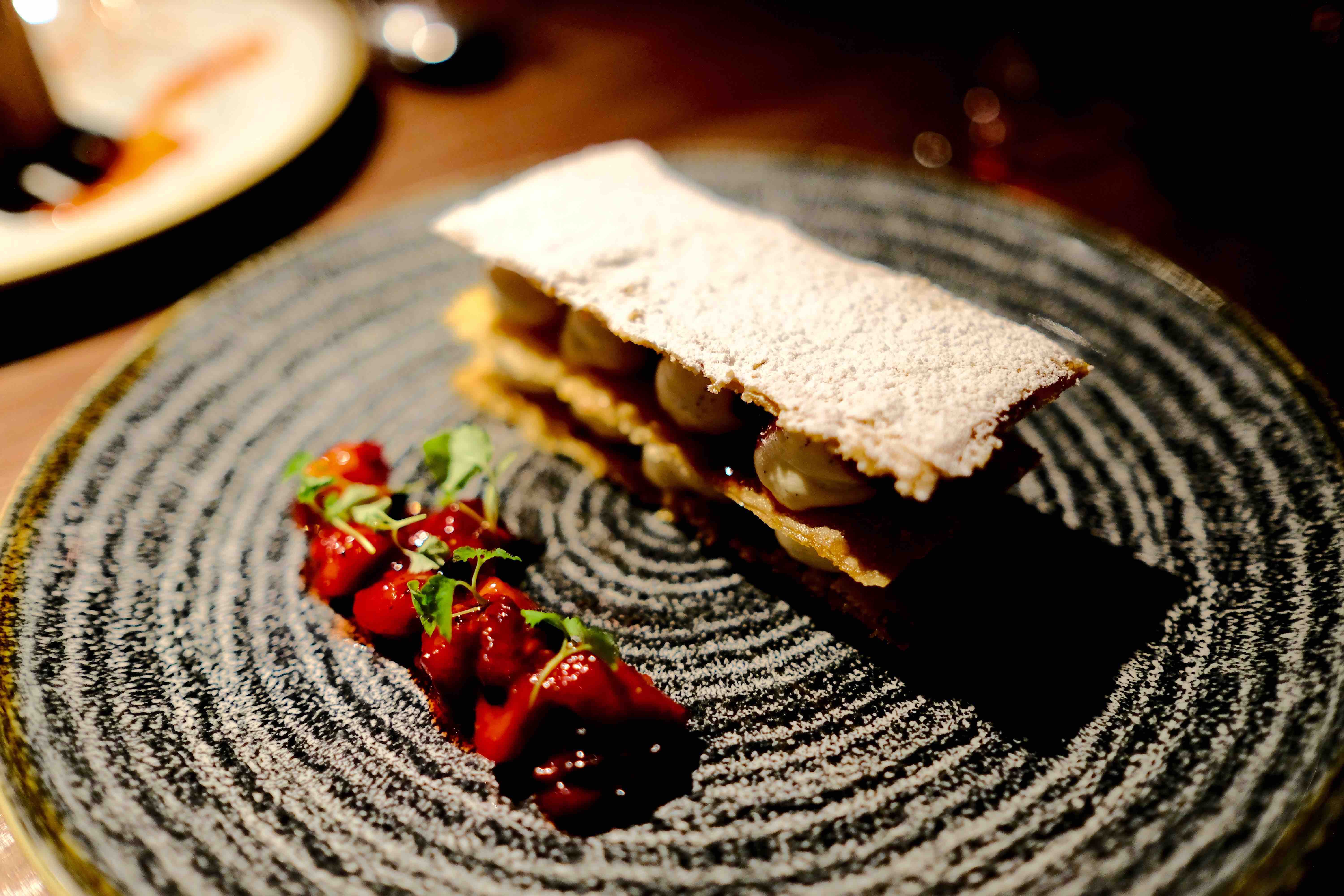 Well I didn’t quite get to James Bond level of high stakes after our beef steaks but I was tempted. There is something about the allure of the green baize, the seduction of the chips and the exhilaration of the chance of breaking the bank. Oh well, maybe next time I’ll eat erlier.