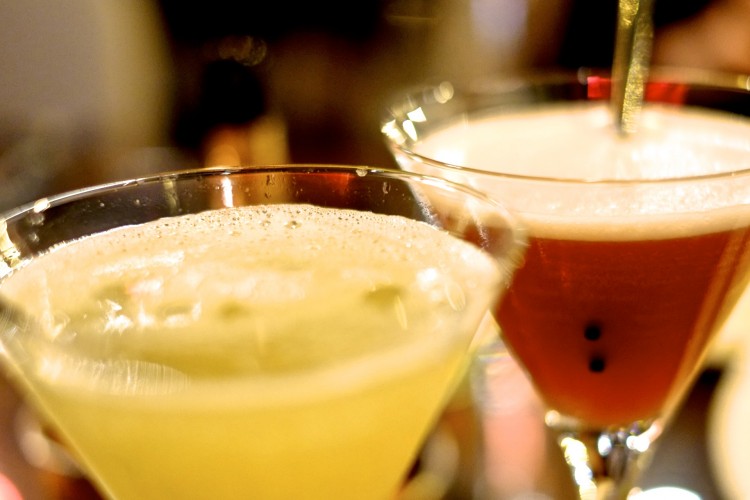 India Per Se is a little gem.  There, I’ve said it right at the beginning.  This is one of my new favourite tip-top Indian restaurants anywhere.  Yes, it’s that good.  With executive chef Saurav Nath, from a Michelin starred background now heading up this recently relaunched Indian brasserie the food is at an extremely accomplished level. 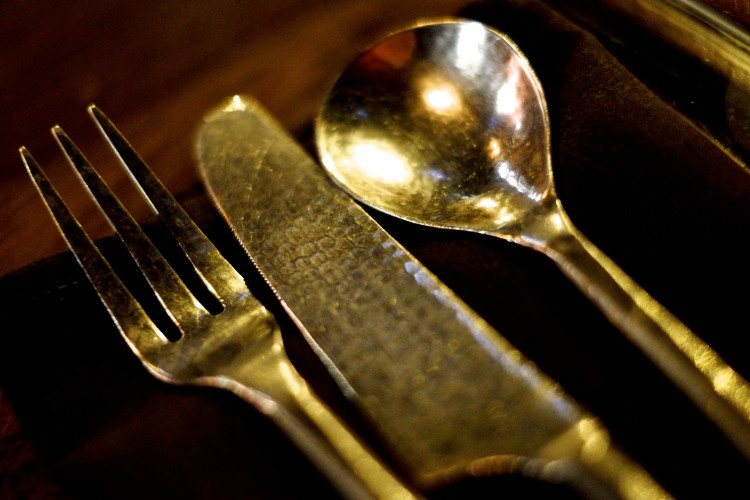 The refit has worked, it is now a slick modern space divided with micro chainmail hanging from the ceiling affording it a bar area, private dining and general brasserie.  With its comfortable chairs, subtle lighting and tables big enough to accommodate the multitude of plates that arrive and an underscore of cool music burbling away in the background I felt relaxed.  We took in the menu, which is comprehensive, about 14 starters and 16 mains.  This was taking us longer than expected so we dipped into the cocktail menu, lots to choose from including the obligatory mocktail for designated driver M. 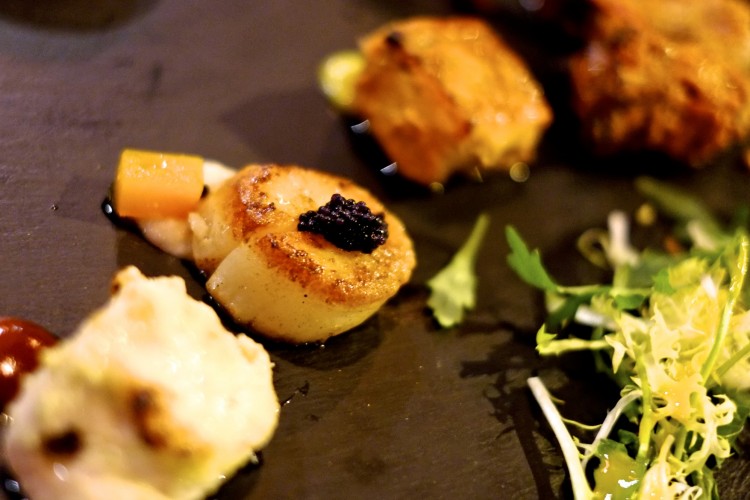 In the end we asked for help and it was decided we’d try a selection of starters and mains.  This was a wise decision, there is so much of merit on this menu. 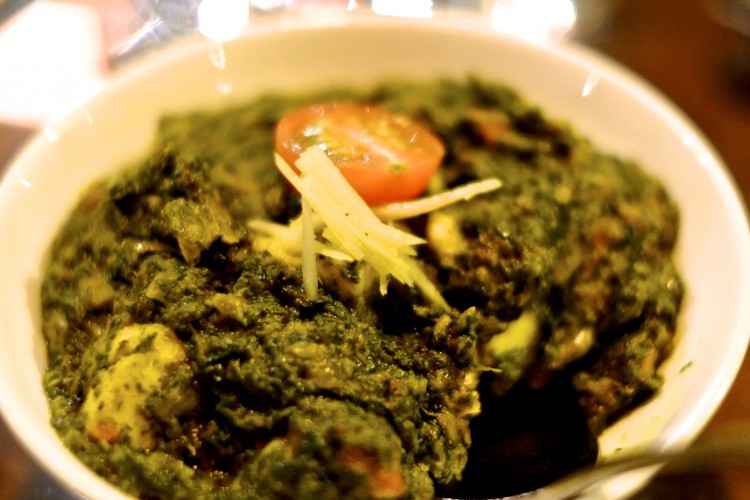 A little amuse bouche of potato fritter and the most delectable spicy tomato soup in a shot glass was first.  Boy was that good, clean and smoky with a tang to the potato.  This was a great start.  The next offerings were on a large slate plate with four starters; Lucknowi lamb chop, tandoori rai machili salmon, murgh mali kebab chicken and a scallop.  This not only looked superb with dazzling colours and smells, but also tasted incredible.  There wasn’t a poor mouthful on the plate (or should that be slate).  The lamb was my favourite but only just.  It had been cooked pink and wore a coat of chilli, garlic and ginger paste.  Looking dashing in all its finery it delivered on the taste front as well.  Hot, tangy and very moreish.  But all deserved their place in this fashion parade. 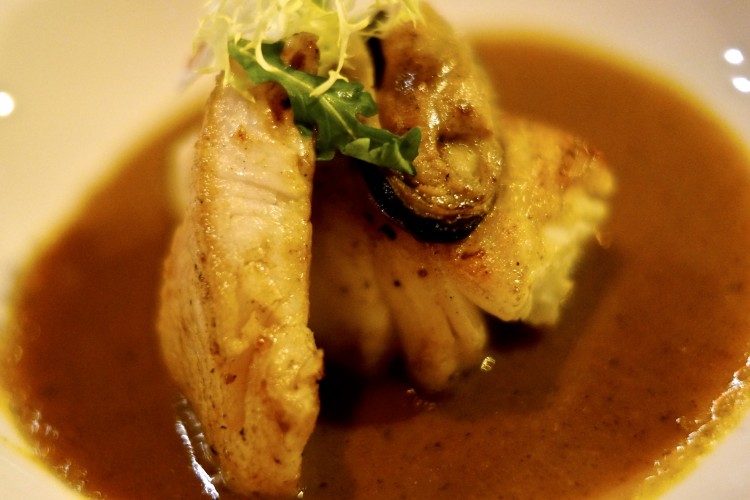 A fish course kept us busy as we waited for the mains.  Mussels, squid, clam and cod all cooked in an exquisite Goan coconut sauce were really very good.  The mains, which arrived together with aplomb had me wanting to try everything at once, such was my enthusiasm to taste it all.  A slow pot cooked lamb shank took my fancy it had been kept creamy with yoghurt and punchy with spices.  A meal in itself, I enjoyed it very much.  Another unusual dish was a tandoori roasted cottage cheese with zucchini spaghetti in a kadai sauce.  This was glorious.  The cheese was firm and had texture; we both ate the whole dish very quickly.  When out with M we can always sniff out the best dishes so they always disappear first.  A few other bowls were also good along with some fine breads I particularly liked the chilli naan. 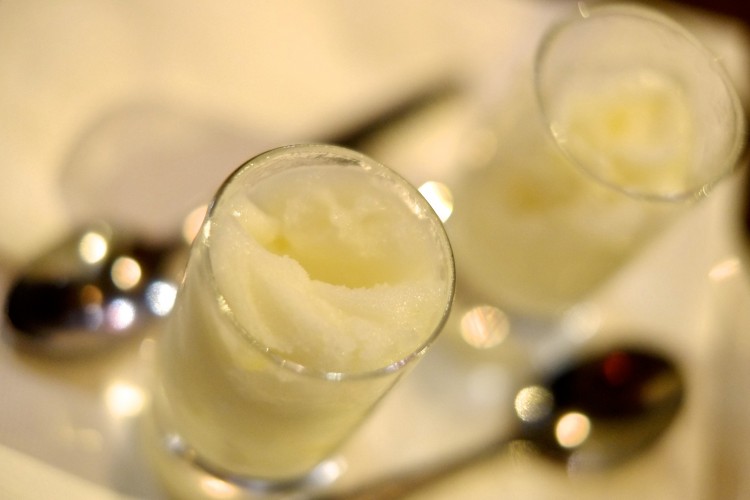 The sides should as the fairground saying goes get their own show.  An excellent kali dahl, slow cooked black and brown lentils in a creamy sauce was divine and the garlic and cumin sautéed spinach puree with cottage cheese (again)! was up there with the greats.  I just love spinach cooked in this style, so tasty and rich and good for you.  Win win. 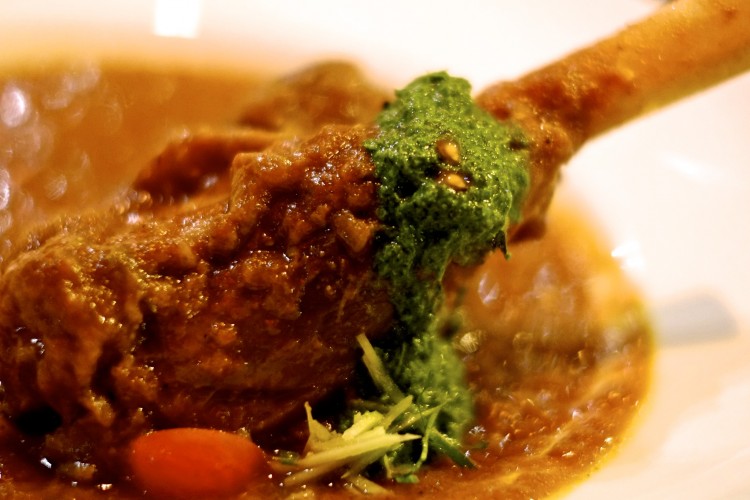 Our dessert had all the promise of the East, apples, sorbet made with the nicest raspberries I’ve had in years and the show stopper, a chocolate mousse made with garam masala.  I have not had this before and it came as a surprise when I first tasted it.  Expecting a rich chocolate flavour, as I tasted it I had strong spices, then as quality will always shine a full on chocolate hit.  Very clever and cunning to save this until the end, I applaud Mr. Nath for his creative flair and not giving everything away in the menu. 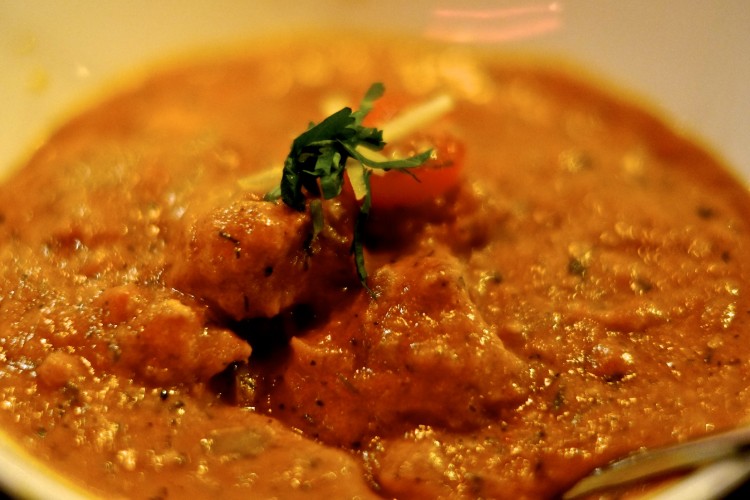 This is a restaurant of style, form, function and taste.  It sits above many without trying too hard at all.  I feel this is a place we will hear more about because put simply, the food is so good.  If you have the good fortune of living anywhere near this Indian restaurant I suggest you get yourself down there ASAP.  Try a little experiment, go with a friend and order differently, I bet you end up squabbling over who ordered what as you share.  We didn’t have anything we wouldn’t have again and we tried a lot (all to provide you dear reader with the best possible information). 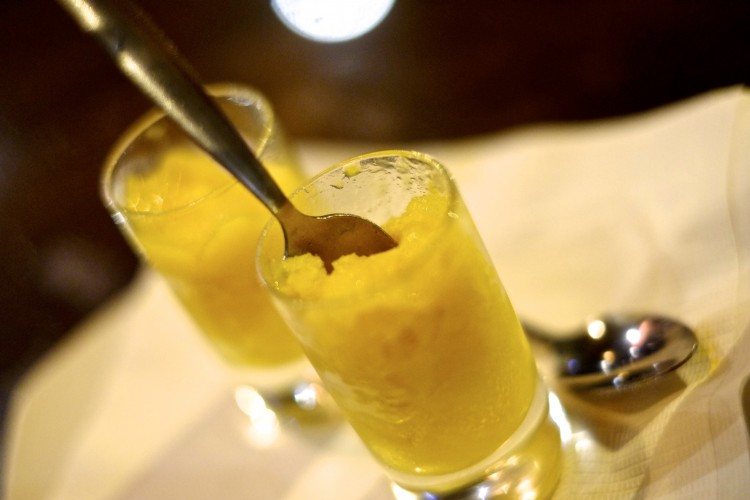 Incidentlly when we arrived the charming lady on reception noted that she had the same car as us (we parked next to hers outside the restaurant).  We talked briefly about how we both enjoyed owning one.  I noticed she was revising under the counter I thought this a bit strange that that was permitted but nevermind she was charming after all.  Later when we had settled in she popped over to see if we were happy with everything and mentioned that her father owned the restaurant, which had been initially named after her and her brother.  The revamp and name change didn’t seem to bother her at all.  As they say ‘what’s in a name per se?’ 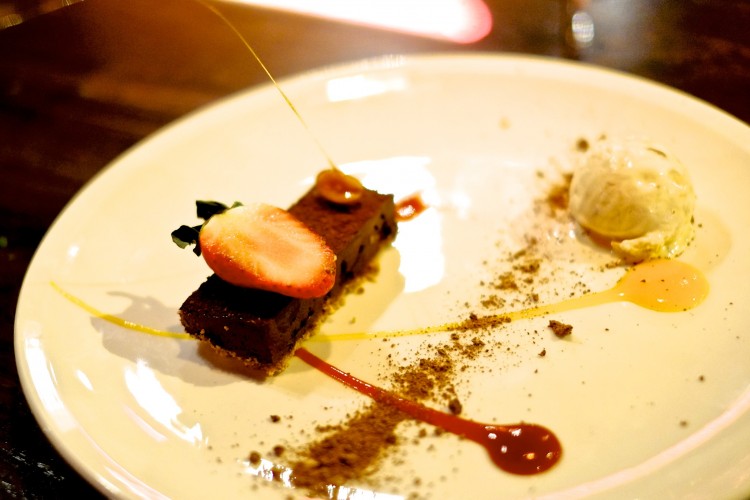 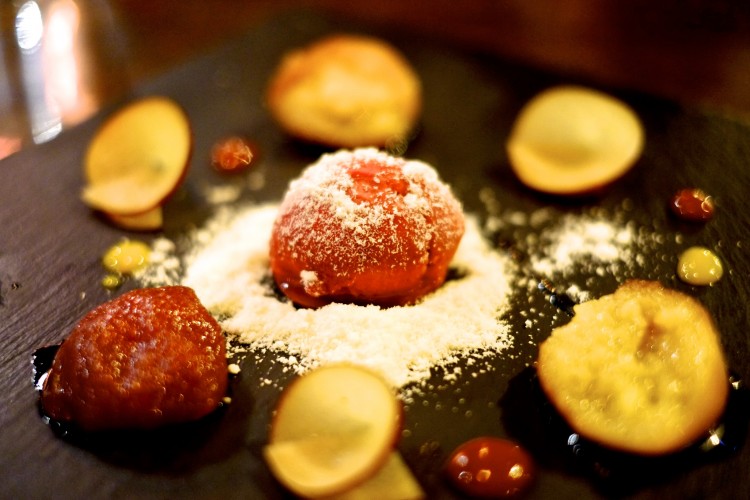