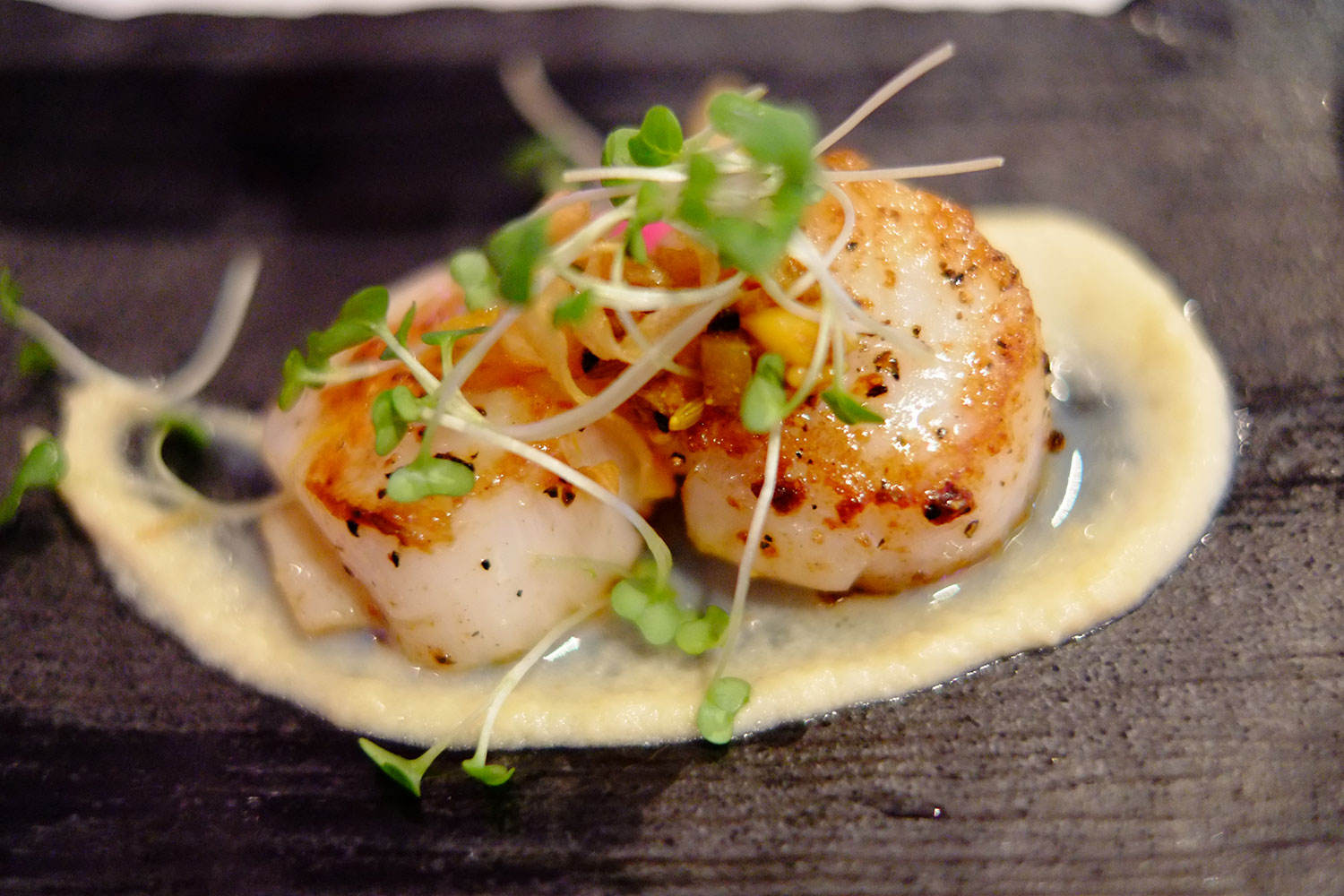 Petts Wood is one of those places that grew rapidly after a train station was built.  Quite a gamble in its day, but a hundred years ago it expanded nicely into one of London’s more desirable suburbs.  Time seems to have stood still for it has a square, independent shops and quite a few restaurants.  In its time it also seems to have had a lure for comedians and writers, Jack Dee and David Nobbs have resided here amongst others.  I can hear Reggie Perrin walking to the station muttering about square hoops and bottomless ashtrays.  It was to taste the cooking of Atul Kochhar that we had trekked this far.  Indian Essence is an outpost of his Michelin starred Benares restaurant in Mayfair.  It often pays to take a gamble on location and here is no exception.

Jitindar Singh runs the restaurant and a steadier hand you couldn’t ask for, he walks the floor with a nod here and a gesture there and his staff silently and discretely carry out these unsaid tasks.  In short he’s a pleasure to watch and it was a delight to be looked after so well. 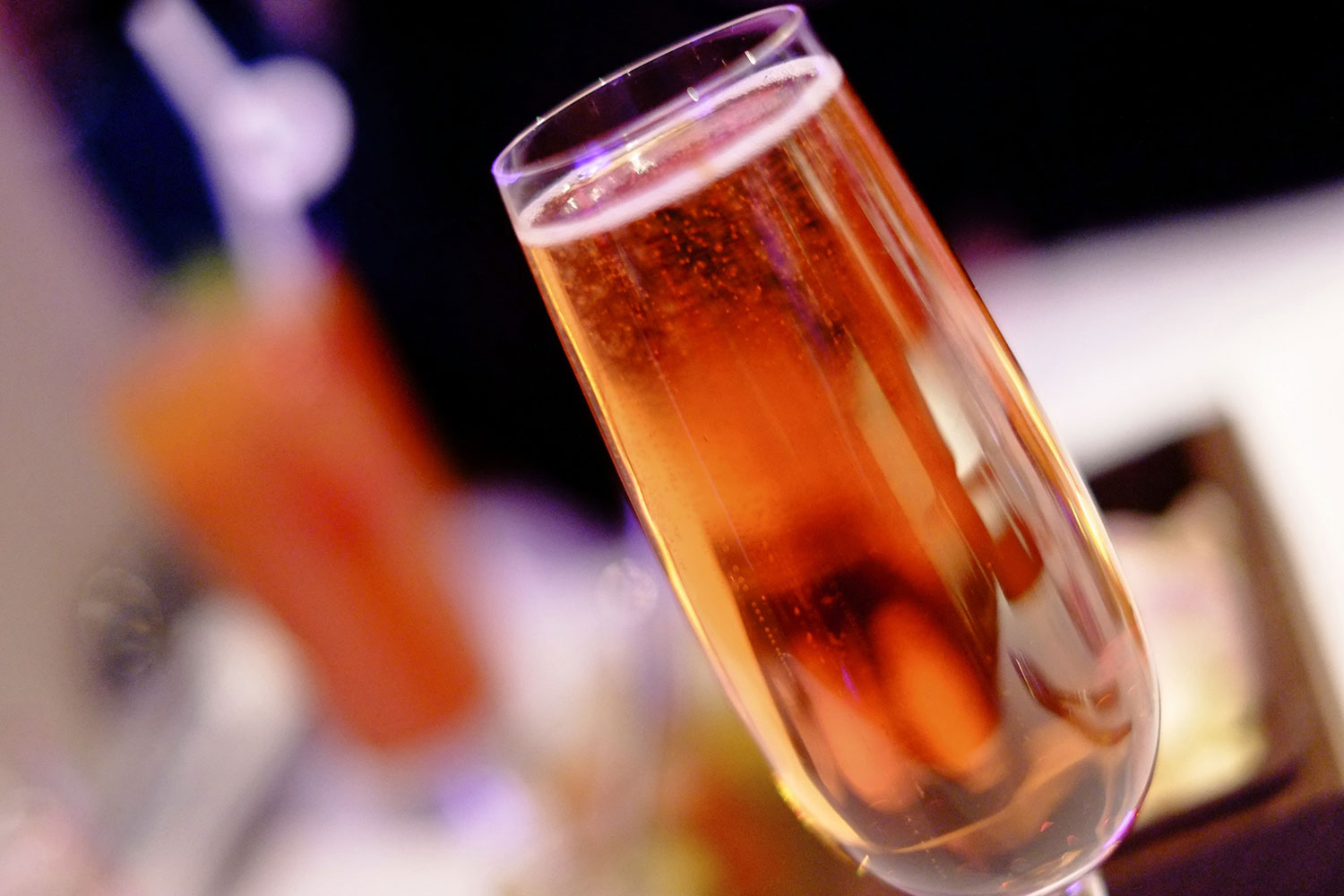 We arrived mid-week on a very cold night and it was nearly full in no time.  Poppadoms with a little tray of three chutneys gave us something to nibble on whilst we looked at the menu and drank a couple of good pokey cocktails.  It’s a buzzy place with lots of families and groups chatting away, nothing too inhibiting. 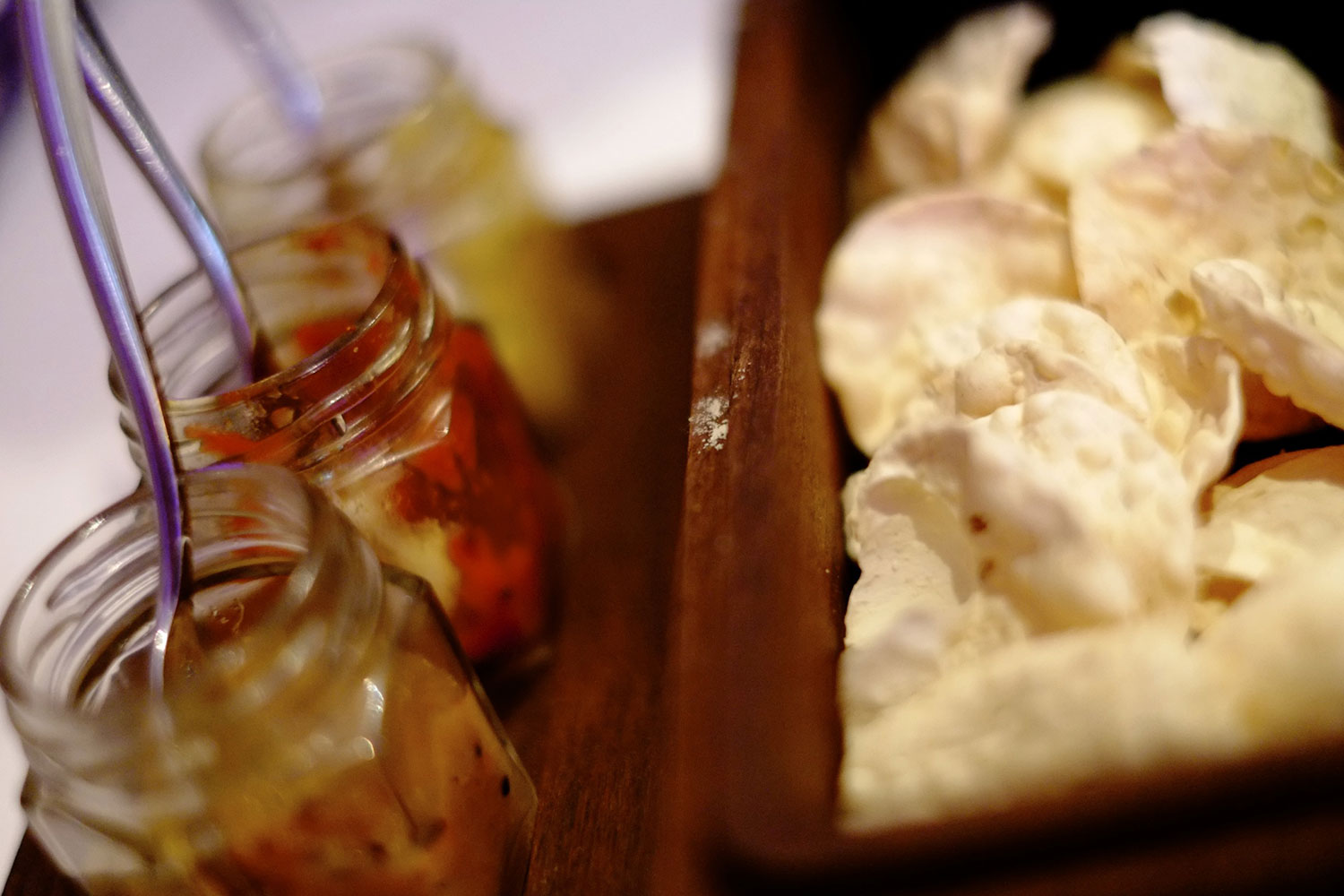 The tasting menu seemed the only way to go, there were many other options but it is the best way to cover ground it terms of finding out what the kitchen can really do.  Normally one could expect a good balanced series of dishes and generally this was true.  Here the cost of the tasting menu is recession bustingly good,  £37.50 for six courses with petit fours thrown in at the end, or if like me you enjoy a considered glass with each plate then £65 is what you pay.  Unbelievable value for money and let me warn you the portions are generous as well.  Pan seared scallops with little shavings of parsnip and pickle were sweet and juicy.  It had a lovely dressing on the side that was coriander with something acidic, very enjoyable.  Next came something I was a little trepidatious about, karara kekda aur aloo tikka or crispy fried soft shell crab with cumin scented potato cakes.  My concerns lay with the crab as did M’s.  We were assured that you eat the whole thing, claws, shell, everything!  We did.  The taste was mild and not too frightening at all, it was comforting to know that the crispiness came from deep-frying and not the shell.  The potato cakes were spicy and quite delicious, a touch too hot for M but gallantly I stepped in to help her out. 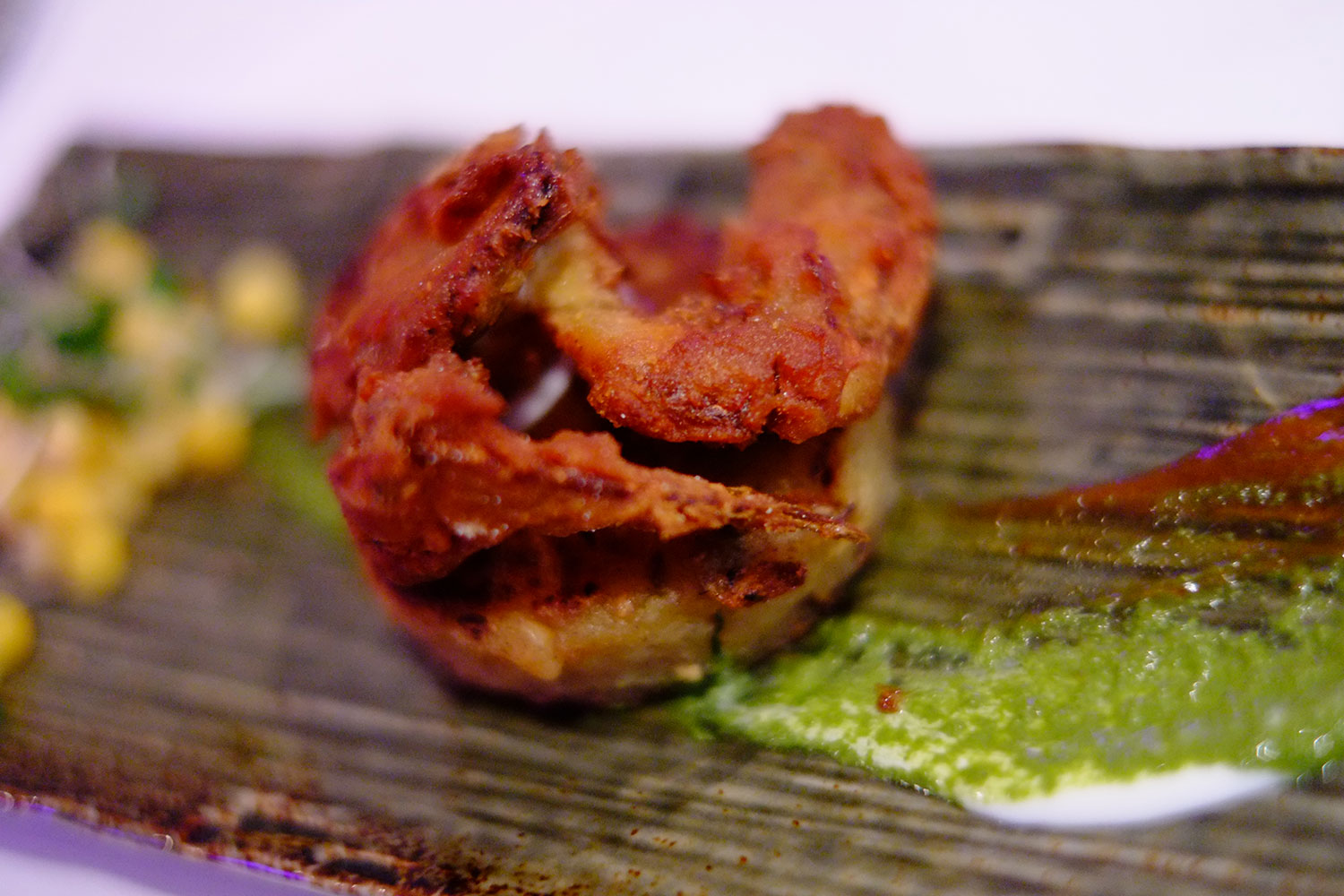 Creativity is strong on the menu, I saw all sorts of wonders passing by but you can’t eat or have everything.  The kitchen is on view, which is quite a popular feature in restaurants these days but what they have here is glass separating the noise from the customers.  Great idea that I hope catches on. 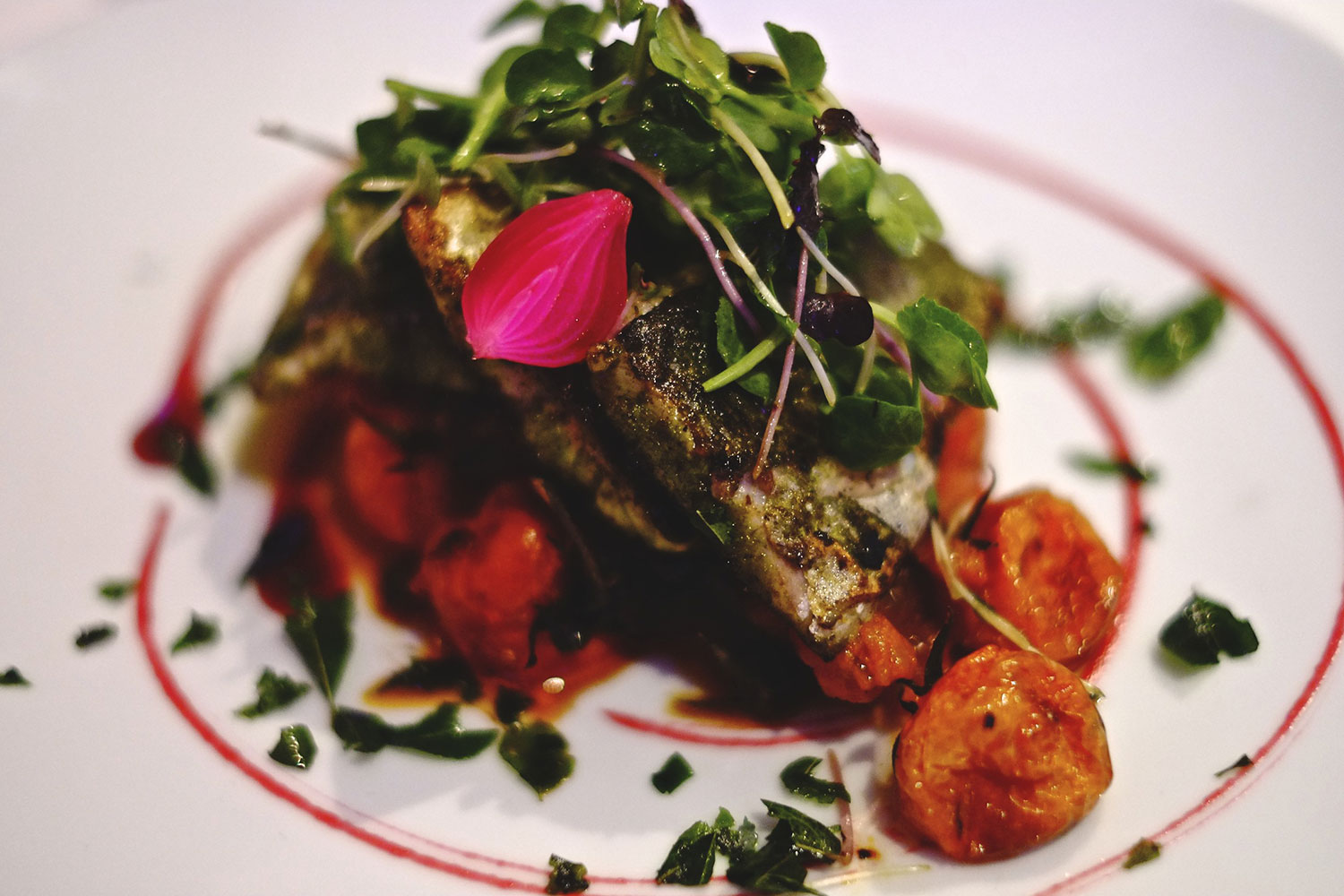 As I had chosen the ‘with wines’ option it’s worth mentioning that these were faultless and a little brave at times, a strong red with fish?  Well yes, the tandoori grilled salmon, prawn and chicken could take it and something lighter and white would have been lost.  Our sommelier was superb, guiding me through each choice in a relaxed and knowledgeable way.  Incidentally he was as keen to know what I thought as he was to explain it, we ended up having a discussion about the merits of a New Zealand Otago Pinot Noir against an Argentinean Malbec with lamb.  The Malbec won over with the lamb biryani, which had been sealed with pastry to keep the lid in place letting nothing good out.  John Dory sitting on roasted tomatoes was M’s favourite, I was beginning to flag so her hollow legs kicked in and she helped me out.  I could have done with a bit more light and shade with the courses, a touch of something simple in the middle would have helped me out but to be fair there was a refreshing liquid lemon sorbet to mark half time. 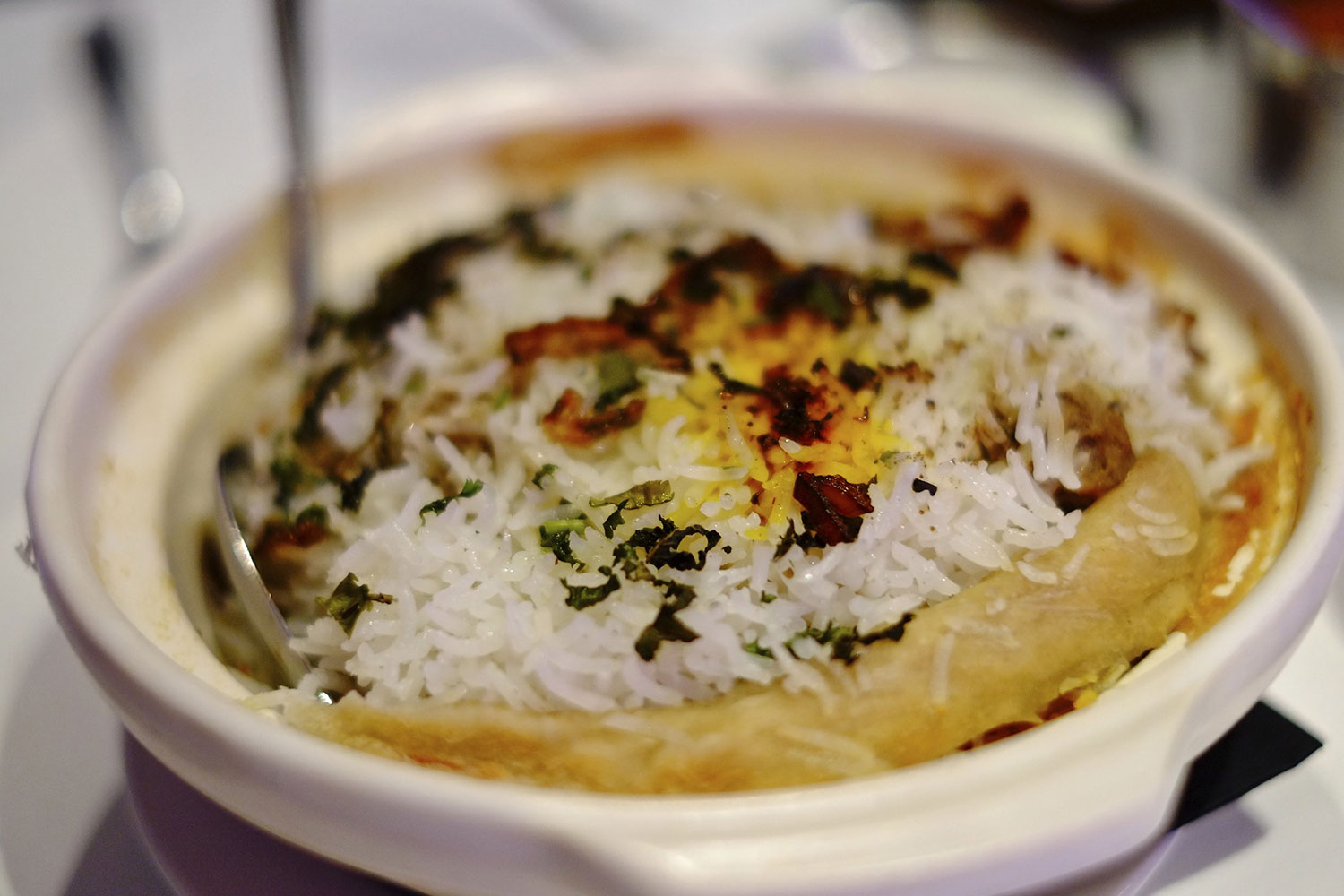 There were other little side dishes that worked wonders with our taste buds.  A grand finale of gulabi bhapa doi aur chaklet, a rose scented baked Indian cheesecake and chocolate fondant sitting in its own personal lido of chocolate sauce arrived.  This was good at every level and peeking out of the top were some micro basil leaves.  These parried well with the sweet sauce and finished it off nicely. 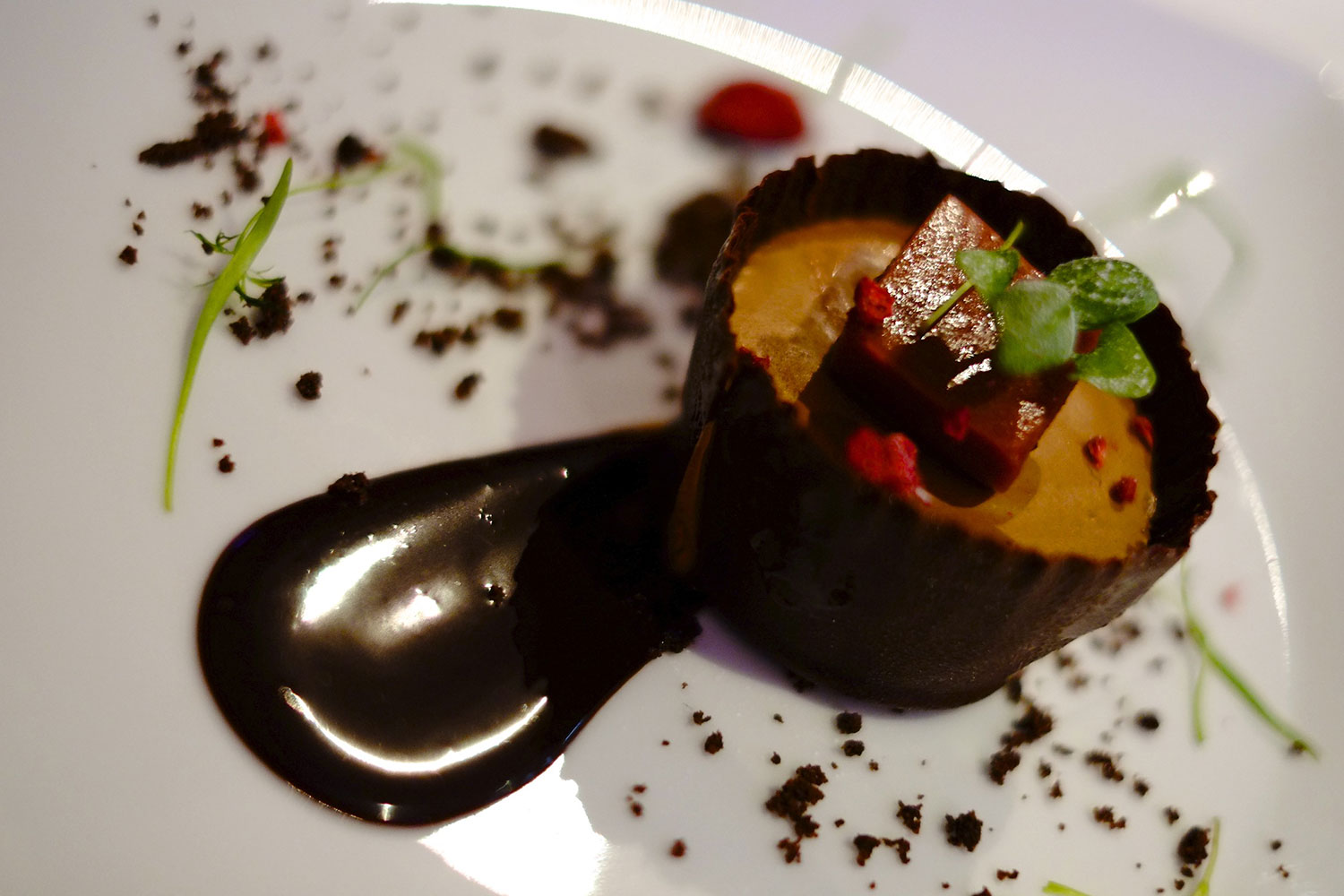 Indian Essence is an excellent exponent of what has happened to Asian cuisine in recent years.  Thoughtful, imaginative and competently cooked and presented this is a destination restaurant.  Maybe I was just being too greedy and should have kept to just three or four courses.  But where’s the fun in that?  I’m afraid that wherever there is a tasting menu I’ll always have it.  It is the calling card of any innovative chef and as Jack Dee once said “ignore creativity at your peril”, I’d say ignore Reggie Perrin’s ‘Sunshine Desserts’ and go for Indian Essence instead.