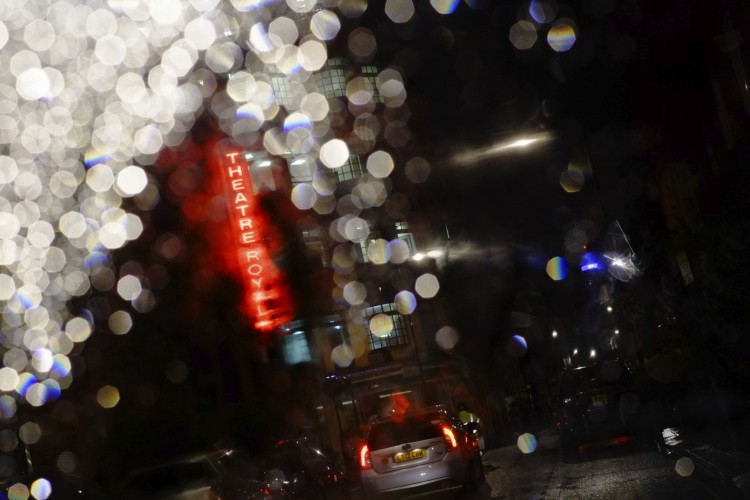 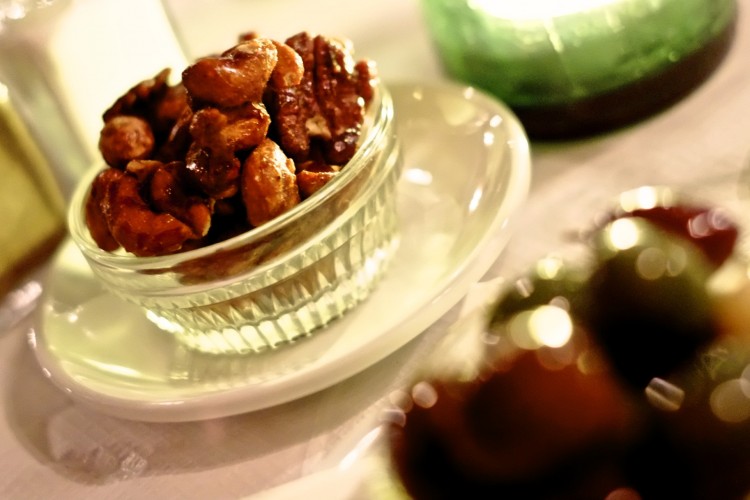 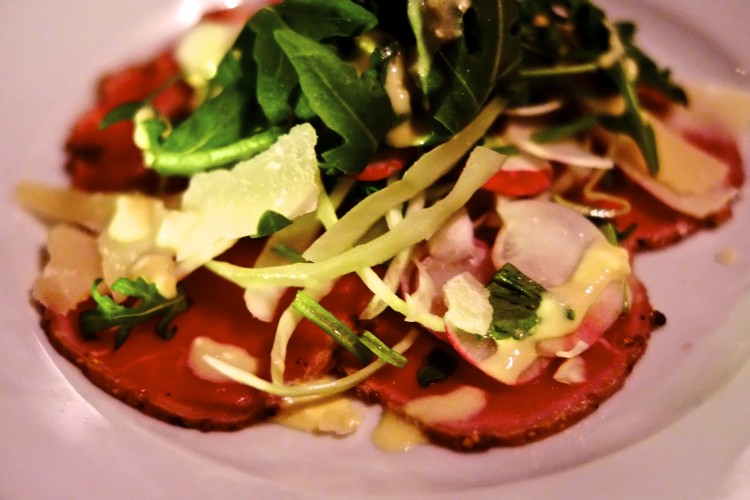 Like the opening scene from a movie we arrived in Soho looking for shelter from the pouring rain and made our way to 13 Exeter Street, with the reflections of neon light dancing on the pavement, we covered our heads from the heavenly onslaught.  Joe Allen’s is a great bolt hole for a rainy night, half submerged you feel cosseted and safe inside watching the shadow legs passing by the stormy window. 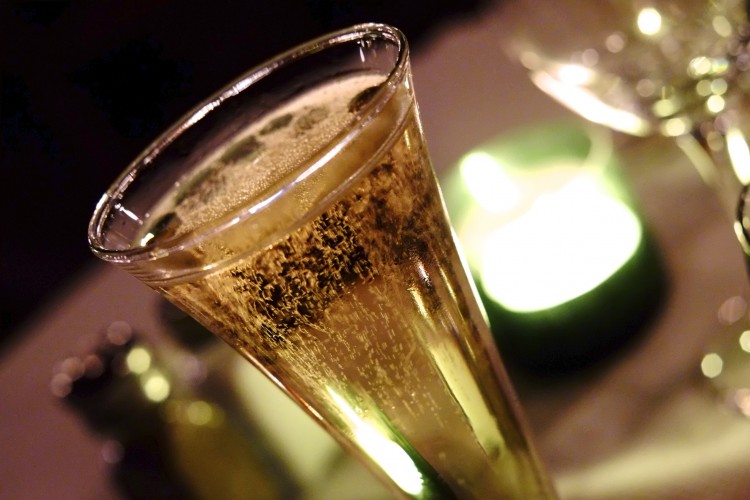 Joe Allen is a Covent Garden institution it has been around for 37 years so has some claim to that honour.  The food is unashamedly American brasserie.  You will find all your favourites and more on the large menu.  It has been, since its inception a hang out for the theatre land crowd.  The waiters are more likely than not aspiring actors.  Directors and producers have been making it their regular haunt for years.  The bare brick walls testify this, dripping with posters, flyers and memorabilia.  It’s an instantly welcoming place to be with a great staff that can second guess your every thought. 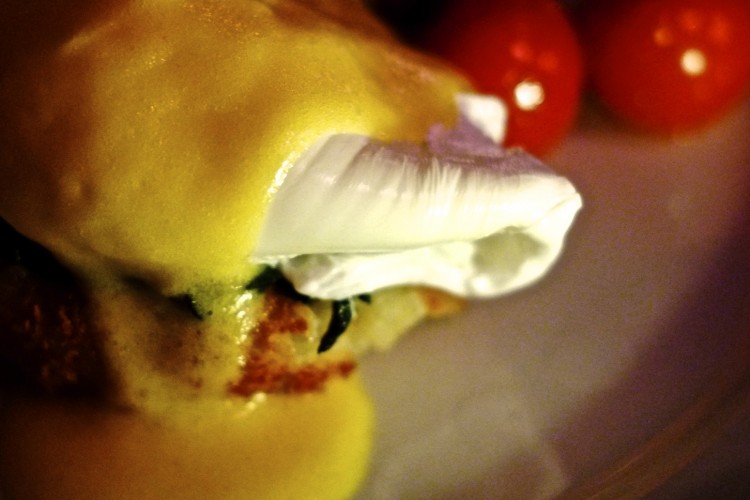 After a little drink of something fizzy (they thought of that for me) we started with some olives and incredibly moreish spiced bar nuts.  They were sticky and sweet and lasted about thirty seconds.  M’s seared beef carpaccio with a horseradish cream was extremely tender.  Visually it had a salad on top hiding its natural beauty but was worth the forage.  I was in a playful mood so decided on what really should have been a brunch order; eggs Joe Allen.  This was just what I wanted, potato, spinach, grilled tomatoes with a perfect poached egg and hollandaise – a perfect execution of a classic dish.  Both these starters are available in large or small sizes. 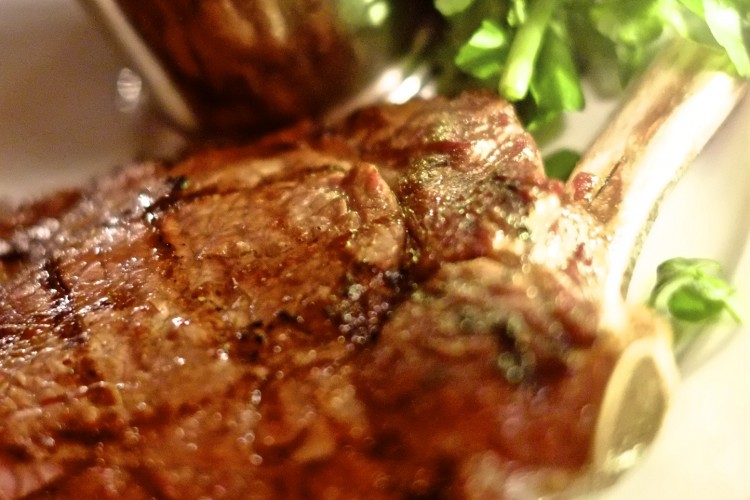 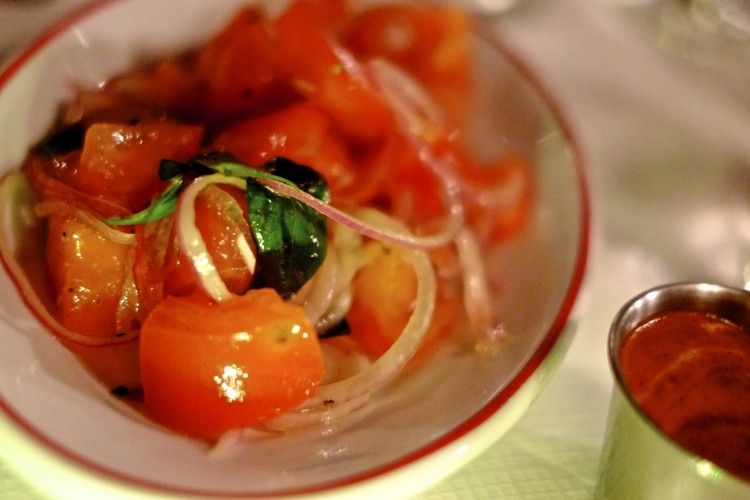 This rainy Friday night saw the restaurant filling up with a mixture of West End hopefuls and non-aspiring regulars happy for the boards being trod by others.  I noticed the staff put everybody at their ease with a smile, taking their wet coats and welcoming everybody like a long lost relative.  This simple behaviour is surprisingly absent in many restaurants. 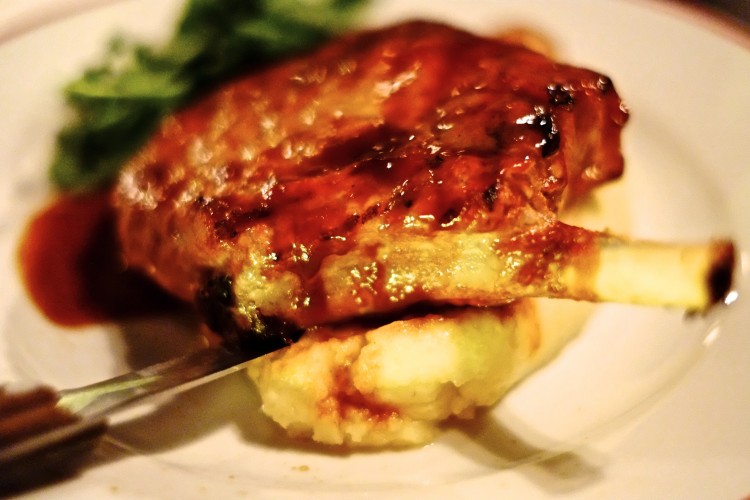 The mains played to the strengths of American cooking.  My rib eye on the bone had a fantastic taste and texture.  Greedily I chose several sauces, the chipotle hollandaise and an avocado, lime and coriander salsa were my favourites.  It’s worth mentioning one of the sides; beef tomato, basil and onion salad, this was a perfect acidic match to the steak and sides, cutting through the sauces and giving the whole dish a special zing.  M went with a recommendation of spiced maple glazed pork loin chop with roasted apple.  This was gigantic and crucially perfectly cooked.  So often with a large piece of pork you get a hard overdone lump of meat, not here, this was spot on and well worth having.  M ate it all despite her diminutive size. 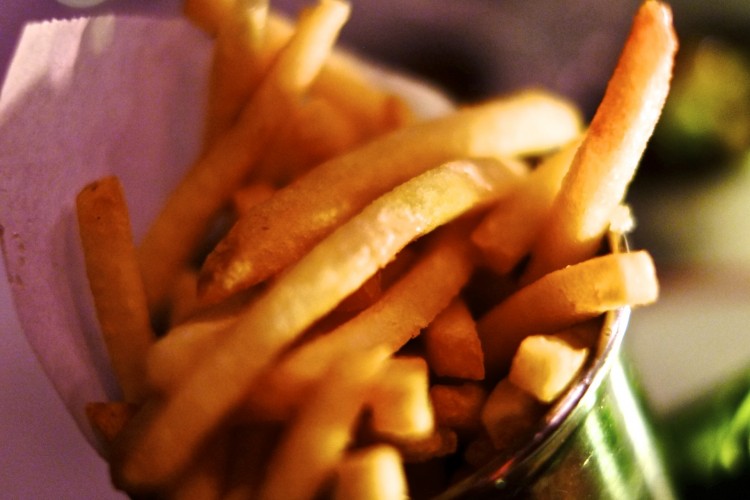 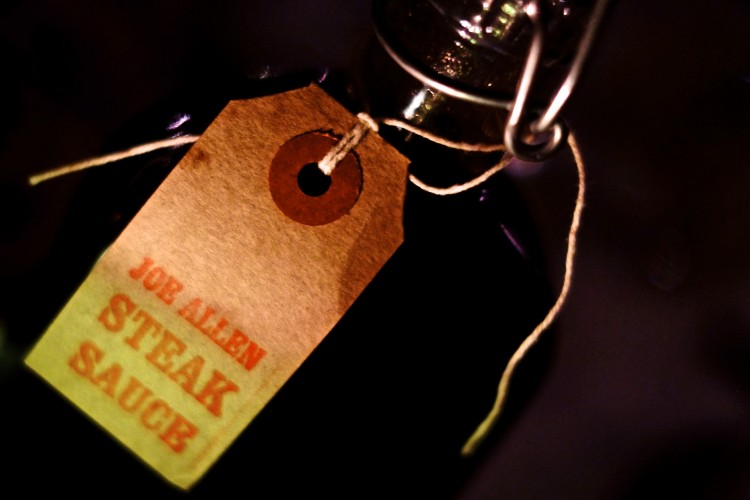 Dora had served us thus far, as she handed over the dessert menus I was convinced it had been done in that RADA way.  That casual but very careful delivery, those in know can always spot.  There was a method in her ‘method’. 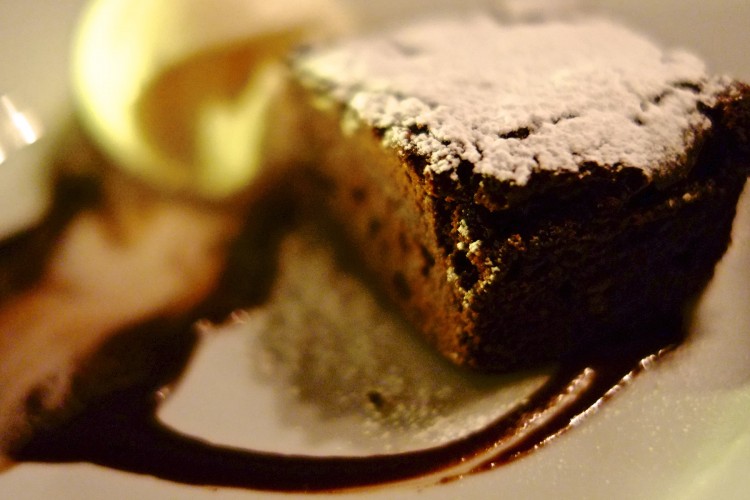 Amazingly we still had room for more so elected three desserts to sample.  M straight away went for a chocolate brownie with vanilla ice cream.  This was good and wholesome, satisfying the parts other brownies would struggle to find.  A shared cheesecake with blueberry and Vin Santo compote was creamy and desirable.  It tasted great.  The only slight hick up was strawberry jelly with roast peanut ice cream. 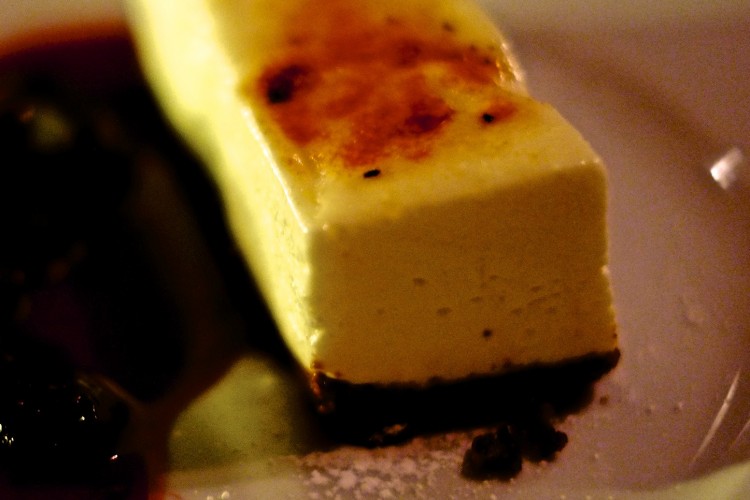 The jelly didn’t work for me, it was opaque and dense – no wobble, but the ice cream that tried to dance with it had a genuine roast peanut flavour and I loved it. 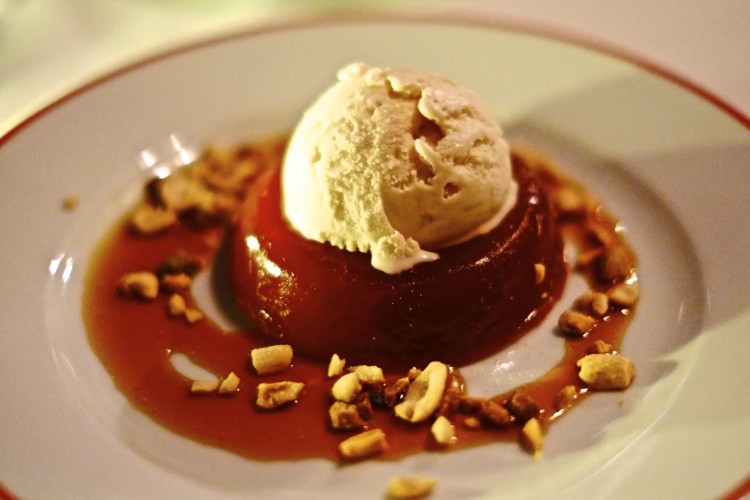 This was washed down with M’s usual fresh mint tea and I dared to step into the 1950’s and went for a Brandy Alexander.  It was like a cold alcoholic hot chocolate.  This was a first for me and I can recommend it.  In fact I think there should be a move towards dessert cocktails in restaurants, you don’t see them enough, we don’t always want coffee or tea and port has a limited palette. 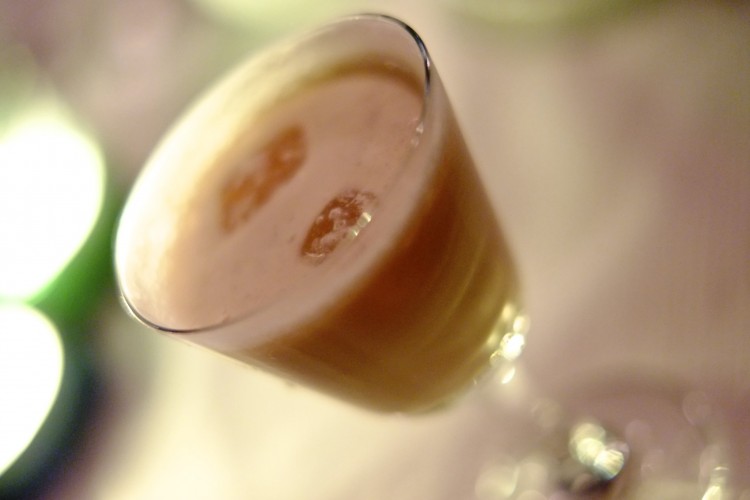 Two hour after our submersion in Americana with the West End twist of theatre land thrown in I was fully expecting to be confronted with the Jets or the Sharks outside.  We weren’t of course but the rain had eased and the puddles cast their own version of West Side Story, Leonard Bernstein’s America was racing through my head but the body was unable to follow the energetic choreography of Jerome Robbins, after a meal like that not many could. 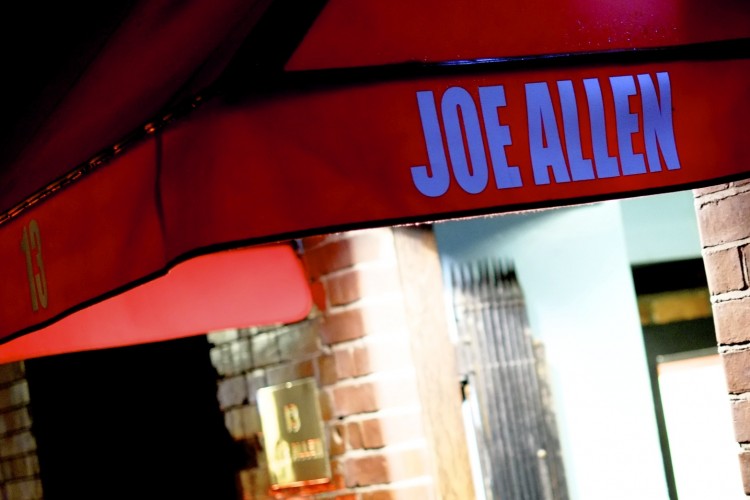