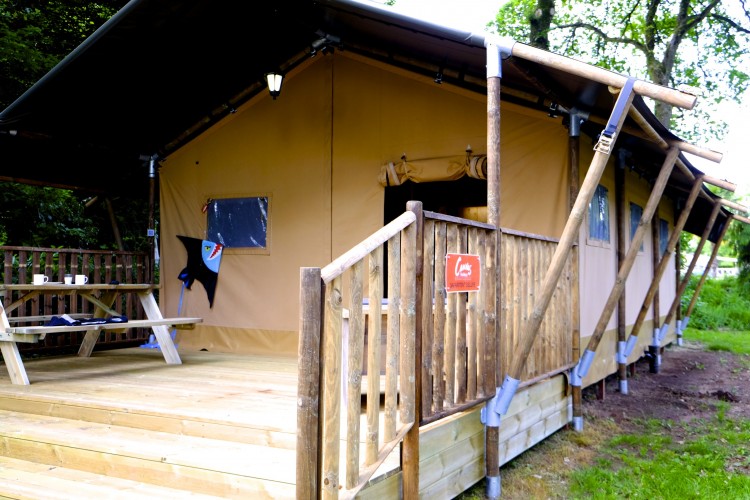 Getting through the channel tunnel is as easy as pie, you check in without leaving your car (they have a highly sophisticated system that reads your number plate). You drive onto the train, which is a bit weird at first but it makes sense. You then wind down your window, wait for the train to start and in a little over half an hour you pop up into the sunlight in France. 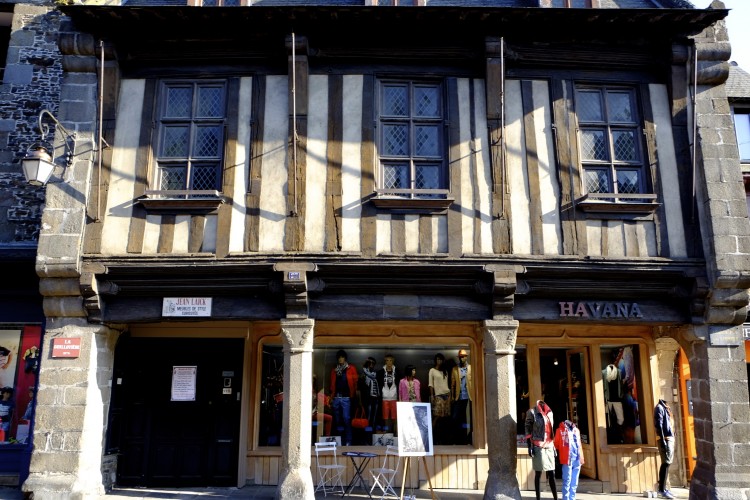 Getting M to go camping was quite a bit harder. She is a dyed in the wool ‘camping phobe’. The last time she was in a tent was as a Brownie way back in the distant past. When the idea was mooted all I heard were one or two horror stories based on fuddled memories of over 30 years ago. She would say things like “Well it’s alright for the boys but you won’t catch me doing it, you can go if you want but I’m definitely not sleeping in a tent” And so it went on. I booked it anyway but what I hadn’t told her was that this was camping with a difference. This was luxury camping. 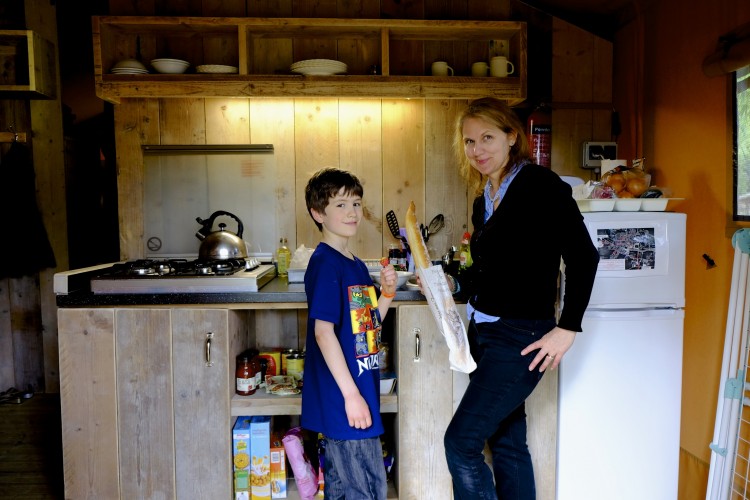 Some people call it ‘glamping’ but Canvas Holidays who organised the trip for us have developed a half way house in the form of luxury Safari Tents sited in Brittany, northern France. As soon as M found out that our tent was to have a shower, toilet and kitchen and the biggest pull of all, real beds she was sold. Well at least I knew she was sold even though at this stage I was still hearing “Well it might be alright I suppose, but are there any hotels near by in case I don’t like it?” 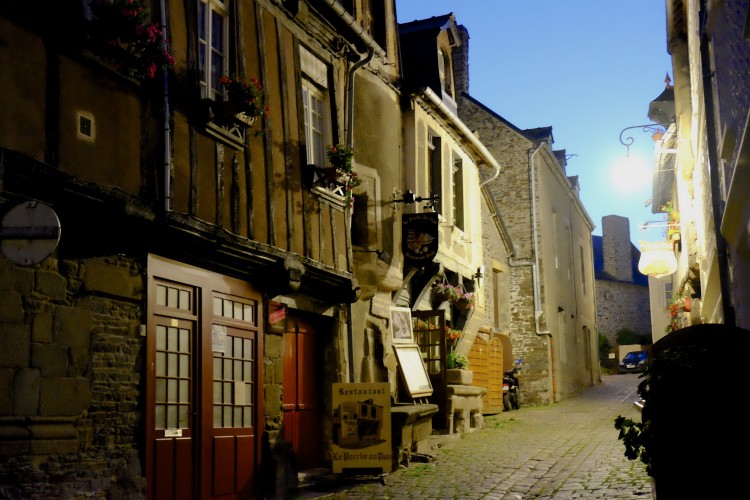 This of course was not necessary as it turned out to be nothing short of brilliant. Our journey started early morning and a short drive down to Folkstone to catch the train. Out the other end and the serious driving begins. Driving on a French road is something I’d forgotten about. It’s fast, they like to drive fast, that’s all you need to know. We went at our own pace and were at our campsite Domaine des Ormes within a few hours. 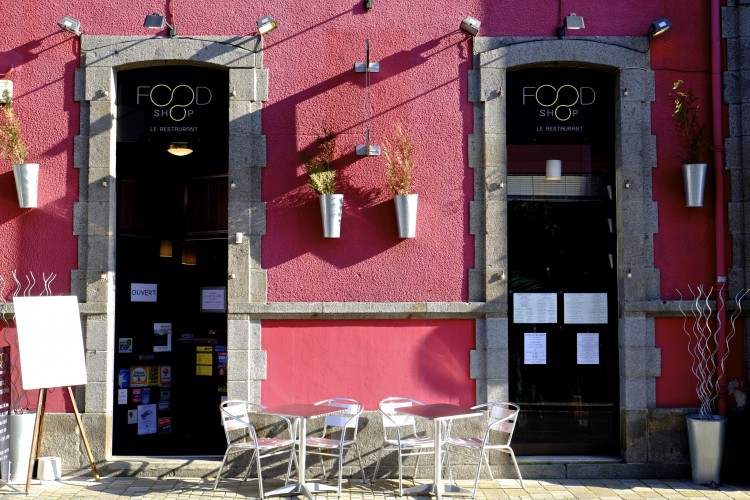 The beautiful countryside is a million miles away from the Kentish vistas we are used to. Our 15 year old was quite taken with the views and kept on asking how easy is it to live here. Easy we replied all you need is a job and to speak French. That kept him quiet for a while (he’s doing Spanish at school having dropped French a year ago). 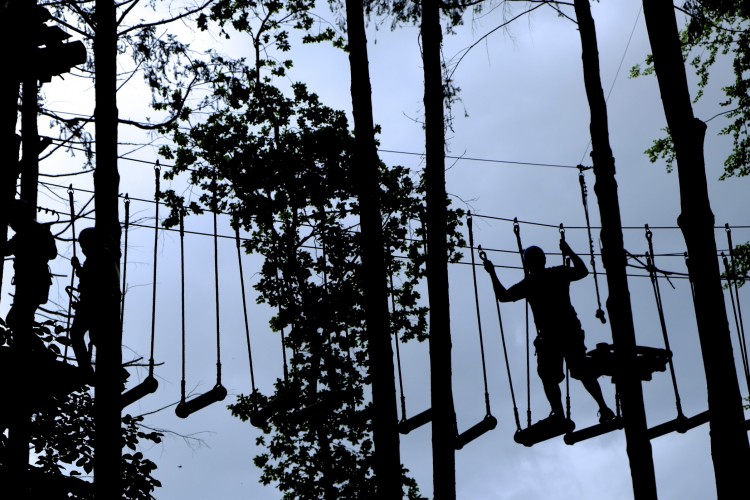 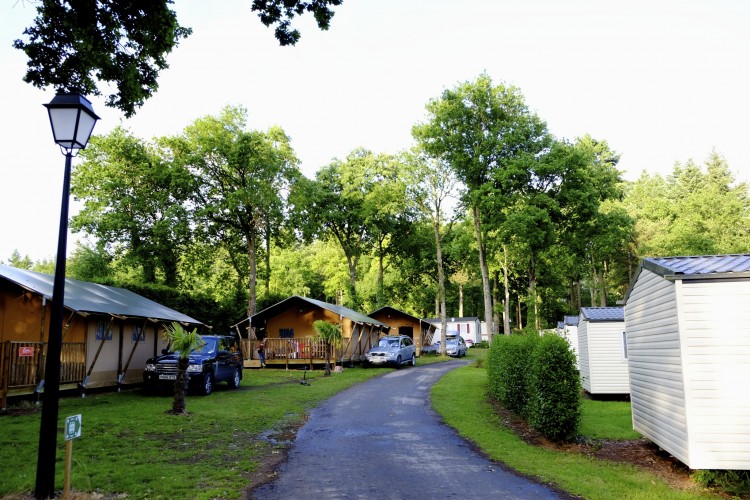 Checking in is a simple process that involves you having a wristband attached (a bit like going to a festival) and a key fob that lets you back onto the site. Then we were taken to our tent by Janine she was on her bike with us following slowly behind. There are a lot of cyclists in the camp as you can hire bikes by the day or week so driving slowly is a must. 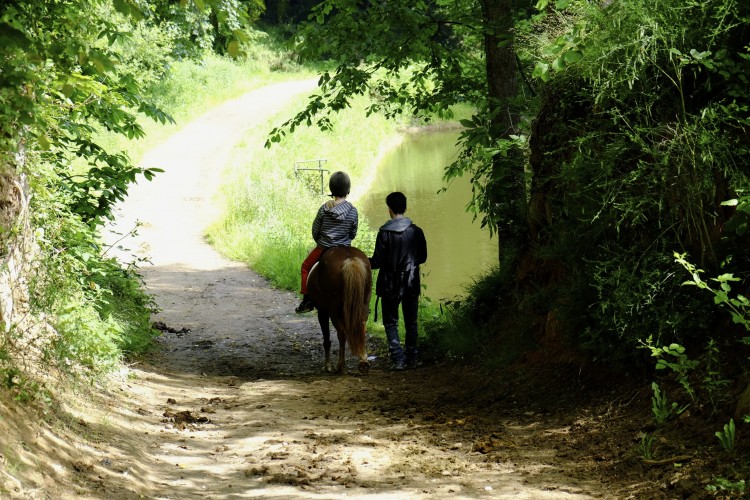 The tent was impressive to say the least. It had wooden floors throughout, a good-sized cooking area with a four-ring hob, fridge and worktop area. There was a large table to eat from and two bedrooms divided by curtains. Our bedroom had a fabulous four-poster bed with a mosquito net on it. I don’t think there are any mosquitoes around in late May but it looked very ‘safari’. The kids room had two bunk beds so you could sleep four. Then there was the ‘deal breaker’ for M, the bathroom. This was better than many B & B’s I’ve stayed in. Wooden floor, large shower with hot and cold water and a stylish hand basin on a wooden stand, and it was roomy enough to swing a cat or two. 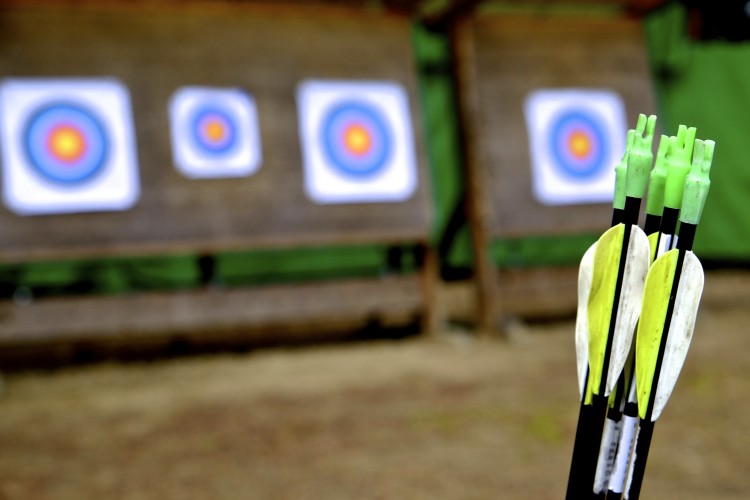 We had totally lucked out “This isn’t camping” said out 15 year old “There are beds for a start and it’s got a wooden floor” “Yes” we replied in unison “Isn’t it brilliant”. If M’s happy then I’m happy, so our five days in the ‘jungles’ ofBrittany began. 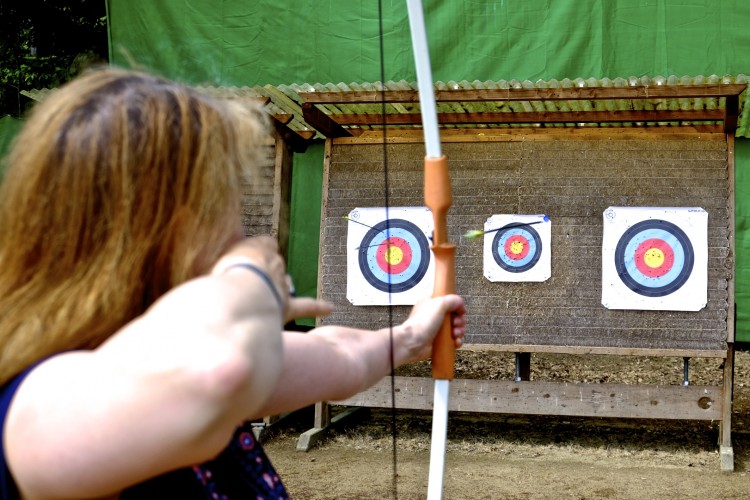 There really was so much to do we didn’t manage half of it. One of things that both children wanted to do was have a go at the climbing wall. Towering some 30ft it looked completely impregnable to me but after being strapped in by a qualified instructor and the application of climbing helmets they were up that wall like a pair of ferrets. They loved it and had some sound instruction along the way, even X who is used to them said it was “Really good because we were guided through each section and given encouragement”. A who was in his last week of being eight showed no fear at all and made it to the top several times. 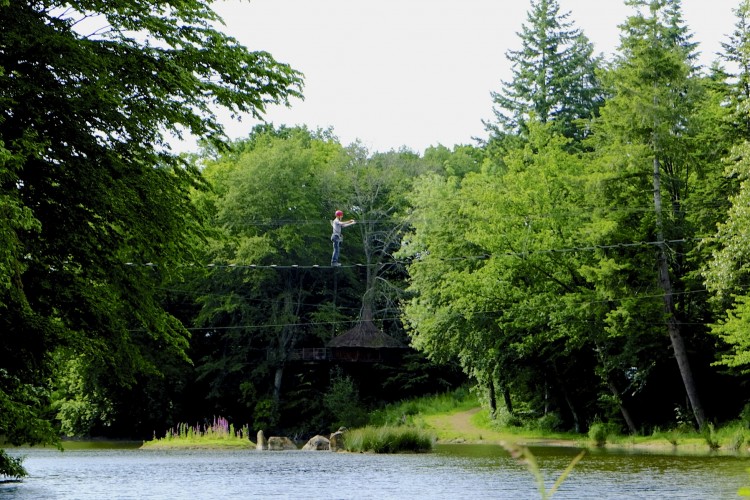 Cooking was very easy in the tent as the facilities while not quite home are very easy to get to grips with. If you don’t fancy cooking you can always eat at the onsite Pizza Restaurant or the French Bistro if you’d like something a little more substantial. They even have a creperie that you can visit for a quick chocolaty sugary hit. 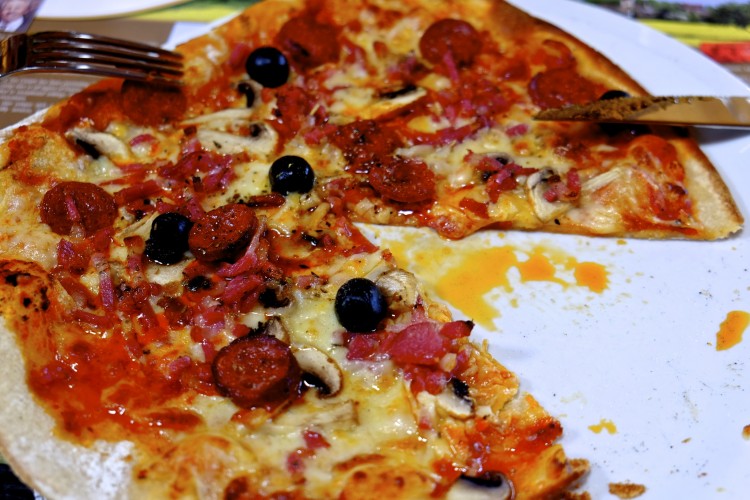 The boys both hired bikes, in fact A learned to ride properly while we were there. Being townies we hadn’t concentrated much on that aspect of his development as we walk most places or drive longer distances. He has been a fiend on his two wheeled scooter for years so it was no surprise that he rode a bike in a few minutes and after a couple of hours and only one or two bruises was a complete cyclist. Proud mum and dad and a beaming A made for a wonderful day. 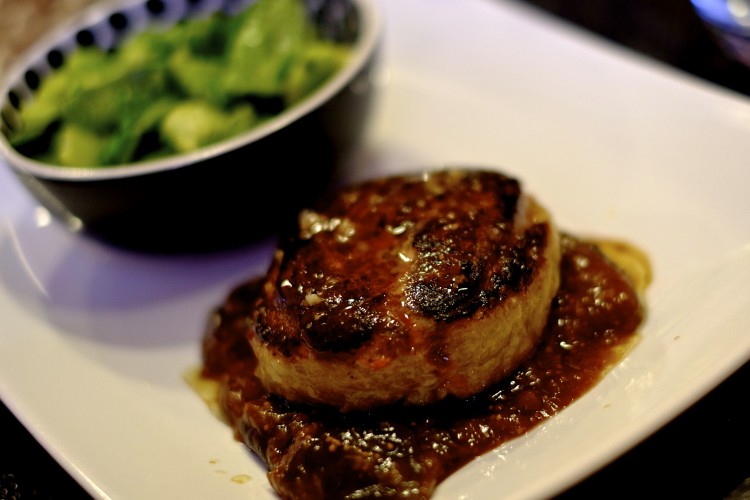 Other challenges proved a little harder but by no means any less enjoyable. The tree walks (walks is a loose term here) are available for three different heights of children (or adults). X went on the ‘grown up’ one and loved it. Climbing from tree to tree with the aid of wires to stop you falling, zip wire and a planked bridge over a lake were some the obstacles to overcome. A’s course was not as high up and physically less demanding but great fun all the same. A did it twice he liked it so much.

There is a lot to do in the surrounding area as well as on site. We had an evening meal in Dol-de-Bretagne to celebrate my birthday. A modern take on the bistro, which had great food and in funky surroundings. The town itself is medieval and full of history as well as some enticing shops. What is it about wishing to be local? We found ourselves in a shop specialising in Breton wear and before you knew it we all emerged with something stripy. 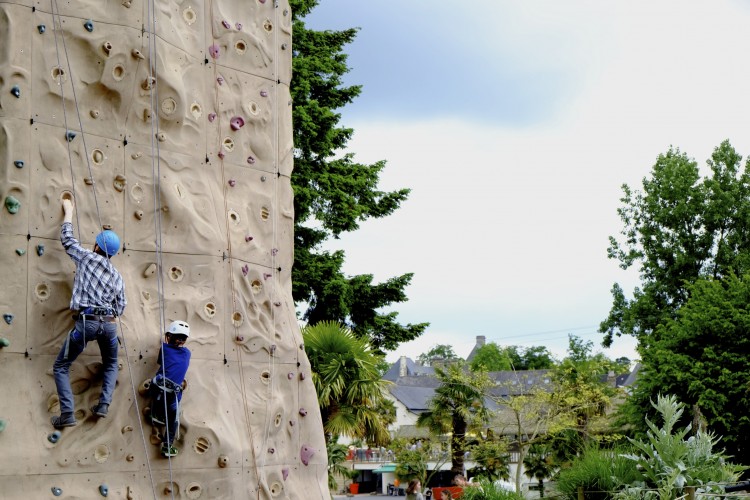 Closer to home there was a dare on the table. The boys kept on asking what mum and I would do in the way of activities. Tricky, we didn’t want to do anything really except just lounge around in our lovely tent. But the boys weren’t having any of it (secretly it gave us an excuse to have a bit of fun without looking stupid). 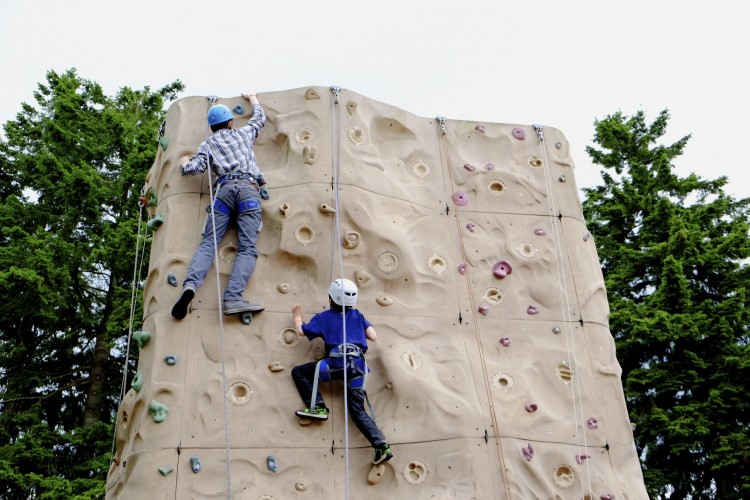 Archery was chosen for its even playing field of ability. We had a superb instructor who would casually say “No not like that, hold it like this” and wham a Bull’s Eye without even looking. M scored the first Bull’s Eye we were all a bit envious then A then X and finally me. I can tell that we all enjoyed it enormously but it is harder than it looks, well that’s my excuse anyway. 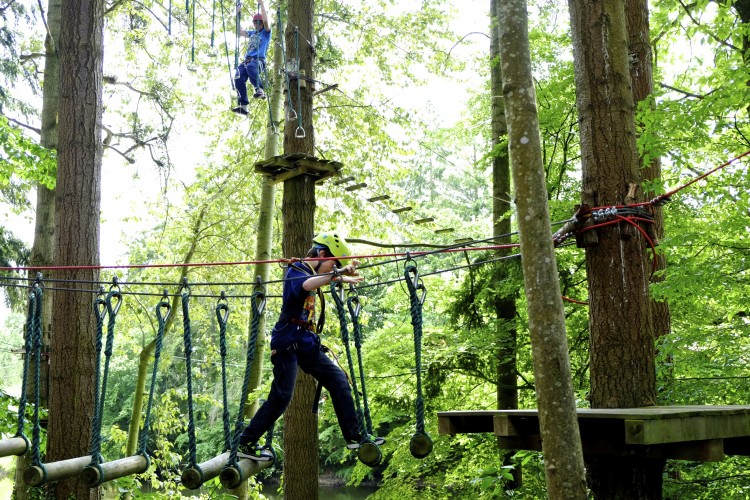 There was one thing that A was quite keen to do but was a bit nervous about. We held firm not because we are cruel but because we knew he’d regret it if he didn’t give it a go. So it was on our last full day A had his first ride on a pony. He didn’t fall off, the pony was delightful and we all walked with him through the woods and around the site for half an hour. He loved it. There are many things to do here for all the family some new and some old. The place is so safe that you really can let your children have a slice of what you had in childhood, out all day playing around, making new mates, cycling, swimming whatever it may be your kids are bound to have a good time. 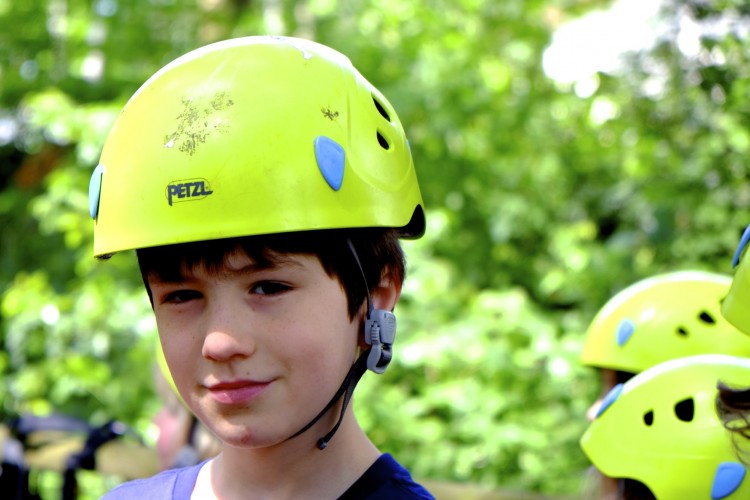 Before we left there was one last activity I’d been itching to try but was frankly too afraid to do it on my own, a giant zip wire. So as all parents do in times of trouble I asked A if he’d like to go on the zip wire he replied “Well dad it looks really high up, I’ll do it if you come with me” Bingo my wish was granted. Little did I know what I was letting myself in for. 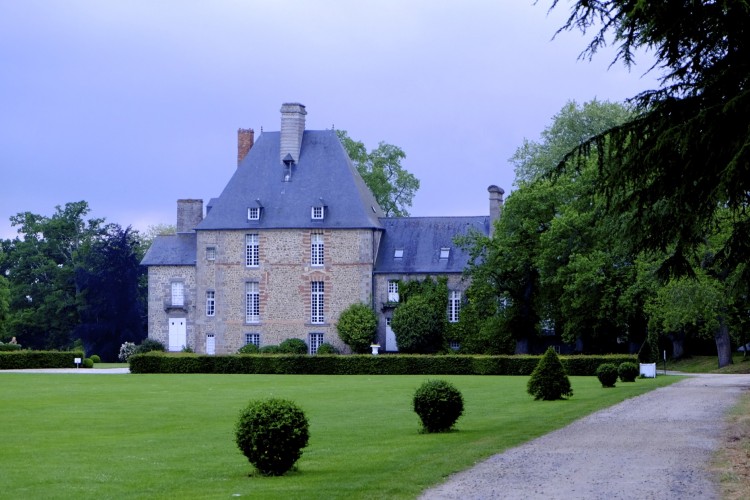 We climbed up into the tree house that you ‘launch’ from, it was raining lightly and the ground was a bit wet. Strapped in and told what to do (you run into the mound of bark as you get to the end, you shouldn’t fall over) we zipped off, A looked elegant and smooth as he flew (faster than me) down the wire and performed a perfect landing. I on the other hand tried to face the front but kept on slipping round. The consequence of this was hitting the ground came as a bit of shock to me. I landed butt first in wet bark that managed to push itself up my t-shirt as far as my neck and into my trousers. To say I lacked dignity would be an understatement, A was laughing his head off so was M who had filmed the whole sorry episode. 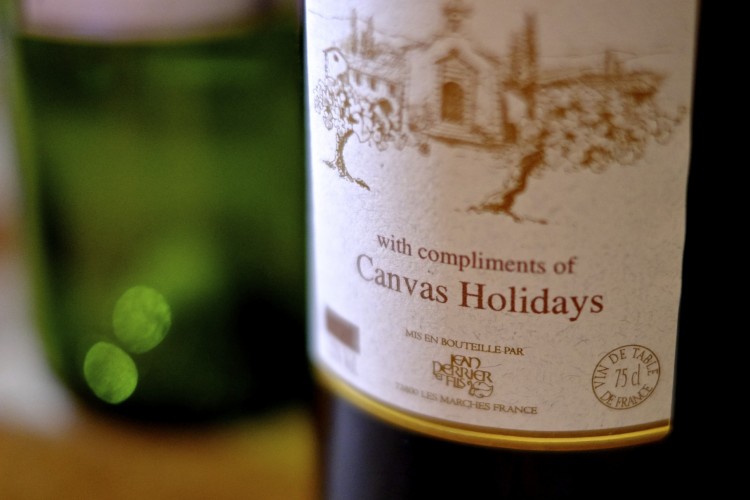 We left the next day wishing we could have stayed longer, it really was good fun, even M the world’s worst camper loved it. She said she’d do it again no problem. My only concern was to land with a shred of dignity, I guess I’ll have to give it another go another year when nobody is filming me. 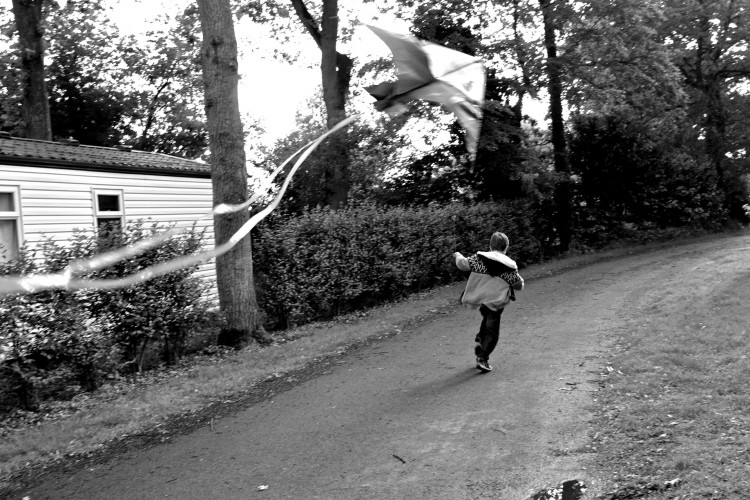 Four nights at Camping Domaine des Ormes, Dol de Bretagne, costs from £741based on staying in a Safari Tent Deluxe (sleeps six) on a self-catering basis and arriving onsite by 15 August 2014.

Canvas Holidays will be celebrating its 50th anniversary in 2015 and has an illustrious history of offering high quality camping holidays at over 90 handpicked sites for camping across ten European countries including France, Spain, Holland and Germany. Canvas Holidays provides self-catering accommodation to suit all budgets, offering flexibility on dates, duration and travel arrangements.

For more information on Canvas Holidays or to book, visit