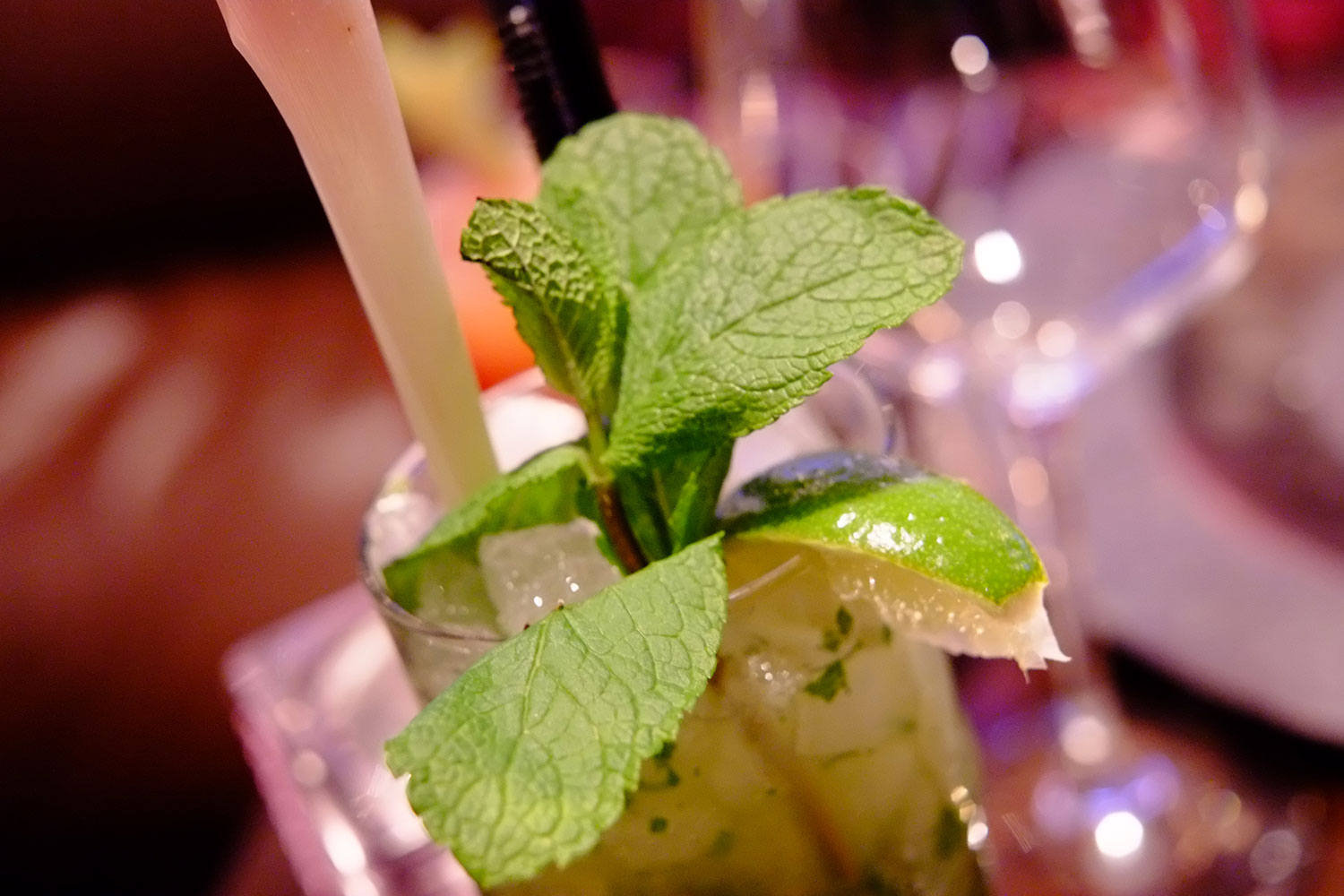 This place is buzzing.  As we walked in at 8pm on a Saturday it was packed and full of diners having a great time.  There were several large family gatherings, a couple of ‘Happy Birthday to you’ moments, smiling faces everywhere.  A really exciting, vibrant restaurant with good food credentials as well.  Mango Tree is the European flagship of the original in Bangkok.  Authenticity is key here, the food is very authentic and original at the same time. 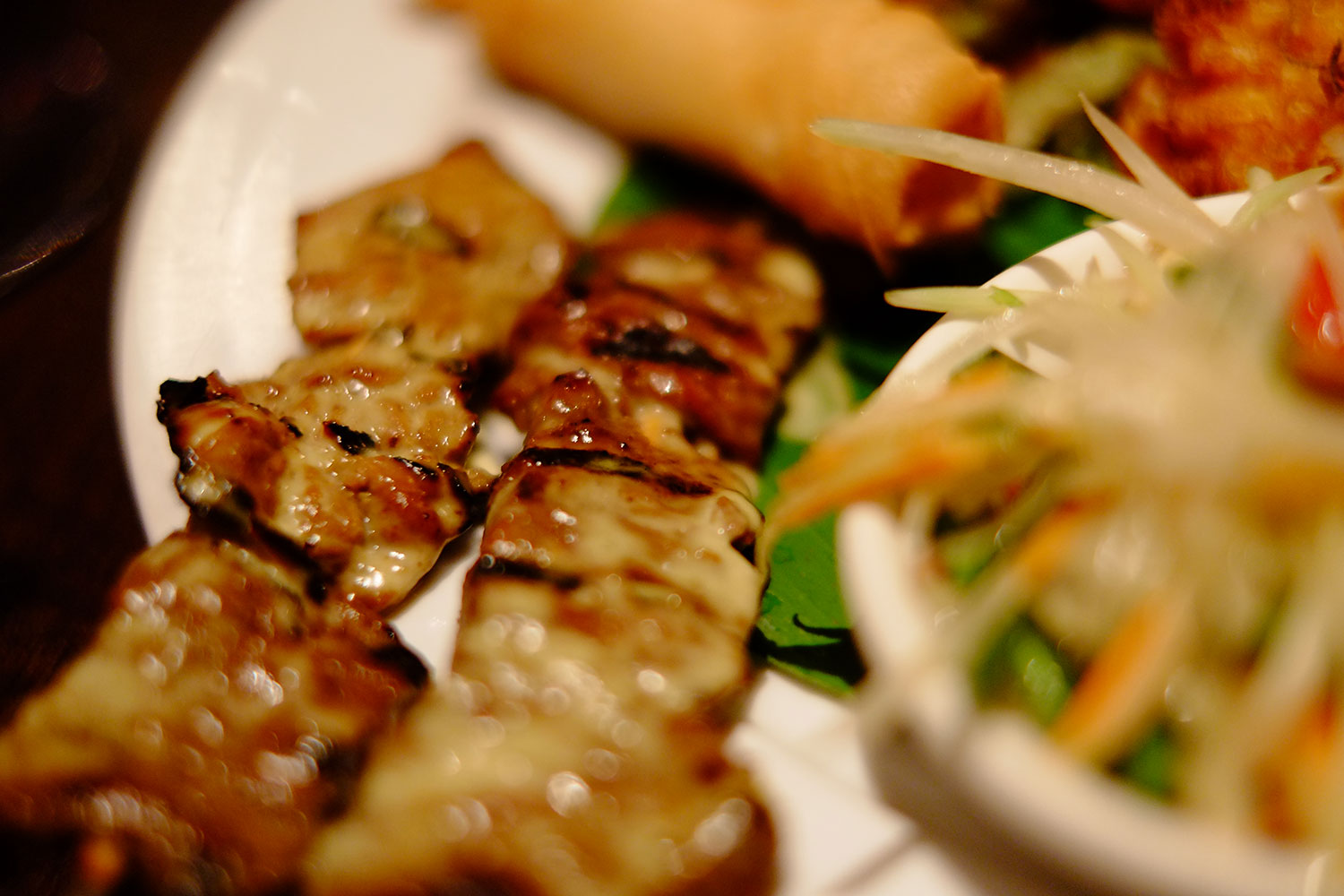 While perusing the extensive menu I received a text from my niece telling me she had had her work Christmas party there.  So it must be cool.  She has an interesting job working ‘In the thick of it’ not the excellent satirical TV programme but the real the thing – the government.  I can only begin to imagine how that evening played out after the wine started to flow. 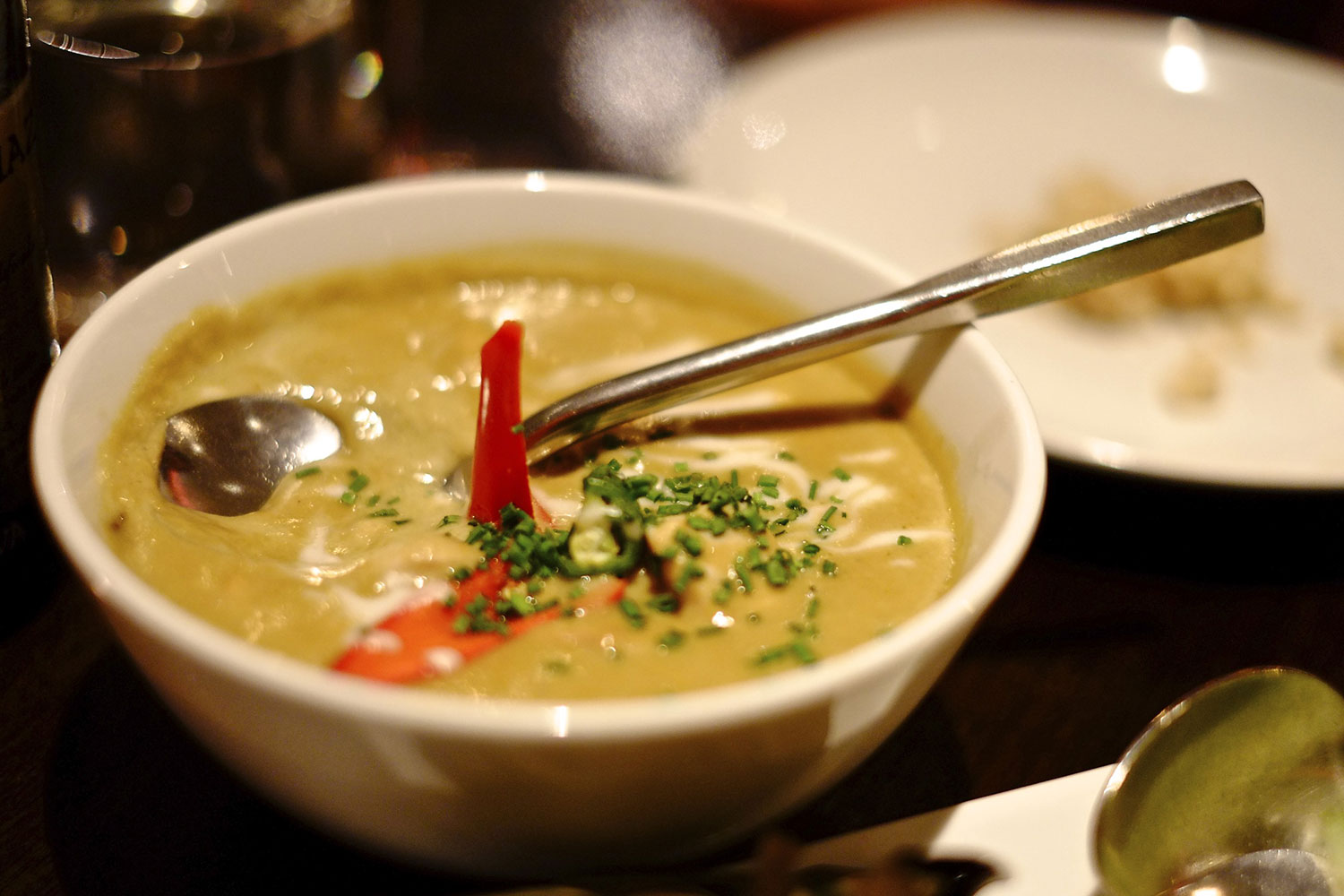 As well as the expected à la carte menu a tasting menu of sorts is on offer called a Royal Banquet where you get a selection of starters, mains and desserts.  But first to the cocktails, a Thai mojito, this slipped down rather well with the extra taste of lemon grass fitting in nicely.  There are many non-alcoholic options we tried a couple fruity beauties that worked well, just the thing for a driver or a sophisticated child.  Cocktails are priced around £10 and the wine is good but can be on the expensive side.  The service here is powered by charming staff talking to each other with secret earpieces it’s as if they work in security.  They certainly appear from nowhere silently to add or subtract from the table. 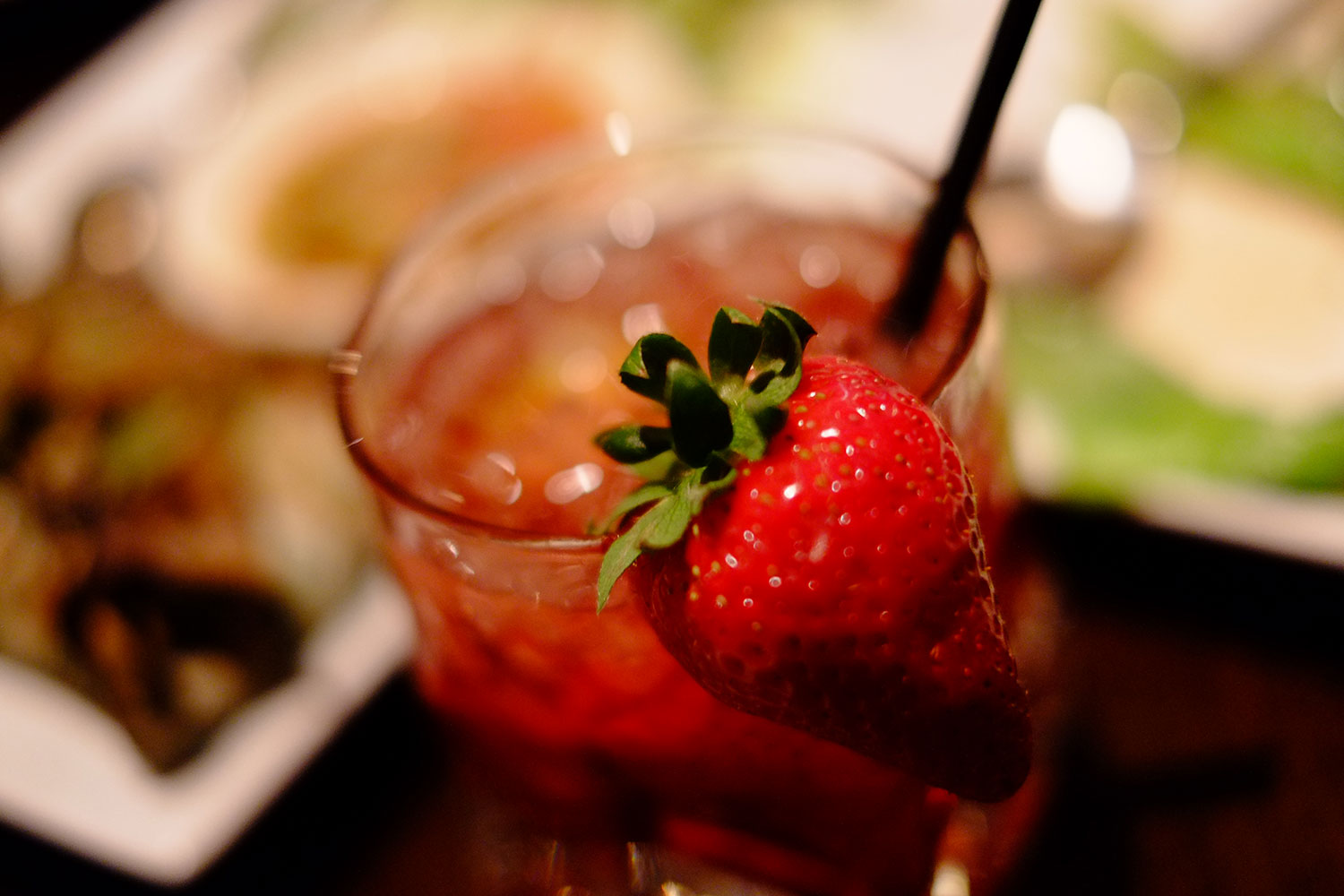 A large plate carried the mixed starters, which were on the whole good with the odd exception.  The chicken and beef satay got the thumbs up especially the beef was melt-in-the-mouth tender.  The peanut sauce had heat and flavour.  A couple of spring rolls with prawns and vegetables had the right crunch came with a sweet chilli sauce.  The weak link was deep fried sweet corn cake.  This was strangely chewy and didn’t taste of much.  A little papaya salad with lime dressing cleared the palette well. 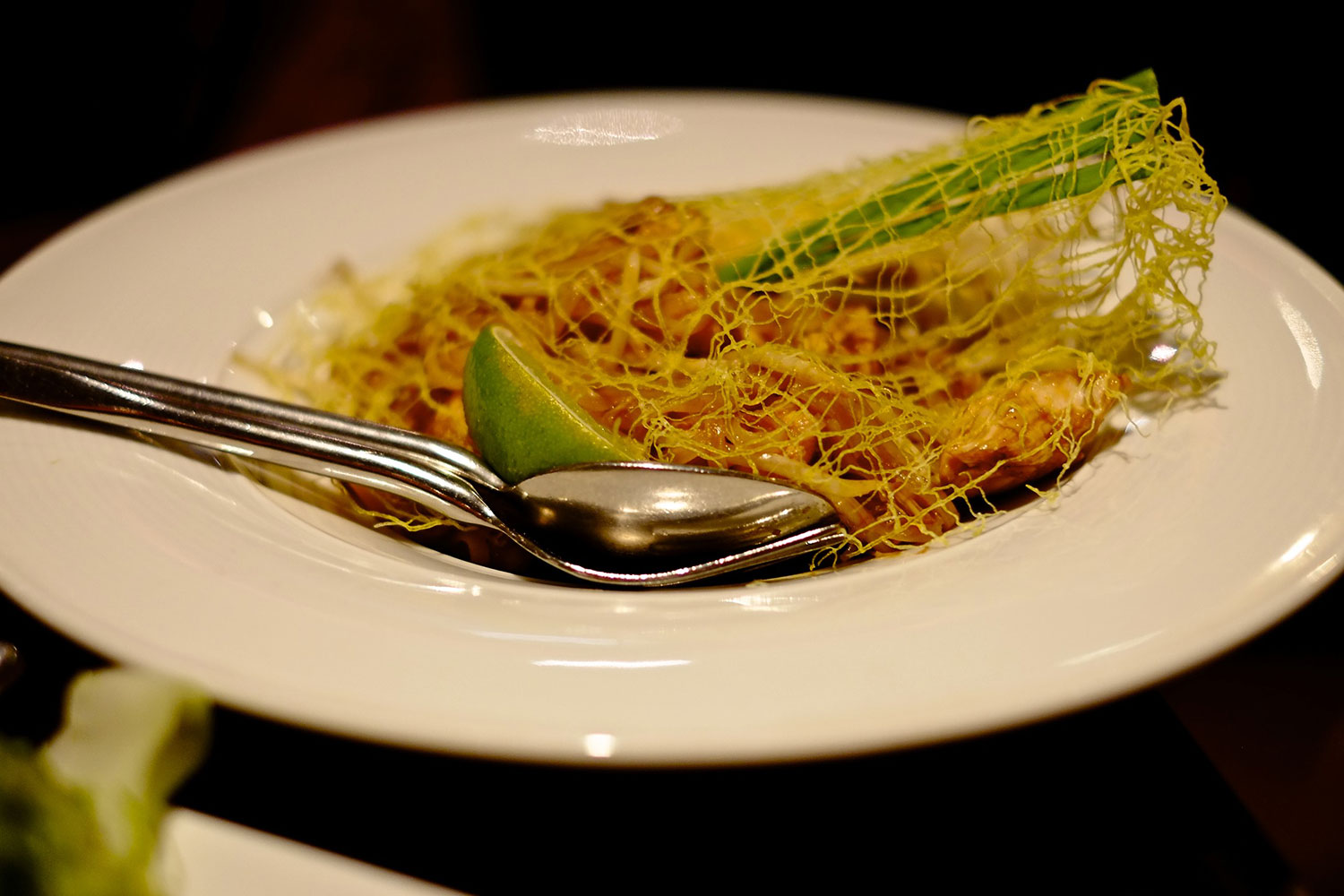 The Thai people are relentlessly polite, most of the staff are Thai and the Pygmalion of rituals they go through at every juncture of the evening must exhaust them as well as charming us.  They simply will not do anything without bowing, joining their hands in prayer and all the while smiling.  Professor Higgins would be smiling if he ate here. 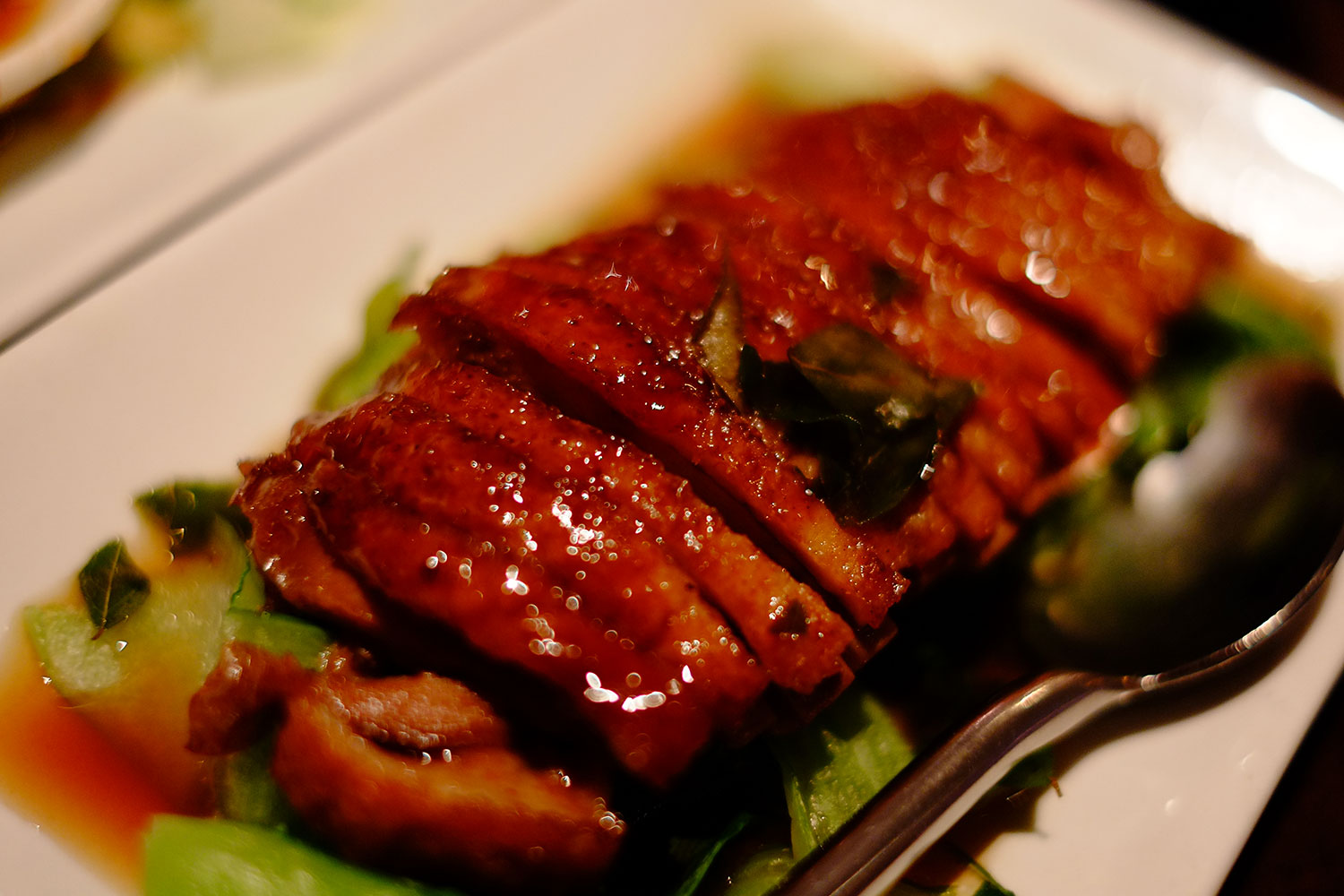 Smiling is what we did when our mains arrived via a series of covert actions at our table.  Chicken curry with coconut was thick and warming with heat but still retaining flavour.  A pad Thai came cloaked in a fantastic spun egg net over it.  The waiter then mixes it all up so the egg is integrated.  Steamed in a banana leaf the sea bass with lemon grass had just enough give, it was subtle but had a great flavour.  This is a kitchen where the priority is to keep standards high and for the floor to keep things secret, everything is done in stealth mode.  There were a few other bits as well as my absolute pick of he bunch, pad makham, slices of grilled duck breast wadding in a shallow sweet and spicy tamarind sauce.  Go to Mango Tree for this dish alone, it is sublime (if in fact it has lime in it or not doesn’t matter as it’s still great).  This is a glorious plate of food to eat, M and I did squabble a bit about who was going to have the last few slices, both of us thinking it should be the other as we had taken more than our share first time round.  Even food critics have morals (well almost, I let her have them because I was filling up rapidly!). 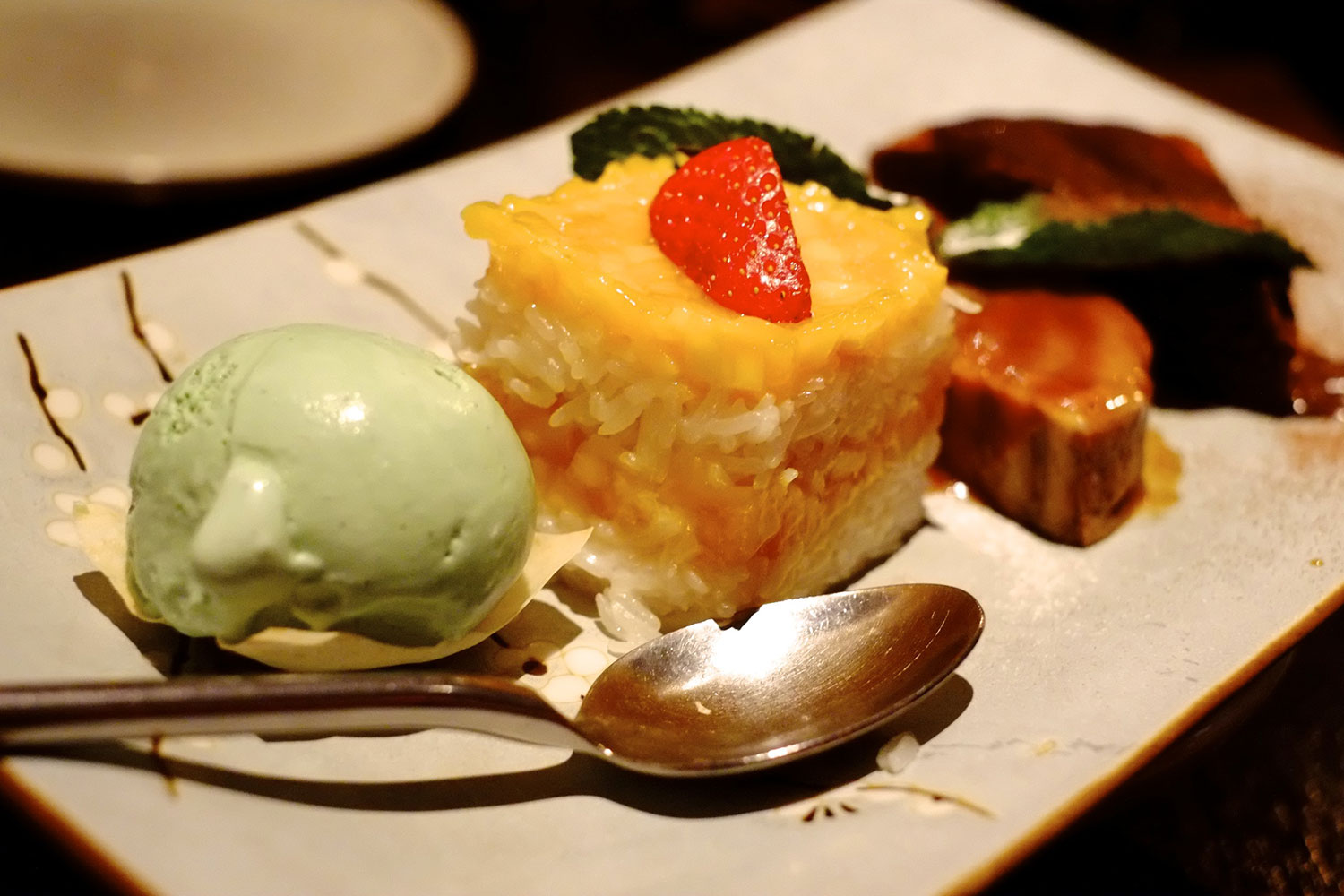 More covert than overt maneuvers happened around us, it was time for something sweet.  A large platter of four dishes appeared from nowhere.  The most successful of these was a baked banana pudding with caramel sauce.  Warm and comfortingly spice free it felt a natural end to a splendid meal.  A good but distractingly green vanilla ice cream had its moment with the pudding.  A chocolate sponge came with a thick sauce and was OK but a bit over cooked.  A honey mango rice with coconut stack looked good but didn’t deliver on taste, it had the (bad) feeling of school pudding dressed up unsuccessfully.  But it didn’t really matter, as the resounding success was such a success that most all other things eaten this evening just fade away from the memory, I think I will dream of pad makham for some time to come.

As the evening came to a close, finding myself stuck ‘In the thick of it’ I can only commend my niece’s recommendation, the government department she works for must be doing something right, at least when it comes to Christmas parties!  Don’t get tongue tied like they do on TV get pad Thai instead (or even better pad makham) like they do at the Mango Tree.