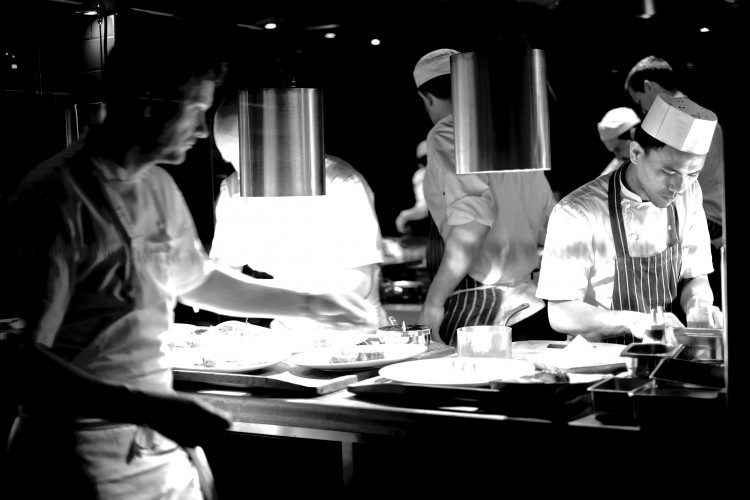 Jason Atherton has come a long way in a relatively short space of time.  From leaving home at 16, briefly cooking in the Army to working with Gordon Ramsay, launching branches of Maze in Australia, Qatar and South Africa, earning Michelin Stars for both Gordon and more recently himself with his ‘Social’ restaurants.  If that wasn’t enough he has opened up in Hong Kong, Shanghai and Singapore.  It’s quite a journey for somebody only just in his early forties.  Naturally awards have followed (too many to list here).  He is an affable, straightforward man who clearly has an eye for what works and most importantly what people want. 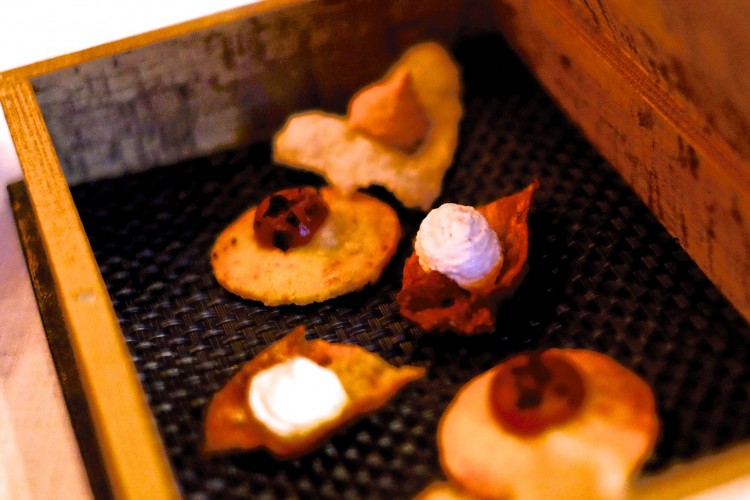 Pollen Street is a tiny road off Maddox Street in Mayfair, the sort of road that you might use as a short cut, that was until about four years ago.  The eponymous restaurant won a Michelin Star in its first year.  Atherton shows no sign of slowing down either.  His new venture City Social is set to open its doors in a couple of weeks where he promises to supply the demand for a more relaxed approach to fine dining, no tasting menus and long lunches guaranteed. 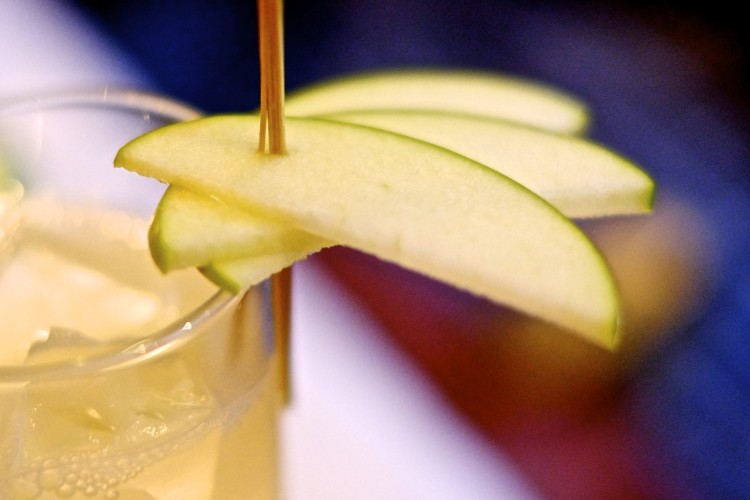 Our choice was simple as we looked at the menus before us.  I have no difficulty in deciding between a tasting-menu and a la carte, the tasting wins every time.  As you would expect the service from your first breath in the building is faultless.  Well-trained staff are the pulse of a good restaurant.  Without them it would cease to exist.  They are that rare breed who know what you’d like before you do.  A glass of Rosé Esprit Henri Giraud, France –NV as advised by the sommelier Lukasz Jan Kolodziejczyk set the tone for the evening – pure class.  M had an apple juice that was a picture of elegance with slices of apple perched on the edge of the glass it was of course fresh and delicious. 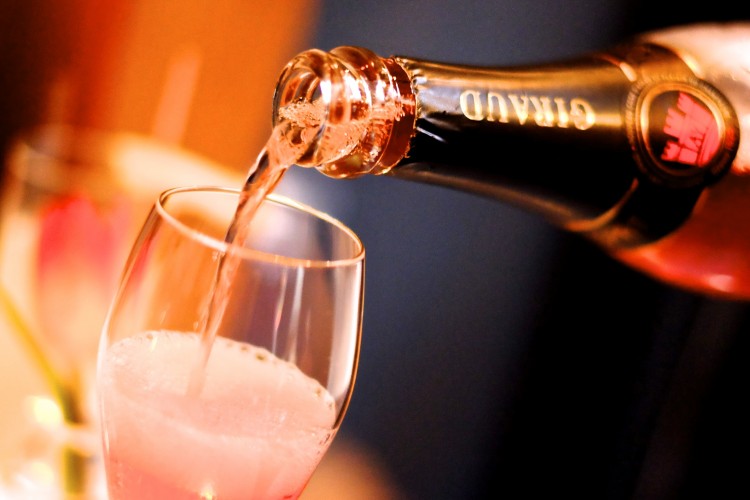 Lukasz asked me if I had any thoughts about what wine I might like with the £85 eight-course tasting menu.  I was happy to leave it with him expecting that would be that, but no, he probed and gently quizzed me until he had assembled what I will now call my ‘wine profile’.  It is like making a confession to a priest revealing your inner most thoughts about wine.  I do not have a vast knowledge of wine, but I do know enough to ask for what I like.  Lukasz seemed very pleased to have direction.  He is an excellent sommelier with a personal touch that is both charming and in possession of more information about wine than anyone I know. 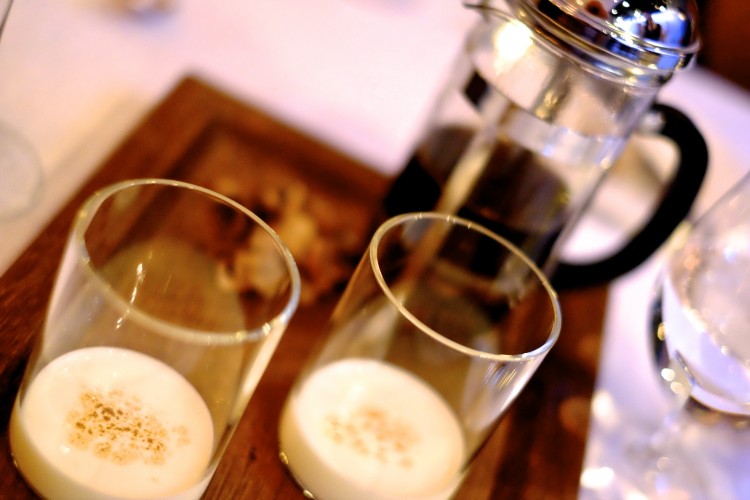 It states eight courses on the tasting menu but really it is a few more as they kept on bringing little bits and pieces that amused our mouths.  It kicked off with a wooden box fashioned to look like a book.  Maybe it was the first chapter of our long story?  Open it up and it had six little canapiés, all were good but my favourite was the truffle cream on a crispy slice of vegetable.  Next was mushroom tea, a cafetière with a gorgeous mushroom liquid is then ‘pressed’ and poured into a parmesan cream, you mix the two together and hey presto you have fantastic pheromone hit to end all pheromone hits, brilliant. 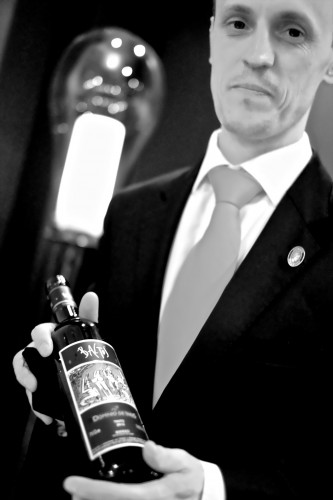 The wine was of course flowing and Lukasz explained everything, as I tasted each one before he poured a glass. For the ‘breakfast’ course we were presented with a giant ceramic egg, which inside held a real egg that had been filled with what you would find in a full English.  Playful and fun this was a more subtle flavour than the mushroom tea. 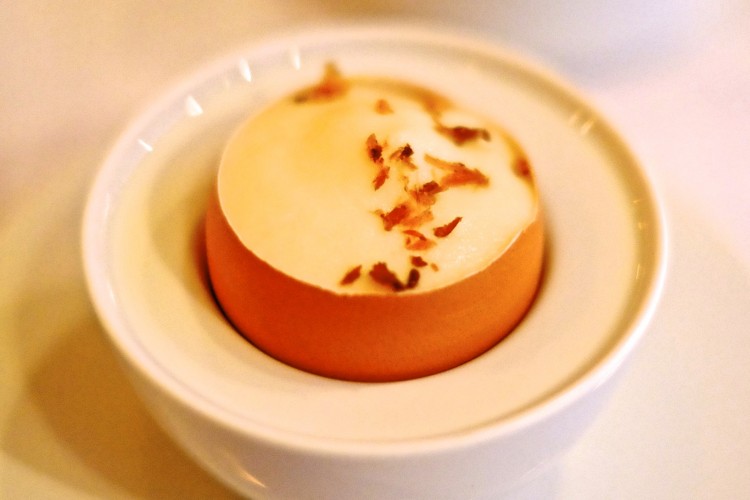 The Orkney sea scallop carpaccio, kohlrabi, frozen pink grapefruit, lemon skin puree, black olive and samphire (try saying that after too many glasses of the 2010 Le Soula, Vin de Pays des Cotes Catalanes that Lukasz served with this) was sublime.  It was a triumph of flavour and texture. The frozen grapefruit starts to melt immediately leaving an added citrus note to the already poky lemon, very good and almost too pretty to eat. 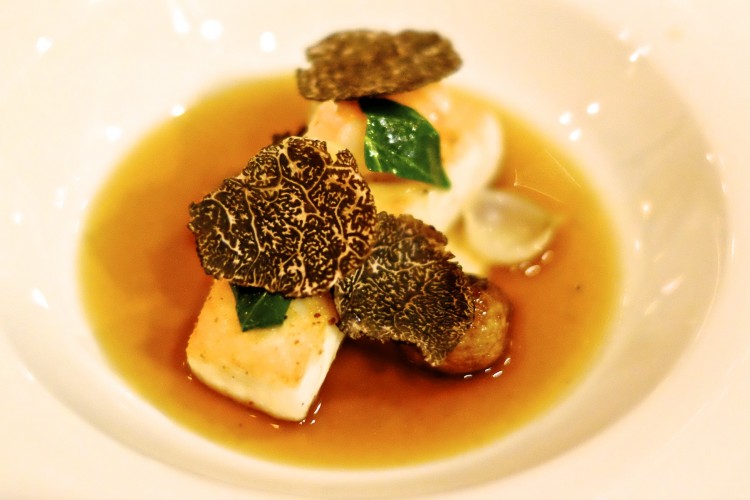 The restaurant was buzzing when we were there, no hushed tones of reverence found in some high-end establishments.  This is exactly what Jason and his team are trying to debunk.  By creating a normal chatty atmosphere you become relaxed and I feel probably enjoy the food more for it.  We talked to our neighbouring table, a charming couple, Roland and Elsie from Hong Kong who had eaten Jason’s food before and had come straight from the airport and a long journey to enjoy it all over again.  They spoke highly of his Far Eastern restaurants and were very excited to be in his London flagship. 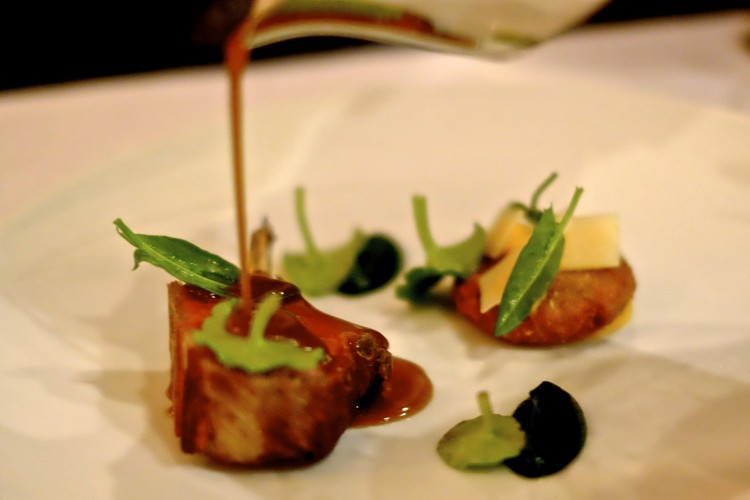 Roasted Atlantic halibut, gambas and onion broth, turnip, cabbage and truffle (lots of truffle incidentally) was yet another triumph.  This had a clean, fresh and crisp taste with a slight earthy finish of the truffle.  Again the presentation of the food was faultless.  Jason was at the pass checking every single dish that left his kitchen.  I talked to him later about this and he said it was a matter of pride that his systems worked well.  Although he has interests worldwide “Pollen Street Social is always home” he said.  The kitchen, which you can see through a wall of glass is a hive of controlled industry and I saw for myself that nothing gets past without being overseen by Jason. 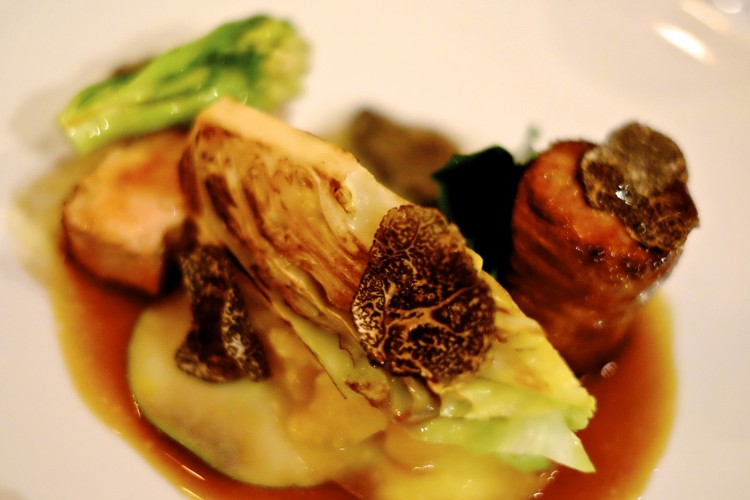 The next course was one of choice, unusually for a tasting menu there is a choice of the main event.  Either Cumbrian pork, pickled swede, crushed swede, pork belly and January King cabbage or Lake District rack of lamb, braised shoulder and shank, pumpkin fregola, parmesan, cabbage and apple puree.  M chose the lamb and I had the pork.  Both were superb and offering differing textures and tastes from different cuts, classic cooking at a high level.  To deal with all these big flavours Lukasz came to the rescue with a big hitter: 2006 Barolo, Paolo Scavino from Italy.  This had a ripe but fresh intense nose navigating the food well it was a great match. 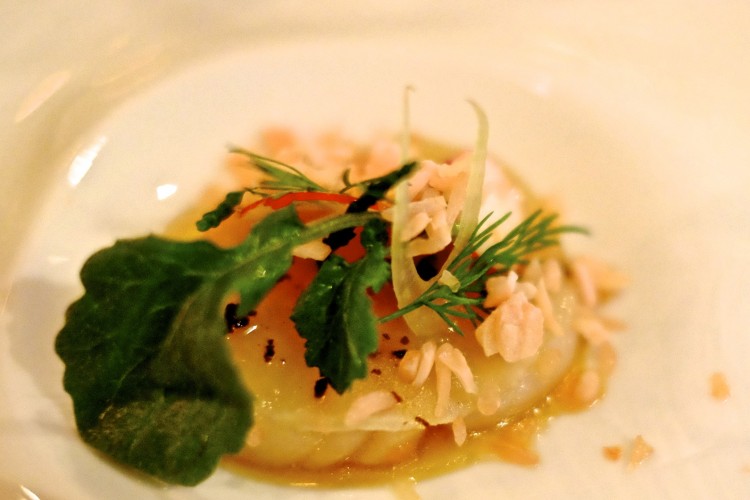 The next section of the evening was at the dessert bar.  You are asked to leave your table and perch at a cocktail like bar where they make desserts in front of you.  You also get a brilliant view of the kitchen from here.  So in no particular order a cleansing beetroot and blood orange sorbet with a yoghurt foam and orange powder was light and easy going.  Caramel popcorn and sweet corn cream was fun and a caramelised apple puree, vanilla cheese-cake cream, puff pastry, yuzu and apple sorbet was a lesson in food architecture while tasting delicious at the same time.  Finished with a touch of apple blossom it looked a picture. 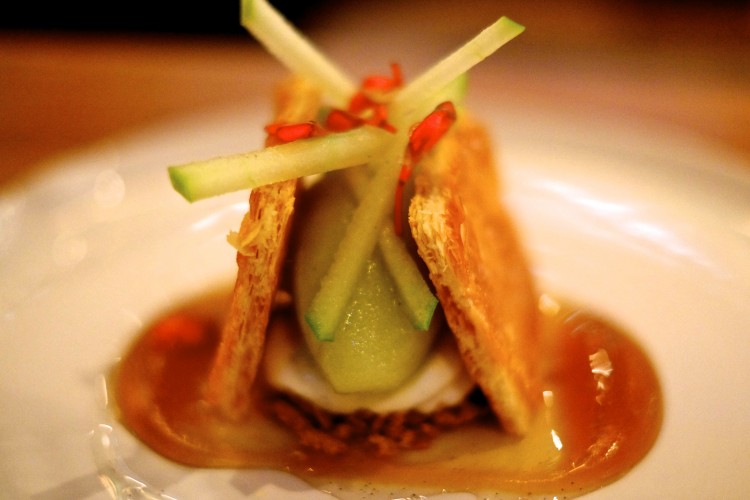 There is more than a touch of the theatre here and it’s fun to watch.  They make all the desserts for the tables as well, so you get to see plates from the a la carte being created.  This aspect of the meal is not only interesting but gives you an insight into the hard work and skill involved ‘behind’ the scenes.  It could be a wonderful treat for a family celebration. 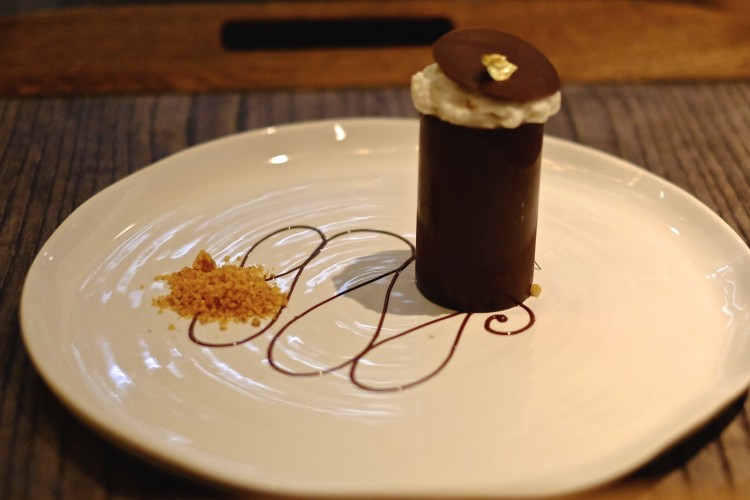 Pollen Street Social made a big impression on us both.  It oozes class and quality while preferring to err on the relaxed side of life.  And the funny thing is that it is very social (as was demonstrated by our neighbours).  The staff, were faultless and a special mention to Lukasz, when I asked where he had worked previously he casually almost bashfully told me “oh, I used to work in Bray at The Fat Duck, do you know it?”  Jason Atherton not only chooses his staff well but also has taught them to interact in a natural, efficient and charming way that provides some of the best service I have ever experienced.  So I urge you to try The Pollen Street Social for their take on ‘deformalised’ fine dining, but don’t expect Jason to come out and be too social, he’s too busy making sure your food is first class. 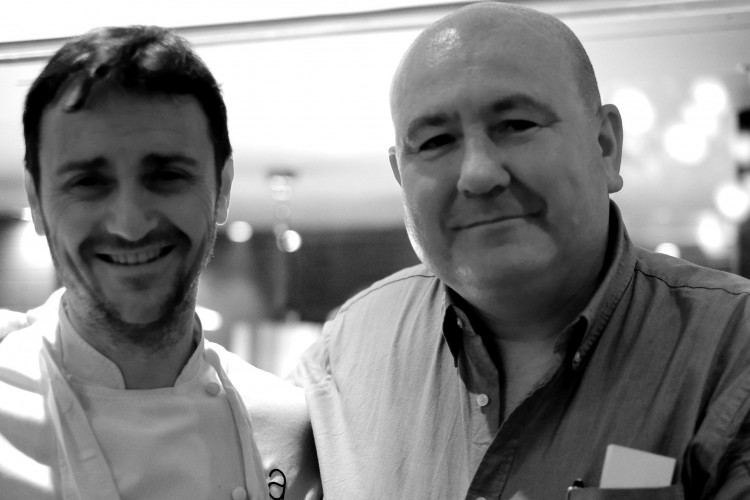 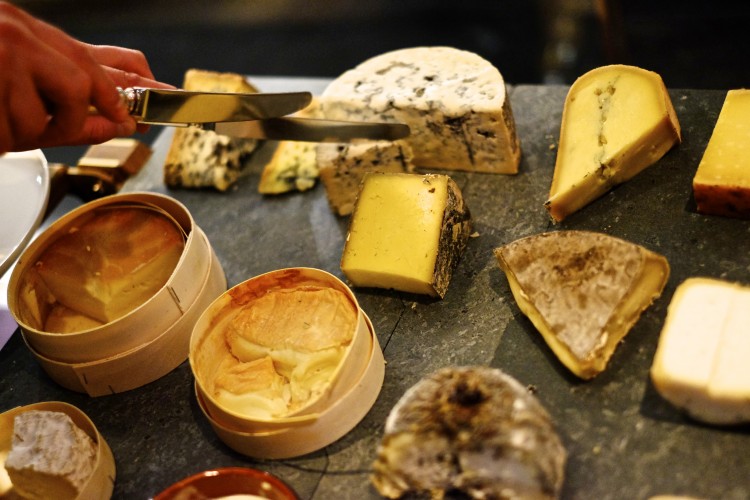