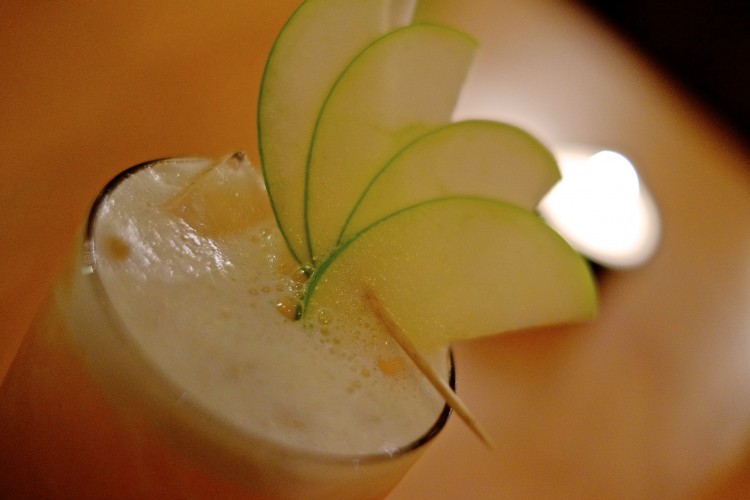 Saltwood on the Green is a village restaurant that could very easily be a backdrop to a Midsummer Murders mystery. Such is the quaint beauty of its location and the calm demeanor of the locals. I found myself here doing a double review; Saltwood on the Green Restaurant headed up by Jeff Kipp. An American interloper from Chicago travelling via New York and London found the love of a local girl lured him to sleepy Kent. And the astonishingly old and interesting Slaybrook Hall, a 15th century pile run by a couple of high end musicians and opera singers, Ben and Juliet Beven who simply have an amazing house packed with history. 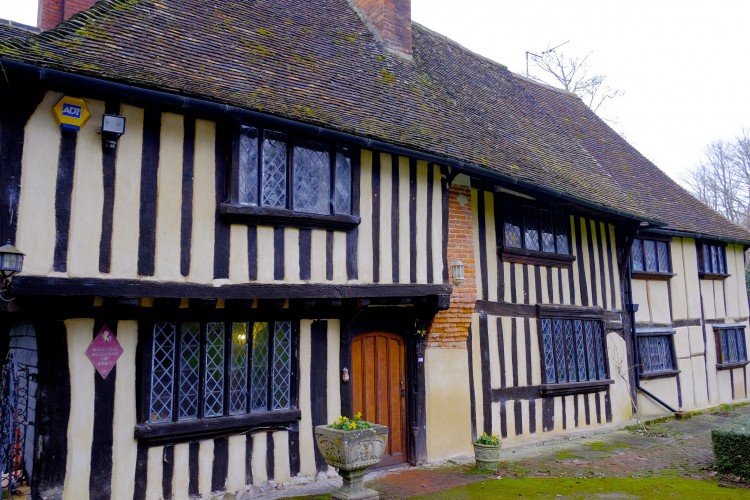 It’s not far from London to the outskirts of Hythe, just off the M20 where Slaybrook Hall is located. A substantial Kent Hall house that started life in c1460 then 60 years later the initial wave of DIY kicked in and it had a first floor added. Over the centuries additions and subtractions have occurred, the most recent important one is a rear elevation from the Arts and Crafts movement in 1915. Ben and Juliet have been slowly sympathetically renovating room by room. They now offer two bedrooms on a B & B basis except it is just B really, bed that is. They have an arrangement with the local restaurant Saltwood on the Green, hence the double review. Saltwood is a one-minute drive or a 10-minute walk from Slaybrook. 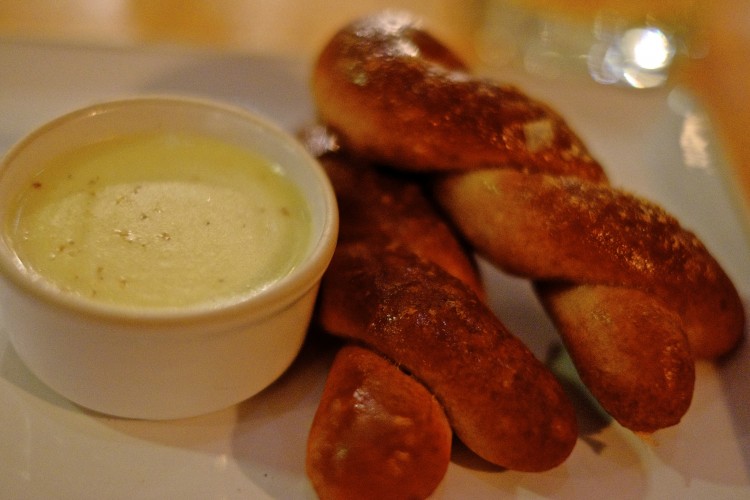 The restaurant was once a haberdashers, which is evidenced by the most splendid and enormous display cabinet with drawers and shelving across one wall. Looming down like a giant apothecary it holds nothing more chemically significant than cutlery and napkins these days. 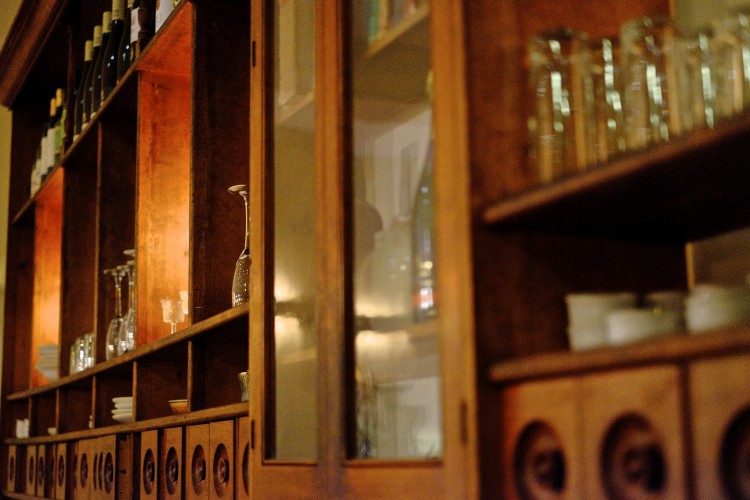 Gianpaolo Gori looks after the front of house. He’s well qualified having run his own restaurant in his hometown of Florence he then rocked over to New York and London working with some big hitters and a few stars along the way. He can mix a mean cocktail. 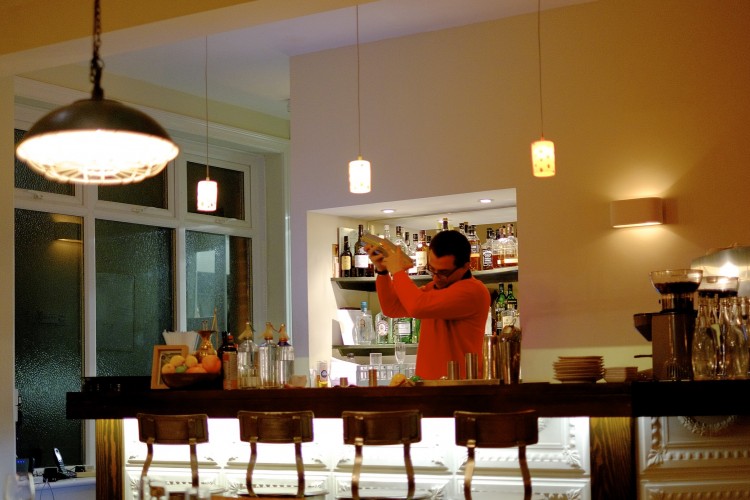 The welcome is broad and homely it’s a smallish space with enough room to feed 50 or so. The menu is comfortingly short but nonetheless intriguing. For nibbles I chose soft pretzels, rarebit. Pair of little plaited brioche-like breads that were chewy came with a small bowl of liquid rarebit. It had that slight mustard kick and a tang I was hoping for. 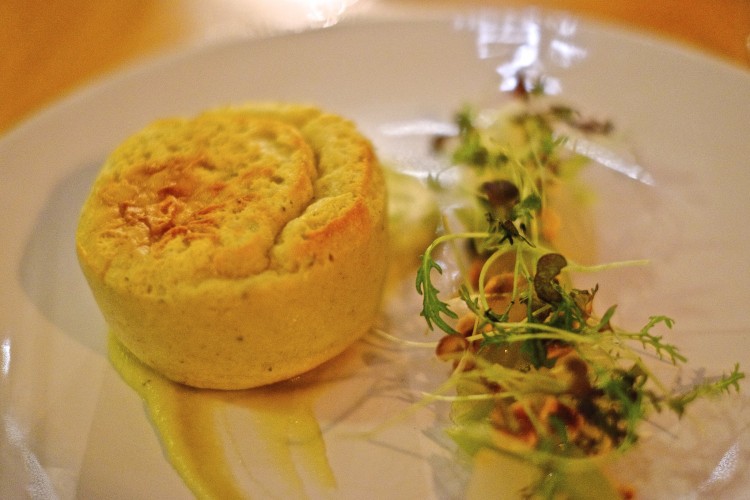 My first cocktail of the evening, an apple cider sour (yes it was going to be one of those evenings) was mixed by Gianpaolo and tasted fantastic, tart but with a sweetness that didn’t overpower. They make their own cider syrup here as well as other key ingredients, to watch this master at work is a joy, it looked a treat too with a perfect fan of sliced apple. 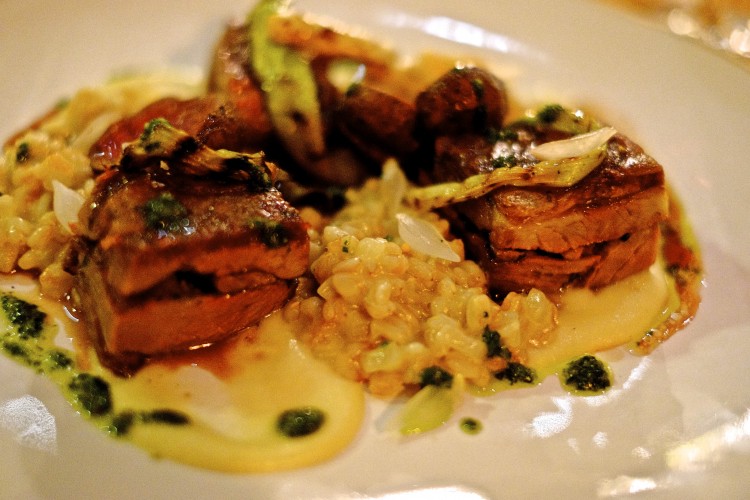 The starter was a twice-cooked Stilton soufflé, pickles and hazelnuts. It is often said that a twice-cooked soufflé is a chef’s cheat. I disagree it’s just a different dish. This was firm and spongy with a subtle hit of Stilton, the small salad of hazelnuts had the tiniest triangles of Stilton with them so you got that strong blue cheese buzz but in manageable quantities. I really enjoyed it and as a potentially rich plate I was grateful the portion was the right size. 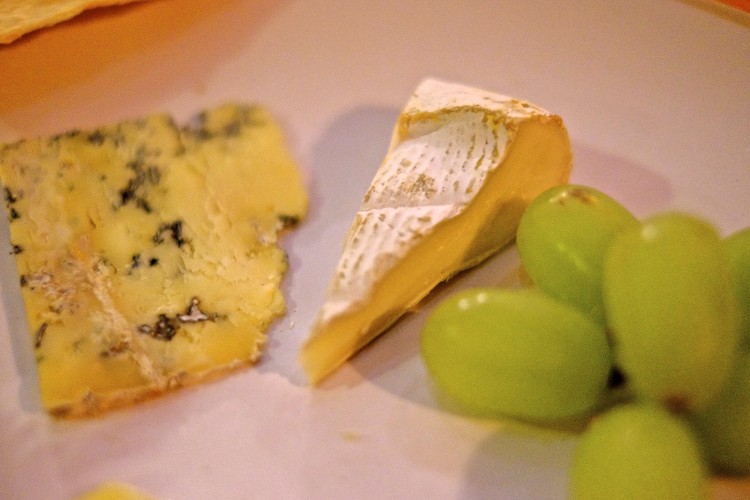 Gianpaolo has a vested interest in the smooth running of the place as he lives upstairs, Jeff lives down the road and all the staff are local, that’s the beauty of stepping out of London, you can be local. The food is local too my main was lamb breast and kidney, barley and onions. The lamb is from Romney Marsh and frankly was a perfectly balanced dish. The barley had been made into a risotto and the kidneys perfectly pink and tender. This is an adventurous menu considering the location but Jeff’s take is to provide a personal, friendly service for the diners. Jeff comes out at the end of the evening to chat and take feedback from the locals who are returning on a regular basis. Only open a few months and they already have a following. 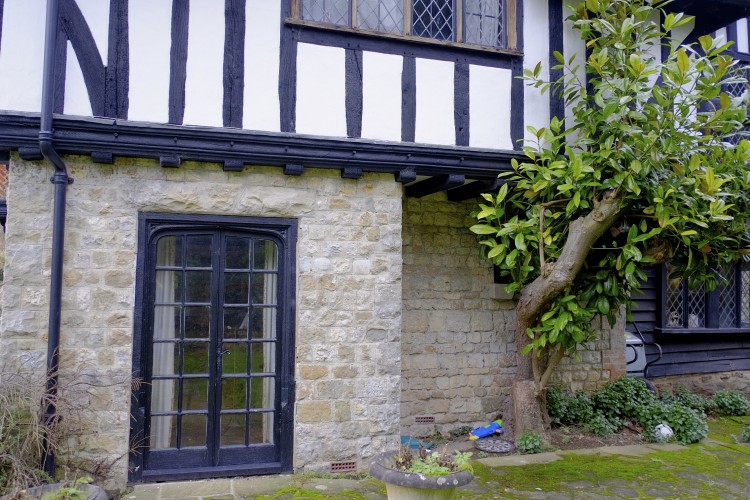 Earlier in the evening Ben who is an opera singer told me that Noel Coward was a regular visitor to the house back in the day and that the door from the music room to the garden provided some of the inspiration for his 1941 comedy play Blithe Spirit about the summoning of ghosts. The house certainly has a grandeur that Coward would have enjoyed. You can stay here for a minimum of two nights at a time and will be pretty much left to your own devices.             The family live there as well and life just goes on as if you were a houseguest. You will not find umpteen pamphlets in the hallway or signs asking you to use certain rooms or be back by certain times. Ben and Juliet are charming hosts and delighted to chat if you’d like to. 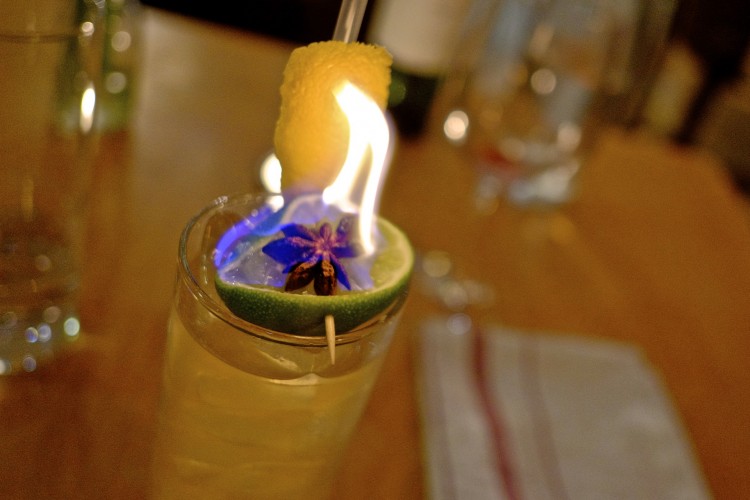 The food continued with a very local cheese board (I noticed outside the kitchen a small whiteboard with the cheeses named for staff to refer to – I approve) The homemade chutney was also good. With my dessert I thought it was time for another cocktail. This time a bit of theatre was called for. Captain Kipp’s Navy Grog was described as rum, lime and warm spices. As with most things at Saltwood I was learning to expect the unexpected. My drink arrived with half a scooped out lime with a star anise alight. As the alcohol from the rum burns off you flip the lime and the star anise falls into the drink adding more flavour. It tasted great and looked fab, a real showstopper of a drink. 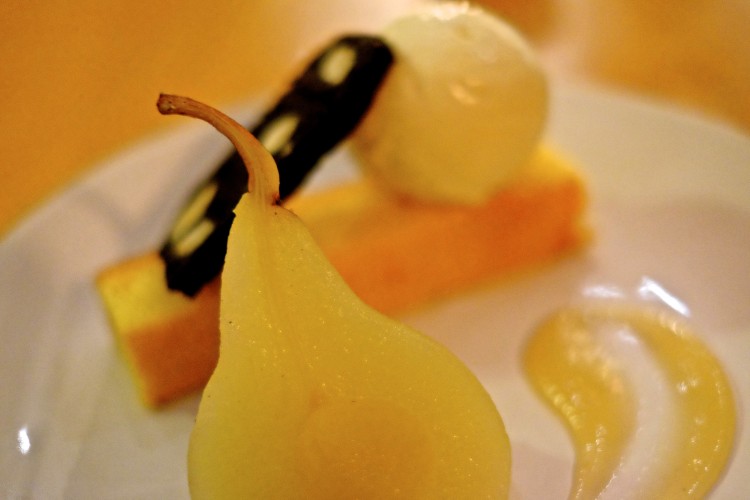 My almond cake, poached pear, hay ice cream and burnt hay biscotti was in the main well done. My biscotti was sliced too thickly and proved rather hard to eat but the rest of it worked well and it was a generous end to an excellent meal. 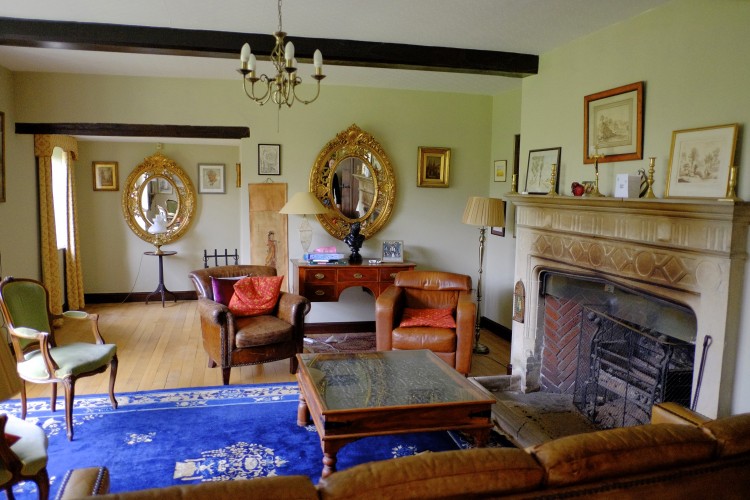 Back in my cavernous room at the Hall I realised that this sort of house is not for the faint hearted. There are drafts, noise travels and everything is very old and wobbly. I loved it! The character of this house makes it worth putting up with the odd foible any two days of the week. 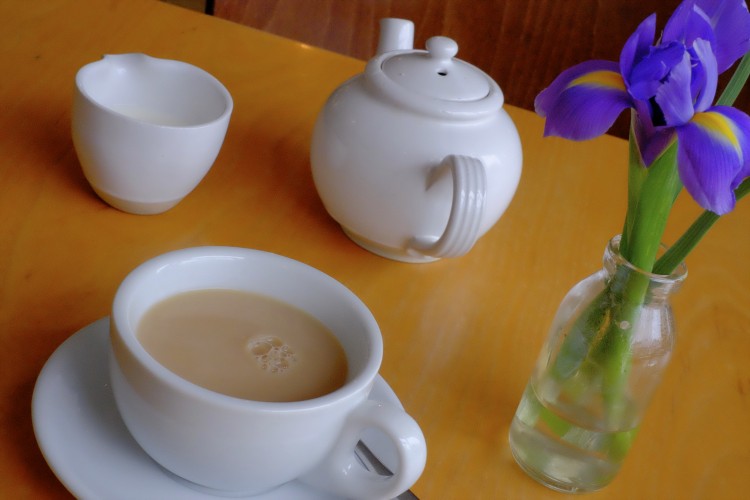 As I mentioned breakfast is something they don’t do at Slaybrook (they will run to a coffee or cup of tea) but do not worry because Saltwood will come to the rescue. Their breakfast menu is short with a few egg options including smoked salmon, streaky bacon and some pastries and cakes with tea and coffees bringing up the rear. The poached egg, pork belly hash with mustard aioli was divine. I could have eaten two (or even three at a push) of these. The pork belly is an inspirational ingredient for breakfast and was packed with flavour. The egg was a perfect runny yolk variety and the aioli the matched foil to the rich pork. This is worth getting up for and if you have to, go for a long country walk to burn off a few calories and order another one, they are that good! 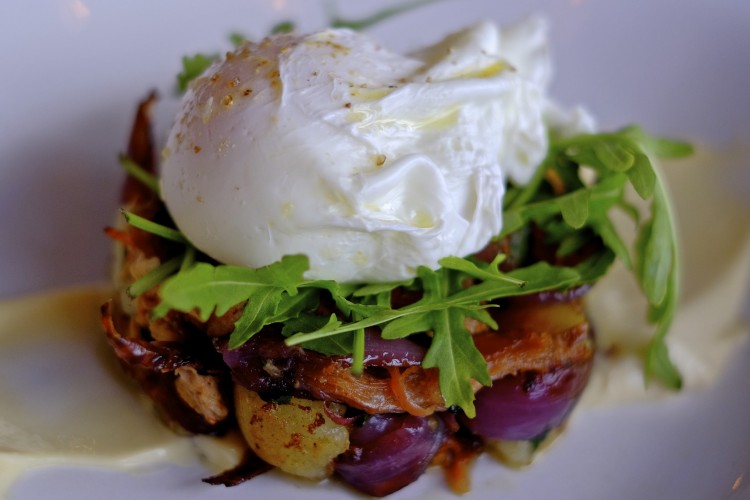 This sleepy part of the garden of England provided me with some superb food, a welcome bed in a wonderful house and perfect hosts. It’s hard not to recommend both my experiences. As I write this, the snow is blustering outside my window and the night drawing in. The memory of sitting in the snug at Slaybrook nursing a glass of wine watching the fire flickering and chatting with Ben and Juliet is strong. I wish I lived there and had Saltwood as my local restaurant. Maybe I’ll return one day as a Blithe Spirit and do it that way. 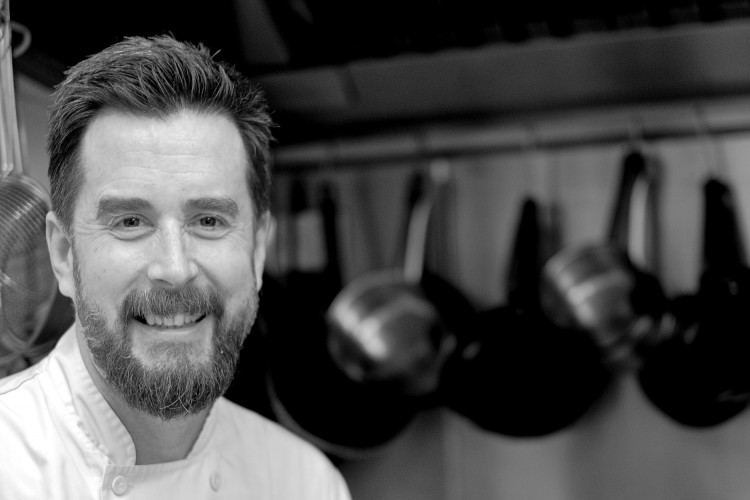