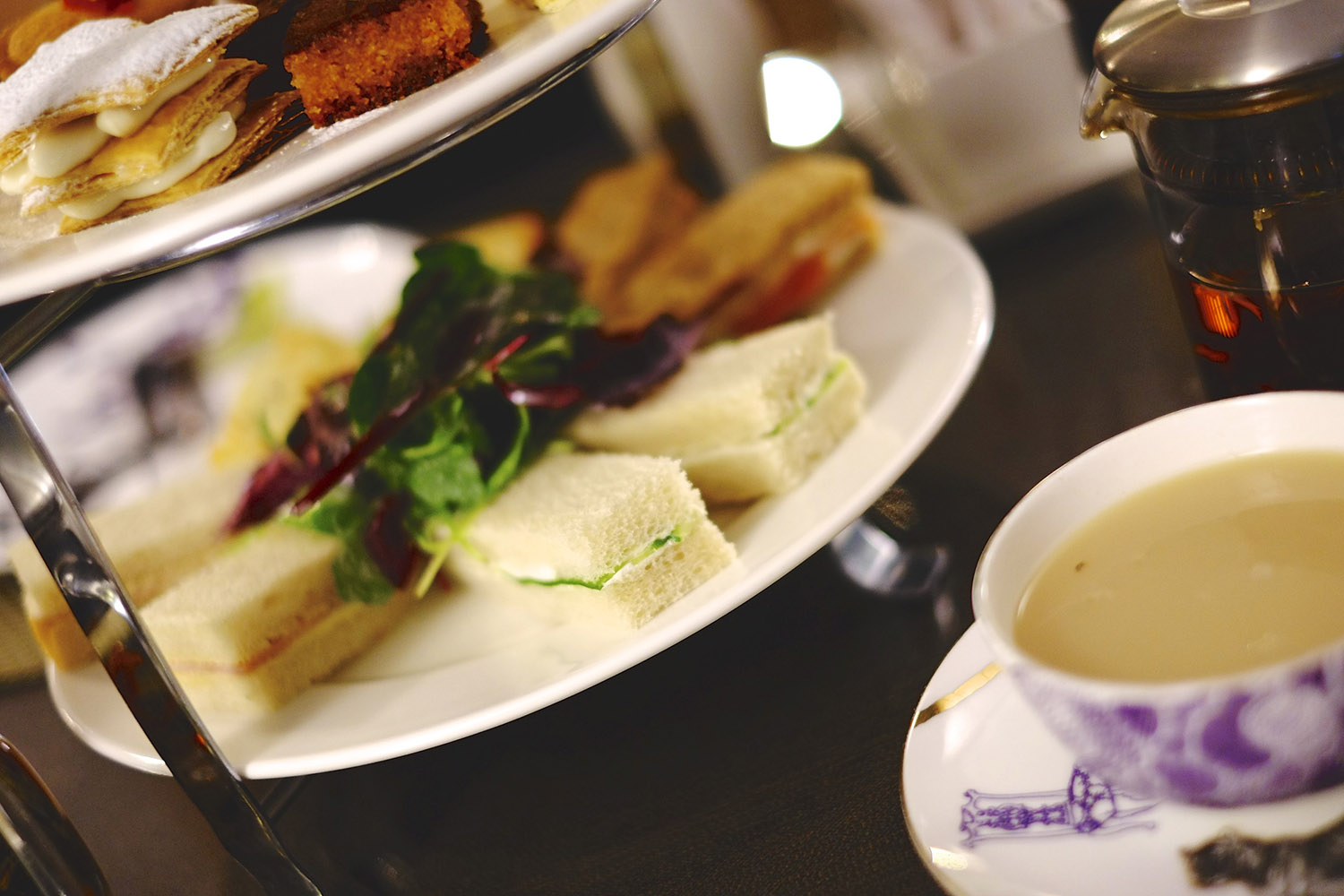 Only an architect fully trained in the disciplines of theatre design could create the fantastic confection of rich plasterwork and undulating balconies that overlook the double height reception of St Ermin’s hotel.  J P Briggs completed this work converting it from a mansion block to hotel in 1899.  Leading off from this grand entrance is a series of opulent reception rooms.  As you wander you’ll come across the Library, which is where afternoon tea is served.

St. Ermin’s holds more than glorious architecture, it holds many secrets. It was here that Churchill set up the Special Operations Executive during WWII, also where Kim Philby and Guy Burgess met with their Russian controller during their tenure as members of the Cambridge Five.  The most treacherous spies this country has ever known.  In fact so frequented by political movers and shakers it even has its own division bell to remind stray MP’s to return to the House to vote.

Upon arrival our waiter immediately took our seven year old to one side and explained to him he was going to be recruited as a spy for the hotel and handed him an envelope marked ‘Top Secret’.  We pretended not to see as he quickly looked at his instructions.

We on the other hand had the afternoon tea menu to read.  Very pleasing to the eye, the first thing to note is they take their tea very seriously indeed: Jing Japanese Sencha or Jing Flowering Osmanthus, Jasmine Pears or Jing Pheonix honey orchid?  We did try the flowering Osmanthus as it has a hypnotic way of opening before your eyes in the clear teapot that is quite a delight.  A very gentle flavour seems to match the speed at which it brews.  Our seven year old thought it was alive.  I could see what he was getting at.  Of course there were others; 2nd flush Darjeeling, a Jing white peony Fujian and many more.  They harvest a subtlety often missed with the very serious business of afternoon tea.  Don’t worry if you’ve never tried any of these the waiters are highly informed.

It is curious that some of the country’s greatest enemies from within elected to meet in the very embodiment of what they betrayed.  Churchill, a regular (though not for tea I might add, his tipple was much stronger) is said to have had a tunnel he used to return to the House in a hurry.  MI6 also had use of the two top floors where recruitment was undertaken concealed under the cloak of anonymity.  Our son had started behaving in a noticeably attentive manner he was looking around cautiously and then asked if he could have a ‘little walk’.  We let him explore, the environment was perfectly safe.

The hotel keeps its own bees on the roof and uses their nectar in the afternoon teas.  At £25 per person it offers a meal in itself.  The finger sandwiches were precise, so precise I’d say they had been measured with a ruler.  Honey roast ham, cream cheese and cucumber, smoked salmon were all present and correct.  What I wasn’t expecting was hot grilled Ragstone goat’s cheese on toast.  This was a most welcome addition this was original and very tasty, especially on a cold winter’s day.  The sweet section of the beautiful tiered cake stand had an orange polenta cake, which had a subtle zing and was so light.  Other subtleties were honey and almond Bakewell tarts.  Some honey caramel and a chocolate mousse didn’t last long.  The only odd thing was an incongruous creamy goat’s cheese and honey mille feuille, which was neither sweet enough nor savoury.  Quite out of place I felt.

By now the seven year old agent was talking to the front desk and concierge then writing surreptitious notes on his ‘Top Secret’ envelope.  He disappeared upstairs to the balcony glancing back to make sure no one was following his clandestine move.  Who knows what or whom one might find lurking in the shadows of the St. Ermin’s hotel.

A little later our agent returned with a member of staff who announced very discretely and for our ears only that he had passed the first round of recruitment.  His reward? A free non-alcoholic cocktail which pleased him no end.  We did ask him what he had been up to but his only reply was “all I can tell you dad is I’ve been on a mission for Queen and country”.  With that he smiled a knowing smile and returned to sipping his cocktail.

Afternoon tea at St. Ermin’s is a delight.  Everything here is charming, the waiters knowledgeable and clearly discrete.  The feeling of being part of something nobody else knows about is palpable.  This is a gem of a hotel for children and adults alike.  If you wanted to enter into a ‘honey trap’ but wish to keep your modesty intact I’d say a clandestine afternoon at St. Ermin’s is just the ticket.  Just keep it to yourself you never know who might be listening.