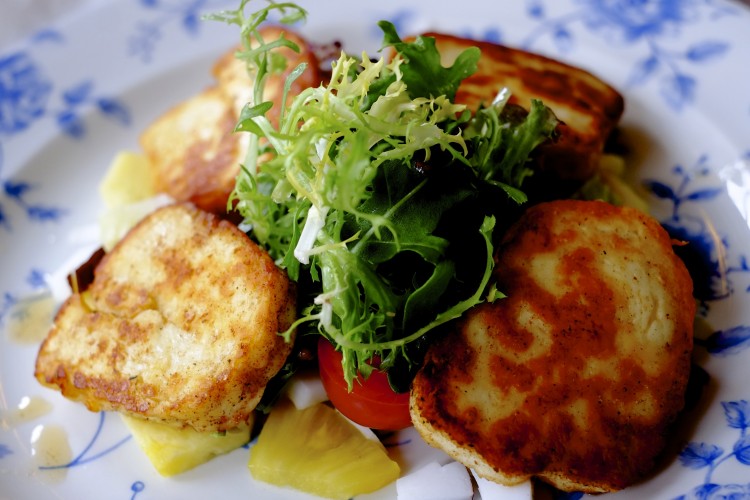 There is much talk of the traditional English pub disappearing before our eyes.  Well, not in Bodiam East Sussex, The Castle Inn is very much alive and kicking.  It stands alone with a view across the valley to the eponymous castle and just a short walk from The Kent and Sussex Steam Railway.  We visited on what I think was the hottest day of the year and they couldn’t have been more accommodating with large pitchers of iced water to cool us down.  We were very grateful. 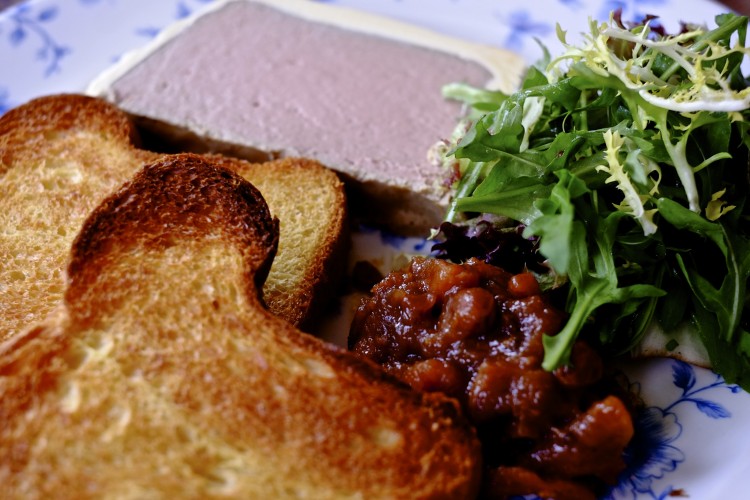 There are two chefs, one of whom is the patron James while his partner Wendy takes care of front of house.  The menu is quite long.  Our visit was on Sunday so roasts were the order of the day.  As well as hot food they offer a range of sandwiches.  More places should do this, as sometimes it is exactly what you need instead of a hot meal. 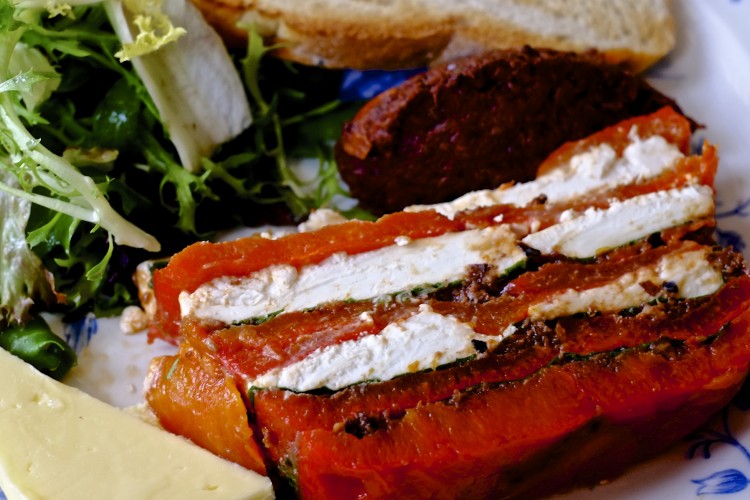 To start we ordered a chicken liver parfait with a splendid fig and apricot chutney, which tasted great; a spiced haloumi with pieces of coconut a pineapple and mint salad didn’t have the promised spice but was good.  The haloumi was nicely toasted.  I had a really refreshing terrine of roasted red pepper, basil and goats cheese with an olive tapenade.  This was summer on a plate, cool and tasty – I enjoyed it.  Also as is becoming a bit of a habit we ordered some crudities for our eight year old, not on the menu but they willingly obliged.  Full marks to The Castle Inn. 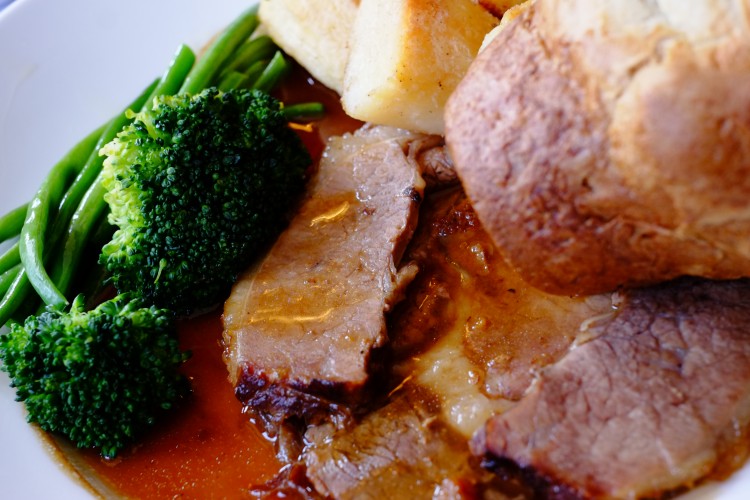 Mains had a ring of tradition that is befitting such a splendid pub, roast fore rib of beef and Yorkshire pudding, leg of pork with crackling and a homemade steak burger.  The roasts were fine but didn’t sparkle.  Probably because the starters had been very good I was expecting something ‘extra’ but a roast is a roast and sometimes it’s best not to mess with tradition.  The youngster had a mini roast from the children’s menu though it seemed quite large to me. 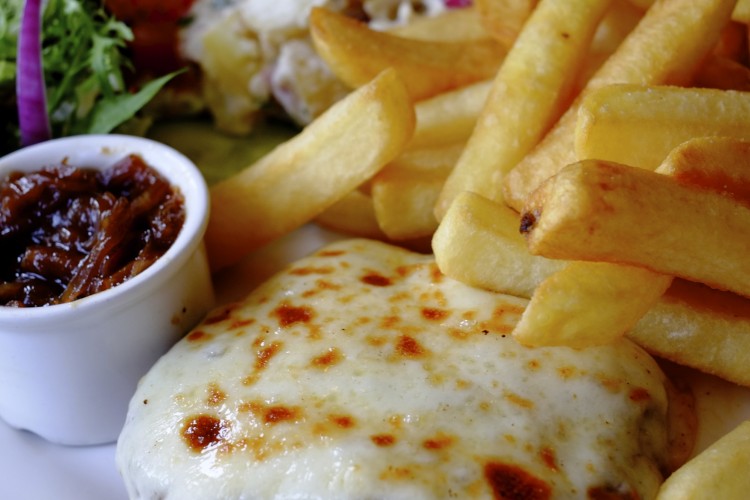 We had spent the morning wandering around Bodiam Castle.  If you haven’t been it’s worth the trip.  A classic castle in size and stature it sits in a large moat.  Although technically ruined it is possible to climb to the top of several towers and enjoy a spectacular view.  There is also a great little film to fill your gaps in historical knowledge.  On our visit a lady dressed in medieval clothes was giving a lecture on the grass courtyard to an enthralled audience.  Brass rubbing was being enjoyed by a new generation of children, all the staff here were very helpful and full of facts. 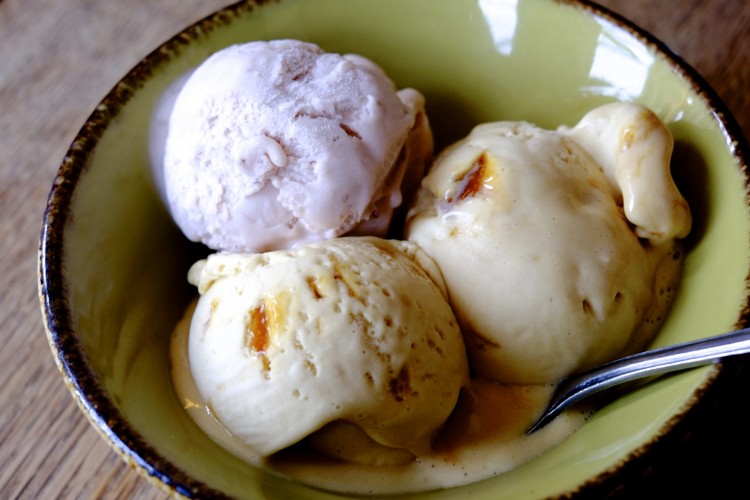 They have a large garden that you can eat or drink in at The Castle but it was too hot for us so we sat in the cool indoors.  It’s a very pretty pub with a fantastic mural on the ceiling of one room depicting the Bodiam Castle.  An unusual and well-executed piece of art that you don’t realize is there at first but once you’ve seen it you can’t stop looking at it. 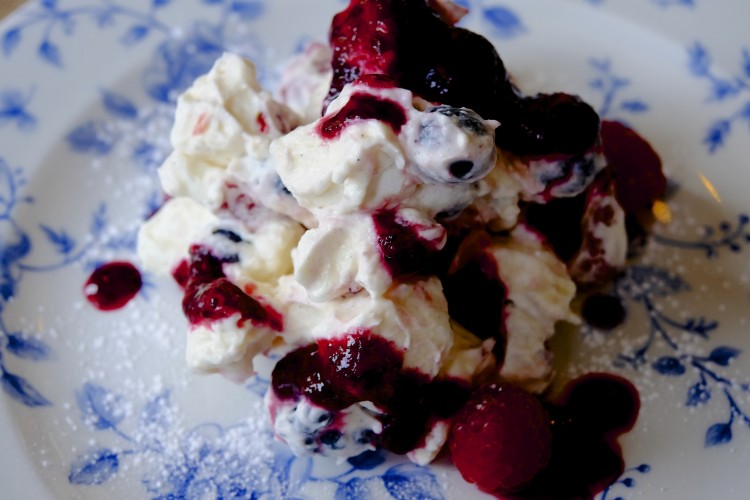 It was time for dessert and here The Castle really starts to show off.  A number of traditional offerings make an appearance such as sticky toffee pudding, chocolate fudge pots.  We decided to go for lighter options.   An Eton mess was super, large chunk of meringue and plenty of fruit, sorbets that had great flavour length, especially the raspberry and lemon.  I chose a selection of ice creams the strawberry was excellent and locally made as was the truly indulgent honeycomb. 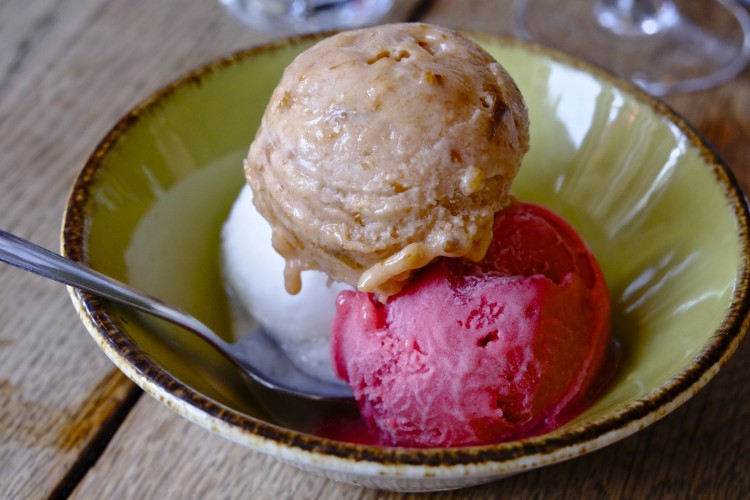 The Castle Inn is a great pub, very popular with locals and newcomers alike.  The food is good and accomplished but I wish I had been a bit more adventurous and steered away from the roast.  It wasn’t bad at all but I would like to have seen what else they could do.  M’s steak burger with melted mozzarella was up there with the best.  Take a trip to this part of the world or as they call it 1066 country and you won’t be disappointed, you can achieve the quintessential day out in the country, a great castle to visit, super pub to lunch in and a steam railway ride to finish, now what could be better than that. 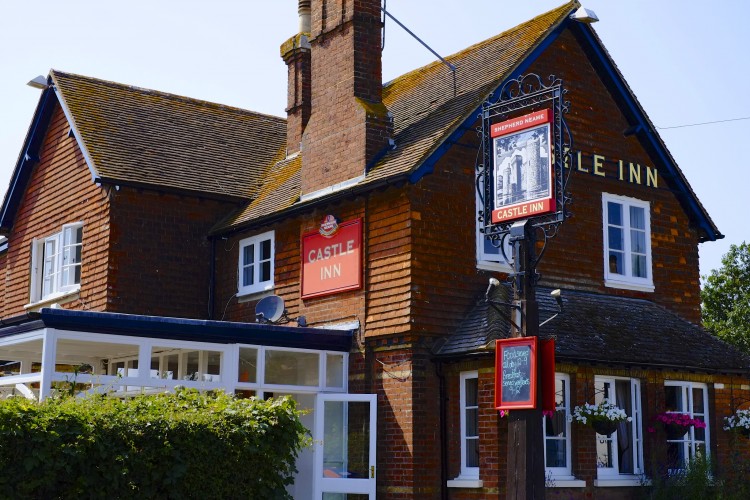