May the Irish hills caress you,

May her lakes and rivers bless you,

May the luck of the Irish enfold you,

May the blessings of St. Patrick behold you.

This unattributed quote is as wise as it is old.  The Irish are a beguiling nation with a rich and green land at their disposal.  With St. Patrick’s Day nearly upon us I had the good fortune to travel to Ardmore, County Waterford recently to stay at The Cliff House Hotel owned and renovated by Gerri O’Callaghan and opened in 2008.  A long-standing community of artists and writers live on this panoramic stretch of coast, it has always been a playground for Ireland’s gentry to holiday and relax.  I had come to experience the art of a local resident, Martijn Kajuiter.  His medium is not paper or oils on canvas but local produce presented on a plate.

Martijn has travelled from Holland and made Ireland his home.  The food his team creates is outstanding on many levels.  He uses locally available produce and grows much of it himself in a poly-tunnel and herb garden.  Controlling the quality is always foremost in the mind of a kitchen artist and an artist he is.

Perched on the side of a cliff with wrap around balconies and the Atlantic swirling below The Cliff House Hotel has established itself in just five years a foodie destination that boasts a Michelin Star.  I think another may follow soon.  All 39 rooms and suites face the sea and many have balconies.  The five star view is matched by the five star service of all the staff who can’t do enough to help.

We had to try the tasting menu which, including a fluttering of amuse bouche came in at ten courses.  Firstly don’t be put off, all the plates are a sensible size and secondly put aside three to four hours for this odyssey of colour and taste.  Some beetroot macaroons cemented with a gentle goat’s cheese cream sat on a box of stones.  It took us some time to realise was that some of these were edible, tiny baked potatoes dusted to match the others.  It is playful food on offer here, it’s not trying too hard to be clever, of course that is what makes it clever.

The emphasis is on creativity and construction, each dish is explained as it arrives, I think this was a good process as it gave me time to look and appreciate what was before me.  My fellow diners did not share this view and became mildly irritated by such ceremony, but for me it’s part of the fine dining experience.

The food continued to arrive, the west Cork scallops with jelly cubes and a vibrant green sauce played beautifully across my plate and were fresh, tasty and gently crisped.  A purple sprouting broccoli with hints of Cheddar, hazelnut surrounding an organic poached egg and fresh truffle shaved at the table met with my full approval. 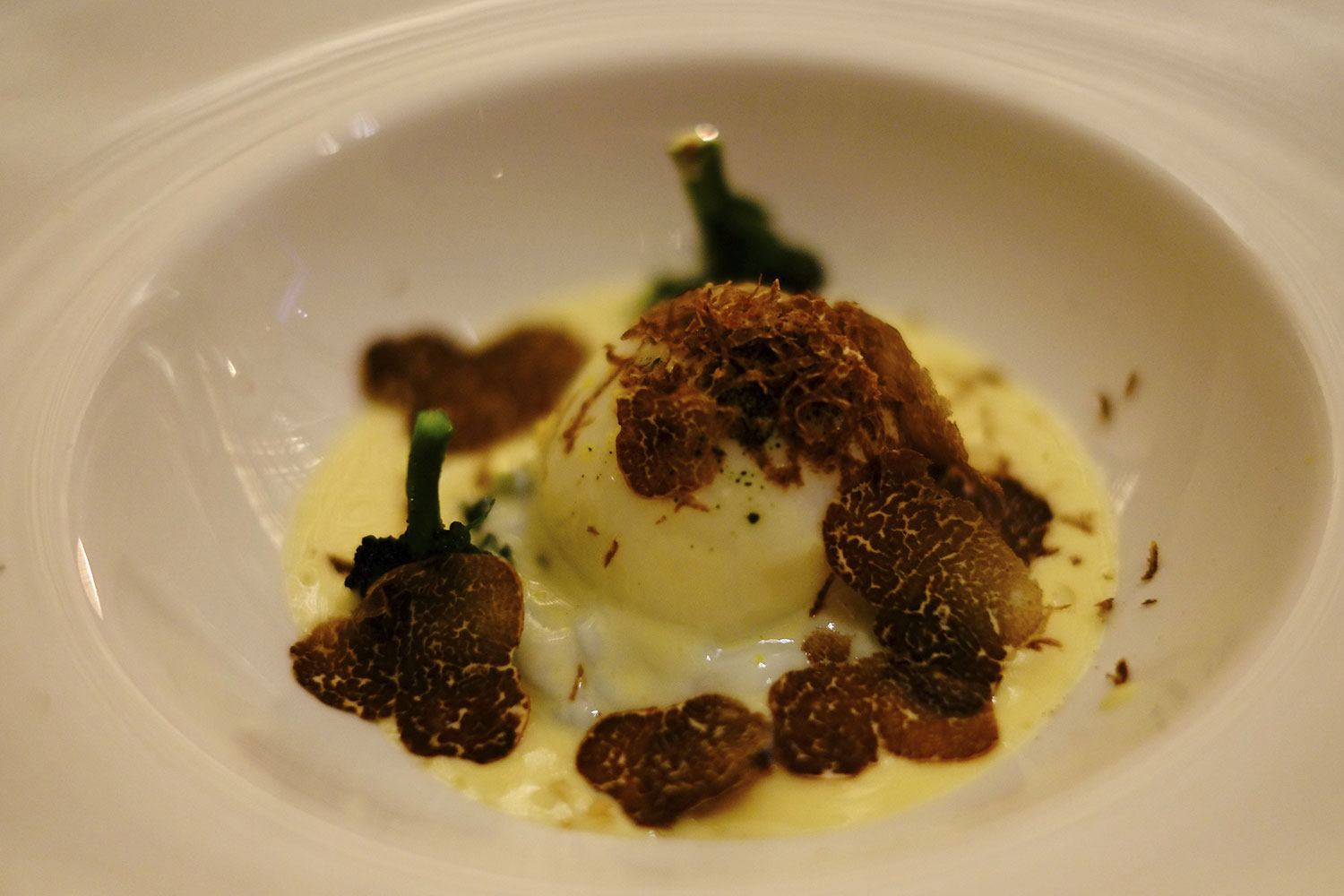 My dining companions all seemed to be enjoying the food as well, mostly empty plates taken away.  Our talk stretched to beyond the table offerings and what else you could do in Ardmore and its environs.  A bracing cliff top walk was one.  Jim Lane a local historian and charming character can guide you through the history of the area with tales of how St. Declan an Irishman on his way to Rome for religious education passed St. Patrick an Englishman on his way back from Rome.  One wonders who would have been the patron saint of Ireland if the order had been reversed.

A hush descended on the table as a series of white cloched plates arrived, in unison they were lifted and oak smoke wafted away to reveal Salmon with pickled vegetables and horseradish, architectural like a small city.  The neat conjuring trick had a purpose, the cloches were of course clear glass and the white oak smoke had gently infused the food giving a different dimension.  Great theatre and I felt I had a front row seat.

All these courses were accompanied by chosen wines most of which worked.  Later on, a dessert wine didn’t quite hit the spot for me but a Pinot Noir from Firesteed, Oregon USA 2009 was really wonderful with the rose veal, black cabbage and morels.  The price for the tasting menu is a very reasonable €145 with wine and €95 without.  They also have an a la carte option which is €68 for three courses.

There is plenty to do as a family here as well, a local company Ardmore Adventures can take your children off your hands from 10 am until 3pm and teach them surfing, kayaking, snorkelling and climbing.  This would give you a chance to enjoy a spa treatment or indeed a very long lunch.

The end of the tunnel was in sight, just three courses left, all of them dessert.  This was a mixed bag for me, firstly we had apple made in little balls, cream and edible gold.  It sat in a round bowl and had a crème brulee quality.  This was outstanding in taste, presentation and sheer verve, the flavours punching through.  Next was a rhubarb cooked many ways and textures, some honey and fromage frais.  This was a disappointment as all the taste I could find was sour and bitter, others around the table enjoyed it more.  It might have been the order in which they came?  Had it arrived before the apple it may have worked better for me.  Finally there was show stopping dark chocolate pudding with caramel and sea salt, blood orange coulis and edible silver leaf.  Excellent on all levels, very powerful chocolate hit balanced by salty caramel. 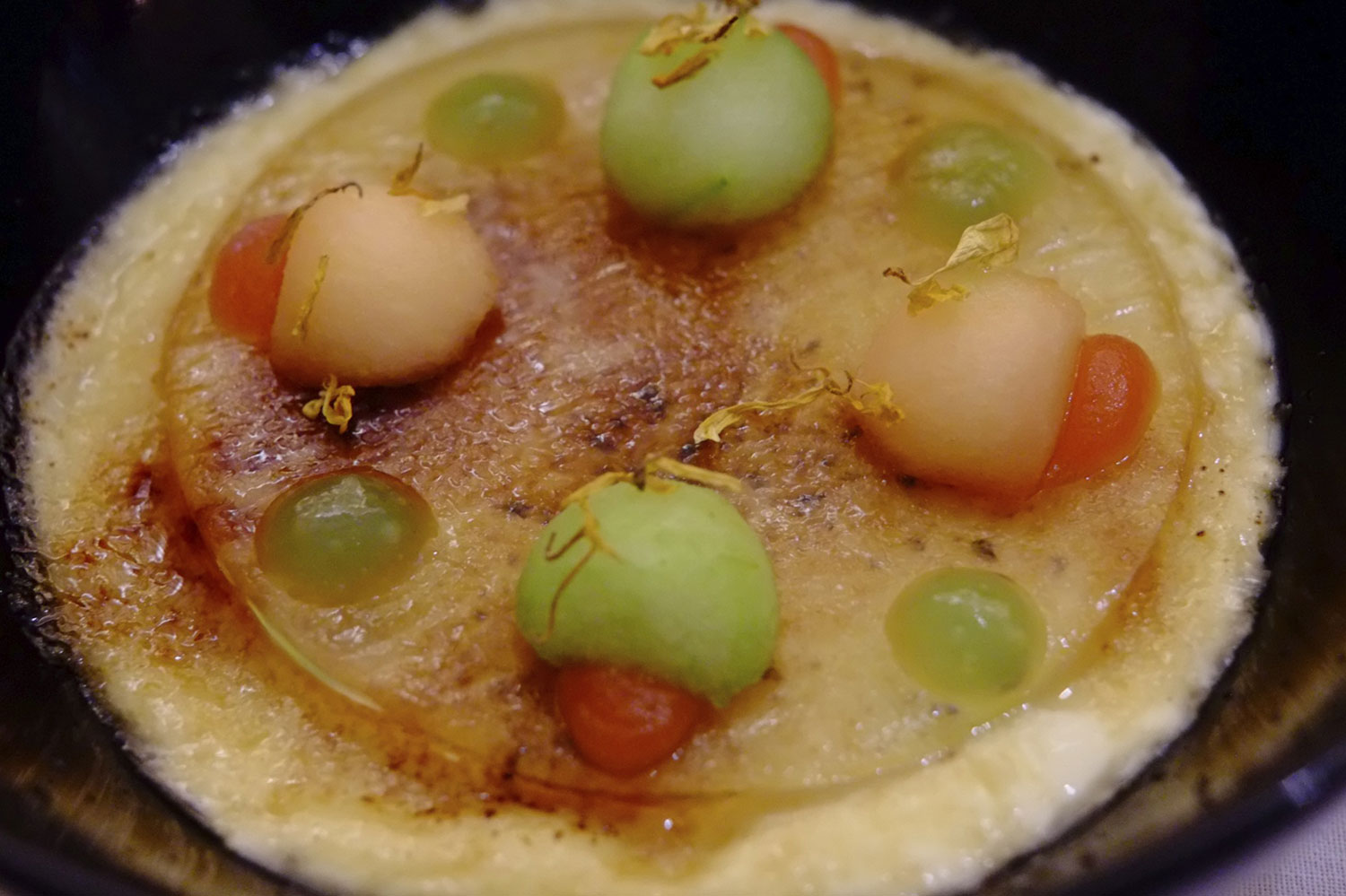 There were other bits and bobs I have failed to mention simply because there isn’t the space here.  But please believe me, it was a great adventure in Irish/Dutch food that is worth the journey.  It’s interesting to ponder that most of the great 17th century Dutch masters were created in around 100 year period and yet Martijn Kajuiter has managed to create his in around five.  Food for thought and a feast for the eyes.   Go and discover the wilds of Ireland and in the process enjoy an unforgettable meal.