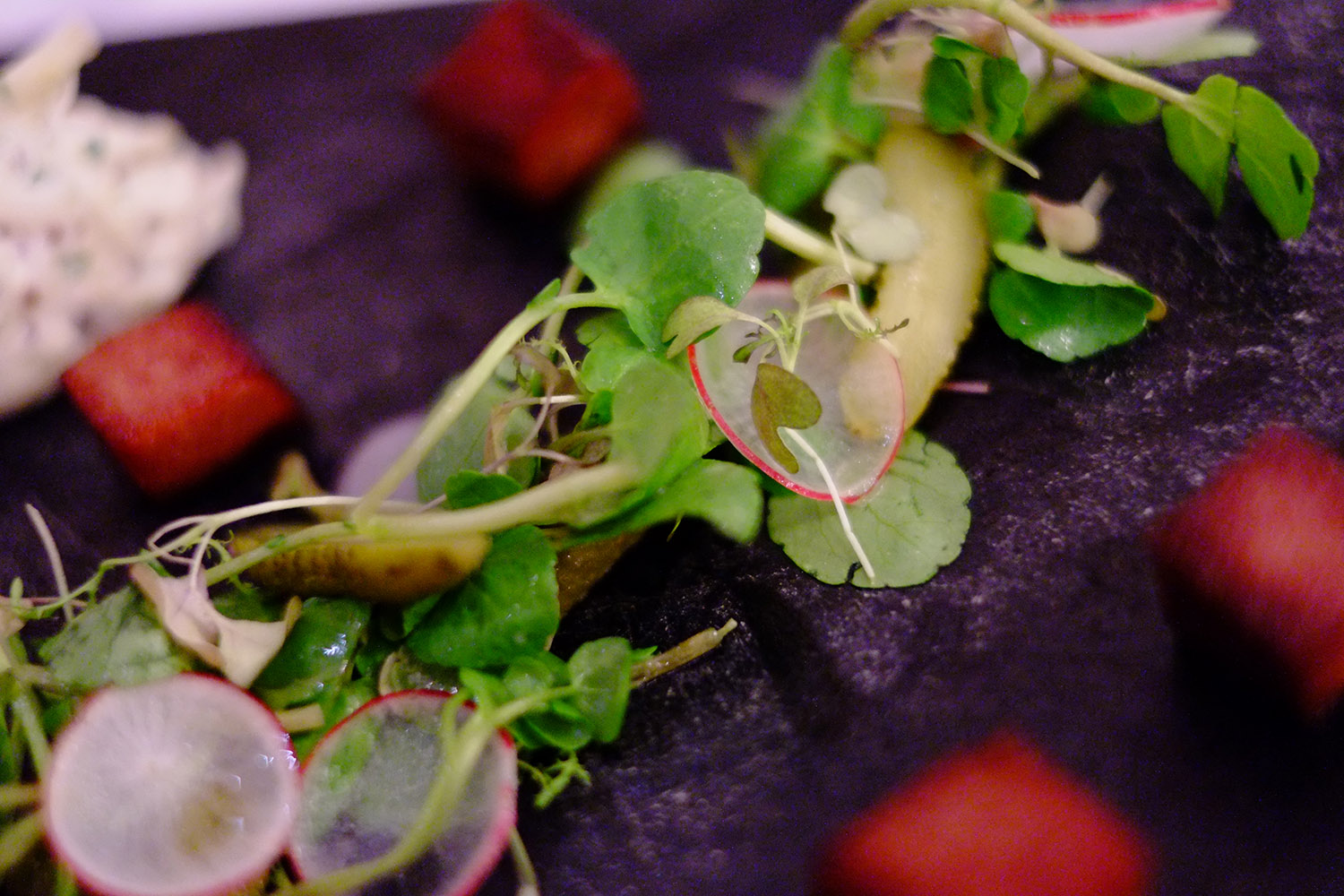 Clinging to the rocks on the edge of one of the world’s largest natural harbours sits The Greenbank Hotel.  A Falmouth institution, there has been building on this site since 1640, first it was a private house, then an inn and pub eventually a hotel.  It’s changed its name many times but the current appellation stuck some 150 years ago.  Kenneth Grahame stayed for a long summer in 1907 where he wrote letters to his young son, which became the basis of his book Wind in the Willows, published a year later.

So, to the food, well I’d like to start with the food but I have decided to start with a bit of topographical criticism.  You enter a grand foyer and have a couple of options.  The superb bar which has a terrace, high ceilings and a pleasing hexagonal shape should be made the restaurant and the long thin restaurant with a low ceiling should be made the bar.  There is no reason why this shouldn’t be done and it would improve the dining no end.  A long thin bar looking out across the sea would also be an improvement for drinkers.  Nothing major just a simple remapping of the layout.

Like Ratty the food here is cultured, relaxed and friendly in its approach.  The head chef Fiona Were is a New Zealander who landed on these shores over ten years ago and has made quite a name for herself in Cornwall.  Self styled forager and hen keeper she is passionate about local quality produce.  Our starters had an international feel but were made from Cornish produce.  There were vegetable sticks with smoked paprika humus, which came from the adventurous children’s menu.  It might be a touch too spicy for some little ones but a healthy option.  The sushi was a great hit with the boys, they had a ‘wasabi off’ which involved a series of dares that both of them regretted.  There is a little pearl of avocado coloured dynamite on each platter.  Be warned, it could be the undoing of many a man let alone child.  Soup of the day was a curious combination of beetroot and orange, which worked well and looked fabulously red.  I went for the prettiest plate, crispy cured ox tongue with celeriac remoulade, watercress, radish and cornichons.  This was very good with balanced and delicate flavours, it’s unusual to be able to taste watercress when radish is on the plate but this worked well.

What Mole would make of the mains is hard to know but if he did venture out from his spring cleaning he might enjoy what we had and adapt to this new way of life.  The Terras Farm duck breast, borek, parsnip, quince, kale and sultanas was an immediate hit with my eldest son.  He loves duck and this was some of the finest he has tasted.  It was pink and succulent and full of flavour. The kale was also a welcome addition.  A sirloin steak was of good size and arrived with a goblet of melted garlic butter.  It had a fine length of taste and had hand cut chips and salad, I think the salad is probably surplus to requirements though.  The slow roast Primrose Herd pork belly with sweet and sour red cabbage, artichokes, pigs ears (just tiny slithers) and cider jus was just crispy enough on the outside to know what you were eating but thin enough to ensure to delay a visit to the dentist.  The flesh was nice and soft and the cabbage gave it a sense of purpose.  A winner.

Of course a mention of Toad could not be left out and where better that at the desserts to do that?  Fiona has clearly had fun devising these.  As with all her cooking there is never just one flavour to contemplate.           Baked Alaska, sugared almonds and blackberries came with a gorgeous shot of sweet damson gin.  My Lemoncello parfait had a citrus salad (with something very crispy in the middle which was lovely) and a passion fruit and lemon meringue.  This was sweet and over the top and just the sort of thing to find in the fridge at Toad Hall and I ate it all.  An unusual cardamom and ginger crème brulee excited the taste buds of a fourteen year old boy.  Quite a grown up taste made accessible.  Very clever.

A meal here is pretty reasonable for the quality of cooking and ingredients, the starters are up to £8 and the mains hover in the late teens.  Puddings were all £6.50.

I would be derelict in my duties if I didn’t mention the spectacular view you get from the restaurant or bar at The Greenbank Hotel (even better if they were swapped around).  You could easily spend hours watching the local tiny ferry service going about its business or a weekender attending to the rigging on his yacht.

So as I watched the sun disappear and saw the twinkling lights of Flushing glimmer into life I couldn’t help think that there really isn’t anything better than watching people ‘simply messing about in boats’.