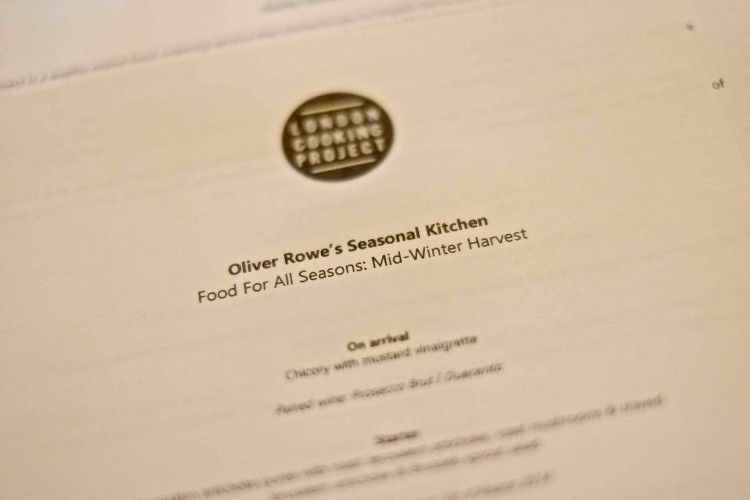 All over the country people are gathering in secret locations, frequently they don’t know each other but they have at least one thing in common – The enjoyment of food. The cult of the supper club has been around for a few years so I thought it was about time I tried one out for myself. 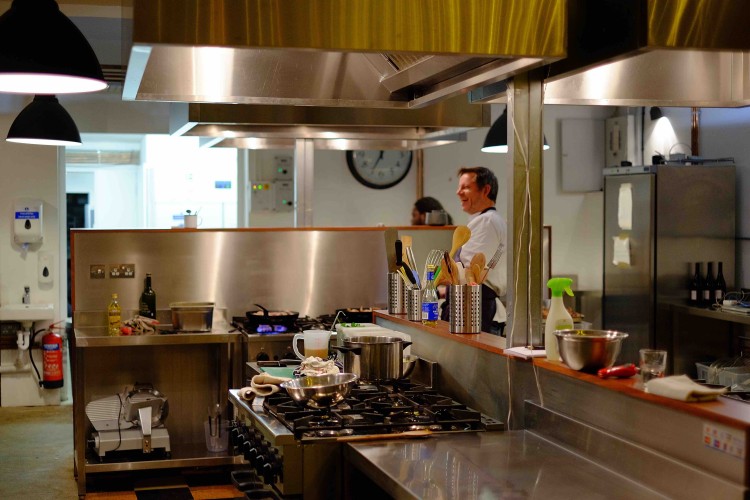 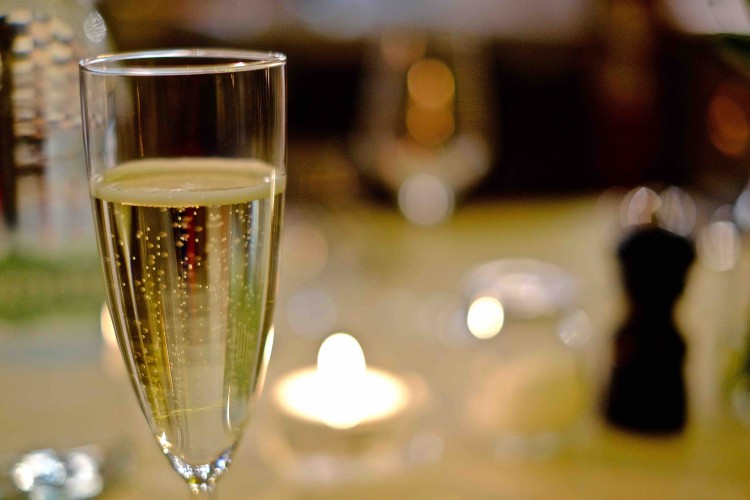 In a large kitchen dining room just of Battersea Bridge Road I found myself in a room with about 35 strangers all there to taste chef Oliver Rowe’s seasonal menu. Oliver introduced himself and the food at the beginning of the evening as waiting staff topped up glasses and served plates of starters. You can bring your own drink or have matched wines with each course, which you pay a little extra for. 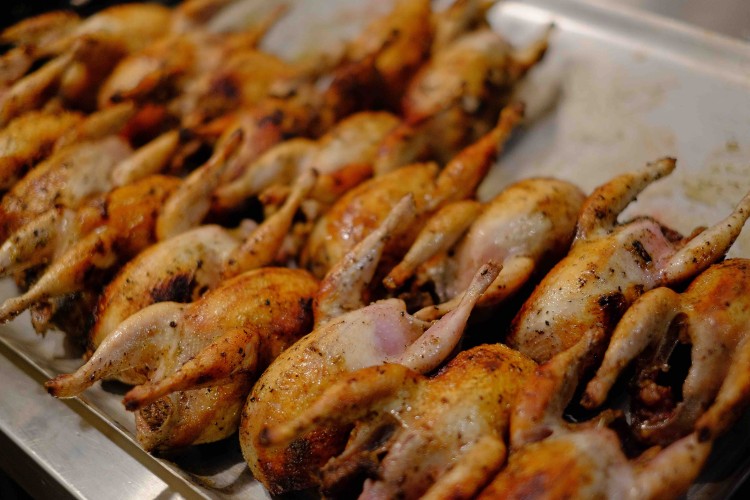 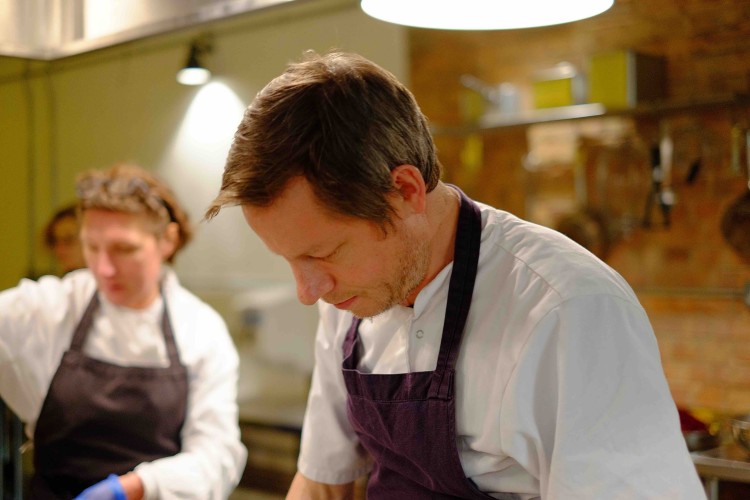 As I waited for the first course to arrive I started talking to my dining companions. I quickly realised that two of them were Oliver’s parents! Annabel and Beverley were charm itself (just like their son) and refrained from blowing trumpets keeping a dignity throughout. Also either side of me were Gail and John down from Scotland for a wee holiday. As they talked about the week they had enjoyed seeing shows and exploring London I felt a little like the filling in a Hogmanay sandwich. 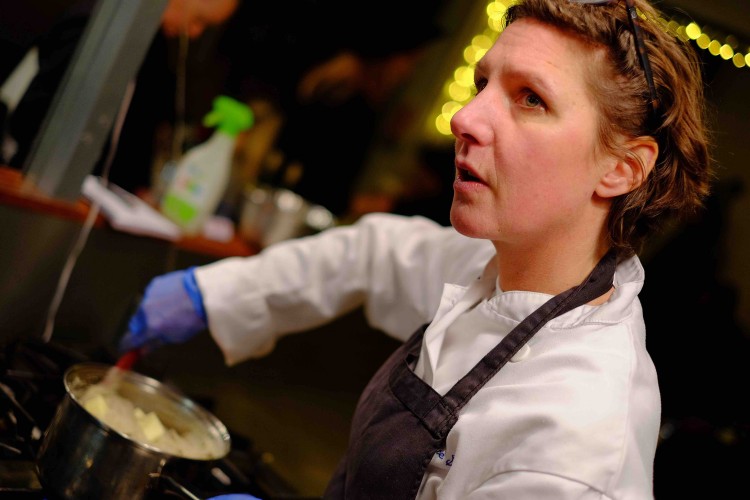 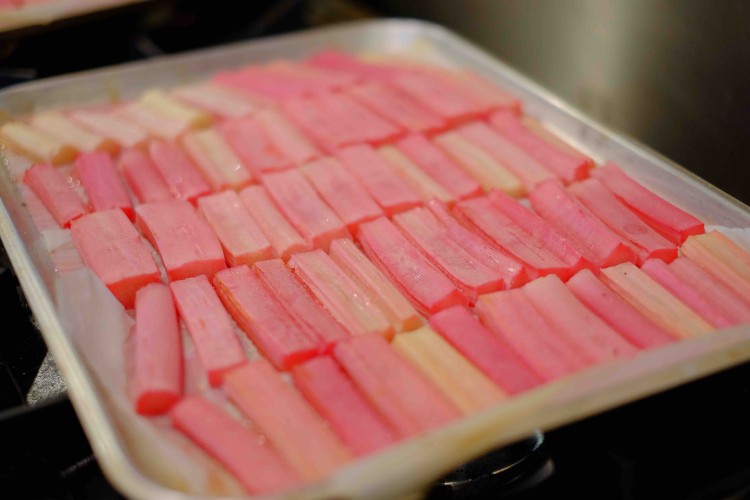 The first bit of food was already on the table when we arrived, chicory with mustard vinaigrette. The chicory was whole so we all had to tear bits off – a good icebreaker. The first course was an extremely tasty Jerusalem artichoke puree with whole Jerusalem artichoke, roasted mushrooms and a Brussels sprout salad, all very good so far. 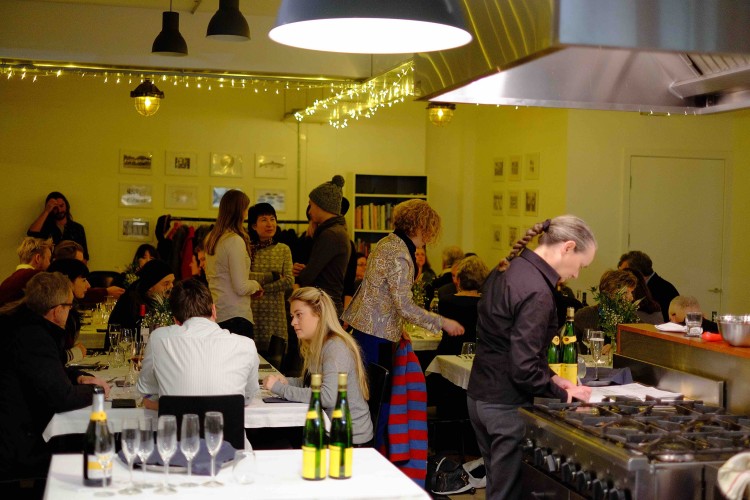 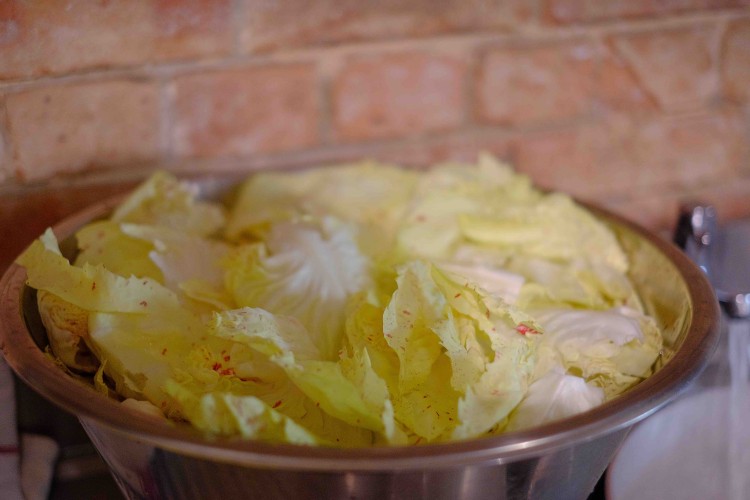 Gail and John were having their last night in London and were determined to enjoy themselves. They had done it all over the last week (I wish my life was like theirs) saw War Horse, had lunch at The Ivy, took in a couple of bands in Kentish Town and became enchanted by the idea of a supper club so were first timers like me. 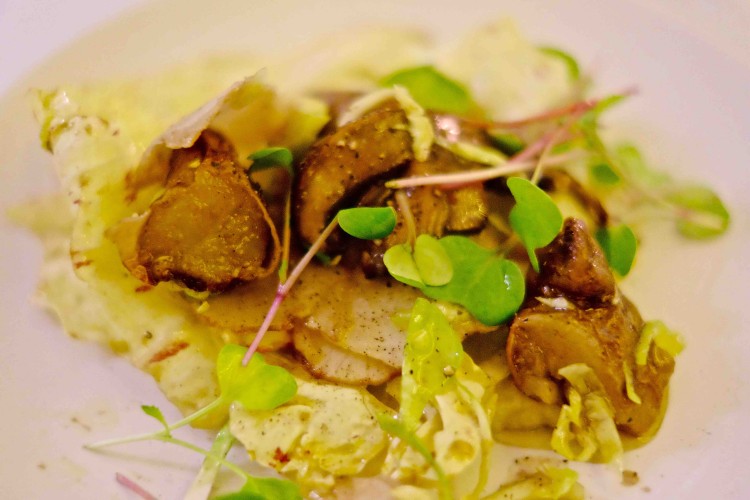 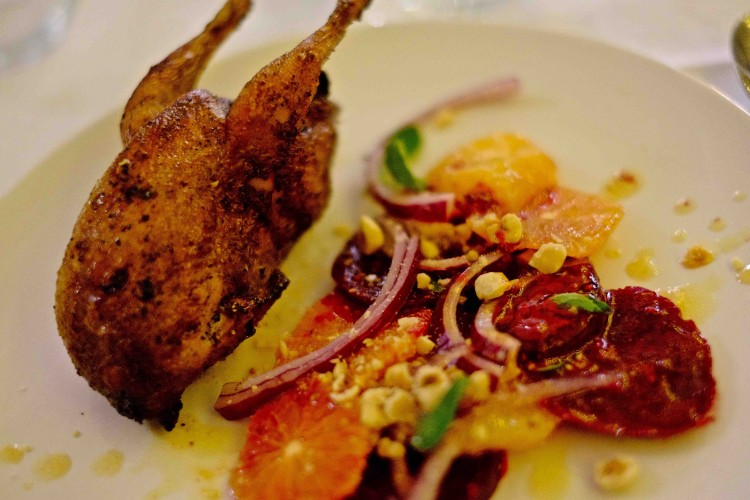 The main was a simple roast quail with blood orange, beetroot and hazelnut salad. The quail were young and well cooked but it still takes a bit of effort to remove the meat (some of us resorted to using our fingerss, I think we got away with it)! Along with the bird were new potatoes and purple sprouting broccoli. 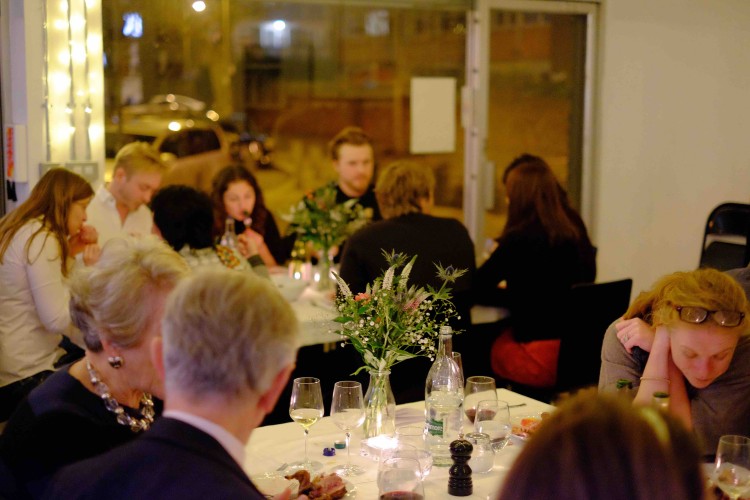 The wine was flowing and the conversation great. It had the feeling of being and a distant relative’s wedding. Good fun, best behavior and I had no control over the menu. Sometimes it’s just great to roll with it. As a food writer I scrutinize menus for choice and balance but on this occasion I couldn’t and it was a pleasure to have that ‘burden’ taken away from me (well, for one evening anyway.) 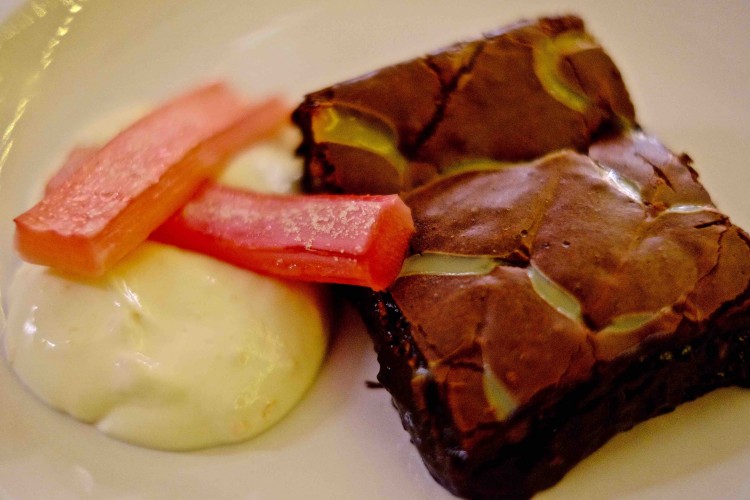 Dessert was a warm chocolate caramel brownie with Clementine cream, which was outstanding. I really enjoyed the citrus tang of the cream and the brownie was warm and heavenly. As I chatted to Gail at the end of the evening we concluded that the big surprise (and enjoyment) of the evening was the mix of guests. Thrown together not knowing who you might be sitting with is great fun. And don’t think for a moment that they will be full of young Shoreditch dudes with beards. The demographic was wide and varied. Senior citizens mixed with the young and not so young perfectly. 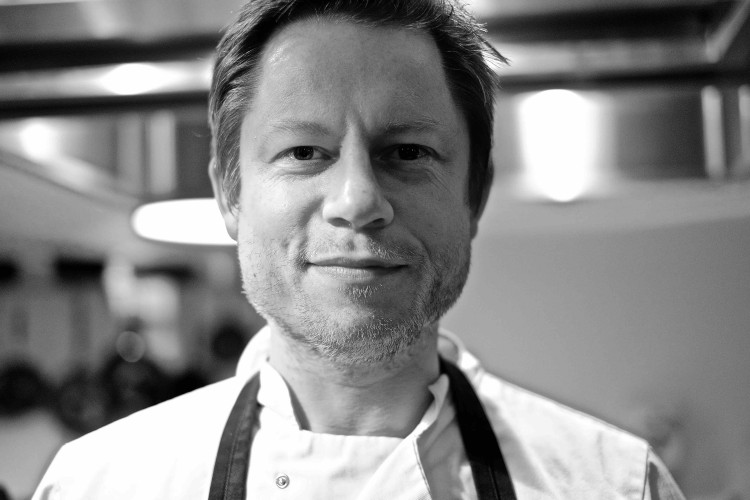 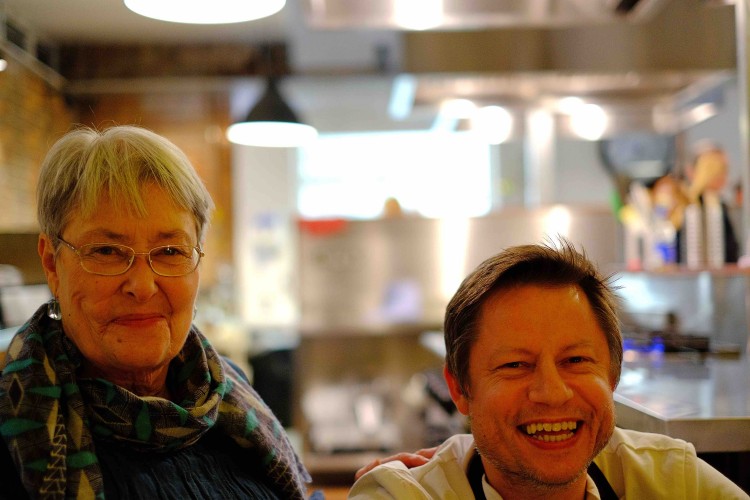 This is a place to watch, The London Cooking Project has events like this throughout the year and at least once a month (well at least when Oliver is cooking) it’s worth turning up for. He’s passionate about all the right things, provenance, food miles and taste. What more could you ask for? Give manager Emma Bebb a call she will let you know of up and coming events and chefs to look out for.